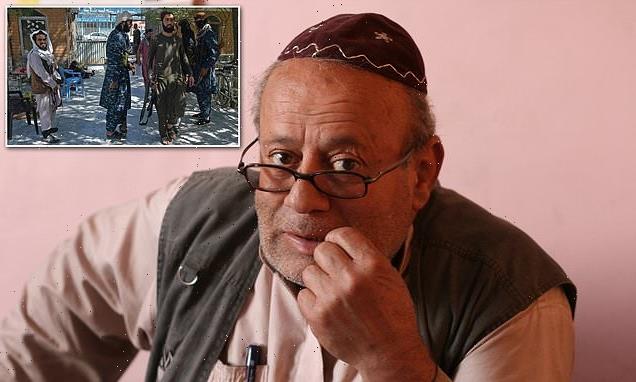 Afghanistan’s last Jew, 62, is set to travel to America after fleeing over fears that ISIS-K will kill him after the Taliban takeover

The last Jew in Afghanistan who was smuggled out of the country could be set to move to the US following the Taliban’s takeover.

Zebulon Simantov, 62, had initially refused to leave Afghanistan, despite the Taliban’s complete takeover, but he was eventually convinced to leave with a rescue team organised by Israeli-American businessman Moti Kahana.

After agreeing to leave Afghanistan, Simantov was transported to a ‘neighbouring country’ in the first week in September, alongside a number of other vulnerable Afghans.

Simantov now remains in a hotel while Kahana’s backers attempt to sort out the necessary paperwork to fly him out to the US, according to the NY Post.

However, the NY Post also reports that Simantov could also be resettled in Israel. 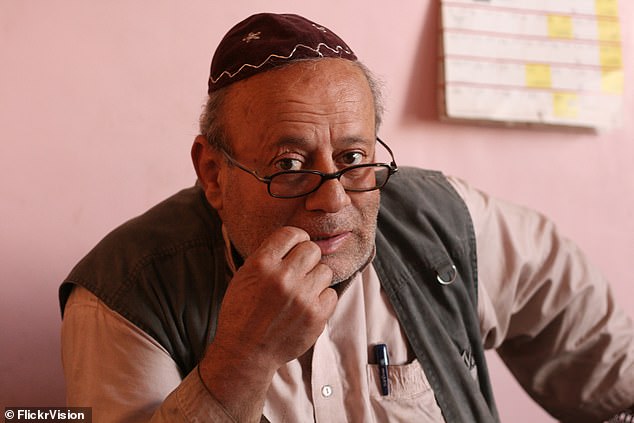 The last Jew in Afghanistan, Zebulon Simantov, 62, (pictured), who was smuggled out of the country could be set to move to the US following the Taliban’s takeover 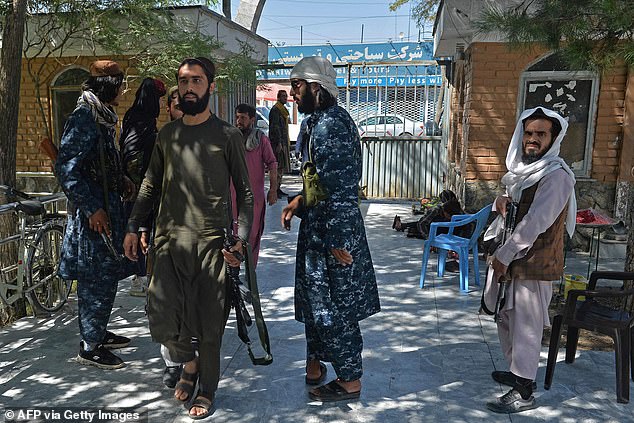 After agreeing to leave Afghanistan, Simantov was transported to a ‘neighbouring country’ in the first week in September, alongside a number of other vulnerable Afghans. Simantov now remains in a hotel while Kahana’s backers attempt to sort out the necessary paperwork to fly him out to the US. Pictured: Taliban fighters outside of the Wazir Akbar Khan mosque in Kabul on September 17, 2021

Speaking to the outlet, Kahana said: ‘I explained to Zebulon, “It’s not the Taliban to worry about. They may even protect you. But [ISIS] and Al-Qaeda types will try and kidnap you and they will try and ransom you. Or they will just chop your head off because they need the media attention”.’

Simentov lived in a dilapidated synagogue in Kabul, enduring decades of war as the country’s centuries-old Jewish community rapidly dwindled.

But the Taliban takeover last month and withdrawal of US troops left Simentov fearing for his safety.

Mr Simentov, along with 29 neighbours have now been evacuated to a neighbouring country, according to Moti Kahana, an Israeli-American businessman who runs a private security group that organised the evacuation.

Mr Kahana said Mr Simentov, who lived under the Taliban’s previous regime, was not concerned about them, but had been warned that he was at risk of being kidnapped by ISIS-K, an Islamic State affiliate.

The group was behind devastating twin bomb attacks on Kabul airport last month, which killed at least 180 people and injured more than 100 others. 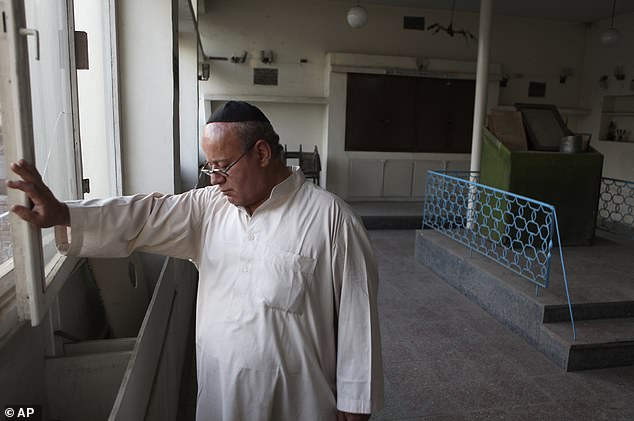 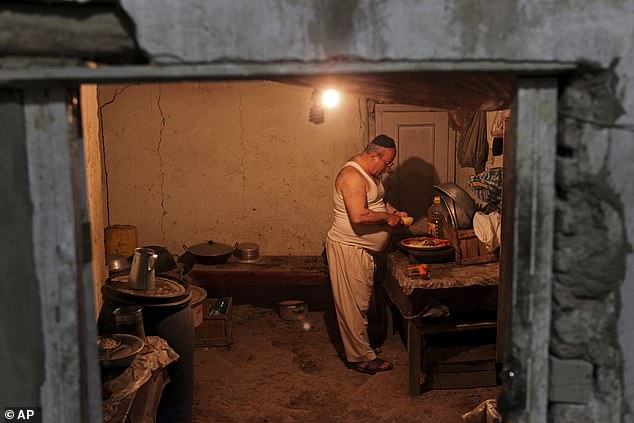 The Taliban takeover last month and withdrawal of US troops left Simentov fearing for his safety, after being warned he could be targeted by the local ISIS affiliate [File photo] 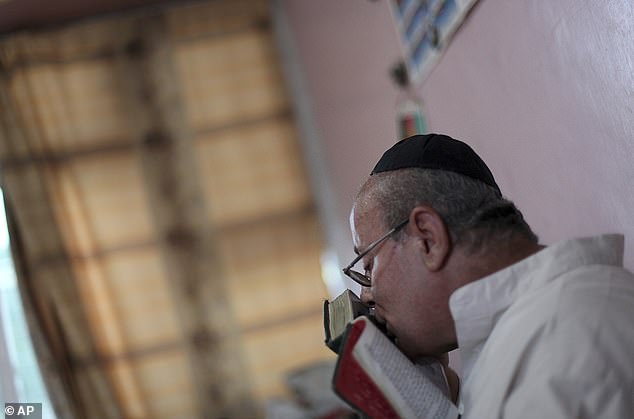 However, Mr Simentov did express concern about the Taliban in an interview with AFP earlier this year in which he discussed his desire to leave Afghanistan if the Taliban returned to power.

‘Why should I stay? They call me an infidel,’ Mr Simentov said.

‘I’m the last, the only Jew in Afghanistan… It could get worse for me here. I have decided to leave for Israel if the Taliban returns.’

Mr Kahana told the Associated Press that neighbours of Mr Simentov also pressed him to leave so that their children could join him on the bus out.

Israel’s Kan public broadcaster aired footage of the evacuation, showing a bus full of people travelling across what appeared to be Afghanistan, with all the passengers’ faces blurred except for Mr Simentov’s.

They joined an exodus of tens of thousands of Afghans who have fled the country since the Taliban swept across the country last month.

The US and its allies organised a massive airlift in the closing days of the 20-year-war, but officials acknowledged that up to 200 American citizens, as well as thousands of Afghans who had aided the war effort, were left behind.

Mr Kahana said his group is reaching out to US and Israeli authorities to find a permanent home for Mr Simentov, whose estranged wife and children live in Israel.

For years, Mr Simentov refused to grant his wife a divorce under Jewish law, which could open him up to legal repercussions in Israel.

Mr Kahana said he persuaded him to grant the divorce and has drawn up the paperwork.

‘That was two weeks of being a shrink, a psychiatrist, talking to him like 10 times a day, and his neighbour at the same time to translate,’ Mr Kahana said. 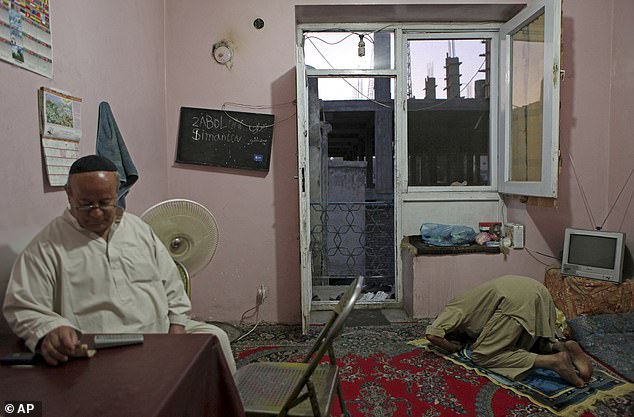 In the late 19th century, Afghanistan was home to some 40,000 Jews, many of them Persian Jews who had fled forced conversion in neighbouring Iran. Pictured: Mr Simentov (left) at home in Kabul in 2009, his Muslim friend Shirgui Amiri prays

Hebrew manuscripts found in caves in northern Afghanistan indicate a thriving Jewish community existed there at least 1,000 years ago.

In the late 19th century, Afghanistan was home to some 40,000 Jews, many of them Persian Jews who had fled forced conversion in neighbouring Iran.

The community’s decline began with an exodus to Israel after its creation in 1948.

For several years he shared the synagogue building with the country’s only other Jew, Isaak Levi, but they despised each other and argued during the Taliban’s previous rule from 1996 to 2001.

At one point, Mr Levi accused Mr Simentov of theft and spying, and Mr Simentov countered by accusing Mr Levi of renting rooms to prostitutes, an allegation he denied, The New York Times reported in 2002.

The Taliban arrested both men and beat them, confiscating the synagogue’s ancient Torah scroll, which went missing after the Taliban were driven from power in the 2001 US-led invasion.

Mr Simentov has said the Taliban also tore up books and broke menorahs during this incident and demanded he convert to Islam, which he did not.

Both Mr Simentov and Mr Levi accused each other of stealing, selling or else being responsible for the loss of the scroll at various times. 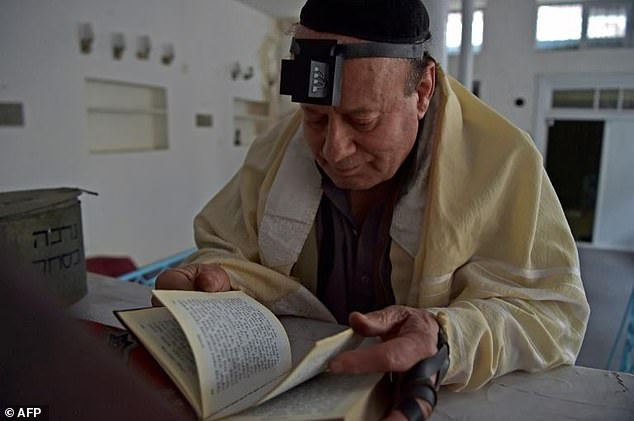 When his 80-year-old housemate died in 2005, Mr Simentov said he was happy to be rid of him.

‘He was a very bad man who tried to get me killed,’ Simentov told the New York Times that year. ‘Now I am the Jew here; I am the boss.’

Reporters who visited Mr Simentov over the years, and paid the exorbitant fees he charged for interviews, found a portly man fond of whisky, who kept a pet partridge and watched Afghan TV.

He observed Jewish dietary restrictions and ran a kebab shop, but later lived off donations from Jews abroad and handouts from neighbours, according to AFP.

He continues to mark the Jewish new year Rosh Hashanah and Yom Kippur holidays at the synagogue – sometimes even accompanied by Muslim friends.

‘If it weren’t for me, the synagogue would have been sold 10, 20 times by now,’ he told AFP earlier this year before the Taliban takeover.

Born in the western city of Herat, once home to tens of thousands of Jews, in 1959. Four synagogues are still standing in the city, a testament to the now vanished community.

Mr Simentov moved to Kabul during the Soviet invasion for the capital’s then relative stability. He has always insisted he did not want to leave his homeland. 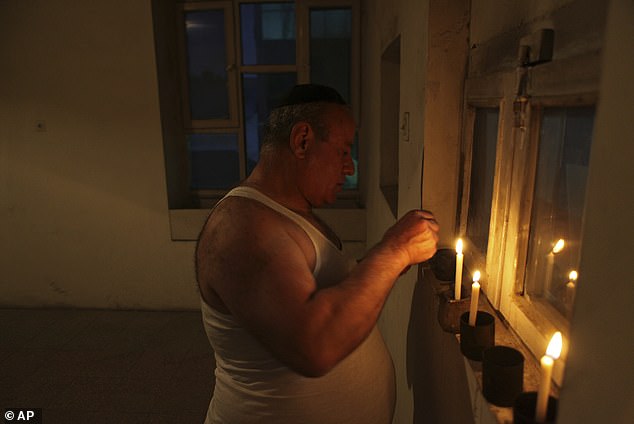 Born in the western city of Herat in 1959, Mr Simentov (pictured) always insisted he did not want to leave his homeland [File photo]

He has said he took up residence in the synagogue after returning from Turkmenistan in 1992 to export rugs and copper dishes.

Samir Khan, a neighbour who runs a small grocery store and had known Mr Simentov for the last 10 years, said he disappeared about a week and a half ago.

Mr Khan said he only learned of Mr Simentov’s departure when he saw it on social media.

The Taliban, like other Islamist militant groups, are hostile to Israel and religious minorities, but tolerated Afghanistan’s minuscule Jewish community during their previous reign.

Aside from during the feud between him and Mr Levi, the only other time they came knocking was when they noticed that Muslim women in burkas could often be seen visiting Mr Levi, the Associated Press reported.

When they briefly arrested Mr Levi, he explained that he had a business selling amulets to women who wanted to become pregnant with sons or who were opposed to their husbands taking other wives, as allowed under Islamic law.

The Taliban released him.

Earlier this year, Mr Simentov told AFP that he had been thrown in prison by the Taliban four times, and told the New York Times in 2005 that once was because Mr Levi had told the Taliban he was an Israeli spy.