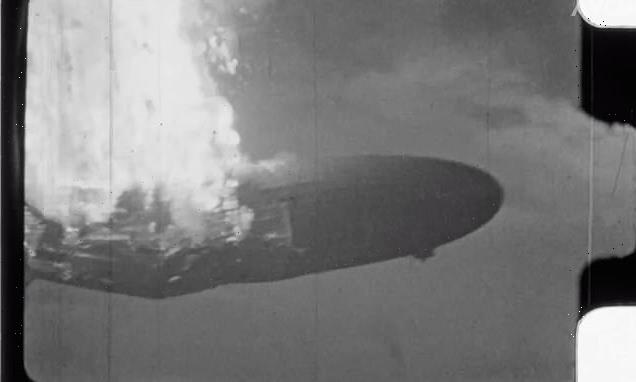 It was a horrifying disaster which was caught on film and shown on newsreels across the world.

The hydrogen-filled Hindenburg airship exploded in New Jersey on May 3, 1937 after travelling nearly 4,000 miles across the Atlantic Ocean from Frankfurt, Germany.

To this day, experts are still unsure what caused the accident, which killed 35 passengers and crew.

Existing newsreel footage shows a close-up view of the airship as it burned while falling from the sky.

Now, incredible new video shot by an amateur photographer from a different angle has provided new clues about what might have happened.

The clip, filmed on a Cine-Kodak 8, Model 20 camera, was shot by Harold Schenck, whose nephew Bob Schenck features in a new PBS documentary revealing the unseen amateur video for the first time.

Hindenburg: The New Evidence, which is available to US viewers this evening, reveals how Schenck was standing in a different place to assembled members of the press, meaning he was able to get a wider view of the ship.

The film was ignored in the initial investigation into the disaster and only came to light when Bob showed it to aviation historian Dan Grossman, who features in the new show.

Crucially, the video shows the moment the airship’s landing ropes were lowered, four minutes before the craft – which is believed to have been leaking hydrogen – exploded.

This adds new weight to the theory that the ropes conducted enough static electricity to cause a spark which ignited the leaking gas.

Schenck’s film also gives a new wide view of the horrifying moment after the ship exploded. It is seen in a ball of flame as it falls to the ground in front of horrified onlookers. 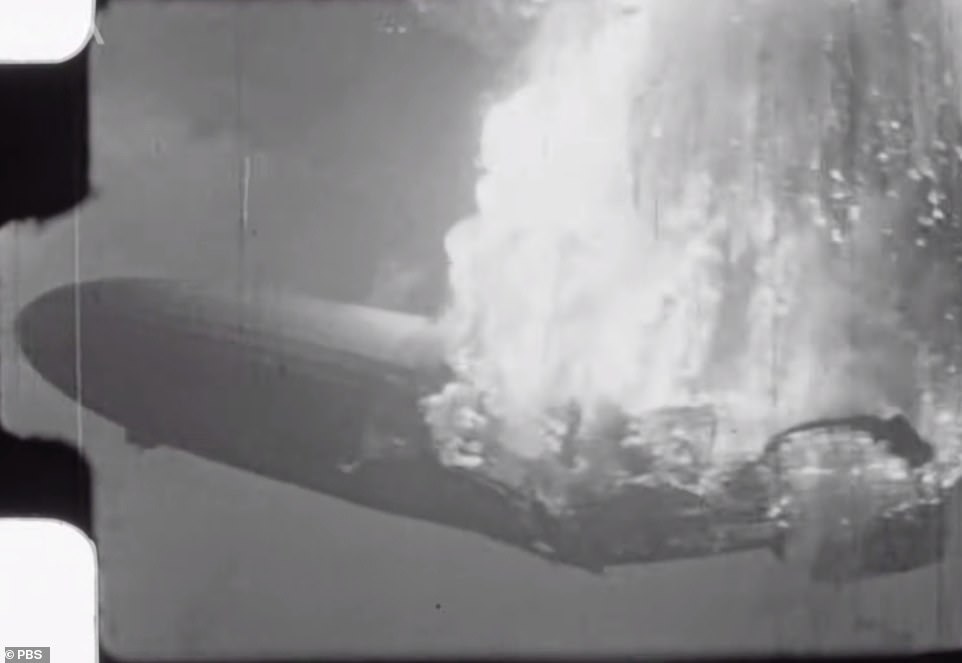 The hydrogen-filled Hindenburg airship exploded in New Jersey on May 3, 1937 after travelling nearly 4,000 miles across the Atlantic Ocean from Frankfurt, Germany. Now, incredible new video shot by amateur photographer Harold Schenck from a different angle has provided new clues about what might have happened 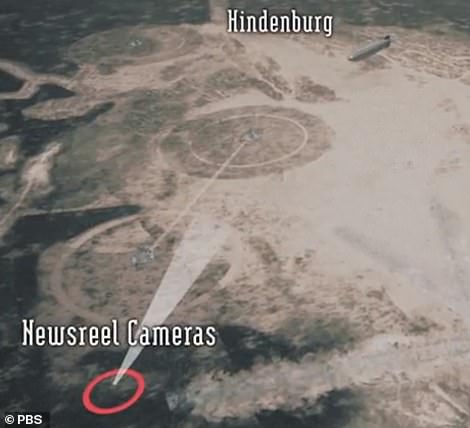 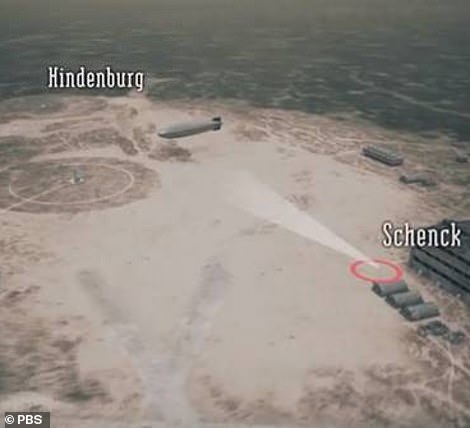 Schenck’s film starts earlier and is shot from an entirely different angle to the famous newsreel footage. The above graphic, revealed in the new programme, shows how Schenck was standing so that he could see the Hindenburg from the side, as opposed to looking at just its front

Before the disaster, the LZ-129 Hindenburg – with swastikas emblazoned on it – had made 63 successful trips and was the jewel in the crown of Nazi Germany’s airship project.

At the time of its completion in 1936, the Hindenburg was the largest aircraft ever built.

From March 1936 – just over three years before the start of the Second World War – the ship ferried thousands of passengers across the Atlantic.

She was also used for propaganda purposes during the 1936 Berlin Olympic Games.

Her final flight began on May 3, 1937, when Captain Max Pruss took off from Frankfurt.

After arriving in the US three days later, the airship was cleared at around 7pm on May 6 for its final approach at the Naval Air Station in Lakehurst, New Jersey.

The landing had been delayed to avoid a series of thunderstorms passing over Lakehurst. At 7.21, landing ropes were dropped from the airship to the ground.

Then, four minutes later, the Hindenburg burst into flames and fell to the ground in just over 30 seconds.

Of 36 passengers on board, 13 of them lost their lives. A further 22 crew died out of the 61 members who started the journey.

American radio journalist Herbert Morrison’s dramatic live report – in which he tearfully uttered the words ‘Oh the humanity!’ as the ship exploded in front of him – became a symbol of the disaster.

The official investigations into what happened – one carried out by US officials and the other by German counterparts – failed to determine the cause of the accident. 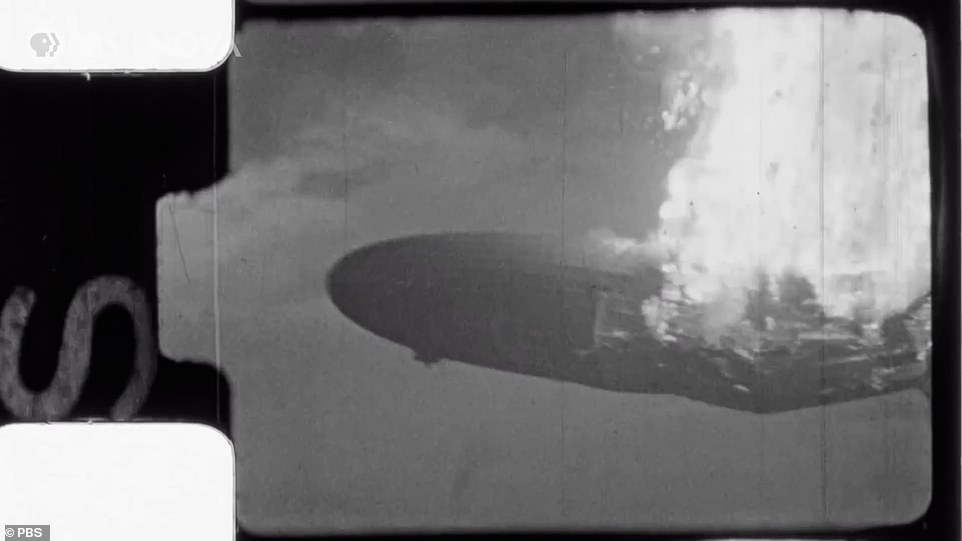 The clip was filmed on a Cine-Kodak 8, Model 20 camera. Harold’s nephew Bob Schenck features in a new PBS documentary revealing the unseen amateur video for the first time

The footage gives a new view of the ship as it burned in the sky before plummeting to the ground below, killing 35 passengers and crew 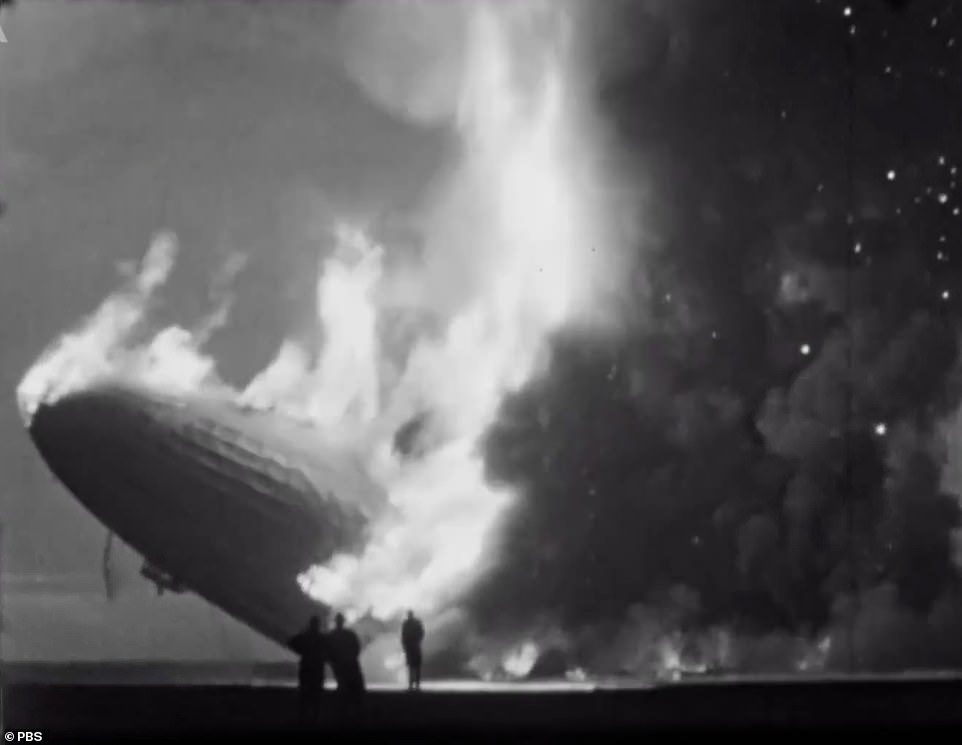 Once the airship is on the floor, spectators can be sen watching in horror as the Hindenburg continues to burn 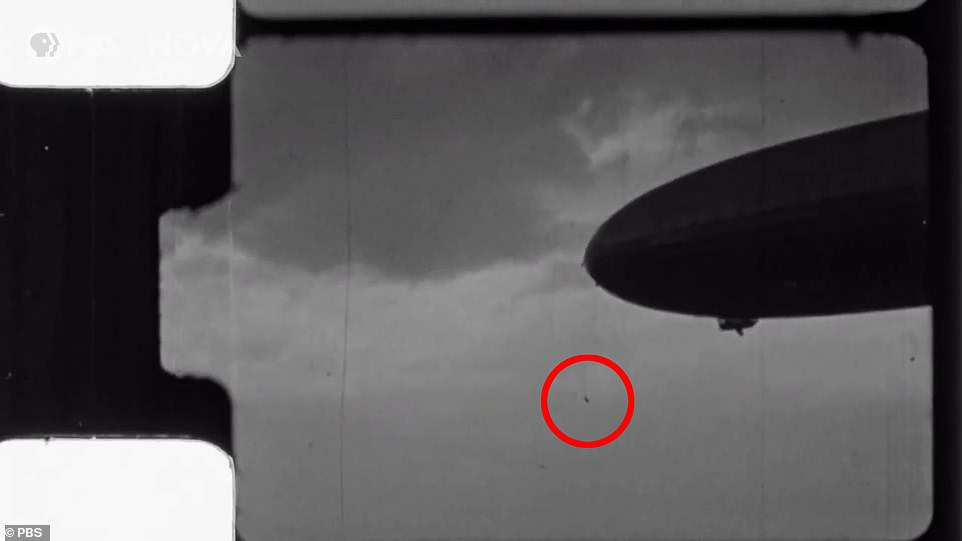 Crucially, the video shows the moment the airship’s landing ropes were lowered, four minutes before the craft – which is believed to have been leaking hydrogen – exploded. This adds new weight to the theory that the ropes conducted enough static electricity to cause a spark which ignited the leaking gas 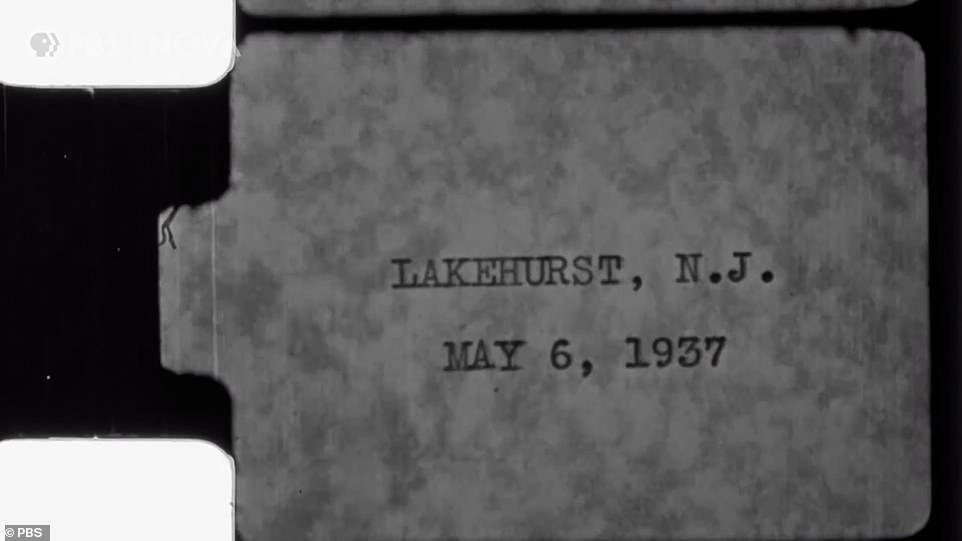 Bob Schenck revealed in the show that the camera originally belonged to his father, but he was unable to go to watch the Hindenburg land because he was working. Instead, Bob’s uncle Harold went in his place to film the airship’s arrival 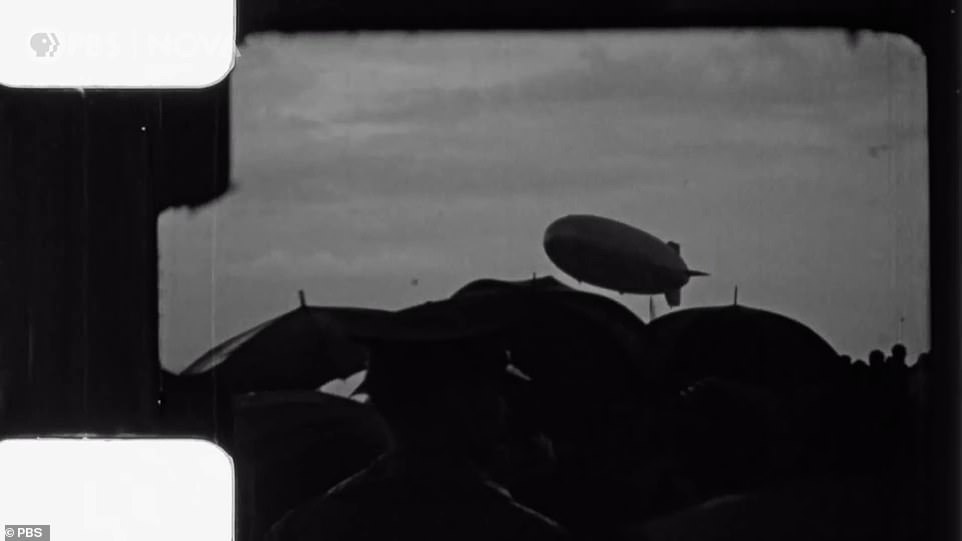 The film starts earlier and is shot from an entirely different angle to the more famous films. Pictured: Spectators are seen in Schenck’s film standing beneath umbrellas as they watch the Hindenburg land

Grossman was at Lakehurst for the 75th anniversary of the disaster in 2012 when he was first made aware of the new footage.

So what caused the Hindenburg disaster?

German and American scientists believe the Hindenburg disaster was caused by static electricity, which built up after the ship flew into a thunderstorm.

The electricity in the air charged the iconic airship with static, while a broken wire or gas valve leaked hydrogen into the ventilation shafts.

When ground crew members ran to take the landing ropes they effectively ‘earthed’ the airship causing a spark.

The fire is believed to have started on the tail of the airship, igniting the leaking hydrogen.

The gas is highly flammable, which meant the fire spread throughout the ship in barely a minute.

There have been numerous disproved conspiracy theories about the Hindenburg, such as that there was a bomb on board or that fire started because of a the airship’s paint.

He says in tonight’s show: ‘A guy comes up to me and says, “I’ve got some film of the Hindenburg disaster you probably don’t really care, it was taken by my uncle, but if you want to see it I will show it to you.”

Bob revealed in the show that the camera originally belonged to his father, but he was unable to go to watch the Hindenburg land because he was working.

Instead, Bob’s uncle Harold went in his place to film the airship’s arrival.

The film starts earlier and is shot from an entirely different angle to the more famous films.

Bob says: ‘It was at the time publicly put out that he had it.

‘Nobody ever asked for it. There was plenty of footage taken by the news reels and nobody really cared I guess about angles.’

Because the roll of film only lasted two minutes, Schenck only recorded footage for a few seconds at a time.

It showed the crowd of spectators assembling, as well as the moment the airship passed over the hangar at Lakehurst.

The last thing Schenck filmed before the explosion was the landing lines being lowered to the ground four minutes earlier.

Bob added: ‘As it exploded, he had the camera at his side and it was a wind-up camera so he had the presence of mind to switch to switch on and pick it up at that moment.’

Unlike the famous footage – which shows only a close-up view of the front and underside of the airship as it burns – Schenck film reveals the nose and tail at the same time.

Schenck gained the different perspective because he was standing at an entirely different angle to the mass of photographers and other spectators.

It means experts can now examine a much wider view of the ship in its final moments.

After they verified the footage’s authenticity, Harris and Grossman sought the help of expert Konstantinos Giapis, a professor of chemical engineering.

He carried out experiments which added weight to the theory that the landing ropes may have created a build-up of static electricity.

There was a small air gap between the air ship’s skin and frame, and when it began to rain, the skin is thought to have become more conductive.

The four-minute gap between the ropes being dropped and the airship exploding gave enough time for the static charge to build up into a spark, Giapis’s tests suggested.

The show earlier reveals a chilling Kodak advert featuring a picture of the Hindenburg on an earlier flight. It bore the strapline: ‘Moments that make history – get them with a movie camera’.

The show’s executive producer Gary Tarpinian said: ‘Thanks to this stunning new footage, we were able to revive a cold case investigation surrounding one of the most iconic disasters of the 20th century.’

Writer Rushmoore DeNooyer: ‘For over 80 years, experts have debated how and why the fire began. 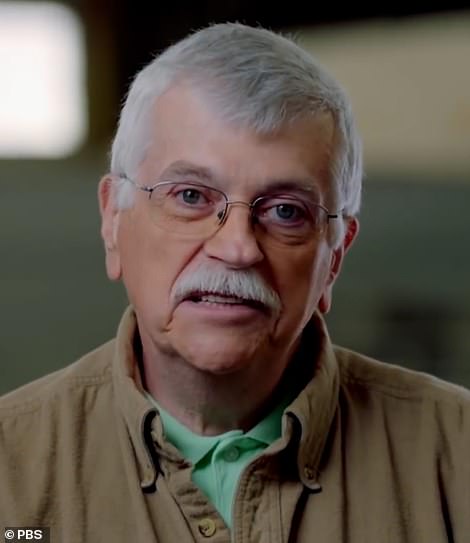 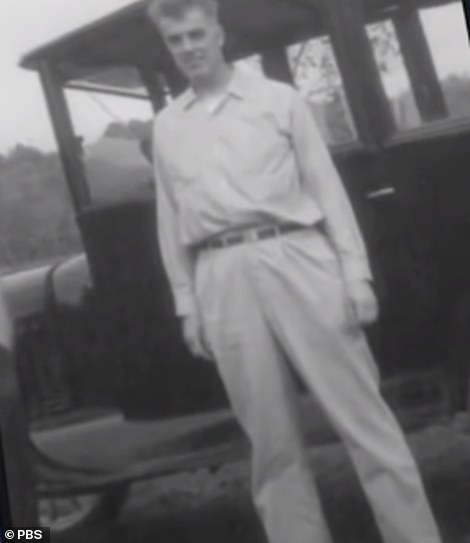 Bob Schenck (left) says in the new show that the existence of his uncle’s footage was known about immediately after the disaster but ‘nobody ever asked for it’. Right: Harold Schenck

‘Using the tried and true scientific method, we were able to unravel a key part of one of history’s most famous and captivating unsolved mysteries.’

And director Kirk Wolfinger added: ‘This film not only reveals new insights into how this tragic event unfolded, but also illustrates the enormous scale of the disaster.’

In November 2019, the last remaining survivor of the Hindenburg Disaster died at the age of 90.

Doehner, who was just eight years old at the time of the crash, was on the airship with his parents and older brother and sister.

‘He did not talk about it,’ his son Bernie Doehner told The Associated Press shortly after his death.

‘It was definitely a repressed memory. He lost his sister, he lost his dad.’ 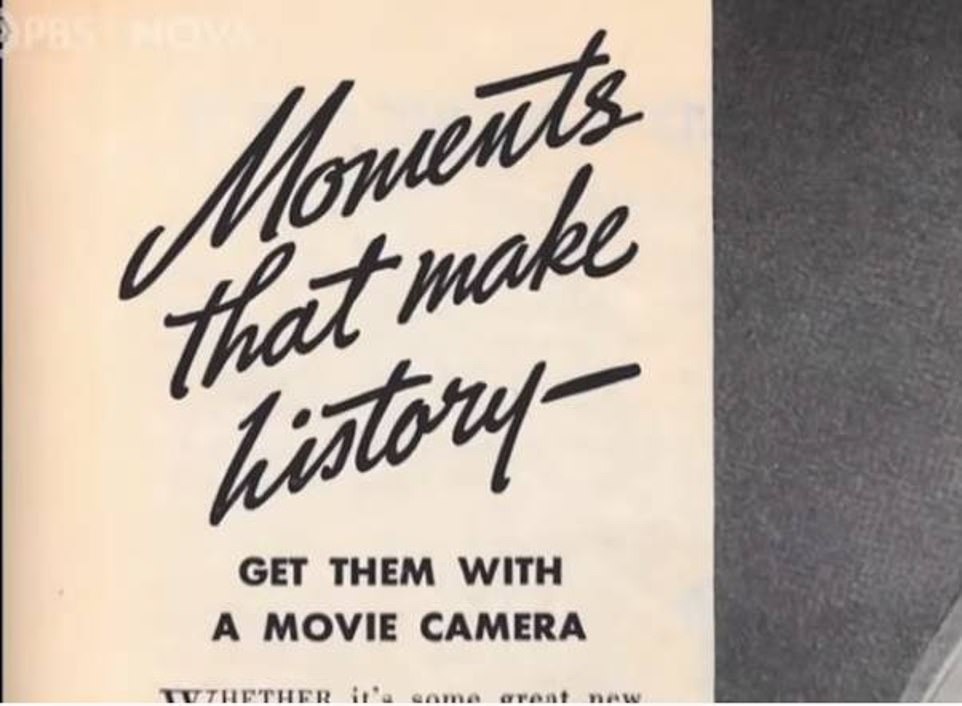 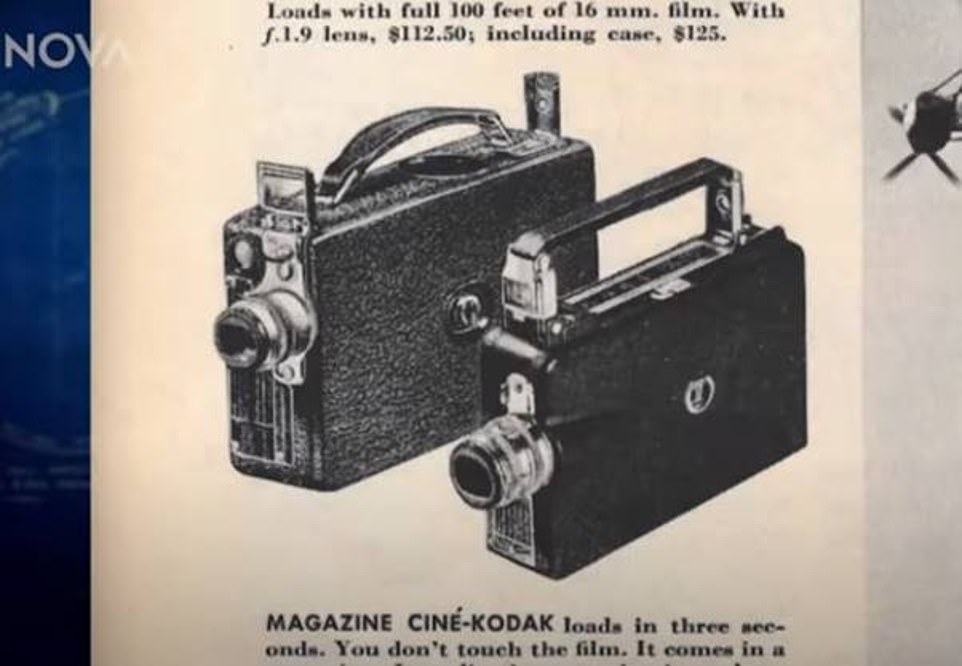 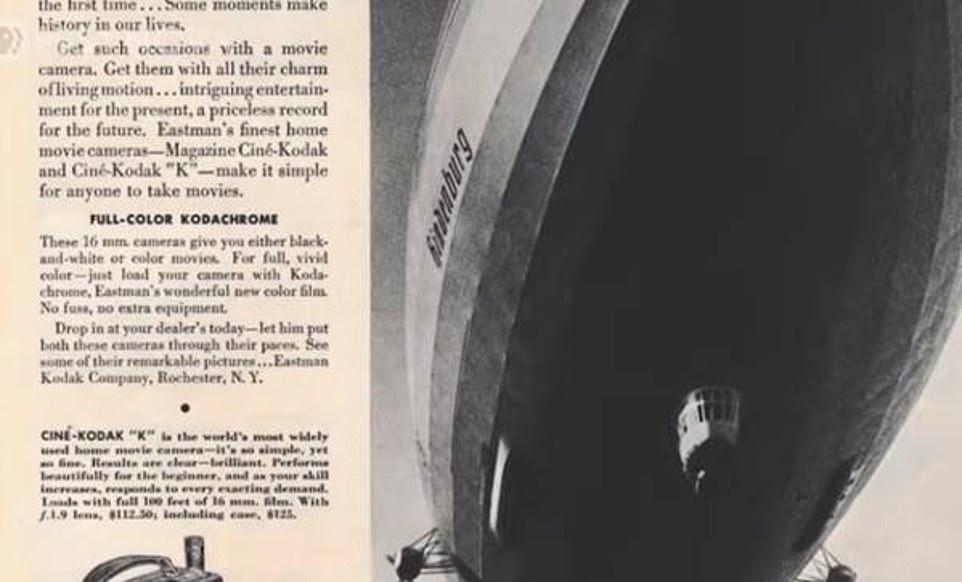 The show earlier reveals a chilling Kodak advert featuring a picture of the Hindenburg on an earlier flight. It bore the strapline: ‘Moments that make history – get them with a movie camera’

He added that his father took him to visit the naval station years later, but not the site itself, which is now marked with a memorial to the victims.

Back in 2017, Doehner gave a rare interview with the Associated Press, recalling the moment flames began to flicker on top of the air ship as hydrogen, exposed to air, fueled an inferno.

‘Suddenly, the air was on fire,’ Doehner recalled.

‘We were close to a window, and my mother took my brother and threw him out. She grabbed me and fell back and then threw me out,’ he said.

‘She tried to get my sister, but she was too heavy, and my mother decided to get out by the time the zeppelin was nearly on the ground.’

Doehner added: ‘I remember lying on the ground, and my brother told me to get up and to get out of there,’ he recalled.

Their mother joined them and asked a steward to get her daughter, whom he carried out of the burning wreckage.

He would remain in the hospital for three months before going to another facility in New York City in August for skin grafts.