THERESA May was desperately clinging on to power tonight after Commons Leader Andrea Leadsom dramatically quit in protest at her Brexit plan.

In one of the darkest days for the isolated PM, she faced a mass revolt from her own Cabinet and Tory backbenchers – but she insisted she will not give into their demands for her to quit now. 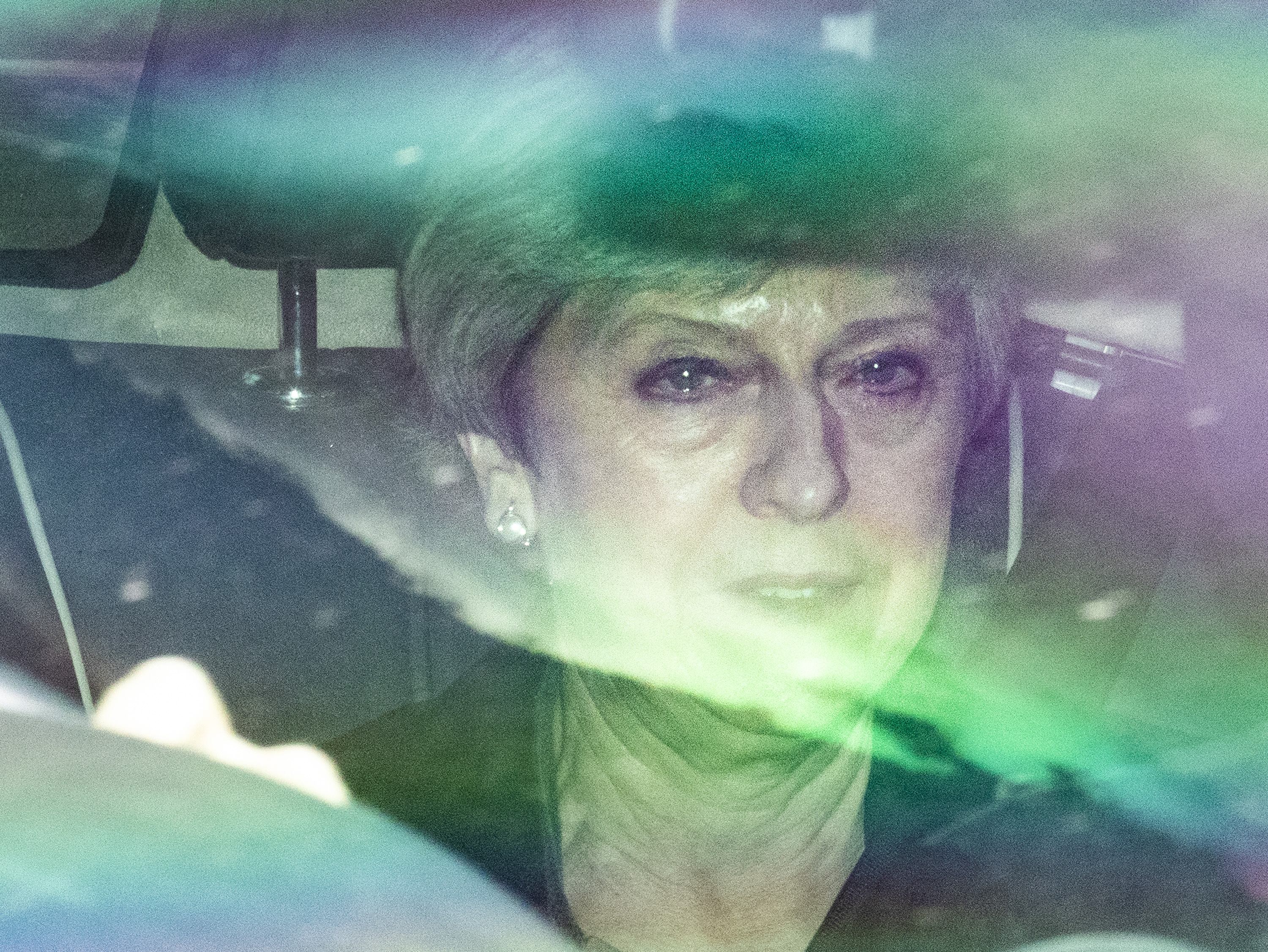 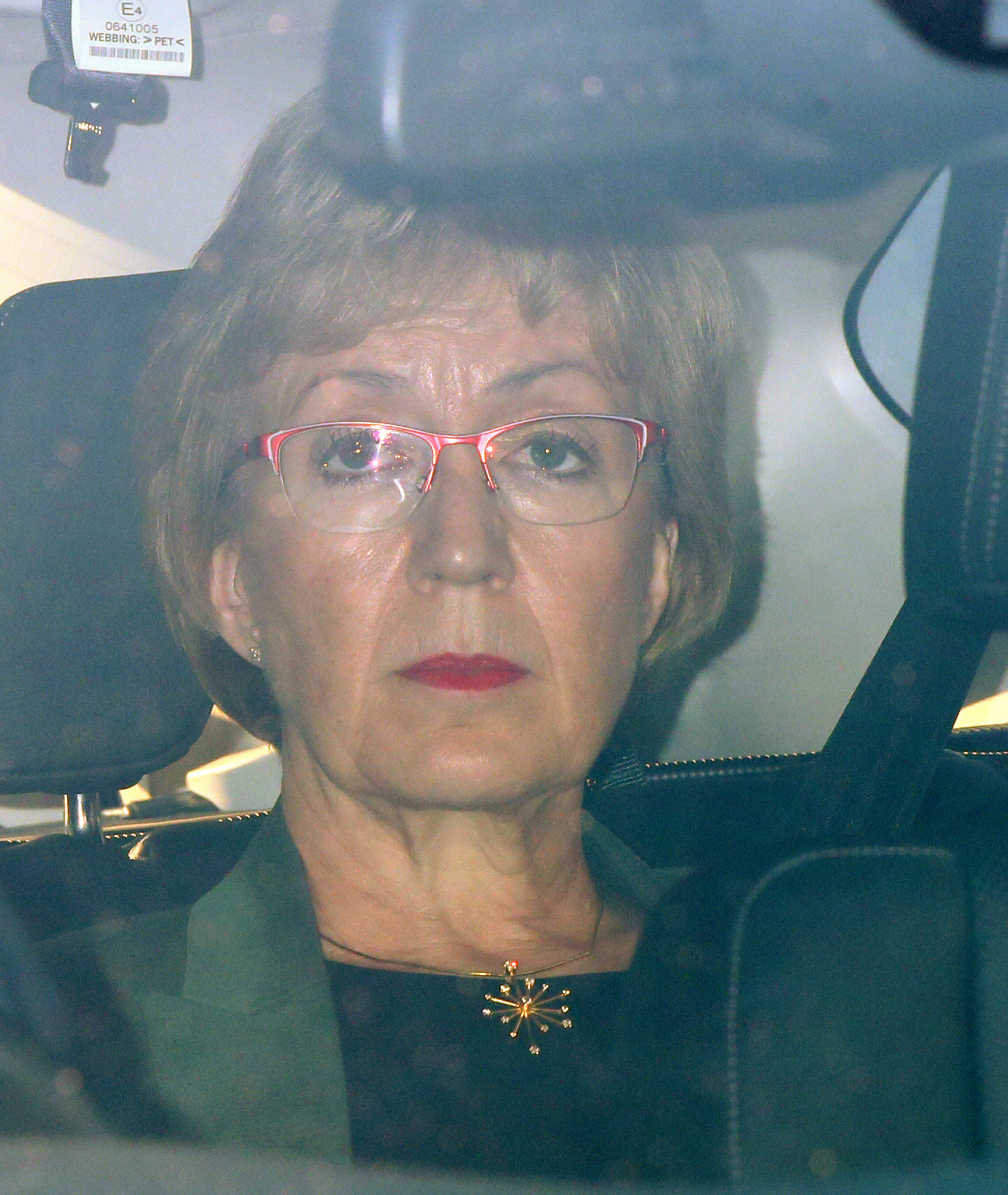 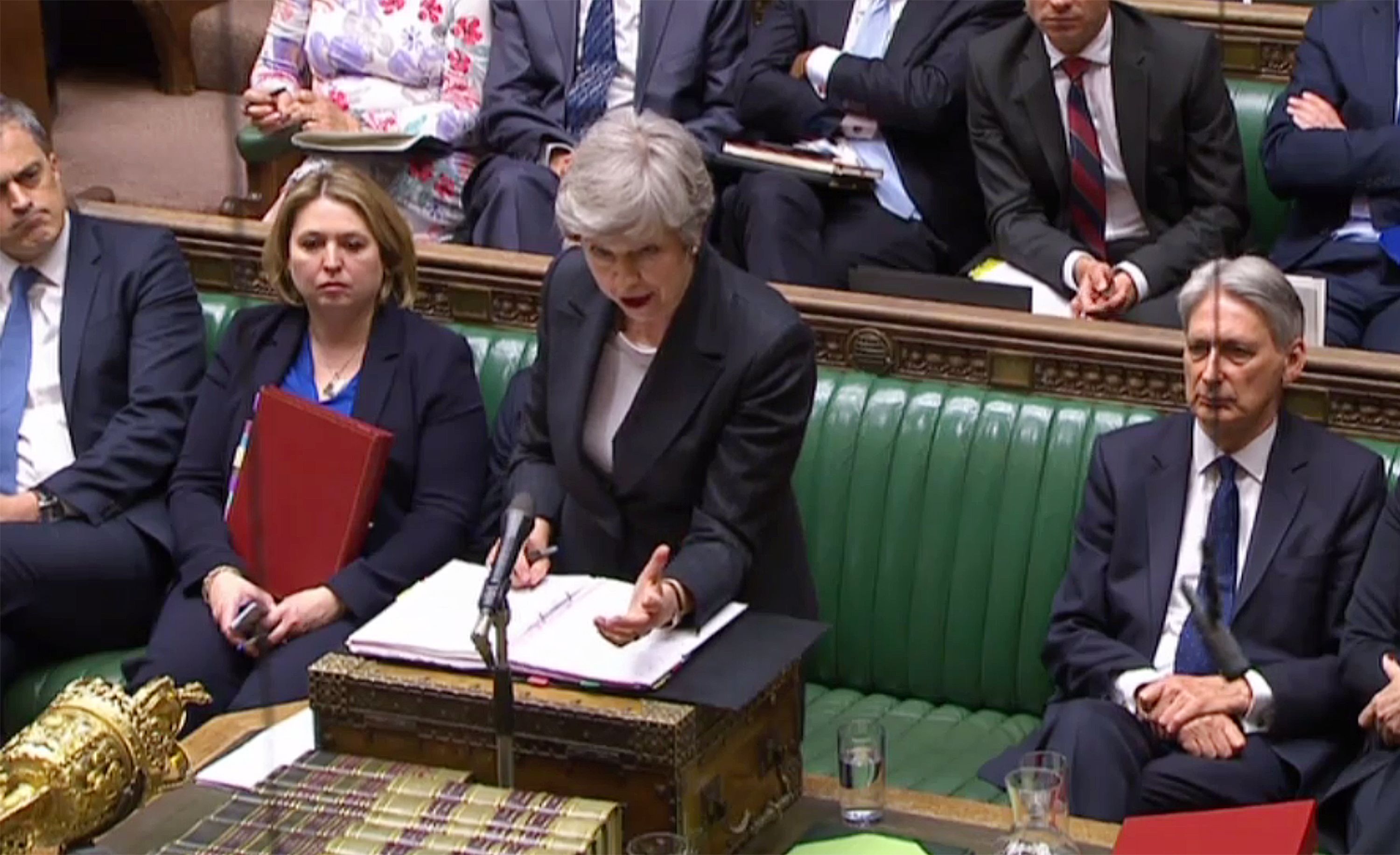 The Commons leader and staunch Brexiteer said with a "heavy heart" that she could no longer support the government's approach after May's latest gambit to pass her withdrawal agreement deal backfired among both Tory and Labour MPs.

She resigned on the eve of the EU elections where the Tories are expected to get mauled in the polls – and Nigel Farage's Brexit Party set to win the most seats.

In her resignation letter, Leadsom, who now could run to be Tory leader when Mrs May finally goes, wrote: "I do not believe that we will be a truly sovereign United Kingdom through the deal that is now proposed.

“I no longer believe that our approach will deliver on the referendum result.

"I have always maintained that a second referendum would be dangerously divisive, and I do not support the Government willingly facilitating such a concession.

"It would also risk undermining our Union which is something I passionately want to see strengthened.

"There has been such a breakdown of government processes that recent Brexit-related legislative proposals have not been properly scrutinised or approved by Cabinet members.

"The tolerance to those in Cabinet who have advocated policies contrary to the Government's position has led to a complete breakdown of collective responsibility.

"It is therefore with great regret and with a heavy heart that I resign from the government."

But Downing Street had warm words for the departing Cabinet minister tonight, saying: “Andrea Leadsom has served with distinction and great ability as a member of the government, and the Prime Minister is grateful for all of her work.

“We are disappointed that she has chosen to resign, and the Prime Minister remains focused on delivering the Brexit people voted for."

On another dramatic day in Westminster:

Mrs Leadsom's resignation raised fears it could trigger others, piling huge pressure on the Mrs May as she fights to stay in Downing Street.

The news was met with frustration from her Tory colleagues, who said this never would have happened if we'd left the EU as promised on March 29.

Backbencher Charles Walker told Sky: "The Conservative party is a very fractious and unhappy place at the moment, and a lot of people are indulging in  blame allocation saying it is the Prime Minister’s responsibility."

The PM faces a growing mutiny from Conservatives who are furious that she watered down her Brexit deal to try and win over Brexit votes.

Cabinet ministers met this morning in the so-called "Pizza club" to discuss what to do next – and several of them didn't show up to support her in today's PMQs.

Sajid Javid requested a meeting with Mrs May where he will tell her to reverse her pledge on offering MPs a second referendum vote.

Scottish Secretary David Mundell also asked to see the PM, with other ministers including Andrea Leadsom and Jeremy Hunt putting in their own requests.

It's understood they will all tell her she can't push the Withdrawal Agreement Bill to a vote without U-turning on the promise she made last night to include a binding say on a second referendum.

But No10 apparently turned down the demands for meetings as Mrs May bunkered down. Ex-leader Iain Duncan Smith said: "The sofa is up against the door, she’s not leaving."

Instead of agreeing to see the ministers, the Prime Minister went to Buckingham Palace for her weekly audience with the Queen.

Chief Whip Julian Smith tonight met the Tory grandees who run the powerful 1922 Committee – and told them the PM has no plans to quit imminently.

But the 1922 executive fell short of changing party rules to allow a fresh no-confidence vote in Mrs May which is the only binding way of throwing her out of office.

Instead, the leader has agreed to meet chairman Sir Graham Brady on Friday, after the European Parliament elections where the Tories are set for a disastrous result.

It's understood he expects her to set out a firm timetable for her resignation at that point or face a formal challenge at last.

If Parliament passes the bill before the summer recess, the UK will leave the EU by the end of July

Earlier today Mrs May begged the Commons to get behind her, saying it was the duty of all MPs to make decisions, not duck them.

"If Parliament passes the bill before the summer recess, the UK will leave the EU by the end of July," she said.

"By any definition, that alone is delivering Brexit – and by leaving with a deal, we can do so much more besides."

In the Commons the PM said she was being attacked by MPs who had told her she had not compromised enough, and others saying she'd compromised too much, and joked she was "looking forward" to voting for a fourth time to deliver Brexit.

"At some stage we have to some together and decide how to deliver Brexit and what people asked us to do," she stressed.

But Top Tory Nicky Morgan warned that she should consider pulling the bill as there isn't enough support for it. She told the Commons: "The consequences of it not being passed are very serious."

DUP's Nigel Dodds said that Britain were still at the mercy of the EU who could keep us in the customs union indefinitely.

When asked what happens if her bill fails, Mrs May said: "If this House chooses not to take this bill forwards then it is facing itself with a choice of whether it wants No Deal or no Brexit."

Boris Johnson earlier led the charge of Tories slamming the PM's new proposal to finally get us out of the EU, saying it's not what the British people voted for.

The ex-Foreign Secretary, who reluctantly backed the deal last time around after repeatedly opposing it, said the ideas were directly against Tory manifesto promises and "I will not vote for it."

He said on Twitter last night: "We can and must do better – and deliver what the people voted for."

Fellow Tory leadership rival Dominic Raab joined him too, adding that he "cannot support legislation that would be the vehicle for a second referendum or customs union."

Today ex-minister Theresa Villiers blasted: "This deal is even worse than the last one. It has all the downsides of the original deal but it would also lock us even more firmly into the EU’s customs orbit.

"It is a betrayal and I will not vote for it. It would not deliver Brexit."

Tom Tugendhat, a leading Tory centrist, broke cover and called for the PM to quit after previously remaining loyal to her.

He wrote in the Financial Times: "Leadership matters; it has been absent for too long. This can only change with a new Prime Minister who can inject fresh energy into a moribund process and rebuild the trust necessary to deliver a deal."

Mrs May's 10-point offer unveiled last night included promises to Labour on holding a vote on a second referendum and staying in a customs union, and attempts to woo Brexiteers with firmer guarantees on getting out of the hated Northern Irish backstop.

But it was met with near unanimous rejection from all sides, leaving MPs in no doubt it would be rejected for the fourth time. 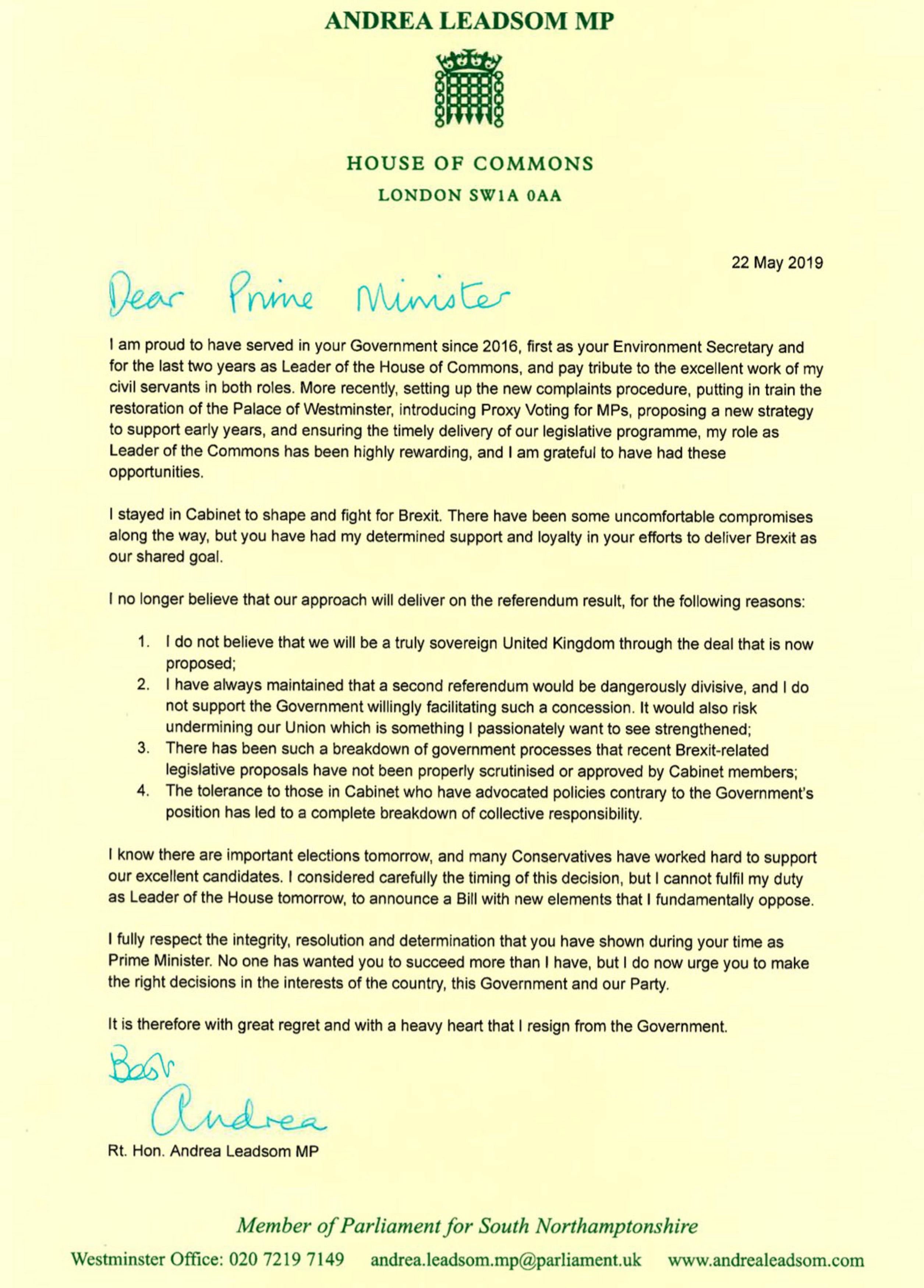 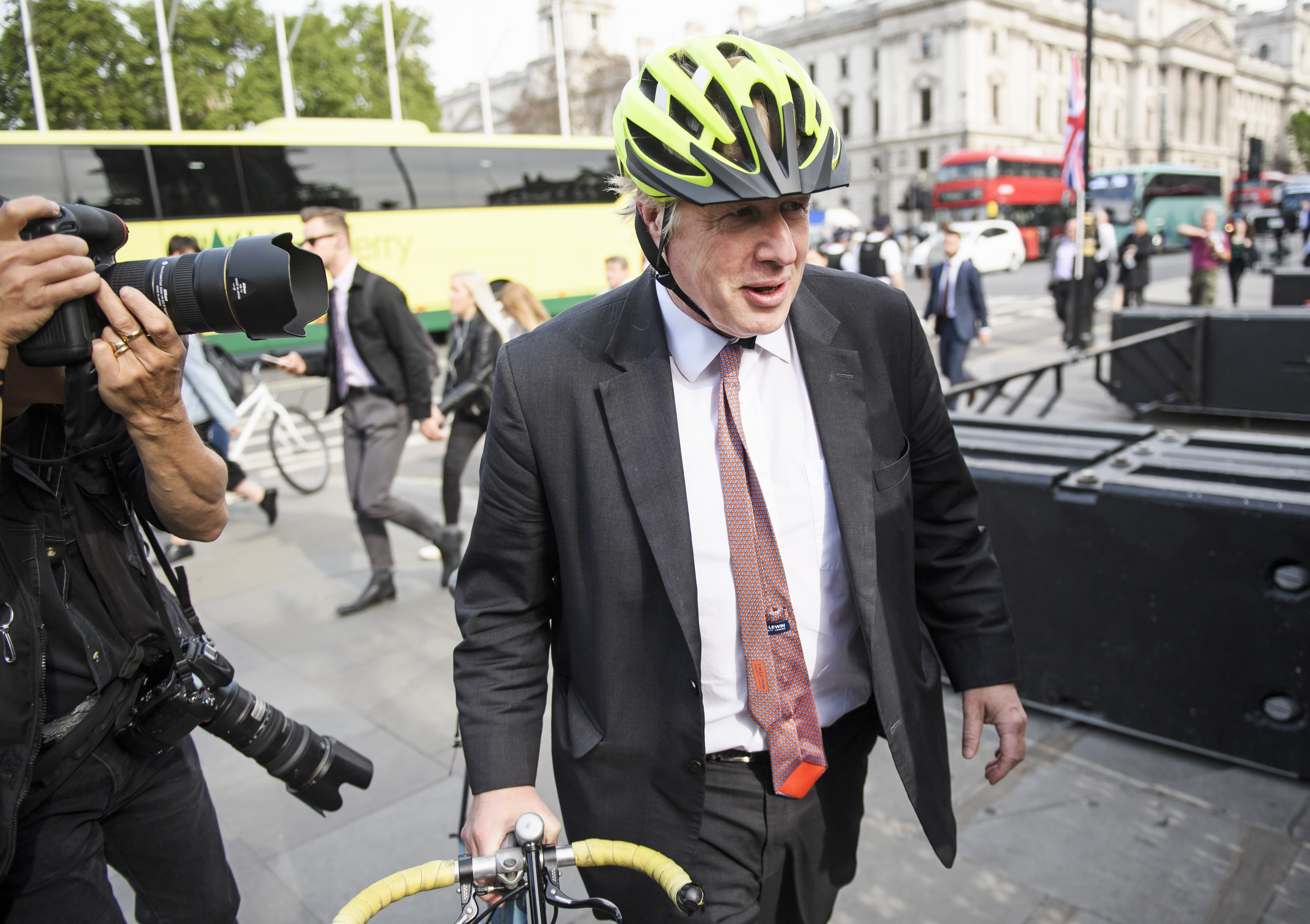 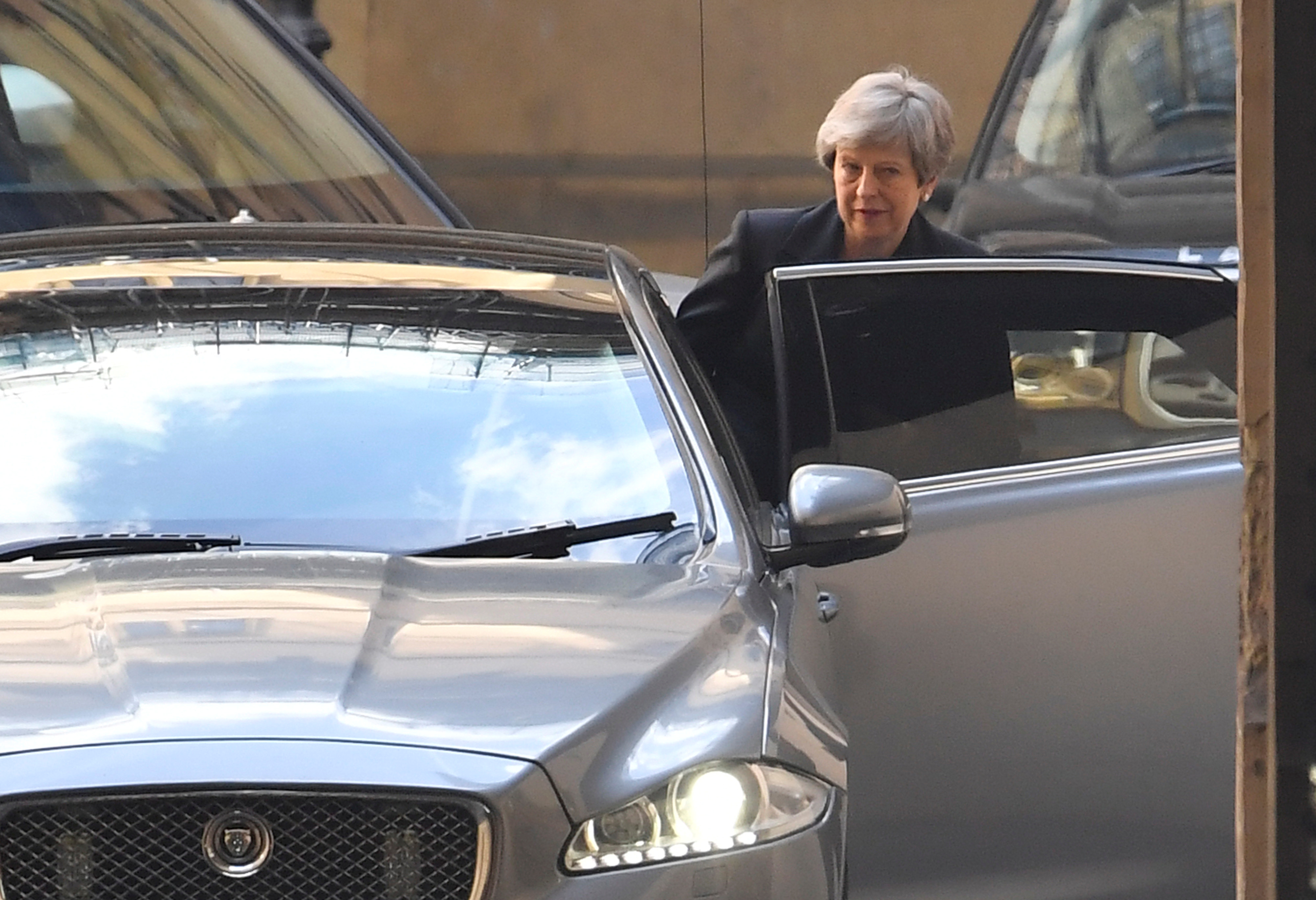 Jacob Rees-Mogg urged her to consider her position, saying this morning: "I hope the Prime Minister will look at the figures, look at the lack of support for her deal and recognise that, in truth, the PM does not command a majority in the House of Commons."

Tim Loughton wrote a letter to Sir Graham Brady expressing his lack of confidence in the PM too.

Brexiteer Owen Paterson added: "I very much hope for a coup against Theresa May. We need a new Prime Minister and new Cabinet."

Ex-Tory leader Iain Duncan Smith told LBC: "The key breaking point will be the Euros on Sunday and that's when I think we will see people step into action".

He added in the Daily Telegraph: "The upshot is that Mrs May's legacy is now sure to be a poisonous one – a scorched earth of broken Brexit promises and a party battered by the aftermath.

"Not so much a car crash as a multiple pile-up on a three-year road to nowhere."

The final YouGov poll before Brits go to the polls tomorrow showed the Tories in fifth place on just seven percent – with the Brexit Party storming ahead on 37 per cent.

The PM said she will bring it back to the Commons in the first week of June, but today Michael Gove hinted it could be pulled yet again.

He told the BBC the Government would "reflect" on the course of action in the next few days – but insisted a vote HAD to be held. 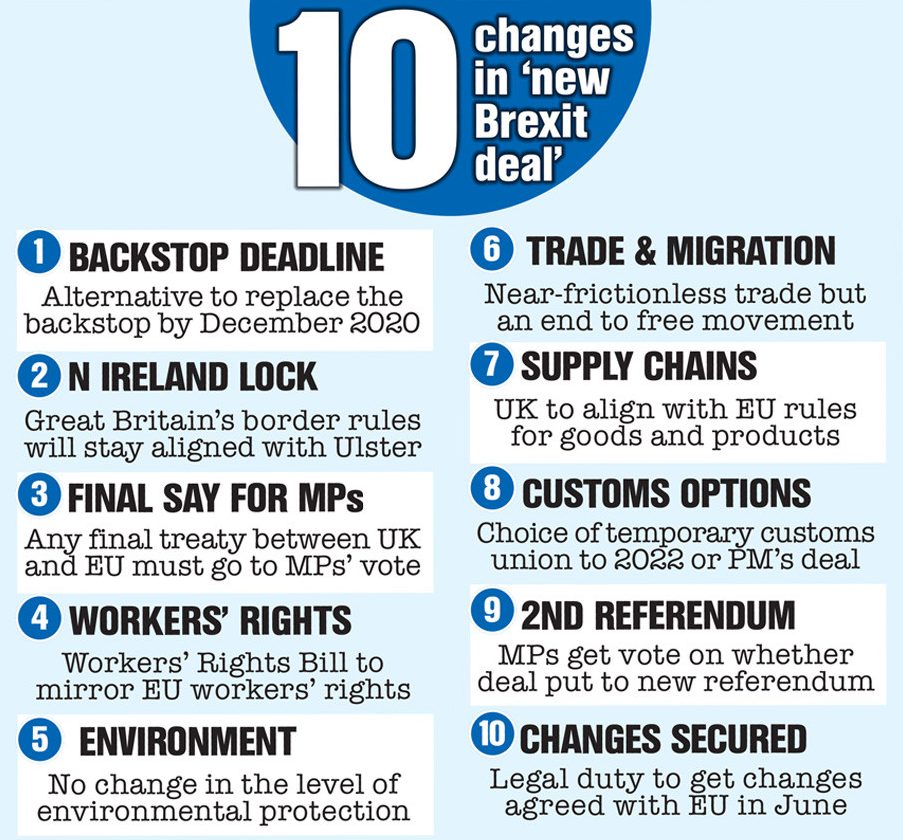 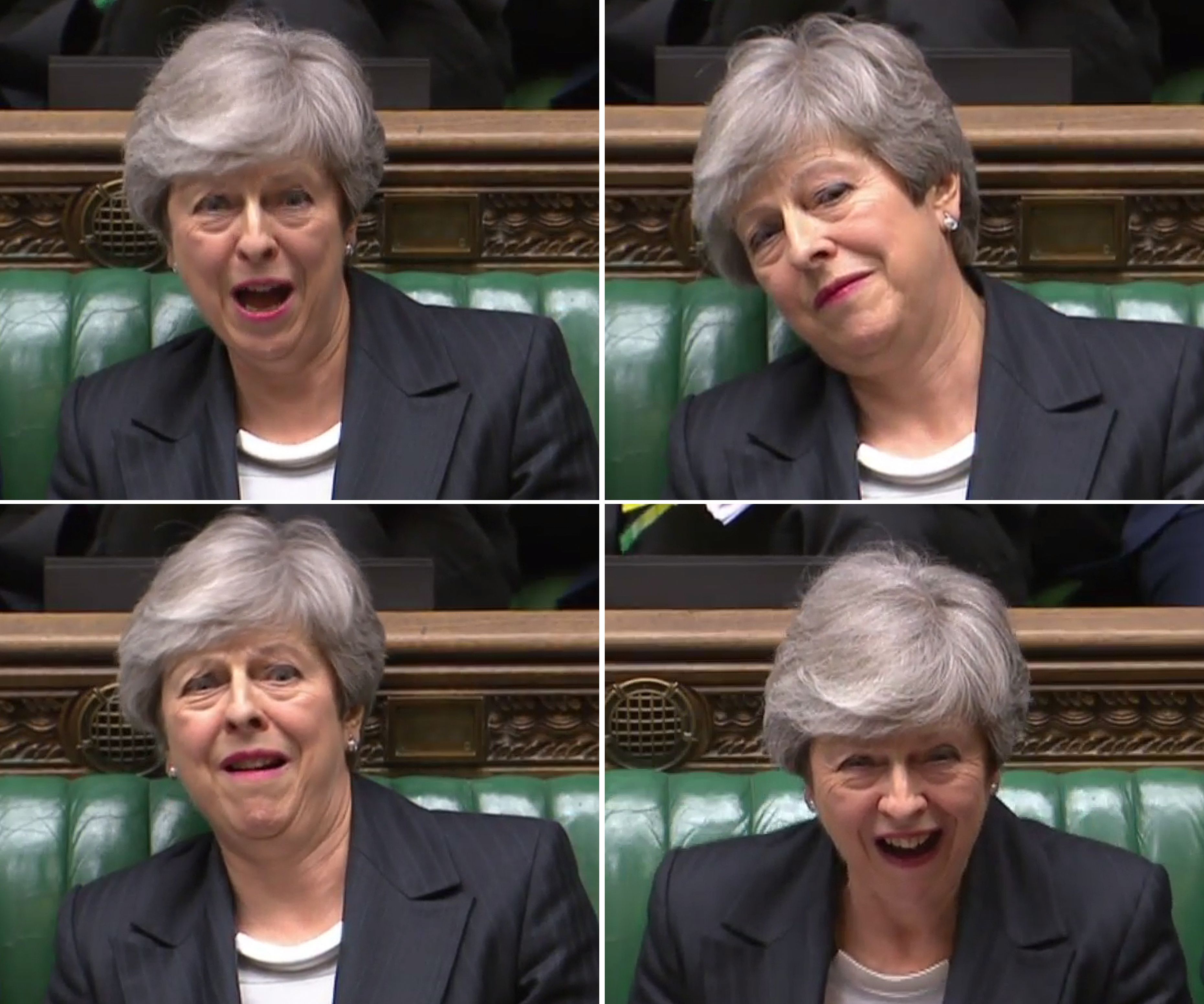 "I hope people will support a negotiated settlement that will take us out of the EU.

"It's important we take a bit of time and step back… reflect on the broader picture… and consider what the options are.

"The right thing is to honour the British people’s decision to leave."

THE barrage of abuse from all sides over Theresa May’s final desperate capitulation tells its own story.

No wonder her Leave MPs are screaming blue murder.

She has already welched on almost every promise. Now, after all she has said, she has even offered the second referendum mob a binding chance to engineer Brexit’s destruction.

For good measure she has caved to a string of Labour demands that, if Brexit happened, would shackle us so tightly to the EU it would look all but pointless.

It still isn’t enough for Corbyn’s party. Nothing could be. Their sole interest is in wrecking the Tories.

Nor is it enough even for “people’s vote” Remainers. They don’t want to risk a Commons vote they could lose. They demand to be GIVEN their second referendum, against the wishes of MPs and the public.

At least the PM didn’t go that far. But she should not have budged an inch.

A second vote before the first is enacted would be a grotesque abuse of democracy, enough to destroy public faith in it for a generation.

Mrs May is presumably confident a majority of MPs would reject it. That’s irrelevant. It is political suicide.

Leave voters now see Tories as the party that botched Brexit, then surrendered over a “people’s vote” and promised to legislate for it if approved.

We respect that Mrs May, in the dying days of her disastrous rule and with no majority, tried to unite MPs around a compromise. But by tossing baubles at entrenched and utterly opposed sides she has simply alienated them all.

What a gift this doomed gambit is for Nigel Farage, his Brexit Party already riding high before the euro elections.

And what a terrifying catastrophe for the Tories: for the PM who negotiated ineptly, the Remainers who shamefully sabotaged our position and the backbench ERG Brexiteers whose purism defeated the only available deal.

We warned them then that Brexit would only get softer with their party left to plummet into the abyss. We were right.

Their time may soon be up. Theresa’s is already.