Married Army sergeant, 37, is kicked out of the military after he went into female soldier’s room for cup of tea before kissing her neck, pushing her onto the bed and exposing himself

A British Army Sergeant has been kicked out of the military after he went into a female soldier’s room for a cup of tea before kissing her neck, pushing her onto the bed and exposing himself to her.

Sgt Mathew Fieldhouse – who was a corporal at the time – tried to undo the woman’s belt before undoing his own during the ‘frightening’ assault.

The married man, whose wife was pregnant at the time, began playing with himself while saying ‘come on’ before she fled to another room.

A court martial heard the victim was junior to him and going through a difficult time. She felt as though Sgt Fieldhouse, who she considered a friend, ‘took advantage of her vulnerability’.

The woman wept as she told the court the experience had left her feeling ‘disgusting’ and she had lost her trust in men. 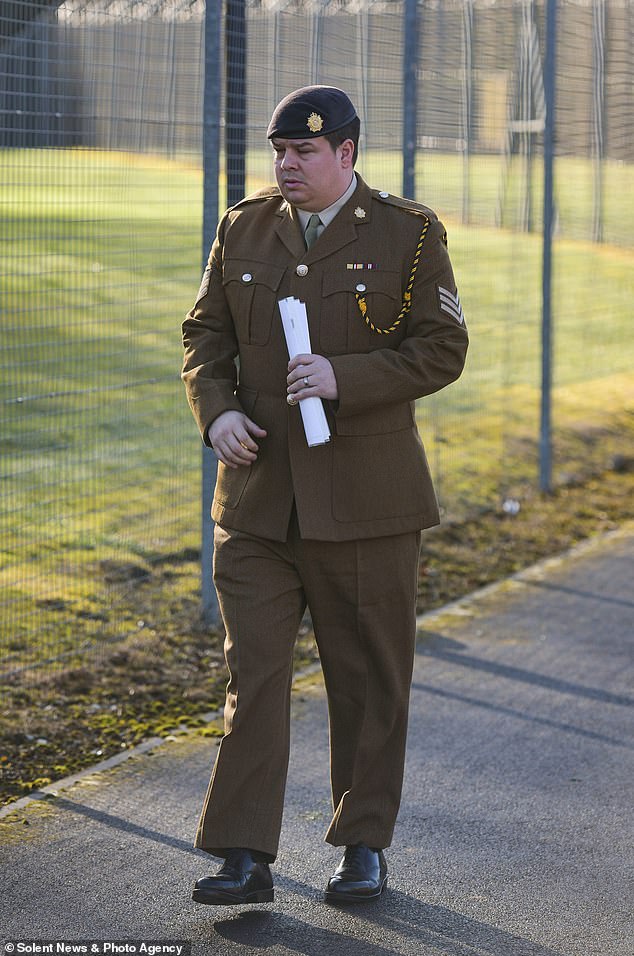 The 37 year old denied one count of sexual assault but was found guilty following a trial at Bulford Military Court, Wiltshire.

Sgt Fieldhouse – who bowed his head for much of the hearing and sobbed afterwards – has now been dismissed from the Army and reduced in rank as a judge castigated him for ‘abusing’ their friendship.

He was also ordered to pay his victim £1,000 in compensation.

Judge Advocate Jane England said: ‘You subjected the victim to a frightening sexual assault in her own room after she had innocently invited you there.

‘You abused your friendship – you sexually assaulted a friend and colleague in a particularly unpleasant way.

‘You took advantage of her, forced your desires on her. You attempted to undo her belt and took your penis out and started massaging it. She feared the worst and we can well see why.

‘We saw the effect this offence has had on her and she blames herself, partly because she was outgoing and friendly.

‘We hope she no longer blames herself, as the only person to blame is you.

‘It’s a very sad way to bring to an end 20 years of exemplary service, but it is an end you have brought upon yourself, by your own actions.’

The trial in March heard Sgt Fieldhouse, of the 25 Training Regiment of the Royal Logistics Corps, had told his victim he was having marital problems. 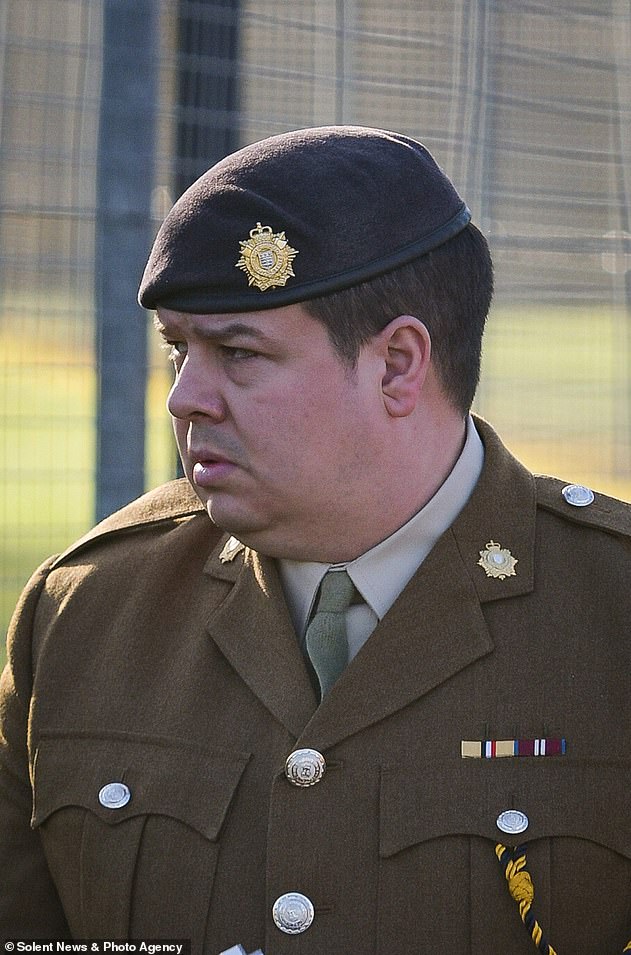 Mathew Fieldhouse, 37, had denied exposing himself to an army colleague, but was found guilty following a trial at Bulford Military Court, Wiltshire

She said Sgt Fieldhouse, who has been in the Army for over 20 years and goes by the nickname ‘Mouse’, was known for his flirty banter and would make sexual comments, but that these were always laughed off.

Rupert Gregory, prosecuting, told the trial: ‘The defendant went to the complainant’s block and she invited him to her room for a cup of tea.

‘He came into her room, put his hands on her and picked her up by her hips and began kissing her on her neck.

‘She was nervous. She did not know how to react. He put her on the bed with one knee on the bed and tried to unbuckle her belt.

‘She ran out of the room to two rooms away into another private’s room and told him what had happened.’

In her video interview, played to the court, the woman said she had not thought anything about inviting him to her room as she had many male friends.

The woman said: ‘He picked me up and put me on the bed and started kissing me. I started laughing, I was in shock. I don’t know if he thought ‘oh she’s liking this’.

‘I felt really uncomfortable while he was doing it. I don’t see him in that way – he’s not the most attractive guy in the world.

‘He pulled his boxers down and grabbed his penis and was doing some movements or whatever, playing with himself. That’s when he was like ‘oh, come on’.

‘I thought ‘this is too much’ and something was triggered and I just went out. I felt disgusting.’

The woman wept as she added: ‘I was not myself. It felt like he took advantage of my vulnerability because of the stuff I was going through.

‘I didn’t say anything to anyone because I didn’t think anyone would believe me because of the person he is.’

The woman said a colleague even laughed when she told her what happened, saying ‘Mouse would not do that’ but when he realised she was being serious, he urged her to report it.

In a statement written given to police, the victim said: ‘I feel like it’s my fault. I feel like I have to change who I am to stop [something like this happening again].

‘I just don’t really trust men – I know that not all men are like that, but I just have trust issues at the moment now.’

Sgt Fieldhouse was dismissed, reduced in rank to private, handed 180 hours of community service and must pay the victim £1,000 in compensation.

09/05/2022 World News Comments Off on Army sergeant, 37, is kicked out of the military for sexual assault
Lifestyle