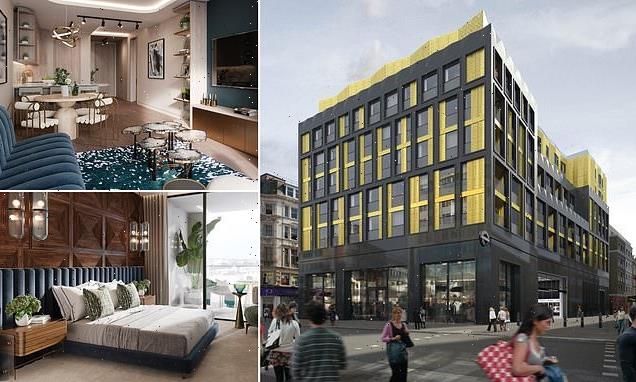 Asian tycoon snaps up mega-penthouse on Oxford Street for £21.4 MILLION so he and his wife can have a ‘London pied-a-terre’ when they entertain friends in China Town

An Asian tycoon has snapped up a mega-penthouse on Oxford Street for £21.4 million so he and his wife can have a ‘London pied-a-terre’ when they entertain friends in Chinatown.

The sale of the huge home, which comprises of seven penthouses and private terraces, is the largest single residential property purchase by value on Oxford Street this year.

The billionaire, whose identity has not been disclosed, is a high-net-worth man from Asia and purchased the ‘mega-penthouse’ because of a desire to have a London ‘pied-a-terre’ in the West End.

He opted for the £140 million residential-led development, named TCRW SOHO, because when his family are in London, they ‘do a lot of entertaining in nearby Chinatown’.

The buyer intends to create either a single large penthouse for his family or to combine the penthouses into two units to allow space for guest accommodation.

If he opts for the former, the property within would become one of the West End’s largest and most outstanding penthouses, providing 7,200 sqft of indoor space with an additional 1,000 sqft of private terraces. 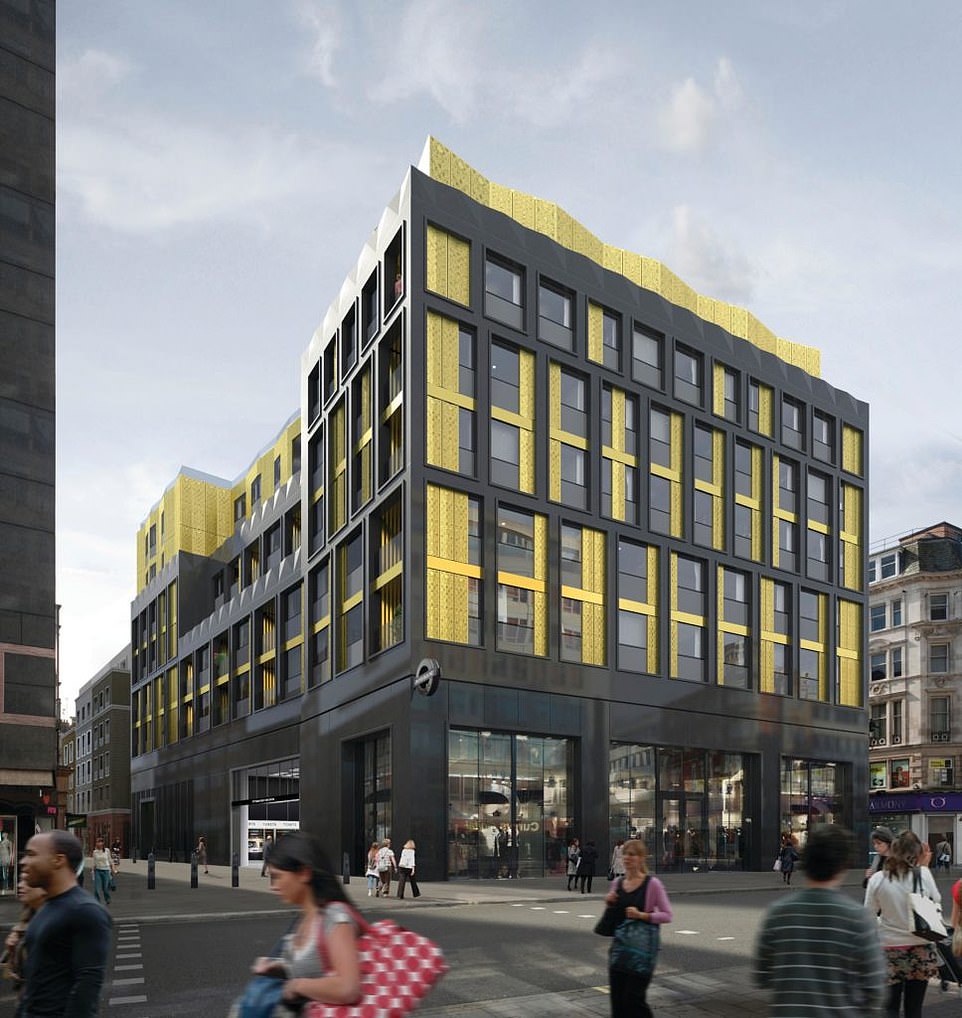 The TCRW SOHO development, being constructed by Galliard Homes, is a £140 million residential-led development in London’s Oxford Street 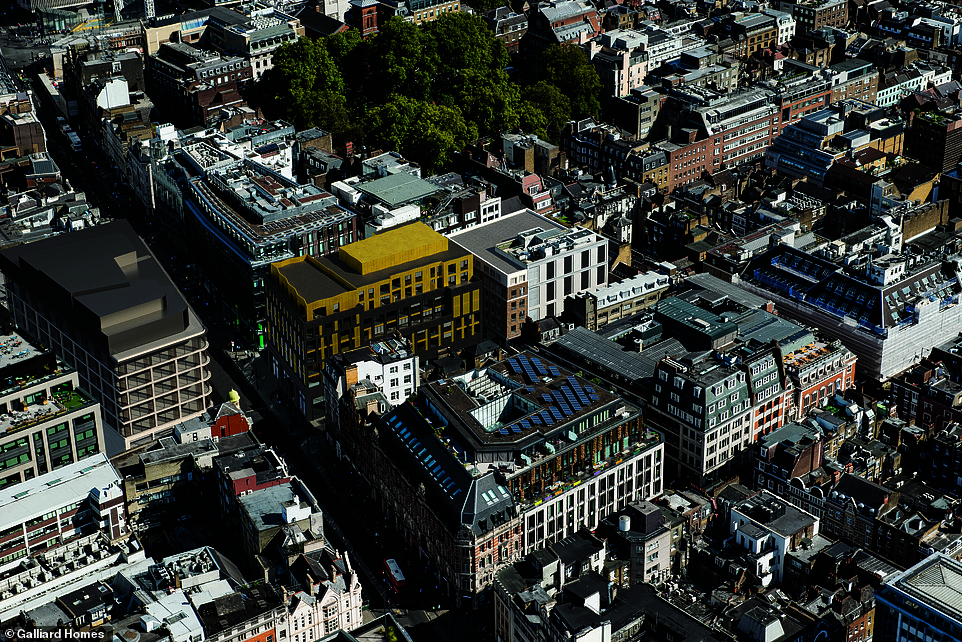 If converted into a single mega-penthouse, the property would be one of the largest and most outstanding in the West End 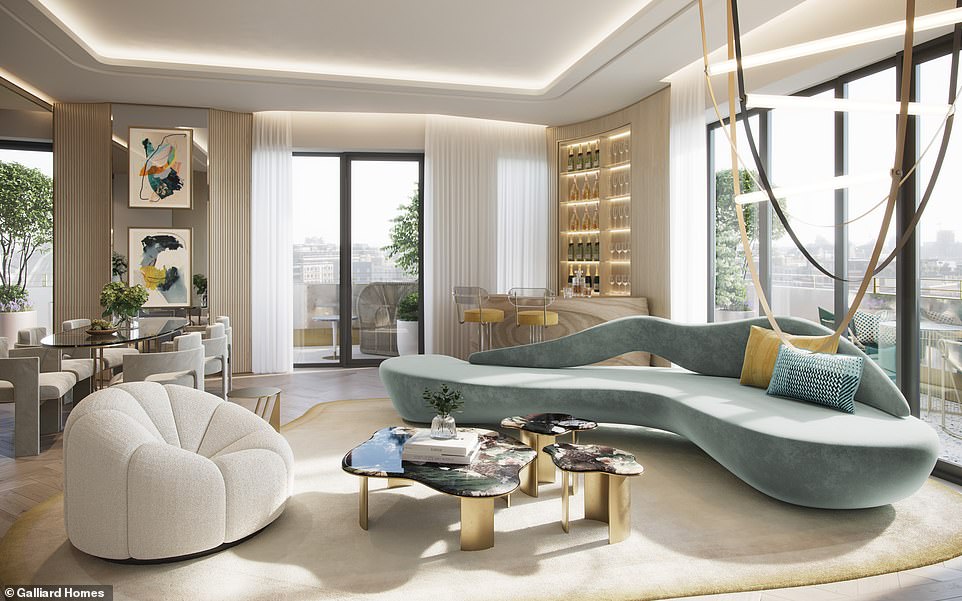 A view of a living area within a penthouse inside TCRW SOHO, which is not due for completion until the first quarter of 2023 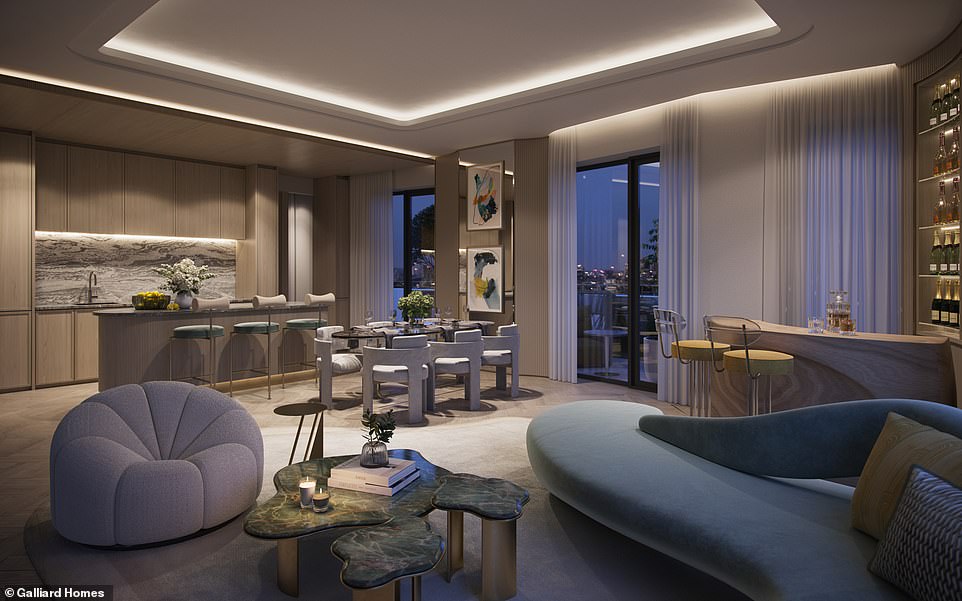 A living and kitchen area inside a penthouse, which would be a short walk away from a number of London Underground stations 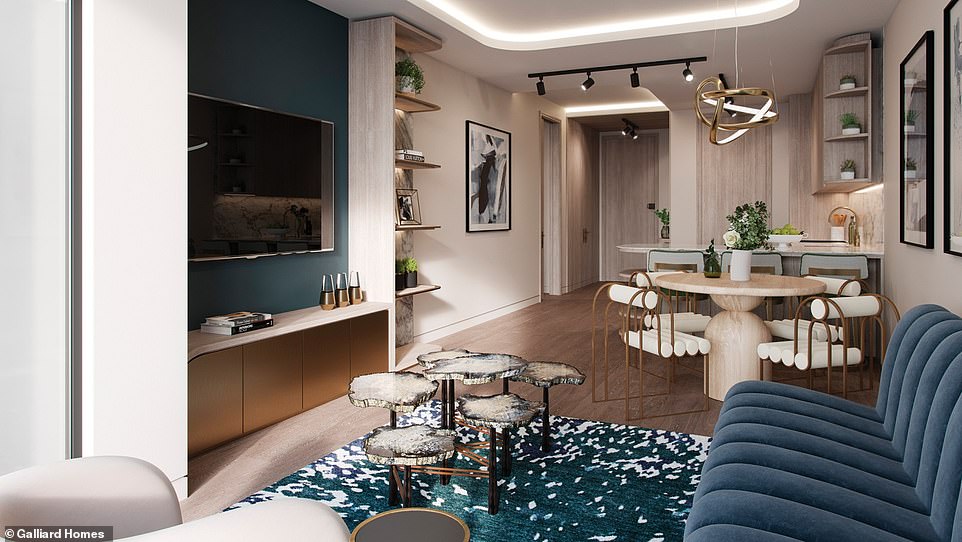 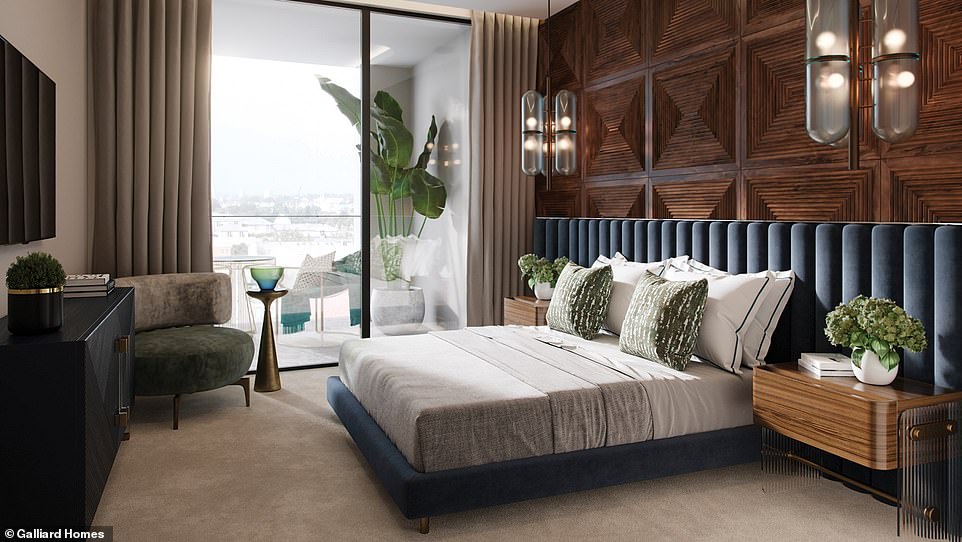 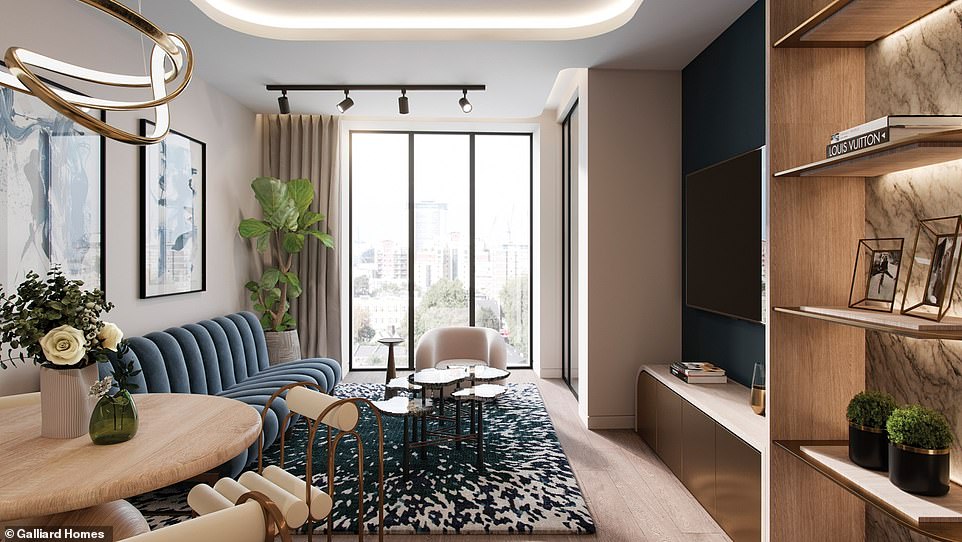 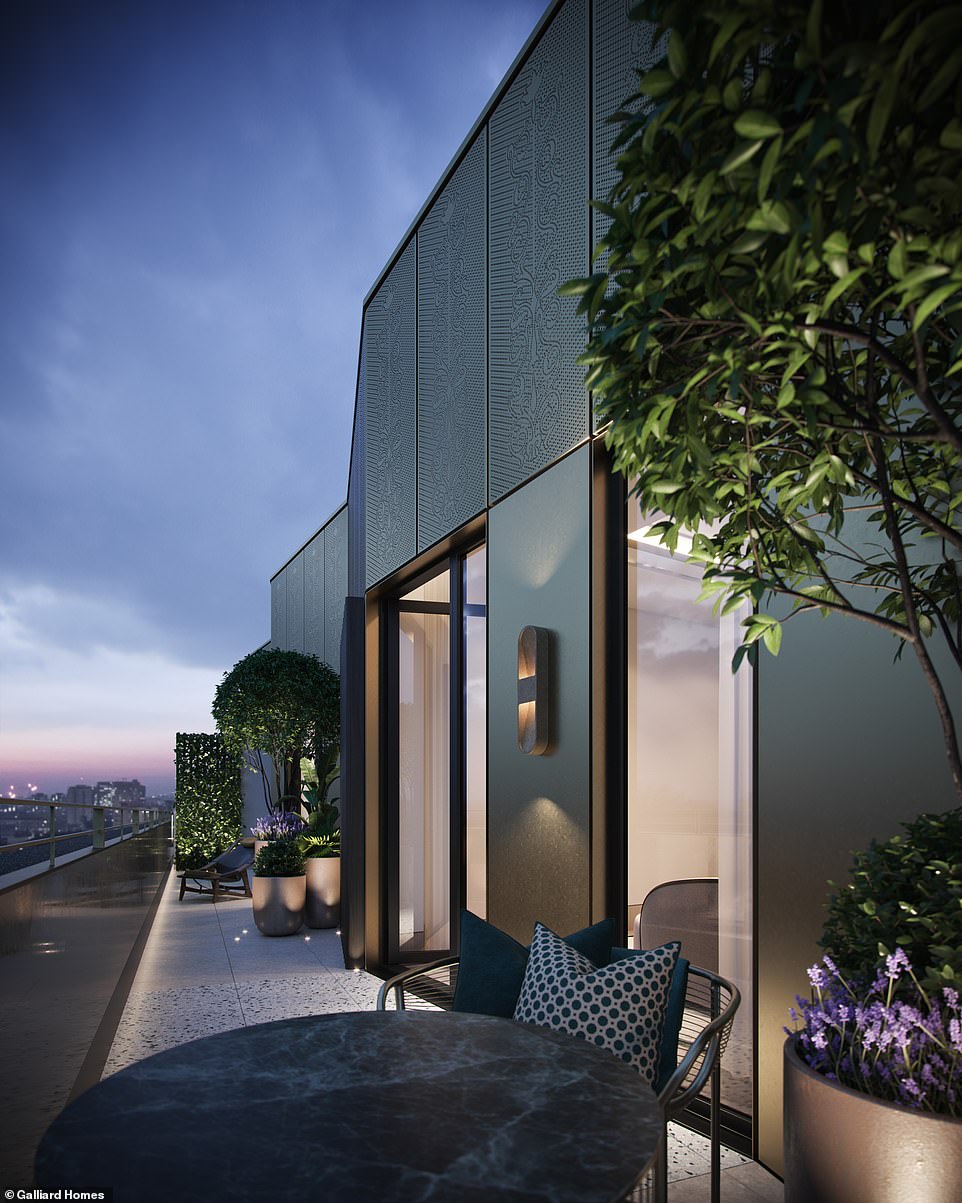 The seven penthouses are accompanied by an additional 1,000 sqft of space in the form of private terraces that wrap around the building 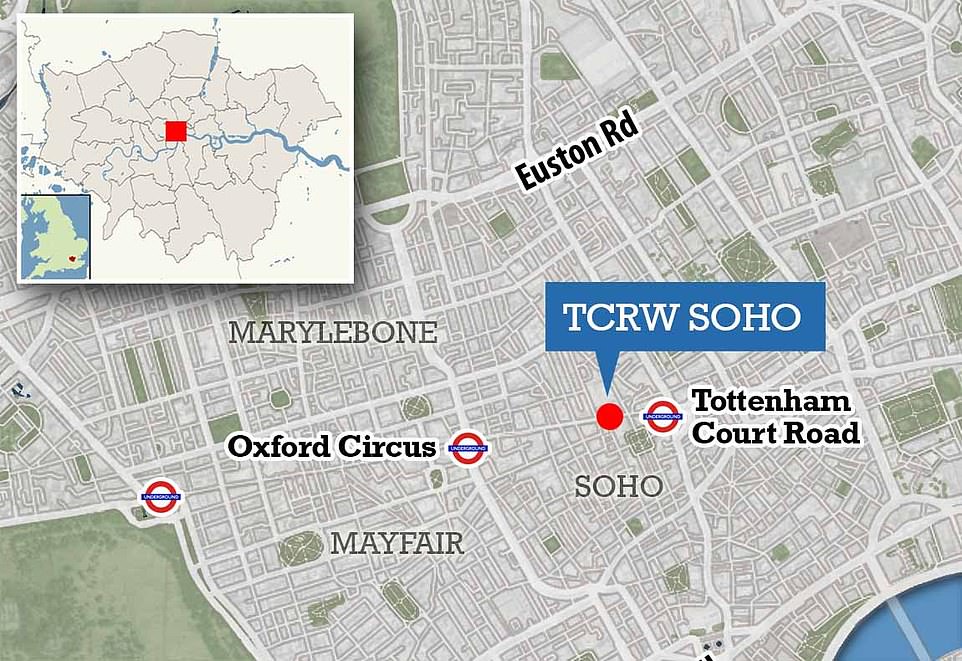 The £21.4m TCRW SOHO, developed by Galliard Homes, was unveiled at the end of 2019 and will provide 92 apartments and 9,939sqft of retail space.

The development comprises of two buildings, one is art deco in style providing 69 apartments and a 7,989 sqft Oxford Street retail unit, while the other will be Georgian-inspired in style, providing 23 apartments and 1,950 sqft of new retail accommodation and kiosks.

It is currently scheduled for completion in the first quarter of 2023.

TCRW SOHO  is described as being inspired by hotel-style living and will treat its residents to a ‘life of luxury’.

David Galman, sales director at Galliard Homes says: ‘This landmark penthouse deal, the biggest sale on Oxford Street during 2021, underlines how Soho and Oxford Street are becoming one of Prime Central London’s most sought after residential addresses. 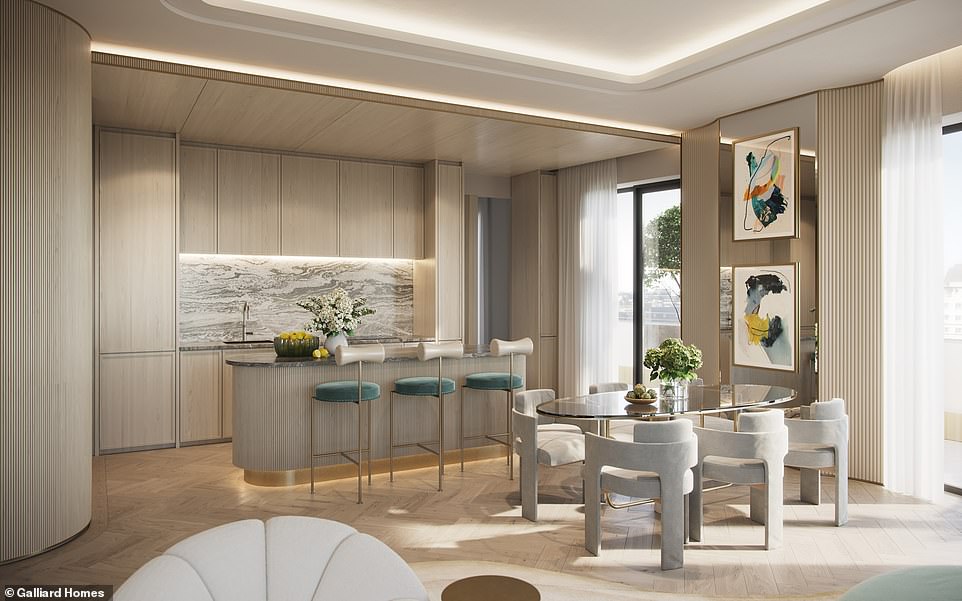 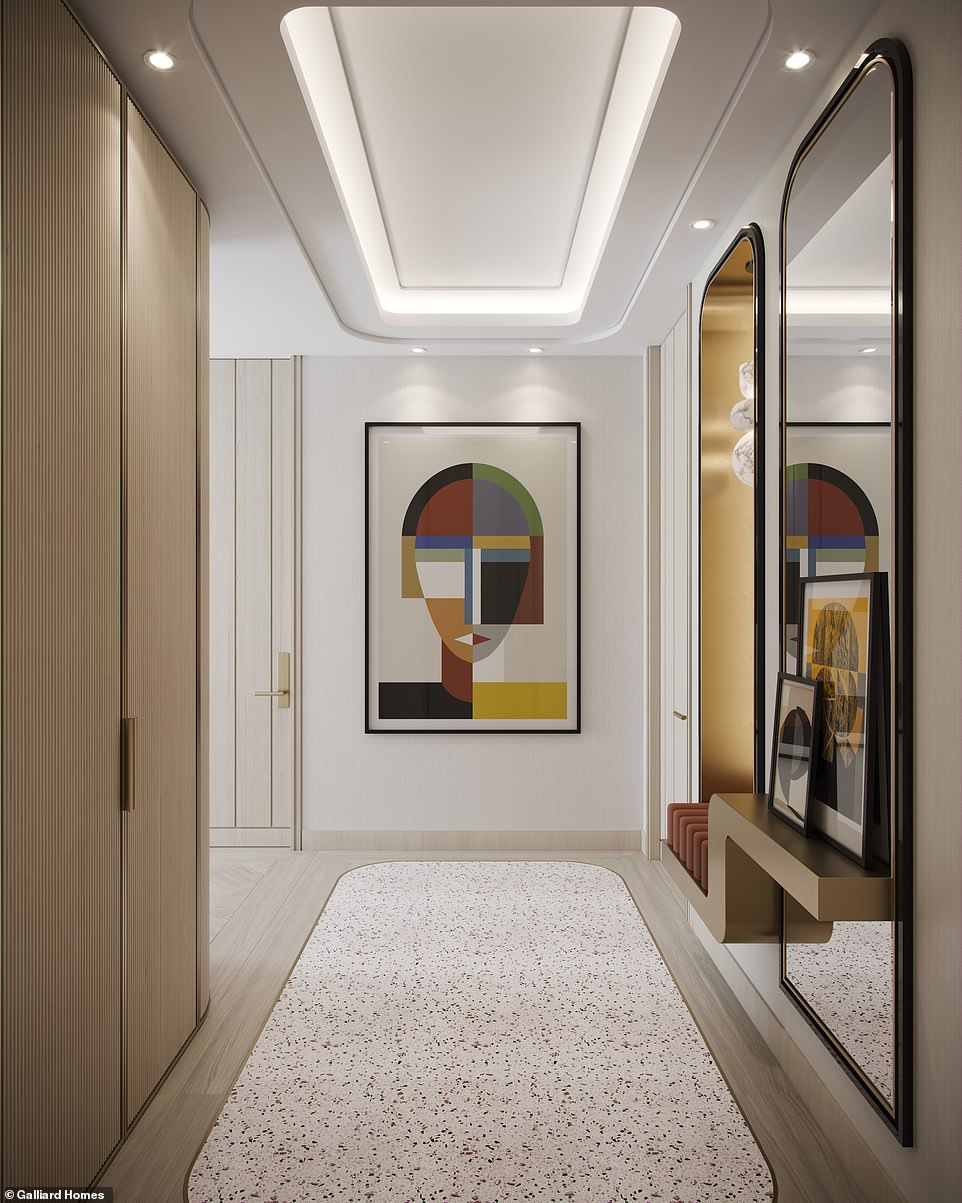 The mega-penthouse would provide almost 7,220 sqft of luxurious living space complete with over 1,000 sqft of private wrap around terraces 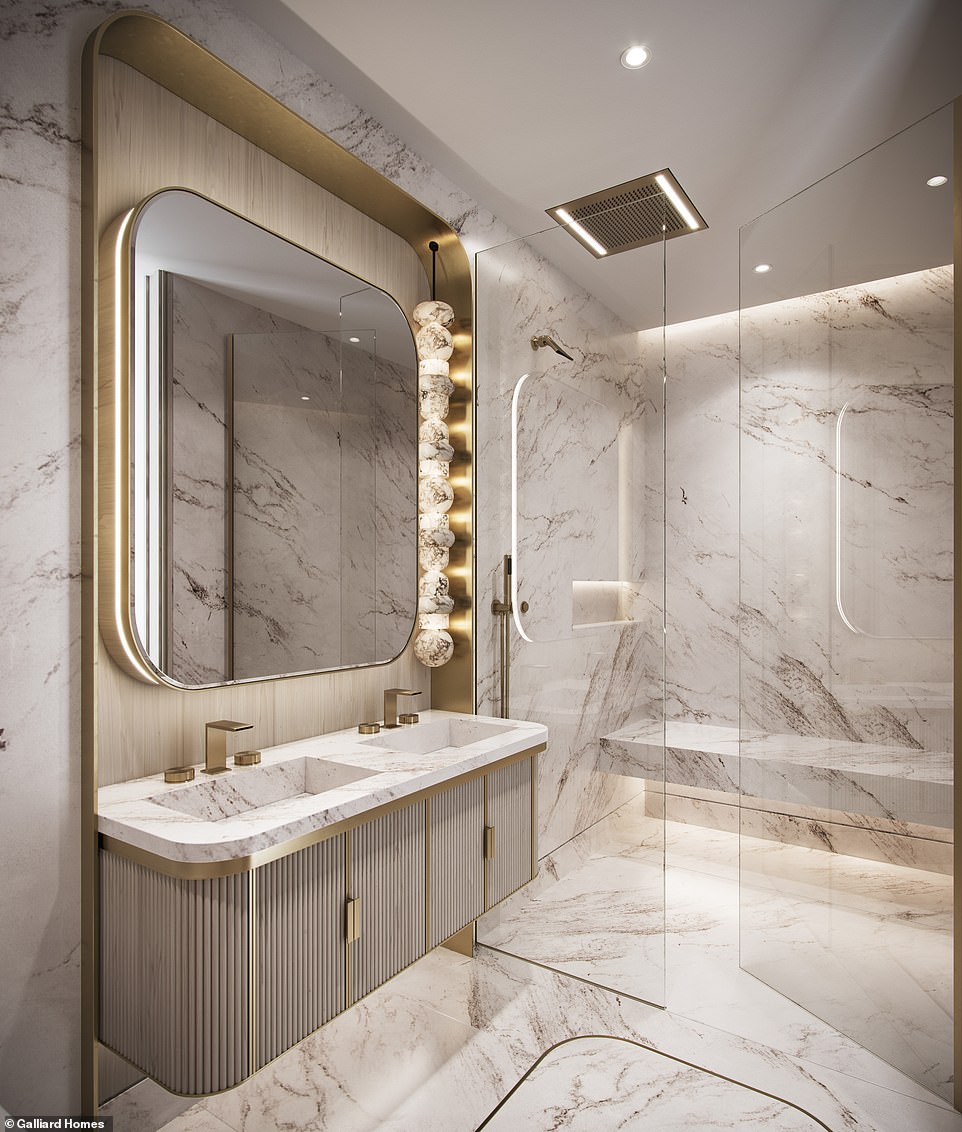 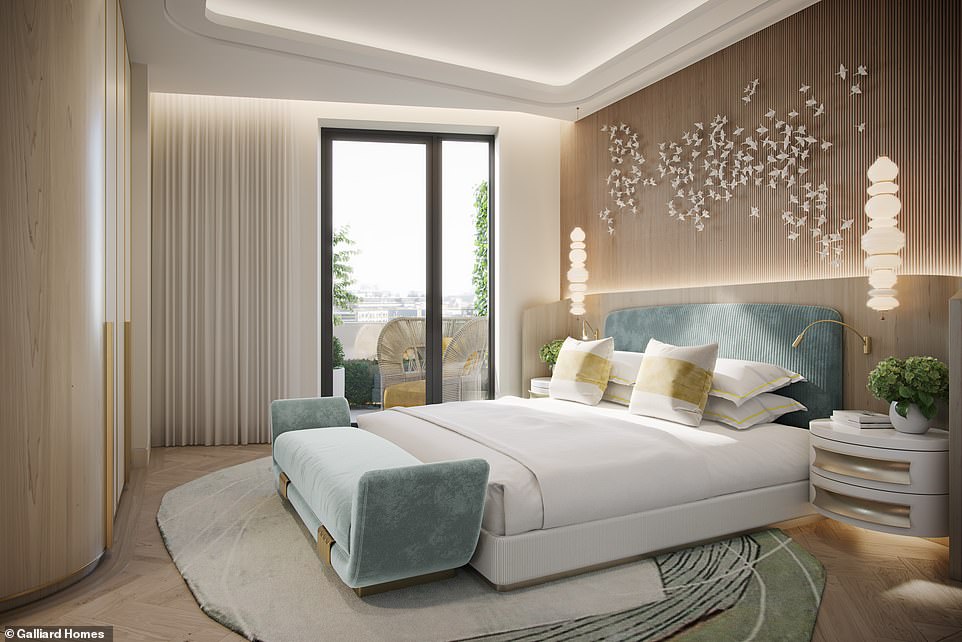 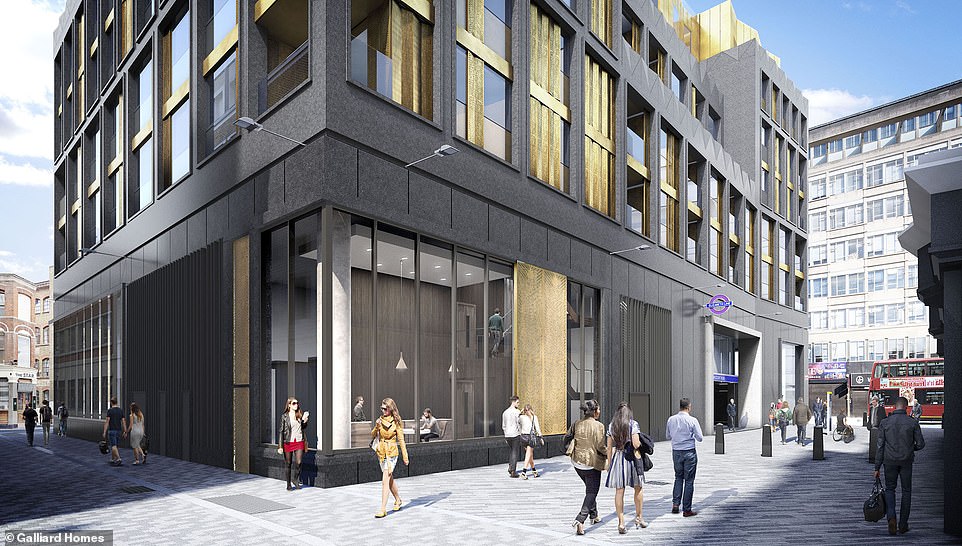 The new development will also provide 9,939sqft of retail space for a new unit in the prestigious Oxford Street 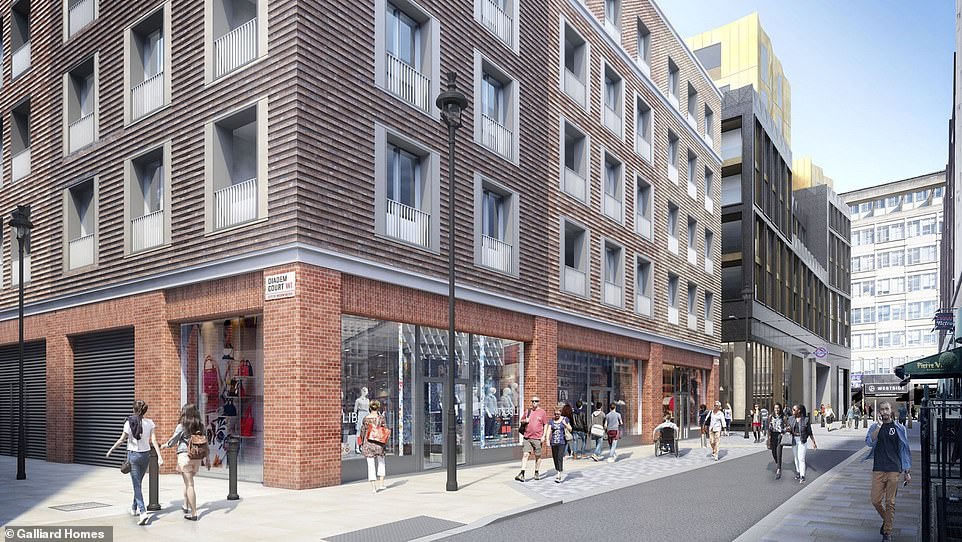 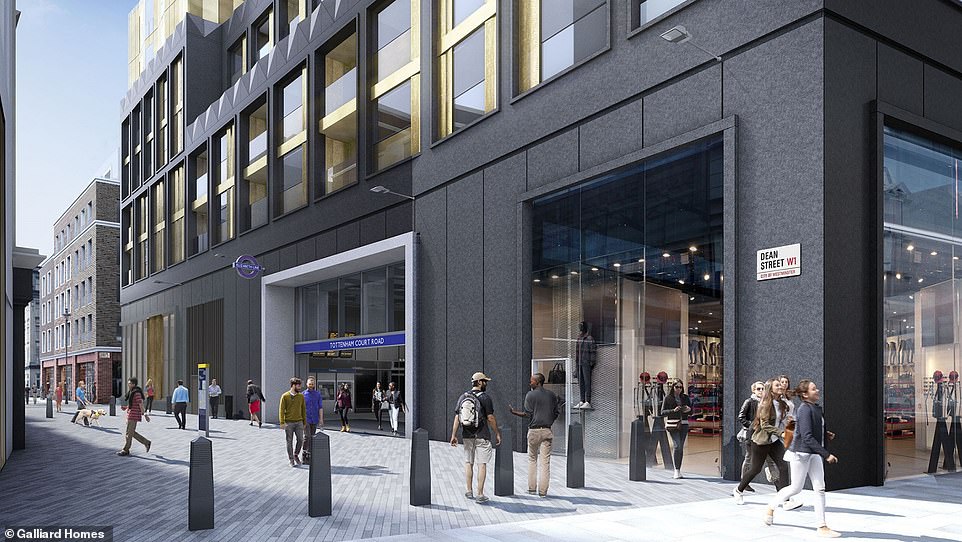 TCRW SOHO will be perfectly positioned for easy, effortless access to the rest of the capital, and with the new Crossrail Interchange practically on the doorstep

‘Pedestrianisation, Crossrail and Electric vehicles are the three ‘game changers’ which will make the West End a cleaner, much less congested and quieter place to live.’

Waleed Mohammed, founder & director of Merchants Row says: ‘Merchants Row are delighted to have introduced the buyer for this major penthouse deal at TCRW SOHO.

‘Our client liked the Prime Central London location of TCRW SOHO and was drawn to the development by the unique opportunity to buy off-plan and reconfigure the units into a bespoke residence or residences.

‘The high quality of this flagship Galliard development and the specification by Argent Design make this one of the best residential opportunities in the West End.’

How ‘platinum students’ and socialites from Hong Kong and China are snapping up more prime London real estate since start of the pandemic – including a Knightsbridge penthouse being rented for £11,000 per WEEK

The pandemic has sparked a surge in the number of ultra wealthy Chinese buyers and renters snapping up super prime properties in London, estate agents have revealed.

In the almost two years since the outbreak of Covid-19, there has been a ‘large increase’ in the number of ‘millionaires and billionaires’ from Hong Kong and mainland China seeking to buy and rent super-prime real estate in the city, according to Jeremy Gee, managing director of UK-based property firm Beauchamp Estates.

While Chinese buyers and renters have been a major force in the central London property market for several years, there has been a shift towards bigger properties since the start of 2020, suggesting a desire to find a ‘home away from home’ in the capital, rather than simply an investment property. It could also be tied to the weaker pound.

Renters are willing to spend up to £40,000 per week for the right property, he explained. Among these mega rich renters are so-called ‘platinum students’ who live off their parents’ vast wealth while studying in the UK.

Some are willing to spend so much they are outbidding corporate clients. 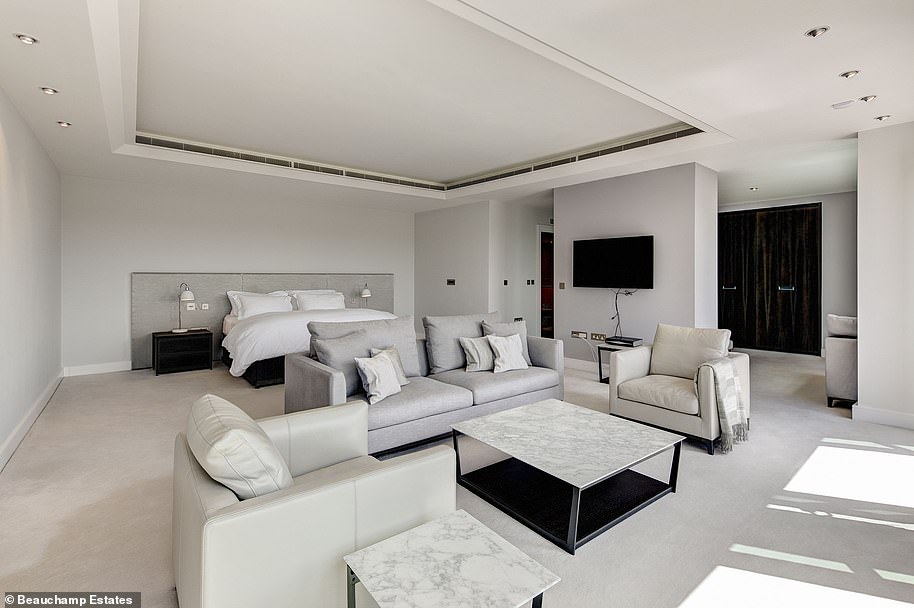 Super-prime property: The pandemic has sparked a surge in the number of ultra wealthy Chinese buyers and renters snapping up super prime properties in London, estate agents have revealed. Beauchamp Estates recently arranged the rental of a 6,000 sq ft five-bedroom penthouse in Knightsbridge, pictured, to a ‘young man’ studying for a masters degree

While this market was traditionally dominated by students from Saudi Arabia, Qatar, Kuwait, Russia, Singapore, Malaysia and Nigeria, over the last two years there has been a spike in the number of students from Hong Kong and mainland China.

‘There is currently a boom in the Mayfair lettings market as the Chinese super-rich demand the best for their student and young socialite offspring,’ explained Peter Wetherell, founder and chairman of Mayfair estate agent Wetherell.

‘They are outbidding corporate tenants although corporate demand itself remains strong, especially tenants from continental Europe. The wealthiest Chinese renters and other students from the Far East are happy to pay £1,500 to £3,000 a week to rent a flat in Mayfair whilst the socialites with billionaire parents can afford up to £10,000 plus a week to snap up Mayfair’s finest homes.’

Beauchamp Estates recently arranged the rental of a 6,000 sq ft five-bedroom penthouse in Knightsbridge to a ‘young man’ studying for a masters degree in London.

No details of his identity were given but he is able to afford an eye-watering rent of £11,000 per week.

Elsewhere a mansion in Kensington has been let for almost £8,000 per week to a mainland Chinese businessman on secondment in London and his socialite girlfriend, Mr Gee revealed.

Wetherell noted it had let Culross House on Culross Street to a 24-year-old Chinese heiress for £1.55 million per year. 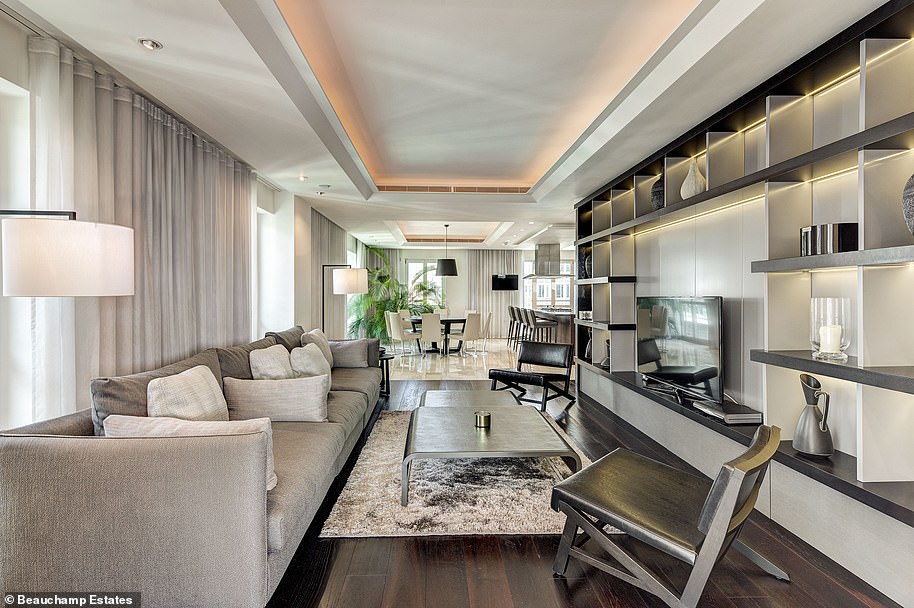 ‘We have noticed a large increase in enquires from China throughout the COVID-19 pandemic, perhaps driven by the weaker pound.

‘Buyers from China are now looking at larger properties than previously so perhaps moving away from the investment model and looking for a home in the capital and further afield.

‘The COVID-19 pandemic led to an outflow of some tenants and owners living in Central London who have chosen to relocated to the Home Counties in order to purchase larger houses with gardens.

‘This outflow led to an opportunity for Chinese and Hong Kong buyers and tenants who have been able to step in and acquire apartments, penthouses and houses in Central London.’

10/11/2021 World News Comments Off on Asian tycoon snaps up mega-penthouse on Oxford Street for £21.4m
Lifestyle