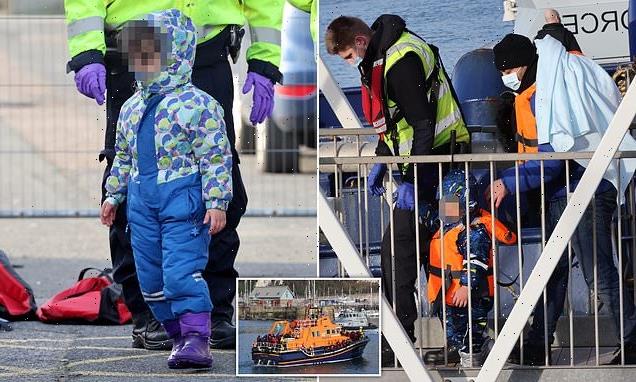 At least 100 migrants including children wrapped up in blankets and snow boots are intercepted crossing the Channel TODAY despite freezing temperatures as this year’s tally soars to 28,000 – more than THREE TIMES 2020’s total

At least 100 migrants, including children wrapped in blankets and snow boots, have been intercepted attempting to cross the Channel today despite temperatures plunging below freezing overnight.

The first group, containing around 25 people, were rescued after braving the bitter chill to navigate the 21-mile Dover Strait in pitch black darkness overnight.

An RNLI crew brought them into Dungeness, Kent, on board a lifeboat shortly after 4.30am.

On board were at least two women – with one seen holding the hand of a boy aged around six.

The group stood on the shingle to be processed by Immigration Enforcement, with police officers and coastguard personnel also in attendance.

Crossings also continued back at Dover Marina, Kent, where Border Force cutter Speedwell docked at around 9.30am with a further 30 people on board.

Migrants are regularly intercepted in the area, despite it being one of the world’s busiest shipping lanes.

The group, all men who were wearing life jackets, were seen smiling and waving as they were brought ashore.

Pictures also showed one freezing individual wrapped in a towel while he was being pushed in a wheelchair by Border Force officers. 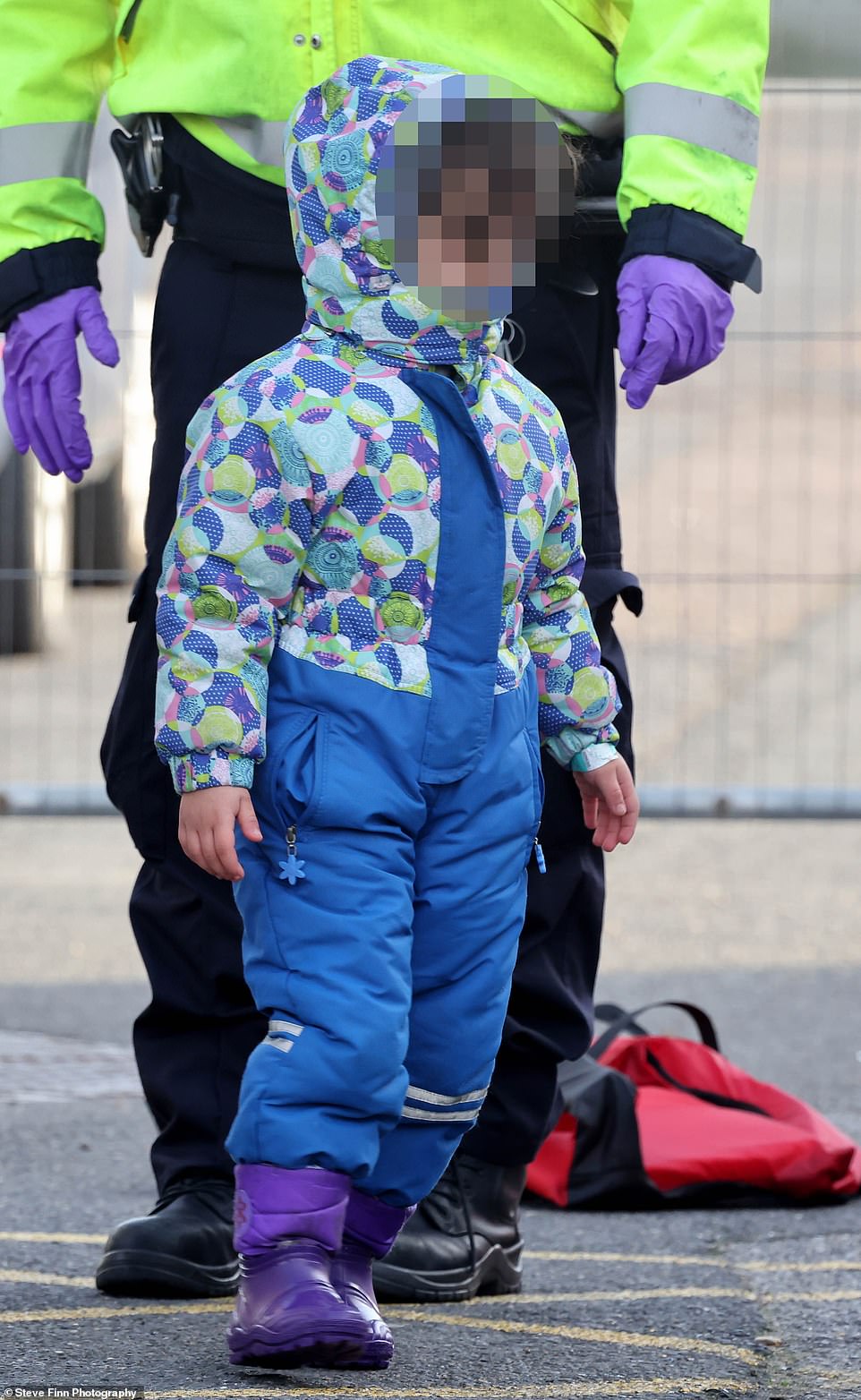 At least 100 migrants, including a child wrapped in blankets and snow boots (pictured), were intercepted on Wednesday morning, despite temperatures plunging below freezing overnight 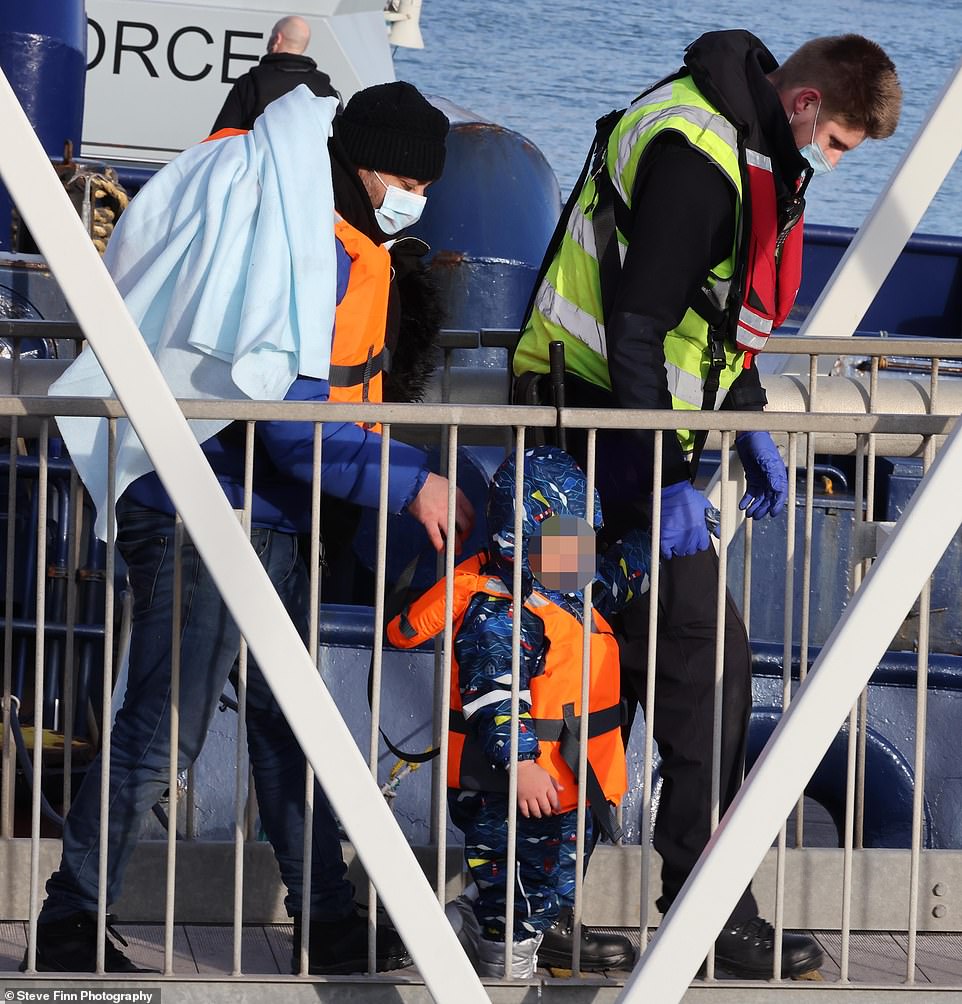 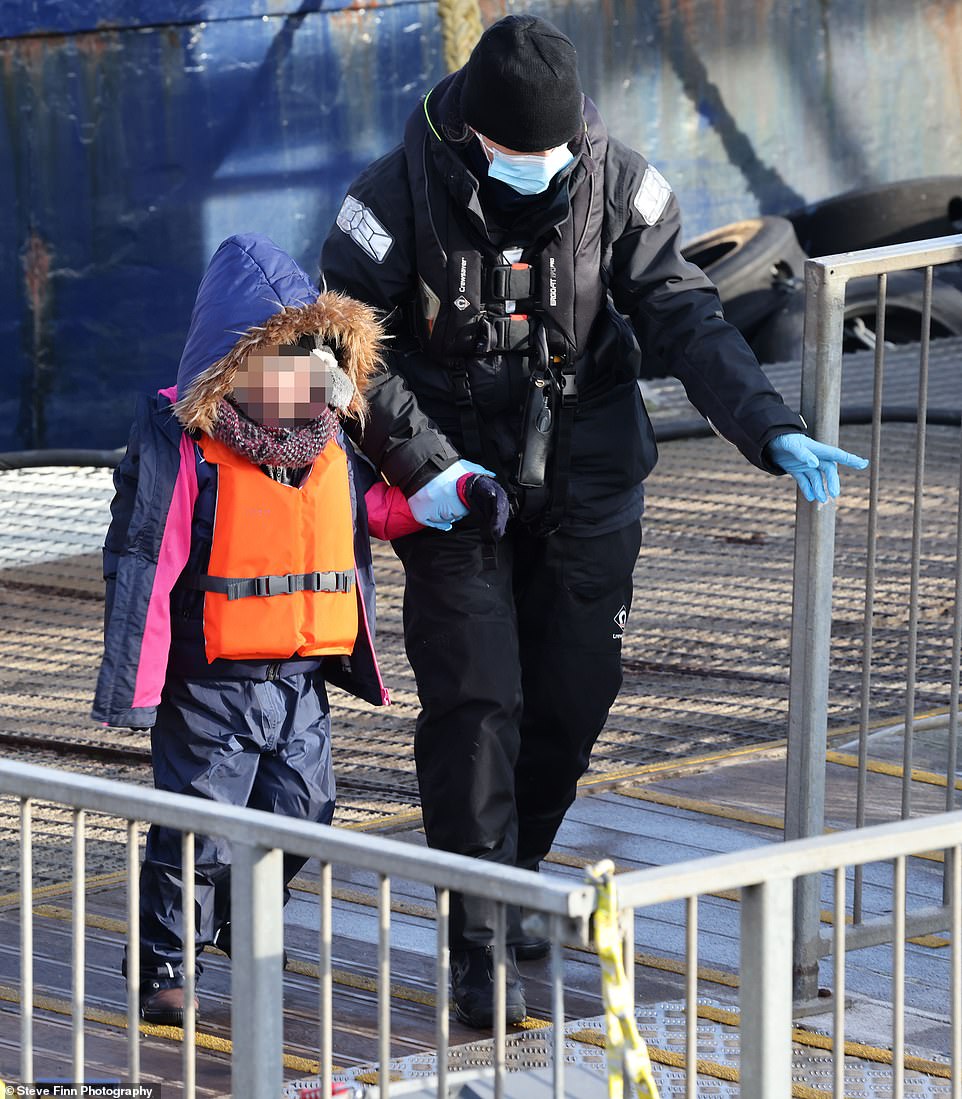 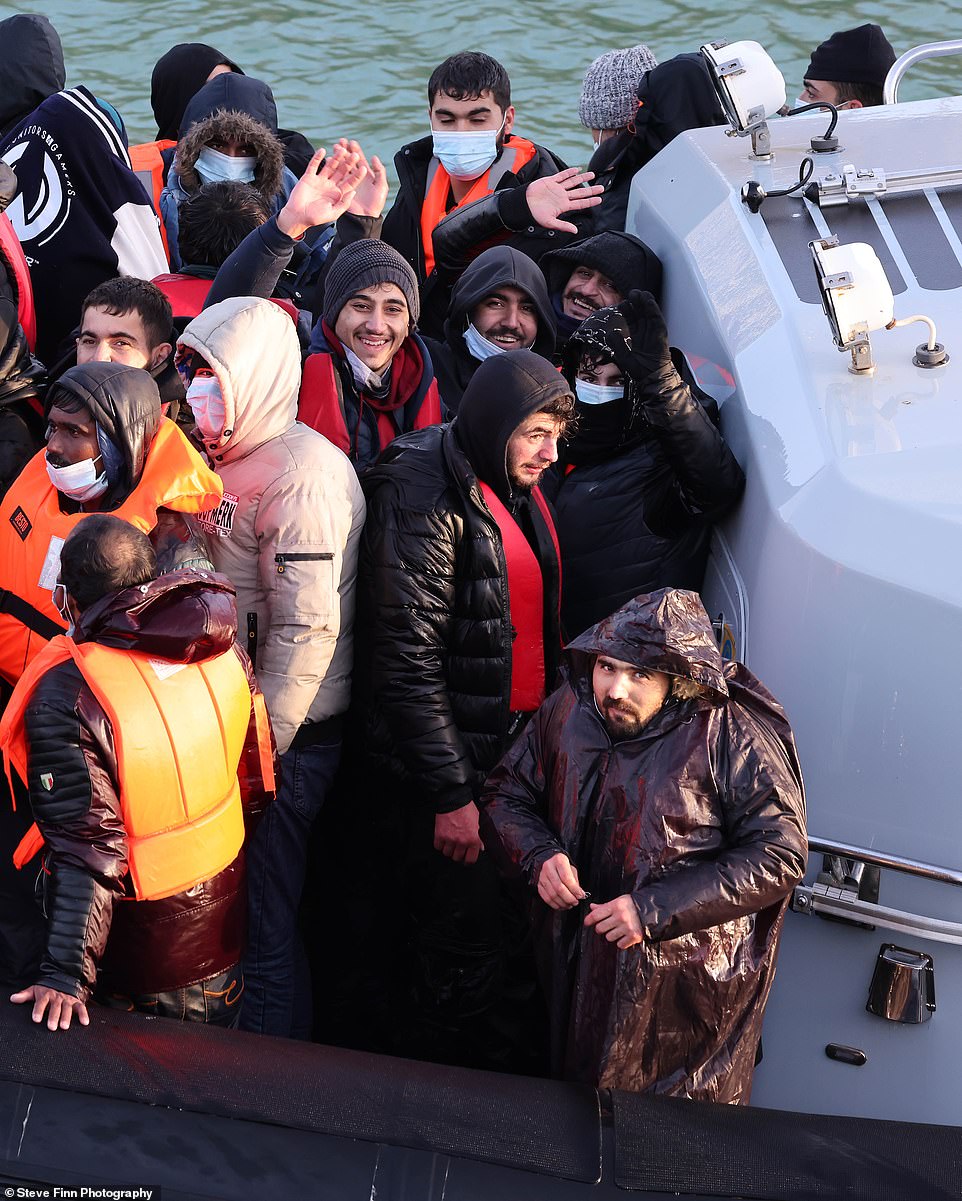 One group of migrants, all men wearing life jackets, were pictured smiling and waving as they were brought ashore to be processed by immigration officials 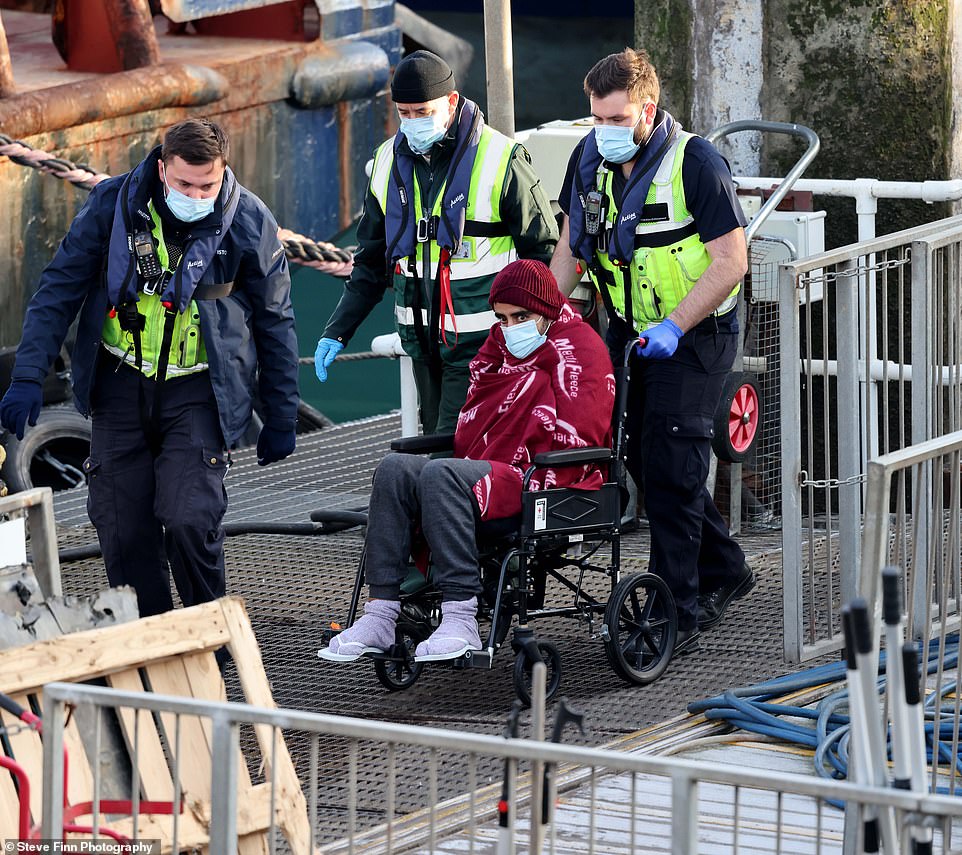 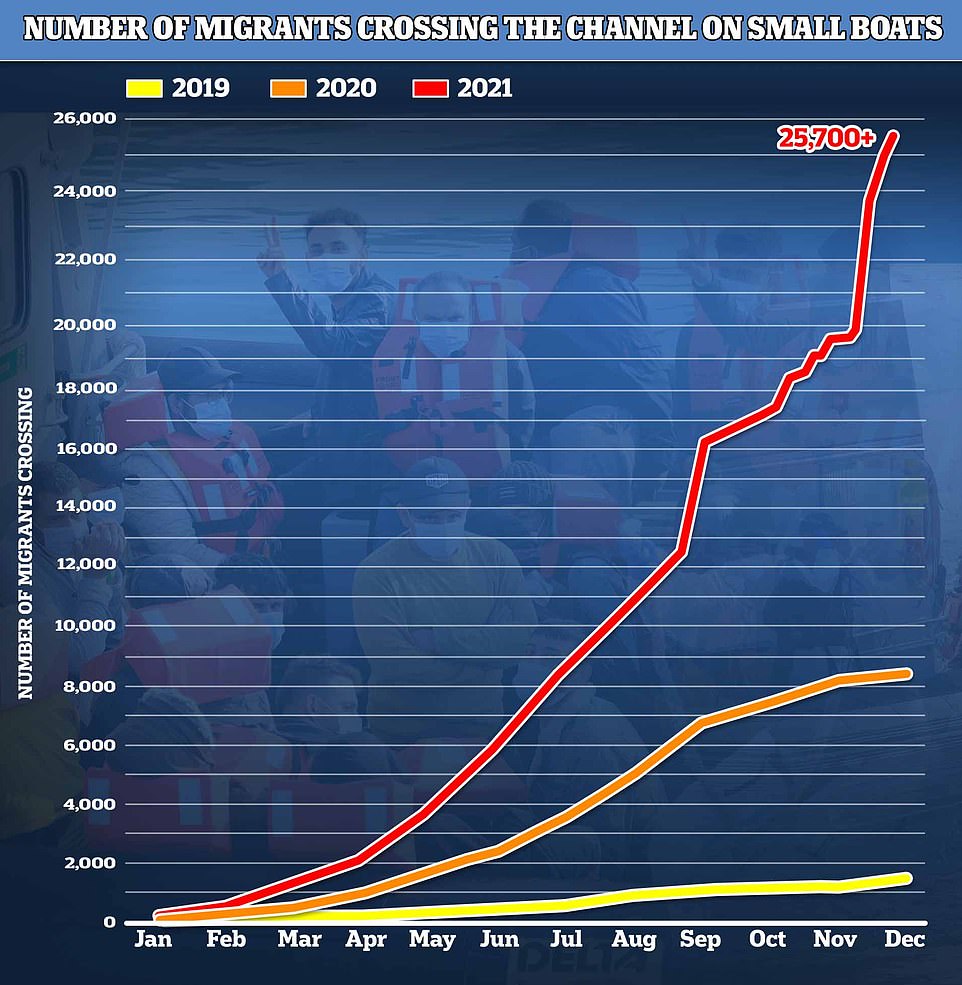 The Dover Lifeboat – the RNLB City of London II – then returned to harbour shortly afterwards at around 10am with another 30 migrants on board after attempting to make the crossing in a large inflatable boat.

Speedwell arrived back at Dover Marina at 10.30am with a further 20 people on board, including a tiny baby wrapped up in a blanket.

The arrivals took the total number of people to make the crossing so far in December to 1,409 in 47 boats.

That is more than six times the 211 who arrived in 16 boats throughout the same month last year.

Despite calmer conditions in the early hours, the weather at sea has turned treacherous with high winds making the already dangerous journey almost unviable.

However, there are ongoing search and rescue missions in the Channel with both large Border Force vessels Searcher and Hurricane on standby.

It comes as more than 28,000 migrants have crossed the Channel by boat so far this year.

The figure was surpassed after 82 people were rescued or intercepted in three incidents on Tuesday while making the most of calmer waters to make the crossing.

One group of around 30 migrants, who were wrapped in blankets and wearing life jackets, were brought into the Dover Marina, in Kent, at around 9am.

Among the migrants was a man who was seen carrying a young child over his shoulder as they disembarked.

French authorities also prevented at least 86 people from reaching the UK in four events on Tuesday, according to the Home Office.

Small boat crossings had briefly stopped due to high winds and strong tides in recent weeks, but have since restarted due to calmer waters in the Channel.

A total of 27 people, including seven women and a seven-year-old girl, are thought to have died when their boat sank during an attempted crossing. 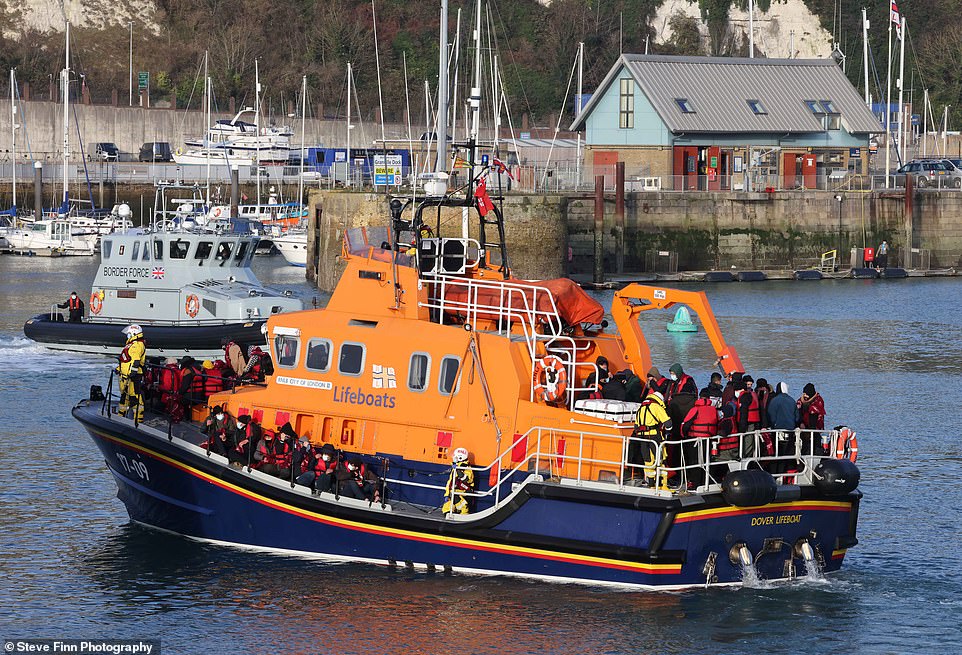 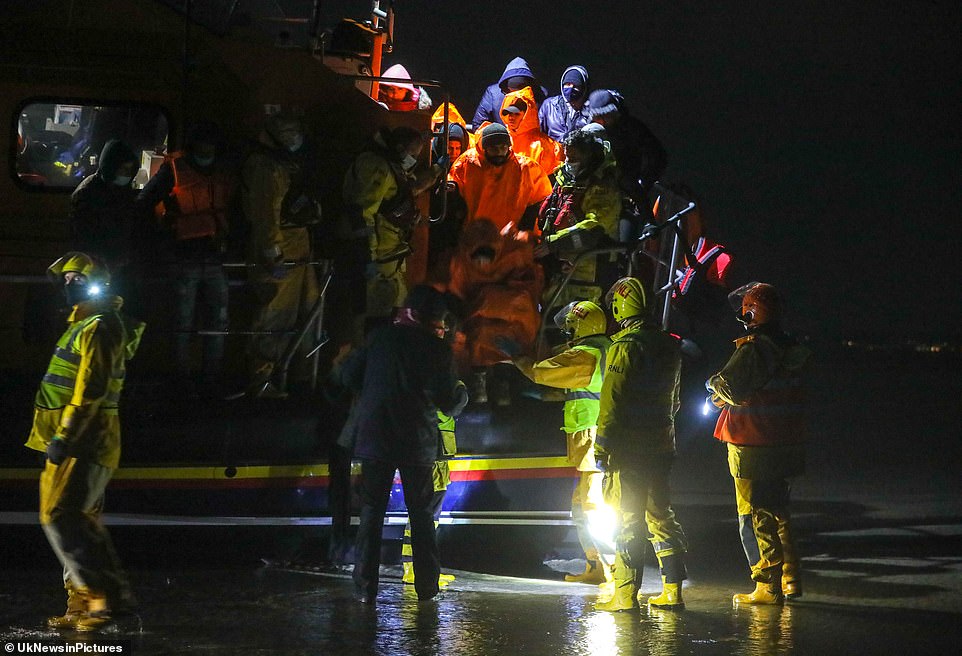 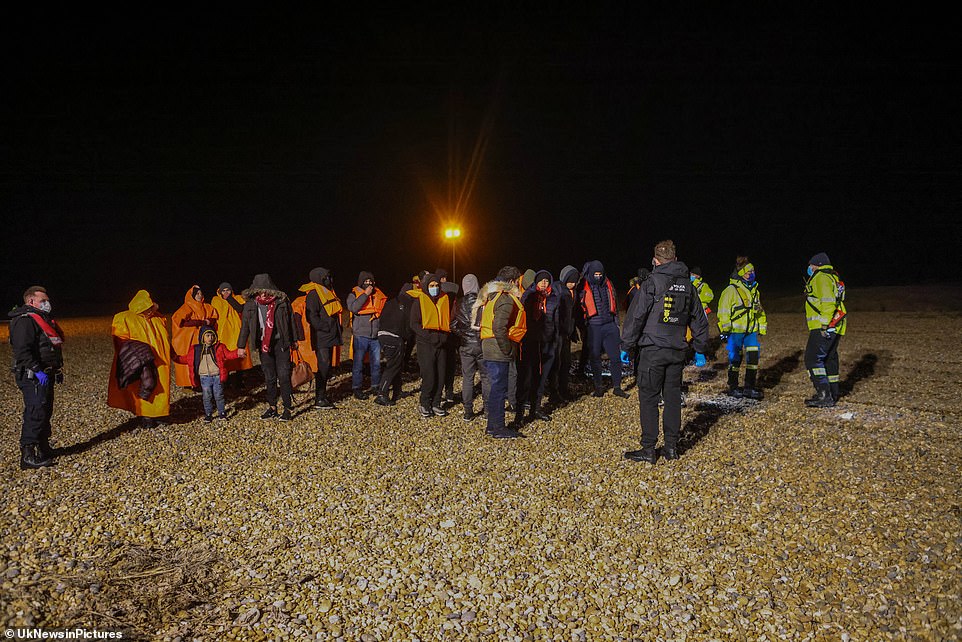 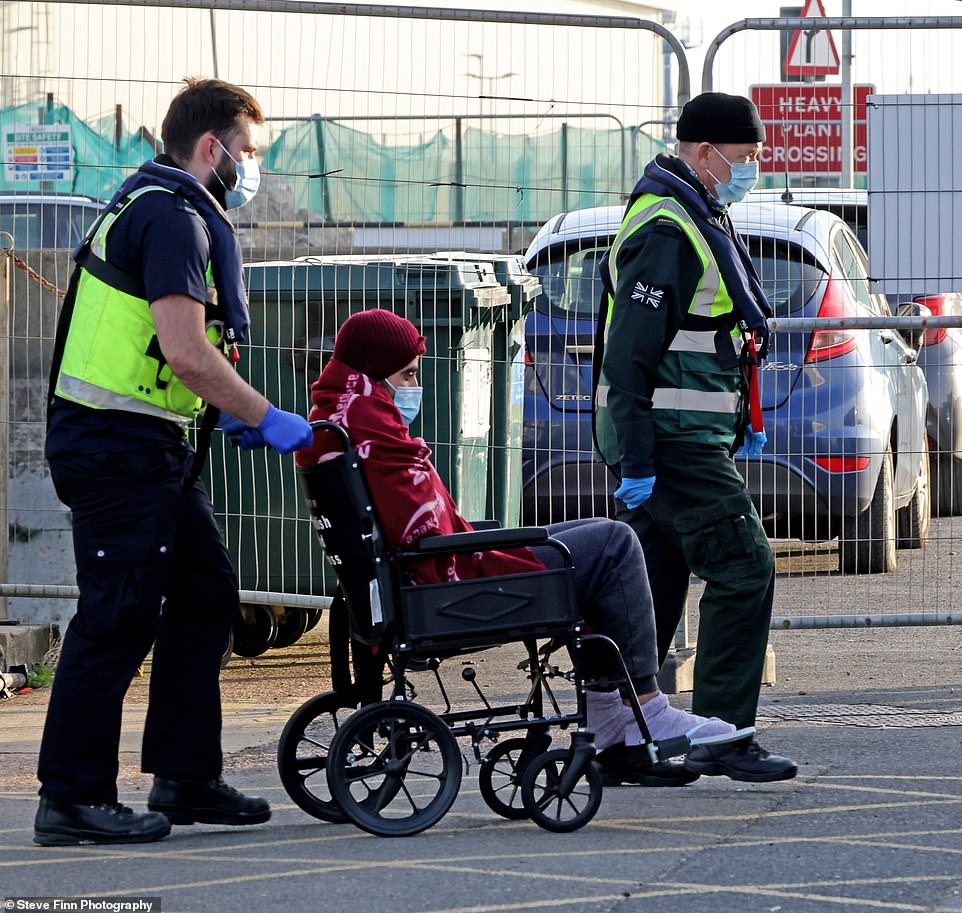 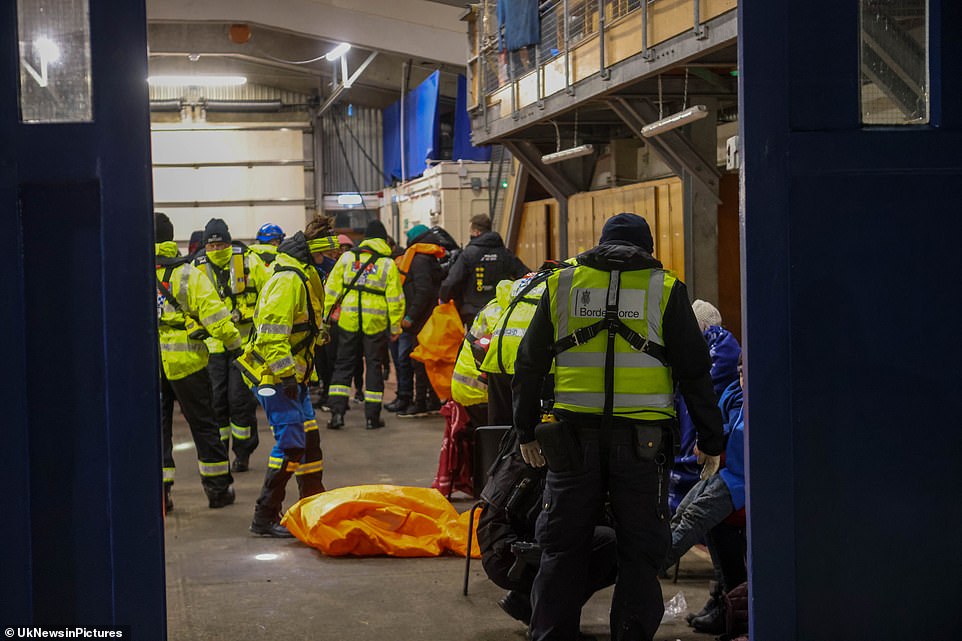 What happens to migrants after they arrive in the UK?

Migrants who have been picked up after landing or intercepted at sea are taken to a Border Force processing centre, usually near Dover

Here arrivals are triaged to identify any medical needs or vulnerabilities, fed and checked to see if they have a criminal record. Adults have an initial interview before being sent to accommodation centre across Britain, paid for by UK taxpayers and provided by private contractors.

The migrants are given £37.75 per week for essentials like food, clothes and toiletries while they wait for a decision on their asylum application. Kent County Council normally takes unaccompanied children into its care, although other local authorities are also involved in this programme.

Other migrants might be kept in a detention centre ahead of a plan to send them back to Europe. However, just five were deported last year as ministers admitted to ‘difficulties’.

Dan O’Mahoney, Clandestine Channel Threat Commander, said: ‘Last month’s tragedy is a devastating reminder of the dangers of Channel crossings and we are determined to work with our European and international partners to target the ruthless organised criminal gangs behind them.

‘People planning to make the journey should claim asylum in the first safe country they reach instead of risking their lives by crossing the Channel from a safe EU country.

‘The Government’s New Plan for Immigration will be firm on those coming here via illegal routes and fair for those using safe and legal routes. This will reduce the pull factors in the current asylum and immigration system.’

It came as the Inspectorate of Prisons and the Dover and Heathrow Independent Monitoring Boards (IMB) – made up of volunteers tasked by ministers – published their findings on migrant detention facilities visited in the last three months.

Women who said they had been raped by smugglers were ‘not adequately supported’ and lone children were being held with unrelated adults, the report said.

Tom Pursglove, minister for justice and tackling illegal migration, said: ‘For nearly two decades the public have been crying out for the broken asylum system to be reformed and that’s what this Government is delivering.

‘The Nationality and Borders Bill, which was backed by a majority of 67 MPs this month, will make it a criminal offence to knowingly arrive in the UK illegally, and introduce life sentences for those who facilitate illegal entry into the country.

‘The sooner the House of Lords passes the Bill in the new year, the sooner we can break the business model of the people smugglers, protect those in genuine need of asylum, and ensure the swift removal of those with no right to be here.’

A joint statement released by the Home Office also said they also discussed the mounting migrant crisis in eastern Europe which Britain accused Belarus and Russia of engineering to undermine European unity.

Miss Patel and Mr Darmanin said: ‘Tonight, the Home Secretary spoke to her French counterpart Gerald Darmanin to discuss the problem of small boats crossing the Channel and the operational response to it.

‘Both the Home Secretary and Interior Minister agreed to strengthen operational cooperation further. More must be done to stop the dangerous crossings. They agreed to accelerate the delivery of the commitments made in the joint agreement of July 2021 to deliver on their joint determination to prevent 100 per cent of crossings and make this deadly route unviable.’