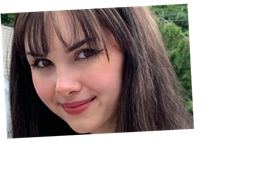 Before the killer of 17-year-old social media influencer Bianca Devins was sentenced Tuesday to 25 years to life in prison, her family confronted him Tuesday in a New York courtroom.

"I have to live the rest of my life knowing I had to say goodbye to my sister in a funeral home, and I don't even know if she heard me," Olivia Devins said at the sentencing, reports the Observer-Dispatch. "I am now 17 years old; my life has just begun, but this is when Bianca's was taken."

Kim Devins, Bianca's mother, asked Oneida County Judge Michael Dwyer "to make sure that Brandon Clark remains in prison for the rest of his life, so that he cannot harm anyone else and inflict this horrific pain on any other family," reports CNN.

Clark, 23, pleaded guilty last February to second-degree murder in Devins' July 2019 stabbing death, which he documented by posting images of her body on social media.

Clark afterward placed a 911 call and then stabbed himself in the neck as officers moved in on him after he laid down atop her body, which was under a green tarp on the ground outside of a parked SUV on a dead-end street in Utica. As officers watched, police said Clark pulled out a cell phone and "took self-photographs of himself laying across the deceased female."

The murder occurred after the two returned from attending a concert together the night before in New York City, not long after Devins, a popular TikTok star, had met Clark through Instagram. Devins' sister said that she had to remove herself from social media to avoid seeing images of her sister's murder. The tragedy fed the hashtag #RIPBianca and fueled online outrage about the images that were circulated on Discord, Instagram and other social media platforms.

"Many random people set their profile pictures as my sister's death photo and went on my page knowing I would, without a doubt, see it," Olivia Devins said in court, reports CNN. "The picture, to this day, continues to be sent to me, but I now have all of my social media accounts deleted."

Clark addressed his victim's family before he was sentenced.

"How do you meaningfully apologize for doing something so horrible, so irreversible?" he asked, according to the Observer-Dispatch. "That's the worst part, I can't take it back."

The judge interrupted Clark, noting that Clark had tried to withdraw his guilty plea at a hearing last summer while his sentencing was delayed. "It seemed like in the beginning you were focused on the family, the pain that you caused that family. But somewhere in the interim, you started to focus on yourself. And that was what was confusing to everyone. You were more worried about yourself than Bianca."

Clark told the judge he meant it when he said he didn't want to force the Devins family to go through a trial, but at the time when he tried to change his plea, he believed he might have received better help with his mental health.

Devins' grandfather, Frank Williams, said the family would stand firm in opposing any future efforts to parole Clark. He also said they plan to create a scholarship in her name and advocate for laws that would hold social media companies accountable for graphic content.

He spoke to reporters after the sentencing about the "deep pain this man's cruelty has done," acknowledging the statements made by Devins' mother and sister. "And today we utter his name for the last time," he said.

17/03/2021 World News Comments Off on At Sentencing, Family of Slain Influencer Confronts Man Who Murdered Her, Posted Photos of Killing
Lifestyle