Triple trouble for house sales: Backlog could see THOUSANDS miss out on stamp duty holiday as number of mortgage deals halves and cost of a two-year fixed deal up £600

Homebuyers are facing a triple blow which could see hundreds of thousands miss out on the Chancellor’s stamp duty holiday because of delays in getting purchases over the line.

New figures suggest some 325,000 buyers will not complete before the March 31 deadline because of issues with conveyancing, surveying, mortgage and search services.

At the same time, buyers are also facing rising interest rates on mortgage deals, with borrowers now typically having to pay £600 more over the course of a two-year fixed deal than at the start of the summer.

And there is a mortgage deal drought, with the number on offer from banks and building societies halving since the start of the year. 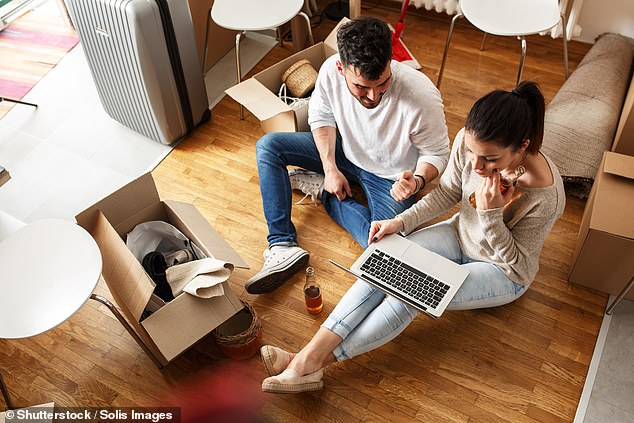 Experts warn that lenders are increasingly nervous about the ‘fragile’ state of the housing market and fear there are ‘darker times ahead’.

Last week official figures revealed house prices surged in every region in August as the stamp duty exemption on property values up to £500,000 fuelled a sales boom.

But economists have predicted that the rally could soon reverse as the Government scales back financial support for households and businesses.

Earlier this year, the Chancellor increased the threshold for paying stamp duty from £125,000 to £500,000 until the end of March next year.

However, the property market, from lenders to solicitors, is currently struggling to cope with unprecedented demand from buyers looking to cash in on the tax holiday.

There are delays in everything from buyers securing mortgages, to getting searches done and to completing all the legal paperwork.

It is currently taking buyers an average of 160 days – more than five months – to go from agreeing a sale to moving in, up from 95 days last year according to property data analysts TwentyCi.

It means an estimated 325,000 property owners with sales agreed between September and January may fail to complete in time as they get caught in the logjam, at a cost of £4 billion to the economy, according to the data firm.

At the same time, the total number of mortgage deals available has dropped 55 per cent since January, from 2,477 to 1,099, according to figures from analysts Defaqto.

Many high street banks have axed deals for borrowers with small deposits of 5 or 10 per cent altogether.

But there is also increasingly less choice for buyers with medium and even large deposits.

There are now just 125 two-year deals for those with a 15 per cent deposit, down from 264 in March, according to separate data from Moneyfacts.

The number of five-year deals for those who can put down 20 per cent has dropped from 257 to 164.

Dominik Lipnicki, of advisers Your Mortgage Decisions, said: ‘Lenders appear to be worried about just how fragile the property market really is and if the current crisis will result in house price falls.

‘We have seen a post-lockdown boost, aided by Rishi Sunak’s stamp duty scheme but many agree this may well have been a temporary recovery with darker times ahead.’

A spokesman for banking body UK Finance said: ‘Rates offered will be influenced by several factors including the lender’s funding and operating costs, risk appetite and provision for any potential losses over the life of the loan.’