China and Australia's trade dispute over coal threatens to escalate into a wider spat over climate change and net-zero emissions targets.

The Morrison government will use China’s indefinite ban on Australian coal to accuse Beijing of skirting its climate change commitments, as it responds to a major trade strike on Australia's second largest export. 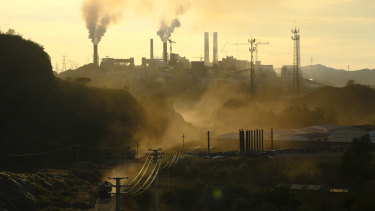 Prime Minister Scott Morrison on Tuesday said that coal imports from other countries "have 50 per cent higher emissions" than Australian coal. "As a result, that would be a bad outcome for the environment," he said.

Trade Minister Simon Birmingham earlier said China would have to increase its local production and imports from Indonesia, Russia and Mongolia, whose thermal coal produces emissions higher than Australia's.

Chinese state media on Monday confirmed a formal ban on thermal coal imports after months of Australian exports being stranded offshore. The strike on thermal coal, which is used to generate electricity, is the latest in half-a-dozen trade hits on Australian products after a year of rising tension over human rights and national security policies.

The government on Tuesday described China's actions as "unacceptable" and warned a ban on Australian coal would be in breach of World Trade Organisation obligations and the China-Australia Free-Trade Agreement.

In a challenge to China's target of net-zero emissions by 2060, Senator Birmingham said China would have to use dirtier coal from other sources and that would generate more pollution.

"[That] will do anything but help China in terms of meeting some of the commitments it has made to the world around emissions reduction," he said.

Australia has not committed to a net-zero emissions target despite rising international pressure to follow South Korea, Japan, Europe and the UK in reaching the milestone by 2050.

Simon Nicholas, from the Institute for Energy Economics and Financial Analysis challenged the Morrison government's claim, pointing out that Australian coal would still be diverted and burnt in the major export markets of Japan, South Korea and Taiwan.

“If China takes coal from elsewhere, another country that would normally take that coal would have to get theirs from Australia. One source switches to another, but the same energy content will be burnt.”

Mr Nicholas said India and China were ramping up their domestic coal production to reduce reliance on imports which meant the thermal coal outlook was “increasingly bad, at an accelerating pace”.

Up to $14 billion in coking and thermal coal is exported to China each year, making up 21 per cent of Australia's export market.

S&P Global Platts analyst Deepak Kannan said there were several other markets where Australian cargoes could find home like south-east Asia and north-east Asia. "Vietnam and the Philippines have emerged as some key buyers for Australian coal while South Korea and Taiwan are also centres of stable demand," he said.

But the Australian coal industry now faces an accelerating long-term sustainability threat through the combination of trade, political and climate pressure.

The falling cost of wind and solar power, coupled with commitments for net-zero reduction of carbon emissions by 2050 from major markets like Japan and South Korea, is expected to cause renewable energy to replace coal-fired power around the world in coming decades.

Mr Simington said Australia’s thermal coal exports were expected to remain relatively stable over the short-term, but the industry’s future was uncertain after the next three to four years.

"Details pertaining to the ban remain scarce, though clearly this shift from the Chinese government has non-trivial implications for Australia’s growth outlook," JP Morgan said on Tuesday.

Labor on Tuesday ratcheted up its criticism of the Coalition's handling of the dispute, signalling it was ready to ditch its mostly bipartisan consensus on China trade policy amid an internal battle over its direction on climate change.

Labor's resources spokesman Ed Husic said he was particularly concerned for coal-mining communities across the country who depend on the exports for their livelihood.

"If you look at it, coal mining in this country generates roughly 46,000 jobs," he said. "When you consider the export dollars that are earned through this sector, nearly $70 billion, there is a lot riding on sorting this issue out."

The peak body for Australian businesses in China on Tuesday evening warned business confidence had fallen sharply in the wake of plummeting bilateral relations and multiple trade strikes on beef, barley, wine and other sectors.

“Our members are fearful of significant job losses to come, particularly from those in the wine industry, as Chinese imports from Australia are curtailed,” AustCham China chief executive Nick Coyle said.

15/12/2020 World News Comments Off on ‘Bad outcome’: Australia to use coal strike to challenge China on emissions
Lifestyle