London: British street artist Banksy has accused European officials of ignoring maritime distress calls from non-Europeans after he helped fund a rescue vessel to deliver humanitarian aid to migrants who have been stranded in the central Mediterranean for days.

Hundreds of migrants were transferred to several rescue ships on Saturday as international aid groups urged European officials to let them come ashore. One of the vessels, the Louise Michel, was funded by Banksy. 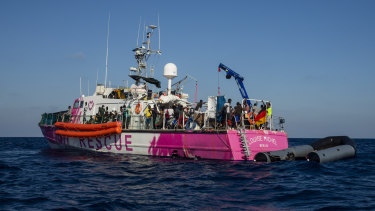 The Louise Michel rescue vessel with people rescued on board.Credit:AP

According to a series of posts on the Louise Michel's Twitter account, the ship set out Thursday to help 89 people on a rubber dinghy. During its mission, it came across another ship with about 130 people, who were also rescued. At that point, with more than 200 people aboard, the Louise Michel's crew of 10 could no longer steer the ship and issued a distress call.

The ship was near Lampedusa, an Italian island off the African coast that has become a gateway to Europe for migrants. The Italian Coast Guard, responding to the distress call, said it had taken in 49 passengers it considered the most vulnerable, as well as the body of a migrant who had died before being transferred to the Louise Michel.

About 150 more migrants were moved to the Sea-Watch 4, a humanitarian ship that already had about 200 rescued migrants onboard and was itself in search of a port. An additional 27 migrants from Libya, including children, have been onboard the commercial vessel Maersk Etienne for more than three weeks. 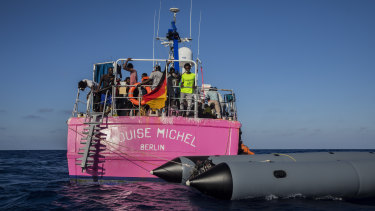 The Louise Michel rescue vessel with people rescued on board, after performing 2 rescue operations on the high seas in the past days.Credit:AP

Banksy posted a video of the rescue mission on Instagram on Saturday that showed images of migrants in distress, overlaid with the words "Like most people who make it in the art world, I bought a yacht to cruise the Med."

It continued, "It's a French navy vessel we converted into a lifeboat because EU authorities deliberately ignore distress calls from 'non-Europeans.'"

The Louise Michel, a former French patrol boat, has the word "rescue" emblazoned on it in pink and features a Banksy painting of a girl in a life jacket stretching her arm toward a heart-shaped safety buoy.

On Saturday, the United Nations refugee agency and the International Organisation for Migration issued a joint statement calling for European officials to allow the more than 400 migrants onboard the various rescue vessels to come ashore.