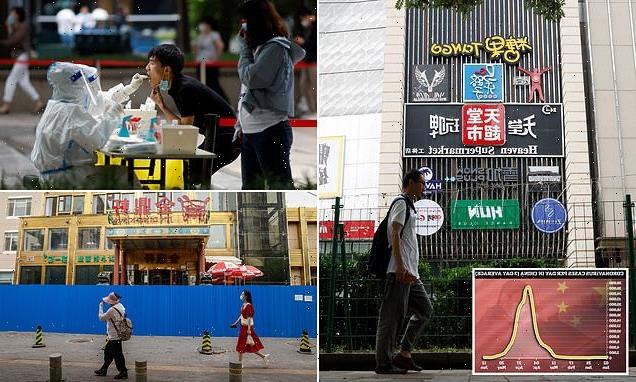 Beijing launched a massive new coronavirus crackdown on Monday amid a ‘ferocious’ Omicron outbreak that is believed to have spread from just one person, as China continues its brutal zero-Covid policy.

Nearly 200 cases have now been linked to the centre Heaven Supermarket Bar, which had just reopened as curbs in Beijing eased last week.

The situation highlights how hard it will be for China to make a success of its ‘zero COVID’ approach – which sees measures enforced when any number of cases are detected – as much of the rest of the world opts to learn how to live with the virus.

Dine-in service at Beijing restaurants resumed on June 6 after more than a month in which the city of 22 million people enforced various COVID curbs.

Many malls, gyms and other venues were closed, parts of the city’s public transport system were suspended, and millions were urged to work from home. 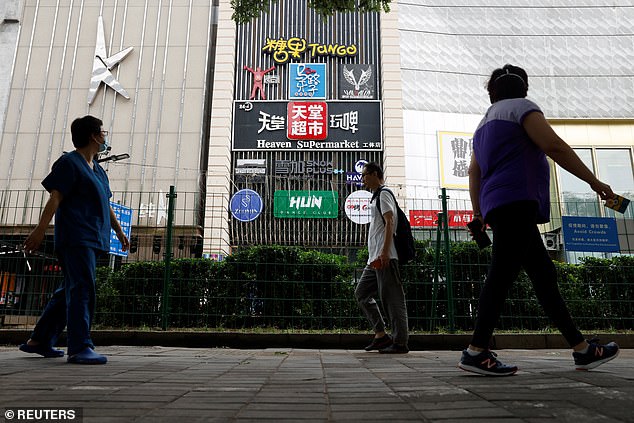 People walk past fences outside the Heaven Supermarket bar, where a coronavirus disease (COVID-19) outbreak emerged, in Chaoyang district of Beijing, China June 13, 2022. The bar has been linked to almost 200 cases of Covid-19

As dine-in curbs were lifted, the Supermarket Bar – modelled as a large self-service liquor store with chairs, sofas and tables – reclaimed its popularity among young, noisy crowds starved of socialising and parties during Beijing’s COVID restrictions.

The bar, where patrons check aisles to grab anything from local heavy spirits to Belgian beer, is known among Beijing revellers for its tables plastered with empty bottles, and customers falling asleep on sofas after midnight.

But a night of partying by one Beijing resident last week threw the city’s tentative reopening into chaos, leading authorities to shutter nightlife venues in the downtown district of Chaoyang days after they reopened last Monday.

The resident, who did not get tested for 14 days, went to several bars and nightlife venues in Chaoyang in the days before and after developing a fever.

‘We have to test every day now. It’s a bit of a hassle, but it’s necessary,’ said a 21-year-old resident surnamed Cao, who runs a convenience store in Beijing’s largest district Chaoyang, where the bar cluster was discovered.

Chaoyang kicked off a three-day mass testing campaign among its roughly 3.5 million residents on Monday.

About 10,000 close contacts of the bar’s patrons have been identified, and their residential buildings put under lockdown, and some planned school reopenings in the district have been postponed.

Queues snaked around some testing sites on Monday for more than 100 metres, according to Reuters’ eyewitnesses.

Large metal barriers have been installed around several residential compounds, with people in hazmat suits spraying disinfectant nearby.

The re-emergence of COVID infections is also raising new concerns about the outlook for the world’s second-largest economy.

China is only just shaking off a heavy blow from a two-month lockdown of Shanghai, its most populous city and commercial nerve centre, that hit global supply chains. 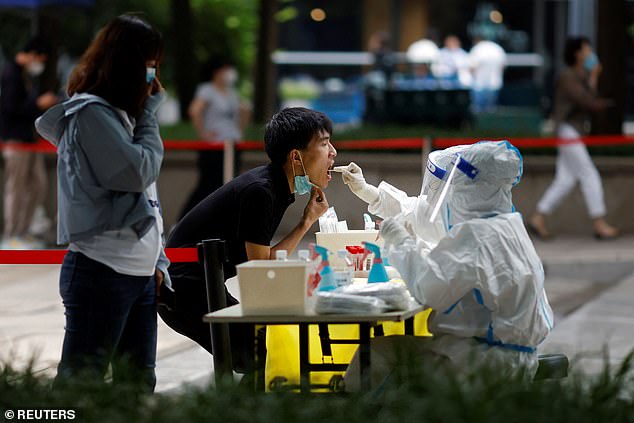 A medical worker in a protective suit collects a swab from a resident at a makeshift nucleic acid testing site, during a mass testing for the coronavirus disease (COVID-19) in Chaoyang district of Beijing, June 13 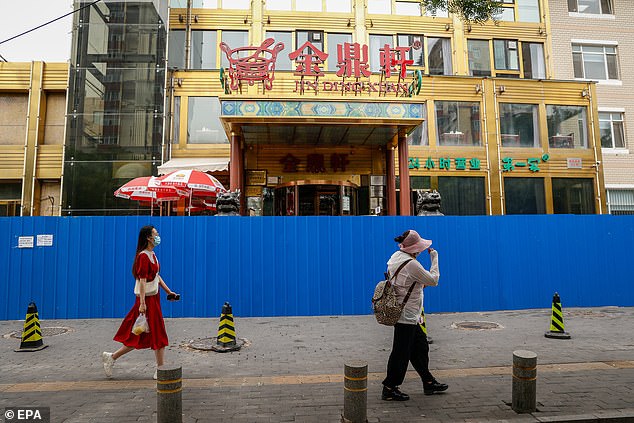 People walk along a fenced-off restaurant in Chaoyang district, Beijing, June 13. Large metal barriers have been installed around several of the city’s residential compounds, with people in hazmat suits spraying disinfectant nearby

The outbreak stemming from the Heaven Supermarket bar has infected at least 183 people in 15 districts so far. The people infected live or work in 14 of the capital’s 16 districts, authorities have said.

The cluster ‘arrived with ferocious momentum and the difficulty of prevention and control is huge,’ Beijing government spokesman Xu Hejian told reporters Sunday.

Officials have not commented on the exact cause of the outbreak, nor explained why they are not yet reinstating the level of curbs seen last month.

The bar cluster was caused by loopholes and complacency in epidemic prevention, state-backed Beijing Evening News wrote in a commentary piece on Monday.

‘At a time when… normality in the city is being restored, the fall of Heaven Supermarket Bar means the hardship and effort of countless people have been in vain,’ the newspaper wrote.

If the outbreak grows, ‘consequences could be serious, and would be such that nobody would want to see,’ it added. 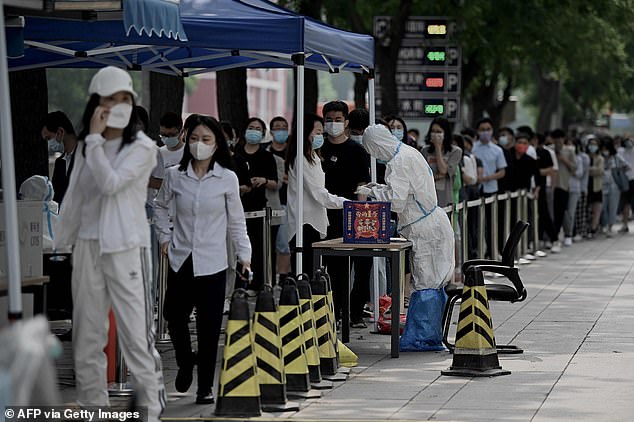 People queue at a swab collection site to test for the Covid-19 coronavirus in Beijing, June 13 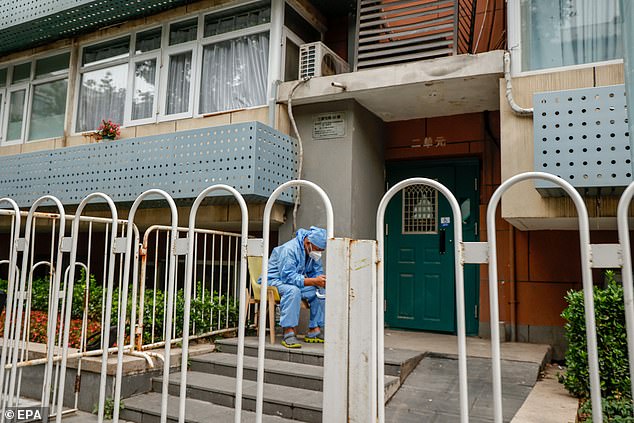 A security worker wearing a protective suit uses his phone in a neighbourhood under lockdown in Chaoyang district, Beijing, China, 13 June 2022

Heaven Supermarket Bar, and other businesses nearby, including the Paradise Massage & Spa, were under lockdown, with police tape and security staff blocking the entrances.

A handful of customers and staff at the parlour would be locked in temporarily for checks, authorities said.

Now, all sporting events have been cancelled, and a plan for most children to return to school Monday had already been scrapped.

In all, Beijing reported 51 cases for Sunday, versus 65 the previous day, in line with a national trend of falling cases.

As Beijing authorities wrestled with new COVID cases in April, retail sales in the capital shrank 16 percent year-on-year, while property sales nosedived 25 percent. Data for May, due later this month, is expected to be dire as well.

Before the bar cases, there had been high hopes for a rebound in June. 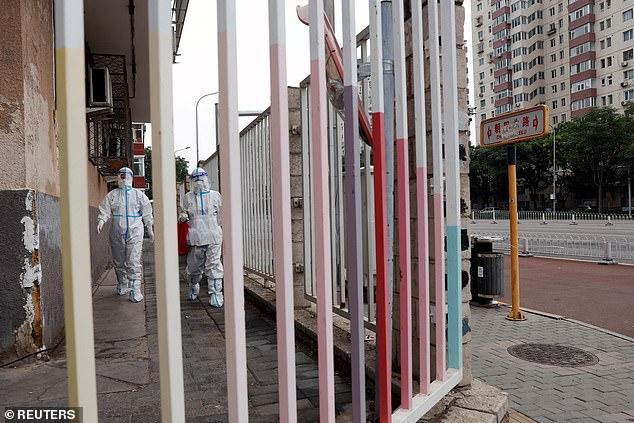 Workers in protective suits walk inside a residential area under lockdown, following a COVID-19 outbreak in Beijing, China June 13, 2022 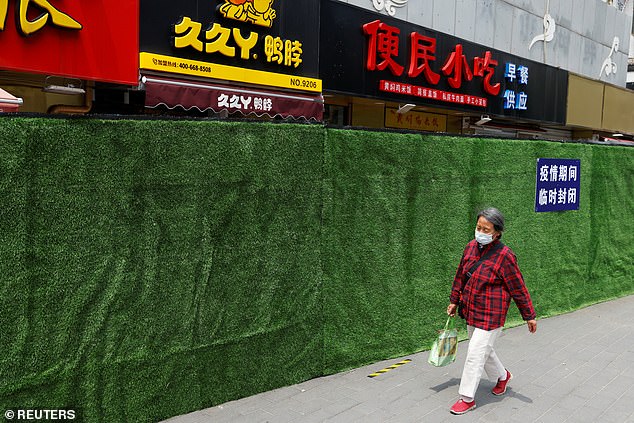 A woman wearing a face mask walks past a barricade sealing off a commercial area following a COVID-19 outbreak, in Chaoyang district of Beijing, China June 13

Meanwhile Shanghai, which completed mass testing for most of its 25 million residents at the weekend after lifting its lockdown and many of its curbs at the start of the month, reported 37 cases, up from 29.

In the city, 502 people have been linked to three positive tests detected June 9 among patrons of the Red Rose Beauty Salon. The individuals involved come from 15 districts across the city of 25 million people, prompting the first large-scale restrictions since the lockdown was formally ended June 1.

With mass testing and restrictions on movement back in force, streets and supermarkets emptied again over the weekend.

Failure to undergo testing will lead to a yellow code on a person’s health status app, forbidding them access to all public places.

Most students remain at home and all but a few restaurants are open only for takeout. Many customers simply partake of their food and drink on the steps beside blooming flower bushes outside the establishments.

While 22 million Shanghai residents were released from lockdown almost two weeks ago, 220,000 people are still restricted to their homes under a rule requiring that no positive cases are found within their residential compounds for more than 10 days. Another 600,000 are in control zones, where their movements are restricted within their compounds. 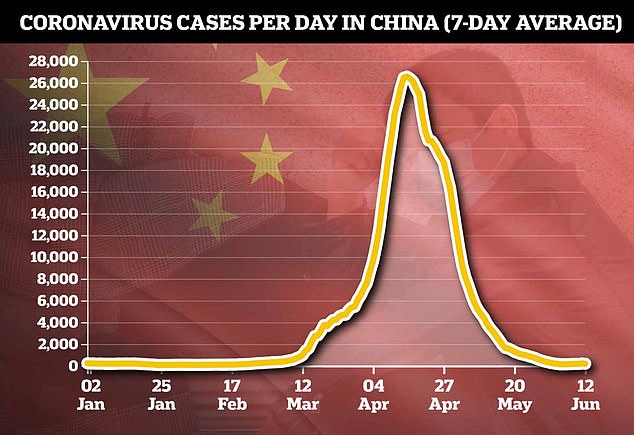 Corrugated steel fences and other barriers continue to block off neighborhoods and businesses, leading to further discontent and complaints from residents who remain in lockdown.

The strict implementation of lockdowns, along with a lack of information and poor distribution of food and other daily necessities, has led to rarely seen displays of anger and desperation.

Residents have confronted workers and police who have become known as “big whites” for the protective gear they wear, circulated protest videos online and coordinated nightly screaming and pot-banging events to let off steam.

The loosening of restrictions led to an exodus of non-Shanghai residents, including foreigners, who had found themselves trapped in the lockdown.

China has maintained its ‘zero-COVID’ policy despite considerable economic costs and an assertion from the head of the World Health Organization that the policy isn’t sustainable.

Nationwide, China reported just 143 cases, almost all in Beijing and Shanghai. The death toll from the outbreak in mainland China remained static at 5,226.