President Joe Biden attacked the ‘extreme’ Supreme Court for threatening rights and vowed to protect transgender children under threat from ‘cynical’ Republican laws as he signed a bill protecting same-sex and interracial marriage at a White House ceremony with Cyndi Lauper and Sam Smith.

In front of a crowd of drag queens and LGBTQ rights supporters, he went after GOP-led efforts to have the government intervene in gender-affirming care for minors – which have risen 13-fold in the last decade according to a recent study.

‘We need to challenge the hundreds of callous and cynical laws introduced in the states targeting transgender children, terrifying families and criminalizing doctors who give children the care we need,’ Biden said. ‘We have to protect these children so they know they are loved.’

Biden said the Respect for Marriage Act was needed because Justice Clarence Thomas suggested other cases based on Roe v. Wade’s precedent should be revisited –  including the 2015 landmark gay marriage decision Obergefell v. Hodges.

‘So sadly, I must acknowledge another reason we’re here,’ Biden told a crowd of thousands. ‘Congress is acting because an extreme Supreme Court has stripped away the rights afforded to millions of Americans that existed for half a century. 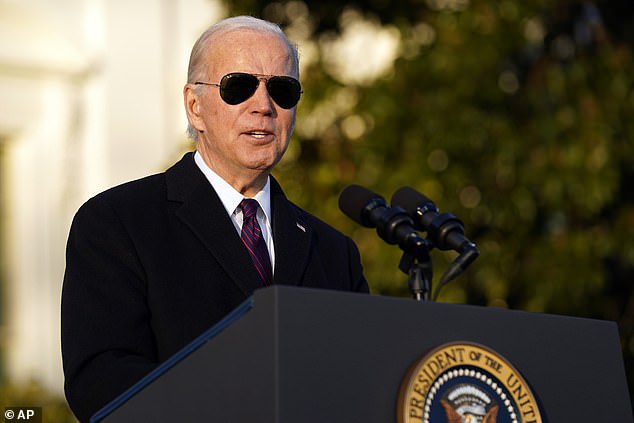 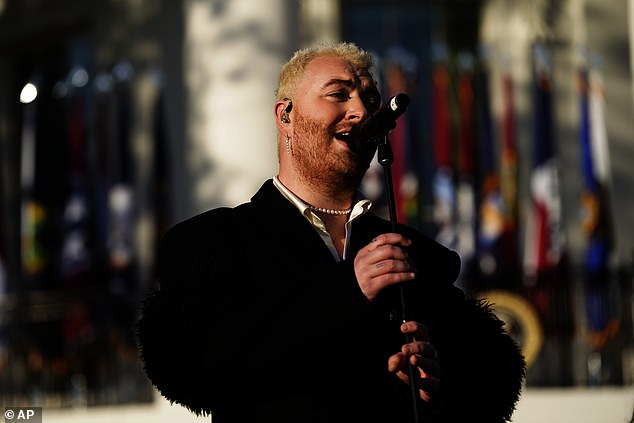 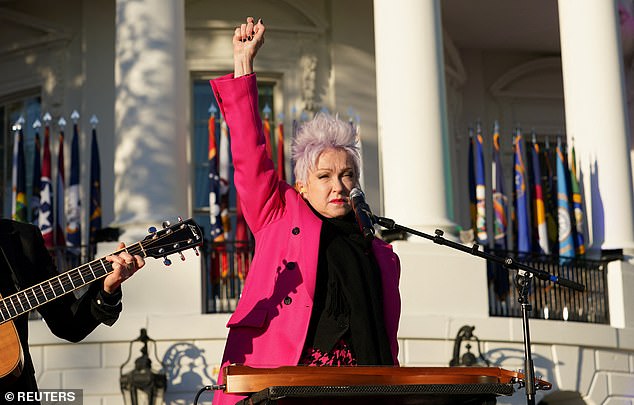 Biden said he wished to still sign the Equality Act, which would ensure LGBTQ  Americans with even greater protections, including in the workplace.

‘When a person can be married in the morning and thrown out of a restaurant for being gay in the afternoon – this is still wrong,’ the president said.

Suspect Anderson Lee Aldrich is facing five murder and hate crime charges for opening fire with an  AR-15-style rifle in the early hours of November 19.

‘We must stop the hate and violence like we just saw in Colorado Springs,’ he said.

Biden said signing the same-sex marriage bill was the act of pushing back against all kinds of intolerance.

‘Folks, racism, anti-Semitism, homophobia, transphobia. They’re all connected. But the antidote to hate is love,’ Biden said. ‘This law and the law that defends strike a blow against hate in all its forms.’

‘To be a non binary drag artist invited to the White House is something I never imagined would happen. Thank you President & Dr. Biden for inviting me to this historic bill signing. Grateful doesn’t begin to express the emotions I feel,’ Cummings wrote.

Brita Filter, who appeared on the 12th season of RuPaul’s Drag Race, chimed in and said she was invited too.

Prior to Biden’s passionate address, both Sam Smith and Cyndi Lauper performed.

Smith played their hit ballad Stay with Me, while Lauper performed True Colors. Lady Gaga’s Born This Way blasted over the speakers as soon as Biden signed the bill. 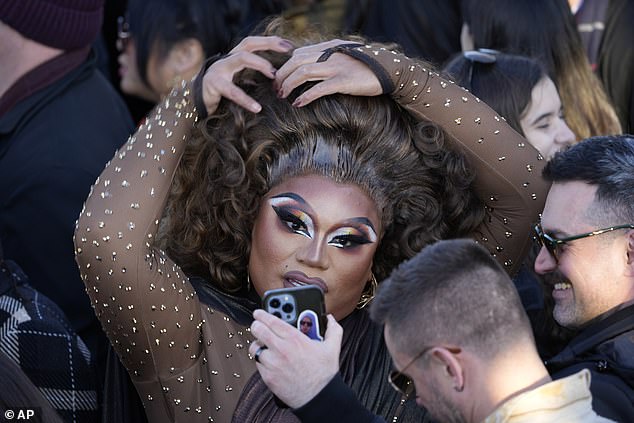 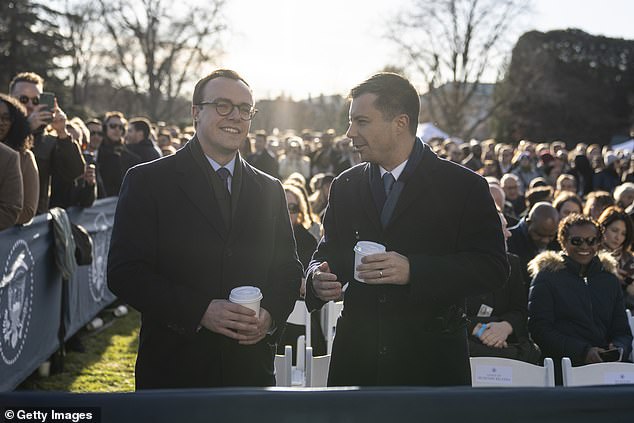 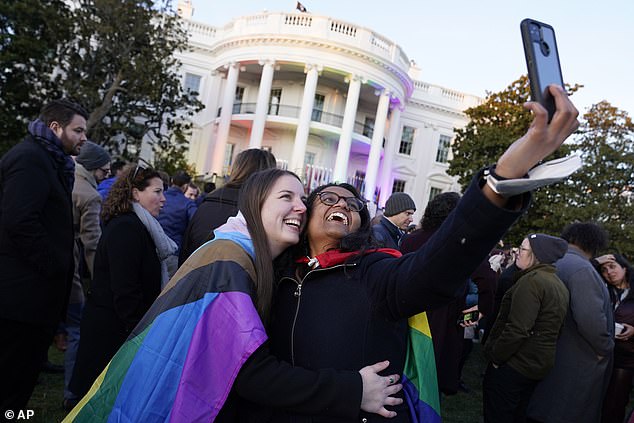 Aparna Shrivastava, right, takes a photo with her partner Shelby Teeter after Biden signed the act into law

He did so with plaintiffs from previous same-sex marriages court cases lining the White House’s stairs and surrounded by Democratic and Republican lawmakers.

Biden thanked Sen. Tammy Baldwin, a Democrat and lesbian, for being ‘a real hero,’ while also crediting Republican Sen. Susan Collins for getting the bill across the line.

Senate Majority Leader Chuck Schumer, who spoke at the top of the program, talked about how the legislation was ‘personal’ to him.

‘The tie that I’m wearing reminds me what this moment is all about,’ the New York Democrat said. ‘It’s the tie I ore the day my daughter got married to a beautiful young lady,’ he added, nothing that his daughter Alison is expected with wife Elizabeth.

Schumer gave a shout-out to Sen. Kyrsten Sinema, despite her announcement to leave th Democratic Party on Friday. She’ll still caucus with the Democrats.

House Speaker Nancy Pelosi, who will step down from her top leadership post at the start of the year, received raucous cheers.

She recalled how she signed the repeal of Don’t Ask, Don’t Tell as one of her last act when she originally signed as House speaker between 2007 and 2011. 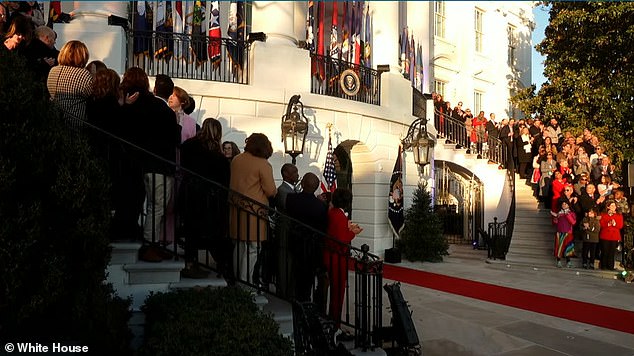 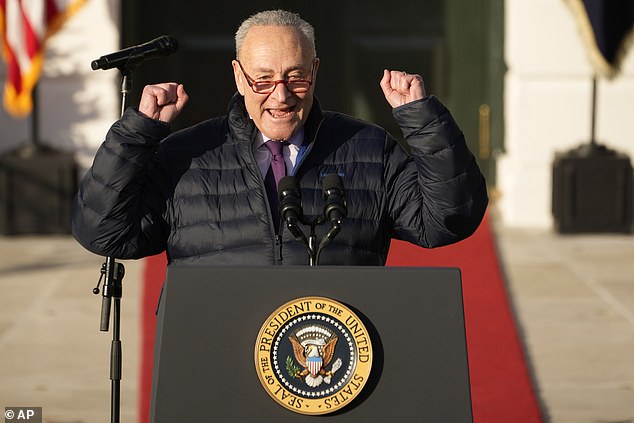 Senate Majority Leader Chuck Schumer, who spoke at the top of the program, talked about how the legislation was ‘personal’ to him as he has a lesbian daughter who is married and expecting a child with her wife

‘We tossed Don’t Ask, Don’t Tell into the dustbin of history,’ she cheered.

‘It’s fitting that one of my final act of speakership was to sign the Respect for Marriage Act,’ she noted.

Though Pelosi also said she wanted Congress to still pass the Equality Act, which the House passed, but it fizzled in the U.S. Senate.

Vice President Kamala Harris recalled her Valentine’s Day week of 2004. ‘When I had the honor to stand in San Francisco city hall and perform some of our country’s first marriages of same-sex couples,’ she said.

‘Let us think about today, December 13, 2022, a day when thanks to Democrats and Republicans we finally protect marriage rights in federal law,’ Harris said.

As Biden wrapped up his own remarks, he reflected on the recent release of WNBA star Brittney Griner and how he had gotten to know Griner’s wife Cherelle. 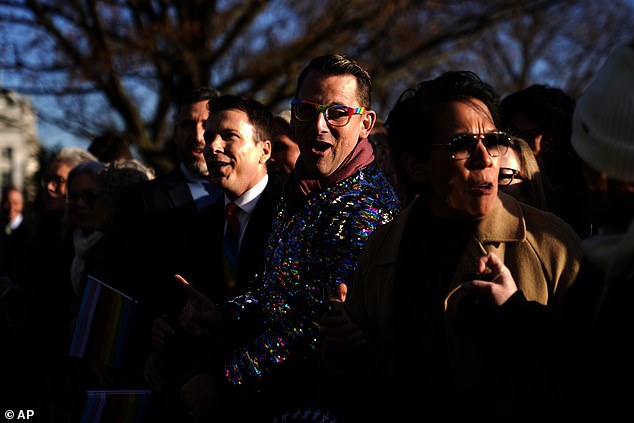 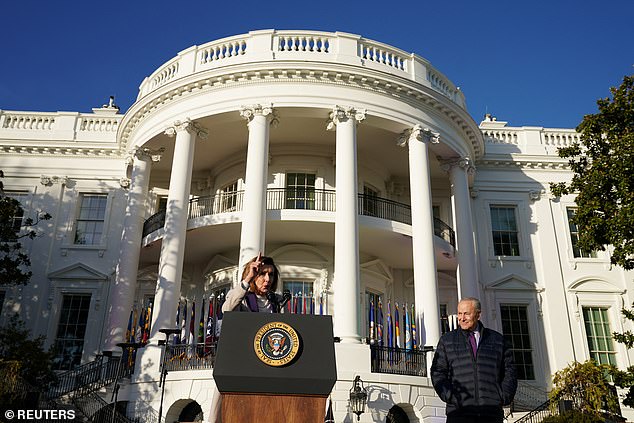 Directly before the ceremony, Lauper made a surprise appearance in the White House briefing room.

‘We can rest easy tonight because our families are validated. Because now we’re allowed to love somebody, which sounds odd to say, but Americans can now love who we love,’ said Lauper, a longtime ally of the LGBTQ community, who will perform at the afternoon ceremony.

‘And bless Joe Biden and all the people that worked on this for allowing people not to worry and their children not to worry about their future,’ Lauper continued.

The longtime pop star has violet bleached hair and wore a black pantsuit over a black shirt adorned with rhinestones.

‘So I brought a friend with me, who is an icon really, she doesn’t need any introduction,’ said press secretary Karine Jean-Pierre, ushering Lauper to the podium. 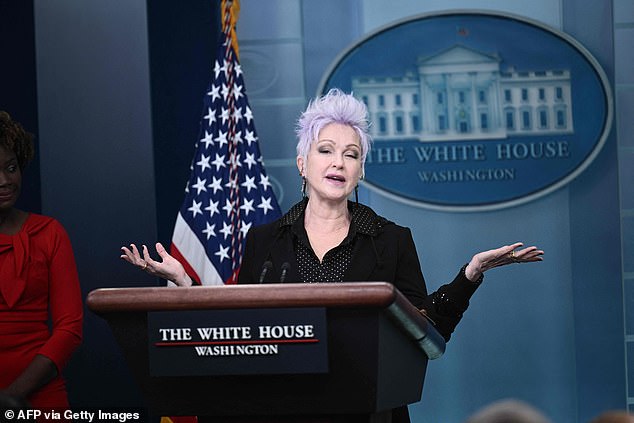 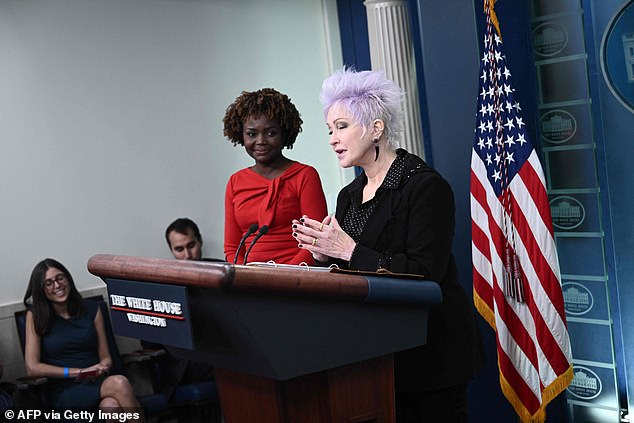 ‘We can rest easy tonight because our families are validated. Because now we’re allowed to love somebody, which sounds odd to say, but Americans can now love who we love,’ Lauper told reporters from the White House podium 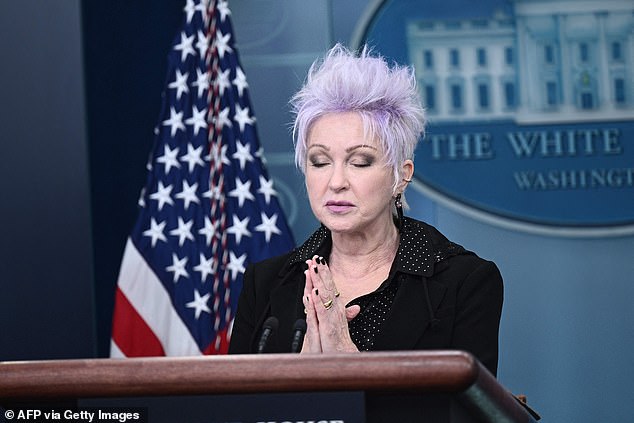 ‘Bless Joe Biden and all the people that worked on this for allowing people not to worry and their children not to worry about their future,’ Lauper said 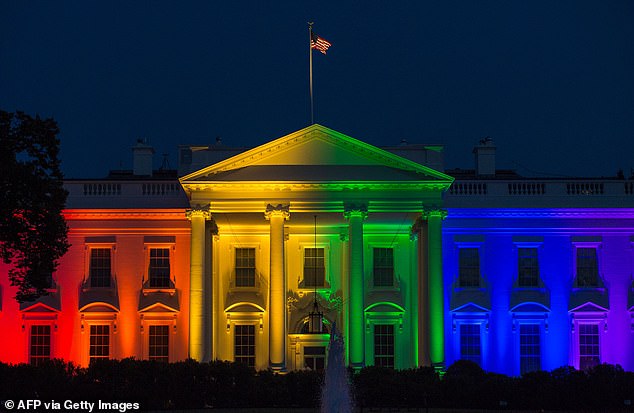 President Joe Biden will sign the Respect for Marriage Act Tuesday afternoon in a ceremony attended by thousands on the White House South Lawn. The White House was lit up in rainbow colors after in June 2015 the Supreme Court ruled in favor of same-sex marriage 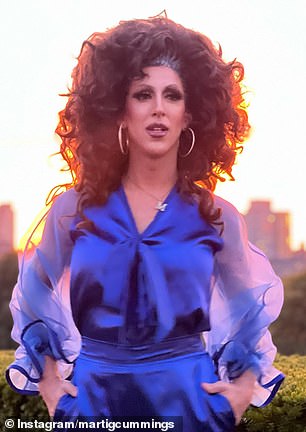 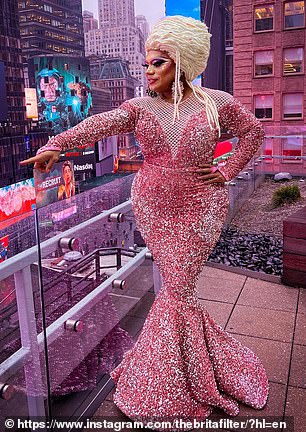 Invited to the White House for the ceremony are Marti Gould Cummings (left) and Brita Filter (right). The Biden administration is showing support for drag artists as they became political fodder by Florida Gov. Ron DeSantis this summer and have been targeted by right-wing groups

Both Cummings and Filter have performed for young audiences, with Cummings routinely putting on kids shows in progressives communities like Provincetown, Massachusetts.

Filter got some pushback for a performance she delivered at a ‘Pride Chapel’ in April, as she was asked to perform her drag show and then talk about queerness with a group of students from the progressive independent Episcopal school in the East Village.

Some conservative students said that they were uncomfortable with the dancing and twerking in a church setting, according to The New York Post.

DeSantis said he would be filing a complaint after a video showed a child in the audience of a Florida drag brunch, in which one of the queens was exposing naked, but clearly fake, large breasts.

The queen covers up her breasts as she spots a child seated front row, according to a video shared by the conservative Libs of TikTok account.

At a press conference in late July, DeSantis said ‘having kids involved in this is wrong. That is not consistent with our law and policy in the state of Florida’ and suggested that the restaurant in question, R House in Miami’s Wynwood neighborhood, could lose its liquor license.

A statement from the restaurant’s owners called it a ‘misunderstanding.’

The White House’s support also comes as drag queens and LGBTQ establishments have been targeted by hard-right groups such as the Proud Boys and the Patriot Front.

Last month in Colorado Springs, Colorado five people were killed when a gunman entered Club Q during a drag performance and started shooting. That followed the June 2016 shooting at Pulse nightclub, a LGBTQ nightclub in Orlando, in which 49 people were killed.

Previewing the bill signing from the podium Monday, press secretary Karine Jean-Pierre teased that there would be musical guests and entertainment at the South Lawn event, but wouldn’t give reporters more information than that.

The legislation came about after Supreme Court Justice Clarence Thomas, in a concurring opinion to Dobbs – which overturned Roe v. Wade in June – said that other cases based on the precedent that had been established in Roe should be revisited, including the 2015 landmark gay marriage decision Obergefell v. Hodges.

The Respect for Marriage Act officially repeals the Defense of Marriage Act, the Clinton-era legislation that banned federal recognition of same-sex marriage.

It requires the federal government to recognize same-sex and interracial marriages, codifying parts of Obergefell and the landmark 1967 case Loving v. Virginia.

The House of Representatives passed the bill in July, with the help of 47 Republicans.

The bill had more difficulty getting through the Senate, where 60 votes are needed for cloture, but eventually 12 Republicans signed on.

The bill passed the Senate last last month after amendments were added to bolster religious protections and clarify that it did not legalize polygamous marriages.

The House then passed the updated version on Thursday.