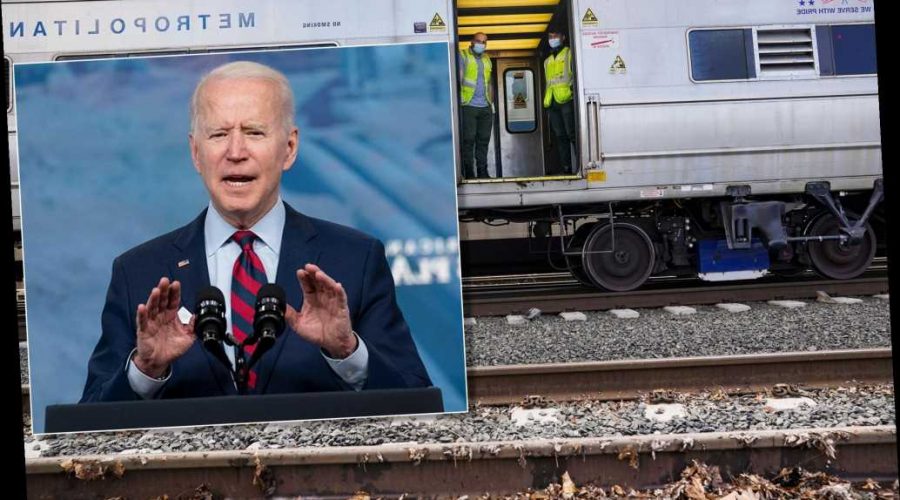 Warning to Biden: Tony Blair splurged wildly, too — and left the UK broke

President Biden on Wednesday sought to sell his $2.3 trillion infrastructure plan by pulling out some decades-old promises of futuristic technologies like a transcontinental bullet train that’s as fast as planes and supersonic jets that circle the globe in one hour.

A national high-speed rail network has failed to gain traction for decades and commercial supersonic transport ended in 2003 with the retirement of the Concorde fleet, which flew from Paris and London to New York in about 3 1/2 hours.

“What we’re really doing is raising the bar on what we can imagine. Imagine a world where you and your family can travel coast to coast without a single tank of gas on a high-speed train close to as fast as you can go across the country in a plane,” Biden said at the White House.

He added: “I tell the kids, the young people who work for me, tell my kids when I go on college campuses: they’re going to see more change in the next 10 years than we’ve seen in the last 50 years. We’re going to talk about commercial aircraft flying at subsonic speeds — supersonic speeds. To be able, figuratively, if you may, if we decide to do it, traverse the world in about an hour, travel 21,000 miles an hour. So much is changing and we have got to lead it.”

The globe’s circumference is 24,901 miles. Biden’s proposed rate of air travel would be more than 15 times faster than the Concorde’s cruising speed.

The idea of breakneck travel speed was not specifically spelled out in Biden’s infrastructure proposal, which came under fire in part for significant proposed spending in areas that aren’t traditionally viewed as infrastructure, including a proposed $400 billion for home and community-based health care.

A relatively small amount of money — $25 billion — is proposed for “transformative” projects that are “too large or complex for existing funding programs.”

Biden’s vision for trains as fast as planes would require dramatic technological process. The fastest train being introduced for public use — Japan’s L0 Series Maglev — will operate at a maximum speed of 310 miles per hour when it opens in 2027. By contrast, the top speed of the Boeing 747 passenger jet is about 570 mph.

The president’s vision for dramatically improving air travel speed also would require significant advances, given the Concorde’s much slower rate of travel compared to what he described.

In 1992, Bill Clinton vowed as a candidate to connect cities with high-speed rail and in he pitched a $1.3 billion plan to do so during his first year as president. But the then Democrat-held Congress didn’t pass the bill.

“Imagine your children growing up to work in innovation, good paying jobs and fields that haven’t even been invented yet,” Biden said Wednesday at the White House.

Biden’s massive spending proposal would be financed with tax hikes on higher incomes, investments and businesses, though Republicans and some Democrats say they disagree with the proposals.

If they can manage to retain party unity, Democrats are likely to ram the bill’s core provisions through the evenly divided Senate under budget reconciliation rules that avoid the usual 60 vote supermajority for legislation.

“I’m not trying to punish anybody. But dammit, maybe it’s because I come from a middle class neighborhood, I’m sick and tired of ordinary people being fleeced,” Biden said.

He also said he was willing to compromise on the specific details of tax hikes.

“Compromise is inevitable,” Biden said. “We’ll be open to good ideas in good faith negotiations. But here’s what we won’t be open to: We will not be open to doing nothing. Inaction, simply, is not an option.”

The president has taken heat from Republican lawmakers and business groups for proposing that corporate tax increases should finance an infrastructure package that goes far beyond the traditional focus on roads and bridges.

“What the president proposed this week is not an infrastructure bill,” Sen. Roger Wicker, R-Miss., said on NBC’s “Meet the Press,” one of many quotes that Republican congressional aides emailed to reporters before Biden’s speech. “It’s a huge tax increase, for one thing. And it’s a tax increase on small businesses, on job creators in the United States of America.”

Biden last week proposed funding his $2.3 trillion infrastructure plan largely through an increase in the corporate tax rate to 28% and an expanded global minimum tax set at 21%. But he said Wednesday he was willing to accept a rate below 28% so long as the projects are financed and taxes are not increased on people making less than $400,000.