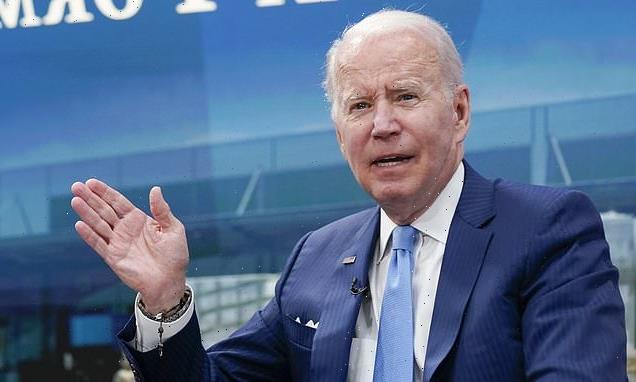 Biden will address the nation at 7.30pm TONIGHT after another shooting in Tulsa and to up his pleas to Congress as Kamala says ‘no more excuses’

President Biden is set to deliver a plea for gun control Thursday evening at 7:30 p.m. ET on the heels of another mass shooting in Tulsa, Okla, as Vice President Kamala Harris insisted there are ‘no more excuses’ not to act.

‘No more excuses. Thoughts and prayers are important, but not enough. We need Congress to act,’ the vice president said in remarks Thursday.

Biden has said there is little left for him to do from the executive branch and urged Congress to take up measures that would ban assault weapons and strengthen universal background checks.

On Wednesday a gunman opened fire at a Tulsa hospital, killing four people with an AR-15 he purchased three hours before the attack. The shooting came just over a week after a gunman mowed down 19 children and two teachers at Robb Elementary in Uvalde, Texas, using an AR-15 he’d purchased days earlier for his 18th birthday, which came just after a white gunman opened fire in a Buffalo grocery store, killing 10 black shoppers. 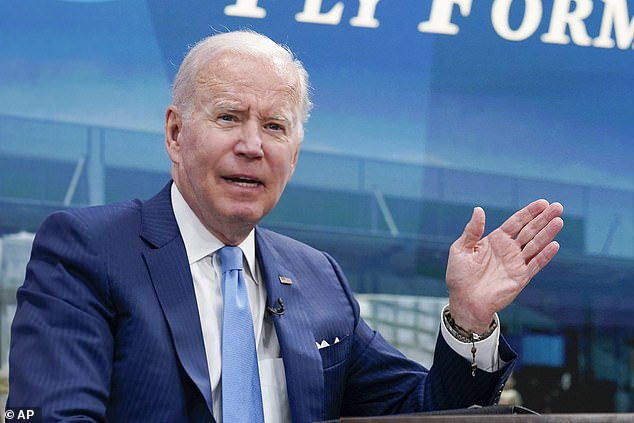 Biden is set to deliver a plea for gun control Thursday evening at 7:30 p.m. ET on the heels of another mass shooting in Tulsa, Okla 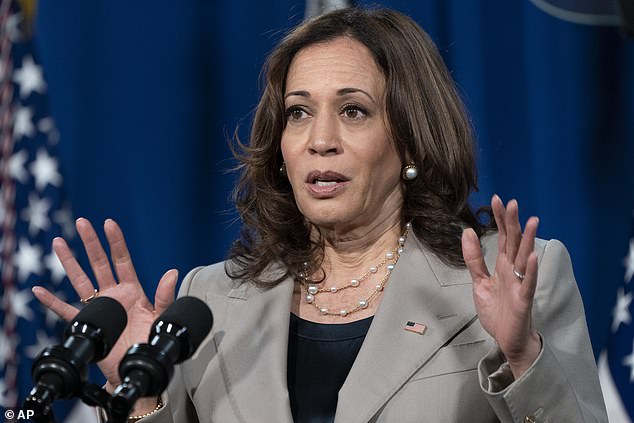 ‘No more excuses. Thoughts and prayers are important, but not enough. We need Congress to act,’ the vice president said Thursday

Bloodshed rocked the nation over Memorial Day Weekend –  150 died as a result of gun violence.

Earlier on Thursday the House Judiciary Committee held a markup session for the ‘Protecting Our Kids Act,’ which combines eight pieces of legislation in the latest Congressional gun control push.

The bill would raise the purchasing age of certain semiautomatic centerfire rifles from 18 to 21 – as the shooters in Buffalo and Uvalde were both 18. It also goes after high-capacity magazines, ghost guns and bump stocks and mandates certain requirements for firearms storage on residential facilities.

Speaker Nancy Pelosi also promised to have a hearing and markup of the assault weapons ban, which expired in 2004.

House Majority Leader Steny Hoyer has also set a vote for next week for red flag legislation offered by Rep. Lucy McBath, D-Ga., whose son was a victim of gun violence a decade ago.

Republicans remained firm in their resistance and the eight-piece measure is unlikely to make it through the Senate after the House passes it. But a bipartisan group of senators led by Chris Murphy, D-Conn., and John Cornyn, R-Texas, are working on a slimmed-down gun control measure that focuses on on state-based red flag programs, school safety and mental health programs. Nineteen states currently have red flag legislation, which allows law enforcement to take away firearms from those who are deemed by a cour to be a threat to themselves or others, on the books.

As the president visited Uvalde over Memorial Day Weekend, he expressed optimism that legislation could pass by claiming Republicans are ‘getting more rational.’

Biden specifically called Cornyn and Sen. Majority Leader Mitch McConnell ‘rational,’ though he said he didn’t know the status of the talks.

Asked if he had his own responsibility to act, Biden replied: ‘I can’t dictate this stuff.’ He implied the onus was on Congress to enact lasting change.

‘I can do the things I’ve done, and any executive action I can take, I’ll continue to take. But I can’t outlaw a weapon. I can’t change a background check. I can’t do that,’ the president said.

Republican Rep. Greg Steube of Florida argued that the law limiting high-capacity magazines would have unintended effects – and he held up his own guns to demonstrate, while participating in the hearing virtually.

Republican Rep. Ken Buck of Colorado argued that AR-15s, the gun style of choice in most recent U.S. mass shootings, had practical purposes.

The bill lawmakers are debating does not ban AR-15s. 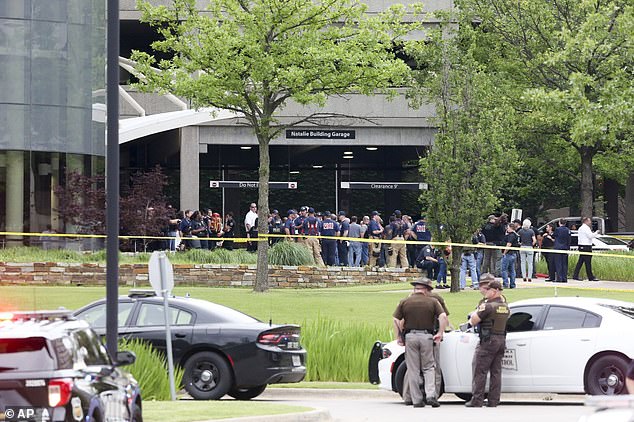 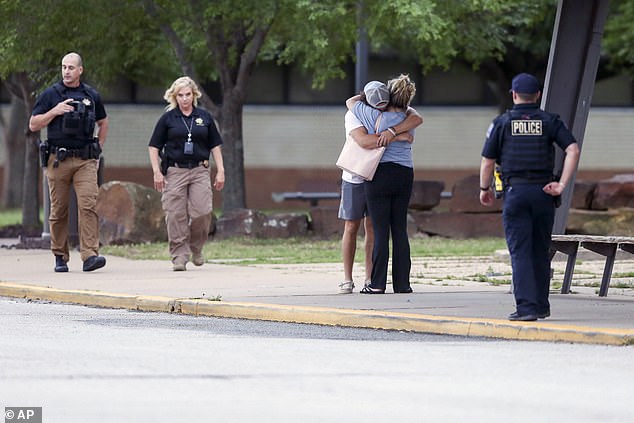 Two people hug outside at Memorial High School where people were evacuated from the scene of a shooting at the Natalie Medical Building Wednesday, June 1 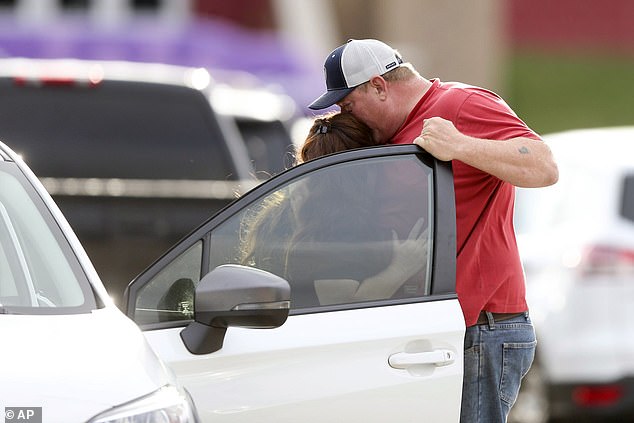 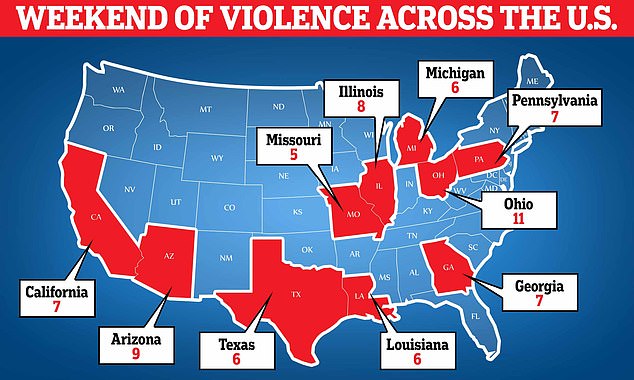 Pictured: A map showing the states that saw the highest number of gun violence deaths over the weekend, that saw more than 150 people killed in total across the United States

‘Hunter Biden illegally acquired a handgun despite being an admitted drug addict. A handgun that ended up being taken out of a public trash can 500 feet from a school. He also lied on his firearms application,’ McClintock said. ‘Nobody’s prosecuting him.’

McClintock was referring to Biden answering no on a 2018 firearms permit to the question, ‘Are you an unlawful user of, or addicted to, marijuana or any depressant, stimulant, narcotic drug, or any other controlled substance?’

Biden had already been discharged from the Navy Reserve over his cocaine use.

02/06/2022 World News Comments Off on Biden will address nation at 7.30 pm after another shooting in Tulsa
Lifestyle