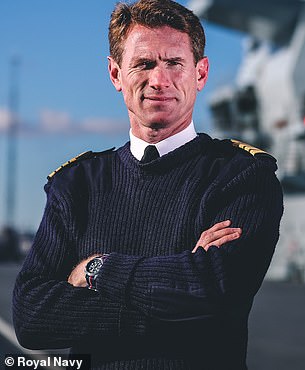 Captain Nick Cooke-Priest OBE was reportedly meant to be skippering the fleet’s flagship vessel back to its Portsmouth base from Rosyth, Scotland, today

A disgraced Royal Navy officer who is due to be stripped of the HMS Queen Elizabeth’s command has not embarked on what was supposed to be his final voyage.

Captain Nick Cooke-Priest was reportedly meant to be skippering the fleet’s flagship vessel back to its Portsmouth base from Rosyth, Scotland, today.

But the sailor, who is the subject of a probe for allegedly using the warship’s Ford Galaxy for personal use at weekends, has been told to remain on shore.

Although he will not be at the helm of the 65,000-ton aircraft carrier, he is still technically in command and will only relinquish this role on May 28.

A Royal Navy spokesperson said: ‘In light of the ongoing investigation, as a precautionary measure to protect both the individual and the Ship’s Company, the Royal Navy has decided that Captain Nick Cooke-Priest will not be at sea in HMS Queen Elizabeth.’

The ship’s passage back to Portsmouth from Rosyth, where it has spent the last six weeks in a dry dock for routine maintenance, was supposed to be the officer’s final stint in charge.

Captain Cooke-Priest is yet to be reassigned after the Royal Navy deemed his personal use of the car an ‘error of judgement’.

A navy spokesman said: ‘The 65,000-tonne future fleet flagship has spent the last six weeks back in the cavernous dock in Rosyth where she was first pieced together as engineers inspected her hull and conducted routine maintenance. 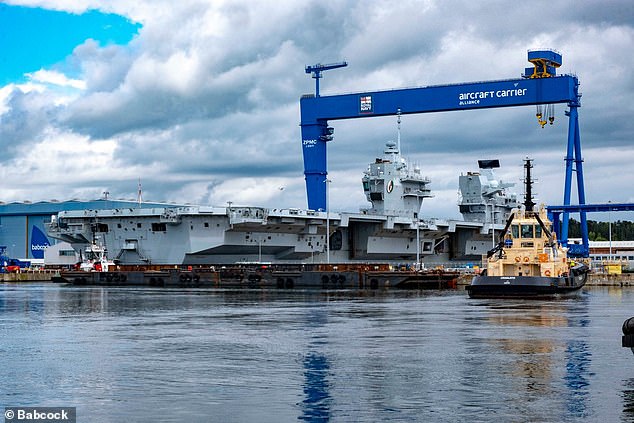 The ship’s passage back to Portsmouth from Rosyth, where it has spent the last six weeks in a dry dock (pictured) for routine maintenance, was supposed to be the officer’s final stint in charge

Commodore Cooke-Priest had specialised as a Lynx helicopter observer after joining the Royal Navy. A decade of flying appointments followed, primarily at sea, and included an instructional tour and as Flight Commander of HMS Exeter.

He was promoted to Commander in 2009 and that year in HMS Kent escorted the Queen during a royal tour.

On HMS Iron Duke, he was deployed to the Arabian Gulf and in 2011 to Libya as part of Operation Ellamy.

Assuming command of HMS Bulwark, the Fleet Flag Ship, in January 2015 and leading the UK’s contribution to the Gallipoli centenary commemorations in the same year are other highlights of his successful career.

He is a married father of three sons and was awarded an OBE in 2016. In his spare time he enjoys skiing, sailing and shooting.

‘During her time out of the water, 284 hull valves were changed, both rudder blades were removed and cleaned, her sea inlet pipes were inspected, all sacrificial anodes were replaced, and a renewed coat of anti-foul paint was applied to the ship’s bottom.

‘The huge port and starboard anchors and cables were also laid out along the length of dock to allow them to be inspected.

‘The docking period was a mandatory requirement and its successful completion means HMS Queen Elizabeth should not need to dock down again for another six years.’

Commander Mark Hamilton, head of marine engineering onboard, said: ‘It’s the first time that such a short docking period has taken place with a Royal Navy ship of this size.

‘It’s real testament to the great working relationship forged between the MoD and industry to make this such a success.

‘We’ll now carry the concept forwards to future docking periods, as well as to those of our sister ship HMS Prince of Wales.’

After sailing into the Firth of Forth, the carrier will conduct a period sea trials and training before a planned deployment to the east coast of the United States later in the year. 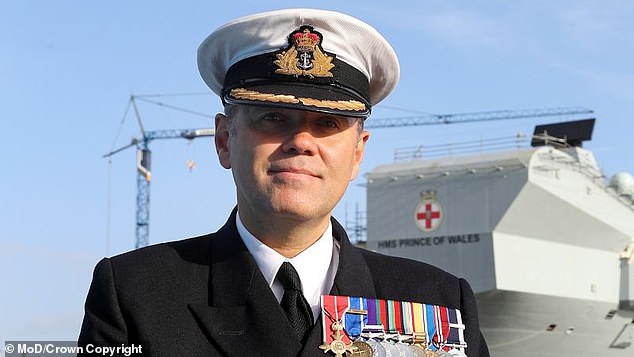 Captain Stephen Moorhouse OBE (pictured above) will take over the command of HMS Queen Elizabeth, which is worth £3billion 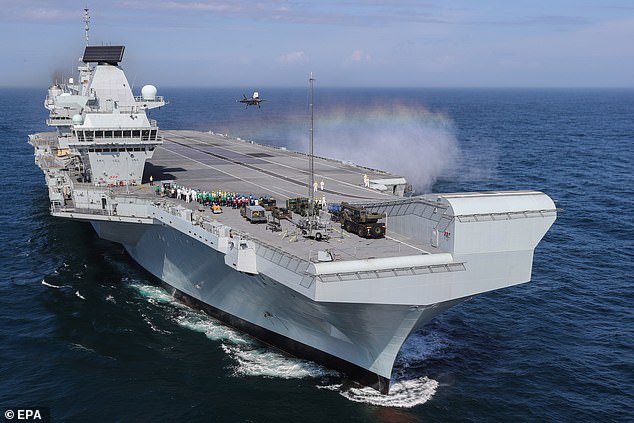 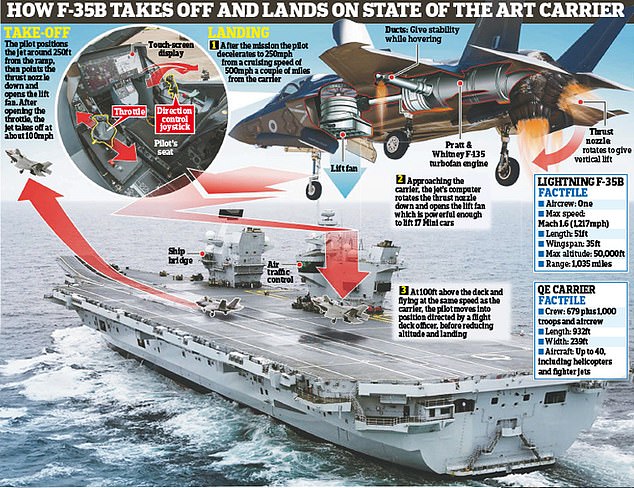