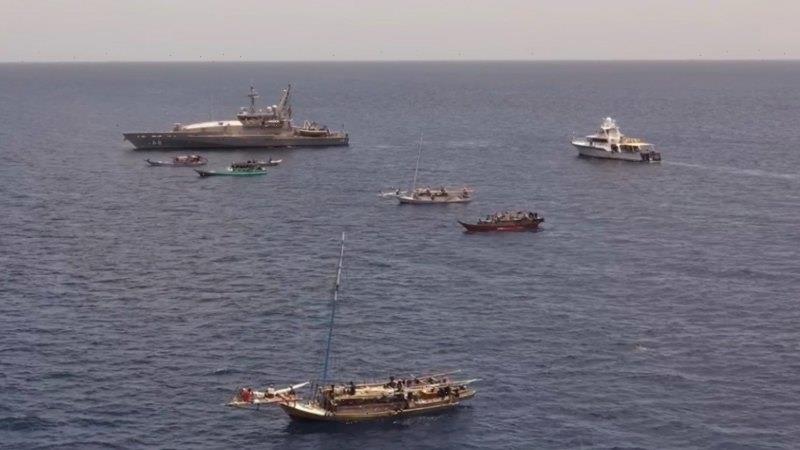 Illegal fishing activity off the north-west coast of Australia has skyrocketed to unprecedented levels, as a joint federal operation seized 16 vessels and burnt three at sea during a three-day blitz last month.

National figures have revealed the scope of the increase in illegal vessels since the COVID-19 pandemic began, with more boats intercepted over three months this year than an entire seven-year span preceding the pandemic.

Just five boats were intercepted in 2018-19 and only four the next year, but that figure surged to 85 vessels in 2020-21 and a whopping 103 from July to September this year, as the pandemic continued.

Late last month the cross-agency operation that included the Navy and Australian Fisheries vessels intercepted 16 boats during a three-day blitz at the Rowley Shoals Marine Park off the northern coast of Western Australia, burning three of them at sea, after a raft of complaints from operators.

“All they need is the fin for the Chinese market … they don’t need the rest, so they cut the fins off and dump the body.”

The Federal government has been reluctant to detain illegal fishing crews in the current COVID-19 climate, seizing fishing equipment and escorting boats out of Australian waters instead.

In the past 18 months, the operation had destroyed 27 illegal fishing vessels, but only in circumstances where the crew could be safely moved to another departing boat.

Their presence and aggressive tactics left local charter tour companies in WA’s North West fearful for their safety and livid at what they said was a lack of authoritative response.

Local boat skippers said it was the first time they had seen Indonesian crews at Rowley Shoals.

One tourist operator reported illegal finning in the area, with sharks spotted still alive, lying on the water’s surface, while another charter boat skipper saw Indonesian-marked plastic rubbish for the first time within the sanctioned marine park.

“All they need is the fin for the Chinese market … they don’t need the rest, so they cut the fins off and dump the body,” one experienced charter operator said. 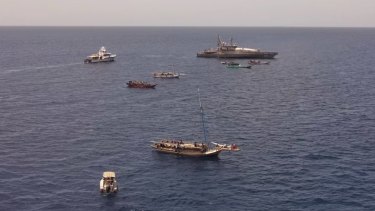 The ABF denied the pandemic had reduced surveillance and response efforts at sea, as new daily Indonesia COVID-19 case numbers remained in their thousands.

“COVID-19 has not reduced the surveillance and response efforts of the Maritime Border Command,” an ABF spokesperson said.

“Vessels continue to be seized and destroyed.”

Australian Border Force was asked on Friday if the federal government had stopped detaining and prosecuting illegal fishing crews due to the risk of spreading COVID variants.

The agency refused to confirm if the federal government had stopped detaining crews due to COVID but a statement last month from the Australian Fisheries Management Authority said: “In order to minimise the transmission of COVID-19 into the Australian community, the on-water response has necessarily been adjusted to protect our officers and the broader Australian community.”

Charter operators told WAtoday on Thursday illegal activity had slowed predominantly in the past week while MBC vessels remained present in the area.