Budapest: A boat capsized and sank in the Danube River Wednesday evening in Budapest, with 34 people on board, including passengers and crew, Hungarian media reported. 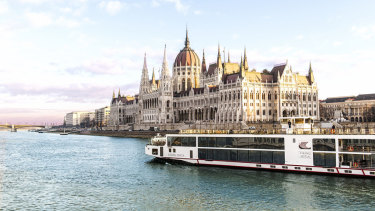 A ship near Hungarian Parliament Building along the Danube River in Budapest.

Rescuers were at the scene near Hungary's parliament, including a fire boat.

Some people have been rescued and a search is underway for others.

The owner of the 'Hableany' (Mermaid) told news website Index.hu that the vessel had sunk.

Other boats docked on the river banks, including large tourist boats, were shining their lights onto the river, likely in search of survivors.

The search and rescue efforts were being carried out under heavy rainfall.

Index.hu reported that one person was rescued near the Petofi Bridge, which is about three kilometres south of parliament.

'Hableany' is described on the company's website as "one of the smallest members of the fleet … an excellent venue for cruises and smaller family events."

It has two decks and capacity for 60 people, or 45 for sightseeing cruises.