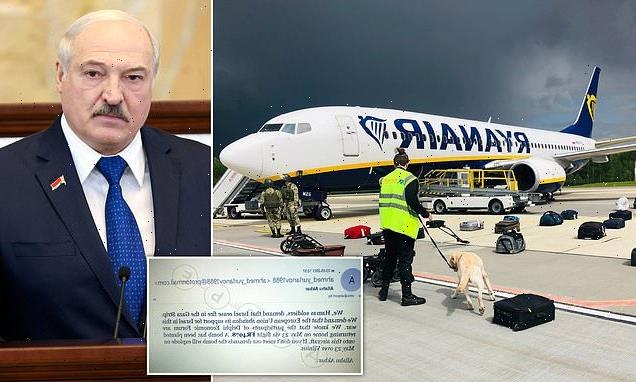 An email containing a ‘bomb threat’ that forced a Ryanair flight to land in Belarus has been revealed to have been sent almost half an hour after the plane was grounded.

Belarusian officials have said Flight FR4978 from Athens to Vilnius had to be diverted on Sunday due to the threat, which they claimed came from the Palestinian militant group Hamas.

When the flight landed in Minsk, a Belarusian journalist and critic of President Alexander Lukashenko was arrested.

Roman Protasevich’s arrest, along with that of his girlfriend, has led several Western countries to consider sanctions on Belarus, which faced a wave of protests against Lukashenko’s rule last year.

The email, a screenshot of which was shared by an investigative media outlet on Thursday, appears to debunk the official justification for diverting the plane.

In a speech on Wednesday, Lukashenko said the threat originated from Switzerland. Swiss authorities said they had no knowledge of any such threat. 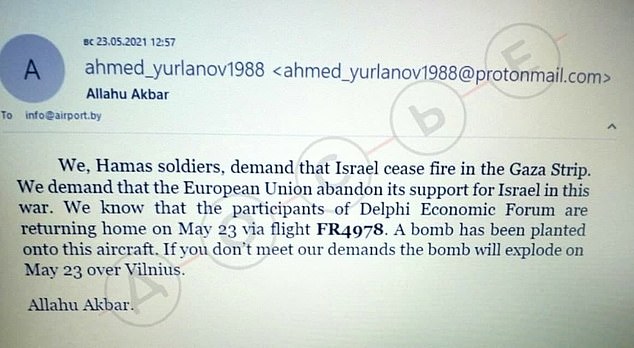 Dossier, an investigative unit funded by an exiled Russian tycoon, released a screenshot of an email that appeared to have been sent at 12:57am – 27 minutes after Minsk air traffic control informed the Ryanair plane of the bomb threat 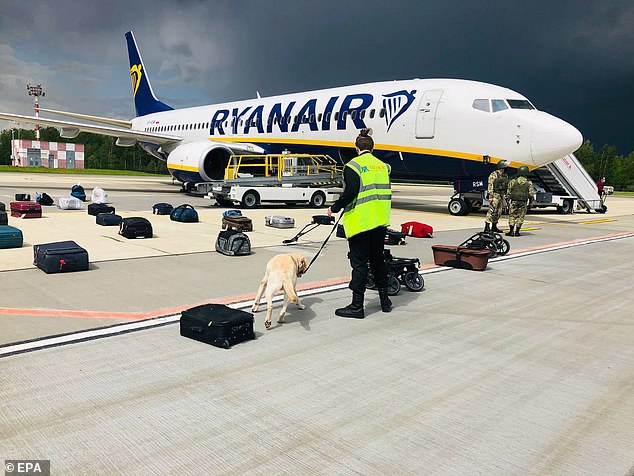 Belarusian officials have said Flight FR4978 from Athens to Vilnius had to be diverted on Sunday due to the threat, which they claimed came from the Palestinian militant group Hamas 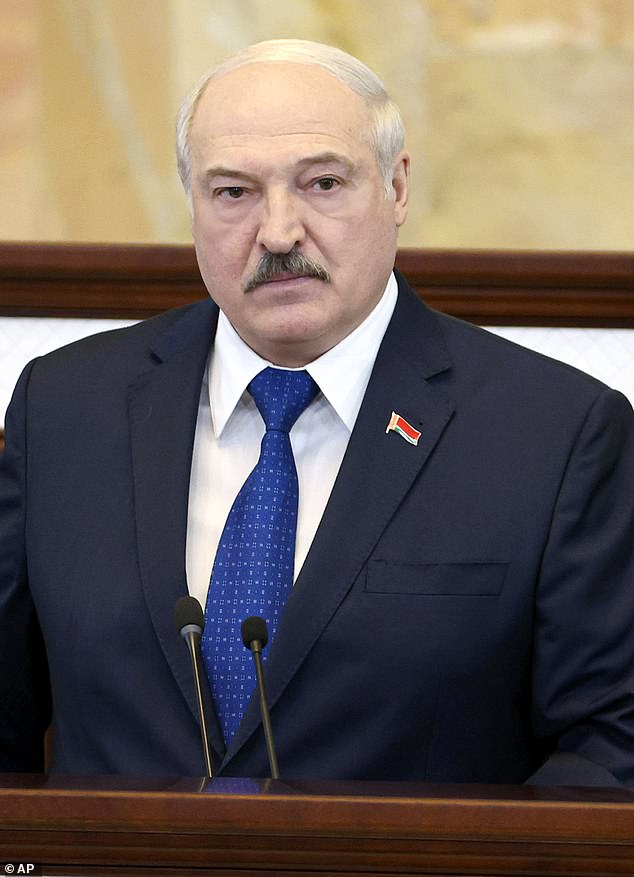 European leaders have accused Belarus of hijacking the plane in order to arrest Roman Protasevich, a journalist and prominent critic of President Alexander Lukashenko (pictured)

Dossier, an investigative unit funded by an exiled Russian tycoon, released a screenshot of an email that appeared to have been sent at 12:57am – 27 minutes after Minsk air traffic control informed the Ryanair plane of the bomb threat.

The text of the email appears to match exactly that of one Belarusian officials read out at a news conference earlier this week.

Hamas, which until Friday had been engaged in an 11-day conflict with Israel, has denied any involvement with the Belarusian incident.

The email is just the latest revelation to cast doubt on Belarusian authorities’ justifications for forcing the plane to land.

Lukashenko, who has ruled Belarus for 26 years, claimed that the Ryanair flight had first requested to land at the Warsaw Chopin airport, but was refused.

This was denied by Warsaw airport officials on Thursday.

European leaders have accused Belarus of hijacking the plane in order to arrest Protasevich, and several have closed their airspace to Belarusian flights.

The latest plans for sanctions could target Belarus’ lucrative potassium industry among others.

Lukashenko, whose country is often dubbed ‘Europe’s last dictatorship’ has accused the West of trying to ‘strangle’ Belarus with sanctions.

The EU has previously slapped Belarusian authorities with sanctions over the August 2020 election that handed Lukashenko a sixth term and that opposition groups have rejected as rigged, as well as his ensuing crackdown on protests. 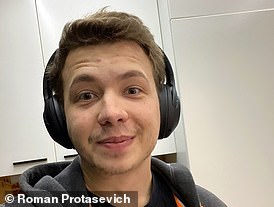 NEXTA, Protasevich’s outlet, was closely involved in reporting a wave of opposition protests that last year threatened to topple Lukashenko, before he was given backing by Vladimir Putin

Protasevich, 26, has long been a thorn in the side of Belarus’s hardline dictator Alexander Lukashenko.

He worked as an editor at the Poland-based Nexta Live channel, which is based on the Telegram messenger app and has over 1 million subscribers.

The channel, which is openly hostile to Lukashenko, played an important role in broadcasting huge opposition protests against the President last year.

Nexta also helped coordinate those same protests, which were sparked by anger over what the opposition said was a rigged presidential election.

The channel’s footage, which showed how harshly police cracked down on demonstrators, was used widely by international media at a time when the Belarusian authorities were reluctant to allow foreign media in.

In November Protasevich published a copy of an official Belarusian list of terrorists on which his name figured.

The listing said he was accused of organising mass riots while working at Nexta. He also stands accused of disrupting social order and of inciting social hatred. He regards the allegations, which could see him jailed for years, as unjustified political repression.

Protasevich fled Belarus for Poland in 2019 due to pressure from the authorities, according to Media Solidarity, a group that supports Belarusian journalists.

He moved his parents to Poland too after they were put under surveillance. He later relocated to Vilnius, the capital of Lithuania, where opposition leader Sviatlana Tsikhanouskaya is also based.

Protasevich is currently editor-in-chief of a Belarusian political outlet hosted on the Telegram messaging app called ‘Belarus of the Brain’ which has around a quarter of a million subscribers.

He was flying back to Vilnius from Greece where he had spent time taking photographs of a visit there by Tsikhanouskaya. He had posted the pictures to social media before flying back.

If the next batch of sanctions does not ease the crackdown on the opposition and democratic values, German Foreign minister Heiko Maas said the EU ‘will continue to look at what effects this has in Belarus, whether Lukashenko relents. If that isn’t the case we have to assume that this will be just the beginning of a big and long spiral of sanctions.’

The EU has tried on and off to encourage democratic reforms in Belarus, bring it closer to the bloc – and distance it from its main backer, Russia – but has not had much success.

Some say more sanctions will do little to alleviate the situation and will only push Belarus even closer to Russia, and reduce the influence of the EU and others.

Austrian Foreign Minister Alexander Schallenberg acknowledged that it is a difficult balance.

‘What we don’t want to do is to drive the country in the arms of Russia,’ he said.

Luxembourg’s Jean Asselborn said the bloc was focused on the country’s large potassium industry. The mineral is mainly used in the fertilising industry.

‘The key word, I think, is potassium,’ he said. ‘Belarus produces a great deal of potassium, is one of the world’s biggest suppliers.

‘And I think it would hurt Lukashenko a great deal if we accomplished something there.’

The giant Belaruskali plant is controlled by the state as are most economic assets in the country of 9.3 million.

It is the main cash earner for Lukashenko’s government along with petrochemicals.

The EU foreign ministers will prepare proposals for the sanctions but will not make final decisions on Thursday.

Lukashenko has called the hijacking accusations an ‘absolute lie’.

He has insisted that Belarusian had a legitimate right to arrest Protasevich, who has become a top foe, saying that the 26-year-old journalist was working to foment a ‘bloody rebellion.’

Protasevich, who left Belarus in 2019, ran a popular messaging app that had a key role in helping organise huge protests in recent months that have put Lukashenko under unprecedented pressure at home in the wake of the August vote.

But the strongman has only increased his crackdown, and more than 35,000 people have been arrested since the protests began, with thousands beaten.

On Thursday, Protasevich’s parents renewed their appeal for assistance in freeing their son.

‘I want to appeal to you as Roman’s mother. I want you to hear my cry, the cry of my soul, so that you can understand how difficult it is for us right now and how we have found ourselves in an absurd situation,’ Natalia Protasevich told reporters in Warsaw.

‘I want you to relay our appeal everywhere, throughout the world, to government representatives, to EU countries, to EU leaders, to US leaders: I am appealing, I am begging, help me free my son.’

Roman’s father Dmitry said his son was a ‘hero’.

‘All through his life, he has fought for truth and he has relayed it to people. That’s why Lukashenko has committed this terrible act,’ he said.

Ireland’s transport minister said it will call on the United Nations International Civil Aviation Organization to conduct an impartial probe into the ‘forced landing’ the plane.

It came after Europe’s aviation regulator said on Wednesday that Belarus’s actions had also cast doubt on its ability to provide safe air navigation, and some international officials are pushing for an investigation close to the type seen when a plane crashes or something goes technically wrong.

‘What we’ll be looking for is an investigation under Article 55e of the Convention of the Council (ICAO) and my understanding is that this would be the first such investigation,’ Eamon Ryan said, speaking after a meeting of ministers at the OCED’s International Transport Forum, which agreed to condemn the ‘coercive, forced landing.’

Article 55e gives the council the power to ‘investigate, at the request of any contracting state, any situation which may appear to present avoidable obstacles to the development of international air navigation.’

Ryan said he would expect such an investigation to be turned around by approximately the end of June.

‘We need a full probe, a thorough investigation,’ he said. Ryan is to attend an urgent meeting of ICAO’s 36-member council, later on Thursday at a meeting that will also include government ministers from Poland, Lithuania and Belarus. Ryan will attend the meeting because Ryanair is registered in Ireland. 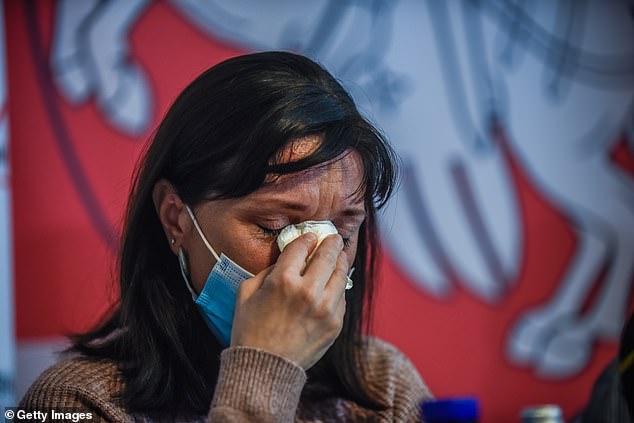 On Thursday, Protasevich’s parents renewed their appeal for assistance in freeing their son. Pictured: Natalia Protasevich, the journalist’s mother at a press conference in Warsaw 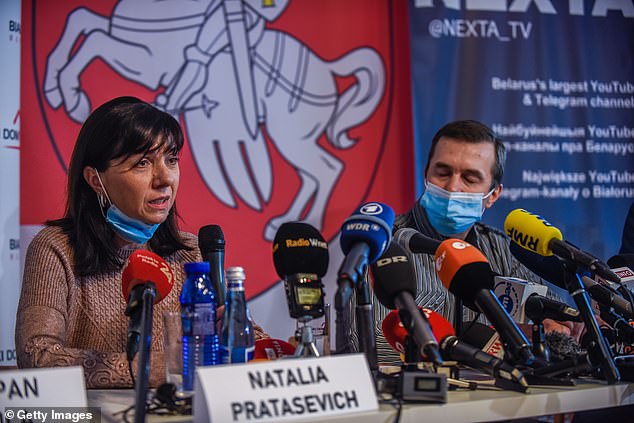 ‘All through his life, he has fought for truth and he has relayed it to people. That’s why Lukashenko has committed this terrible act,’ Protasevich’s father Dmitry (left) told reporters