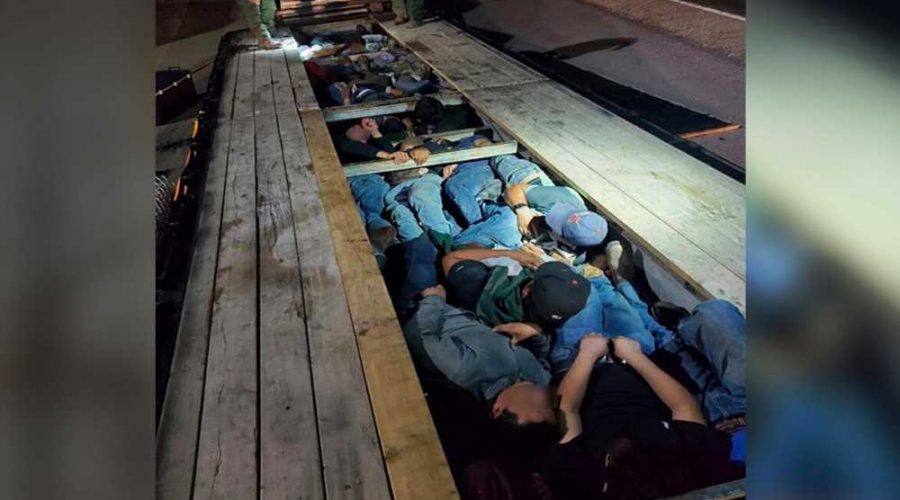 UN food chief on border, pandemic: ‘When you don’t have food, you pack up and go find it somewhere’

​Border Patrol agents stopped a trailer at a border checkpoint in Texas and discovered 18 adults crammed in a space under the boards and two children stuffed into a side panel.

Chief Patrol Agent Austin Skero of the Del Rio Sector tweeted photos of the illegal immigrants packed in the trailer so tight they were nearly lying atop one another with barely room to move.

Most of them held their arms down along their body to make more room in the space that appeared to be no more than 18 inches deep.

Tarps and bags were on the bed of the trailer to conceal the immigrants hiding underneath.

Another photo showed the children – ages 10 and 15 – jammed into a container barely big enough to hold them.

Skero said canines on Monday alerted officers to the trailer and an inspection uncovered the adults “trapped under the trailer boards.”

“With temperatures on the rise, smuggling attempts like these have a high potential to turn deadly,” he said.

It wasn’t clear where the migrants were traveling from.

The Biden administration is scrambling to respond to a surge of hundreds of thousands of illegal immigrants from Mexico, Central America, and elsewhere crossing into the US.

The federal government is housing thousands of unaccompanied minors in temporary shelters, along with permanent border detention facilities, and has used some military bases and convention centers to accommodate many more.

According to numbers compiled by US Customs and Border Protection, federal agents encountered 18,890 unaccompanied children from Central America in March — double February’s 9,297.

Vice President Kamala Harris, who the president tapped last month to lead the efforts to stem the tide, ​is expected to travel to Guatemala and​ Mexico, but no date has been finalized.