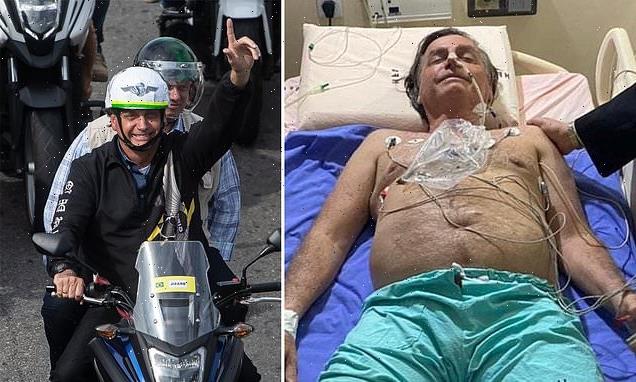 Brazil President Jair Bolsonaro spends a THIRD day in the hospital but staff says he’s recovering after doctors removed a gastric catheter: They’re monitoring an intestinal blockage tied to the stabbing he suffered in 2018

Brazilian President Jair Bolsonaro remains in the hospital Friday after doctors yesterday said they had removed a gastric catheter, but didn’t say when he will be discharged.

The 66-year-old is hospitalized at Vila Nova Star Hospital in São Paulo, where he is being treated for an intestinal blockage linked to the abdominal stabbing he suffered while campaigning in September 2018.

He had complained of having hiccups for 10 straight days and was taken to the Armed Forces Hospital in the capital of Brasilia on Wednesday before he was transferred to Vila Nova Star Hospital the same day.

‘The President of the Republic, Jair Messias Bolsonaro, remains hospitalized at Hospital Vila Nova Star, in São Paulo, maintaining a satisfactory clinical evolution. Thus, the nasogastric tube was removed and feeding is planned for (Friday) without prediction of hospital discharge,’ doctors said in a statement released Thursday night. 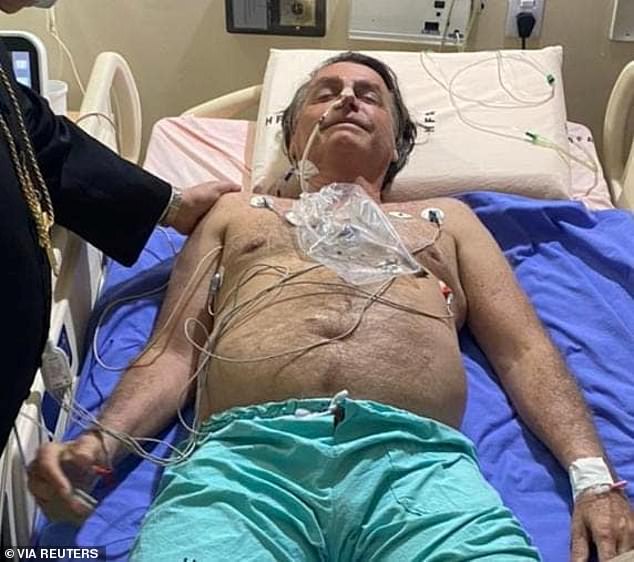 Brazilian President Jair Bolsonaro had a gastric catheter removed at Vila Nova Star Hospital in São Paulo on Thursday. Doctors said in a statement that the 66-year-old is recovering, but did not say when he will be discharged. The far-right leader told Rede TV that he expected to be sent home Friday 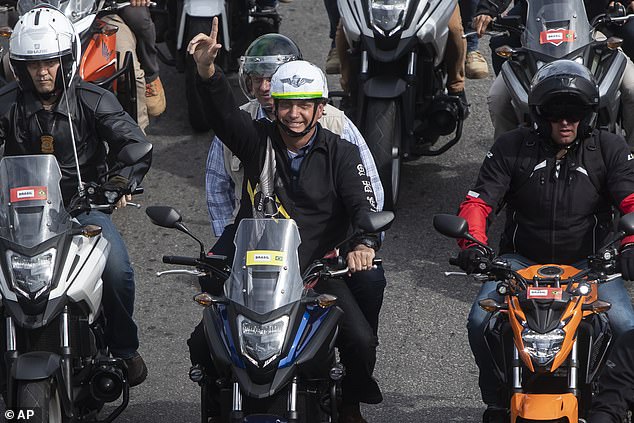 Brazil’s President Jair Bolsonaro remained hospitalized Friday as doctors continue to treat him for an intestinal blockage related to the 2018 stabbing he suffered while on the campaign trail. He is pictured above leading thousands of bikers through Rio de Janeiro on May 23 as part of a protest against COVID-19 restrictions

Bolsonaro gave Rede TV an interview from his hospital bed Thursday, telling the network that there was a possibility that he would no need surgery and that he was expecting to be sent home Friday.

‘I arrived here yesterday with a very strong indication for surgery, considering an intestinal obstruction was found,’ he said. ‘This obstruction is always a very high risk,

In his first spoken comments since going into hospital on Wednesday morning in the capital Brasilia, after days of chronic hiccups, Bolsonaro also told Rede TV that he would probably not need to go undergo surgery.

‘I arrived here yesterday with a very strong chance of surgery, but surgery is now far less likely,’ he said. ‘So the chance for surgery is really far away.’

Dr. Antônio Luiz Macedo stood by Bolsonaro’s side during the interview and told the network that ‘surgery, in principle, is ruled out once the intestine has started to function and the abdomen is more flaccid.’

Bolsonaro lamented that he would not be making an official visit to Manaus on Friday, where he also expected to participate in a motorcycle rally to protest COVID-19 restrictions. 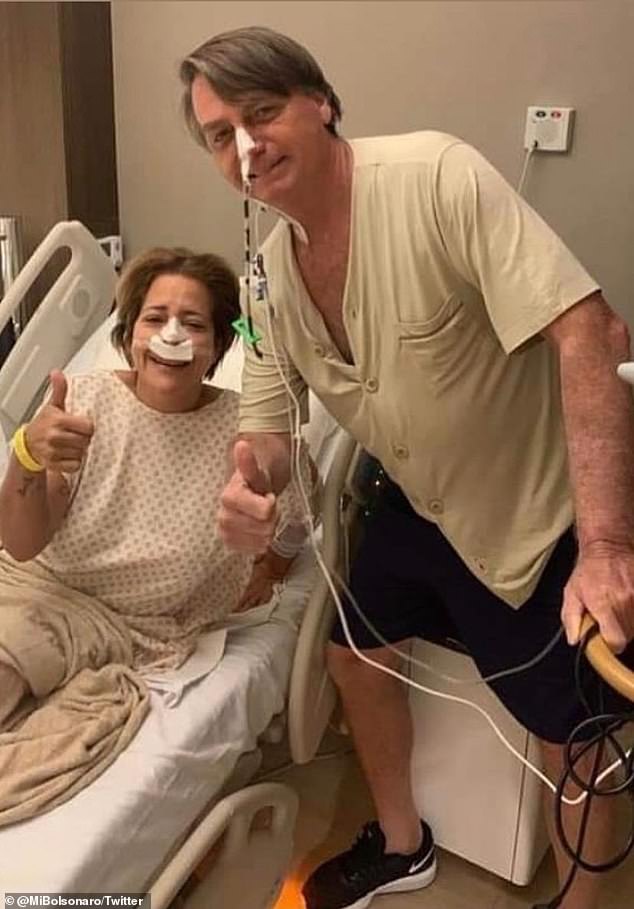 On Thursday, Brazilian First Lady Michelle Bolsonaro posted a photo of President Jair Bolsonaro posing with a patient (left) at Vila Nova Star Hospital in São Paulo. Bolsonaro has been hospitalized at the medical facility since Wednesday and is being treated for an intestinal blockage linked to the abdominal stabbing he suffered while campaigning in September 2018

O Globo newspaper columnist Lauro Jardim wrote on Friday that Bolsonaro had passed the night well and would now begin a liquid diet.

Bolsonaro has faced several health issues during his presidency, mainly stemming from long-term complications after he suffered a perforated intestine when he was stabbed on the campaign trail in 2018.

The president, who once compared COVID-19 to a ‘little flu’ was infected with the deadly virus last year.

Bolsonaro is in a weak political moment as the Senate probes a corruption scandal over the purchase of coronavirus vaccines and he faces criticism over his handling of the pandemic.

As of Friday, the ravaging coronavirus had killed 538,942 people in Brazil – the world’s second highest death toll behind the United States.