London: The British government will spend £200 million ($375 million) to replace combustible cladding on the outside of high-rise buildings after some private developers refused to pay to make them safe in response to fire that killed 71 people.

Grenfell Tower, a 24-storey London social housing block, was engulfed in flames two years ago. Officials have said aluminium cladding with a plastic core contributed to the rapid spread of the blaze. 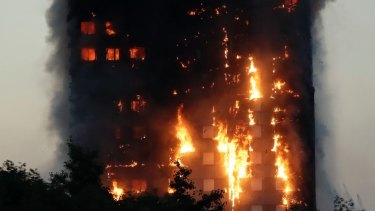 Smoke and flames rise from the Grenfell Tower building in London in 2017.Credit:AP

After spending months trying to persuade property companies to pay to remove the cladding with only limited success, the government has decided to step in with public funds to fix the cladding on about 170 high rise buildings.

Prime Minister Theresa May said although a number of private companies had acted, too many developers were continuing to pass on the cost of the work to people living in the buildings.

"It is of paramount importance that everybody is able to feel and be safe in their homes," May said. "We will now be fully funding the replacement of cladding on high-rise private residential buildings so residents can feel confident they are secure in their homes."