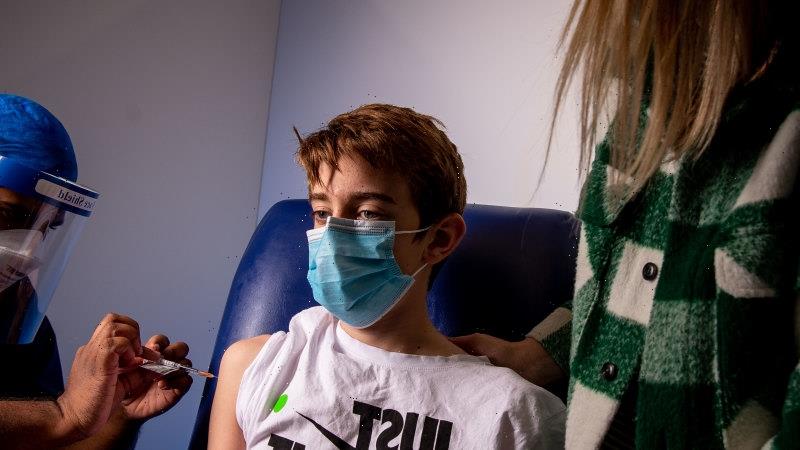 London: Britain’s chief medical officers have said that vaccinating young teenagers against COVID-19 is justified when their mental health and education are taken into account.

Minors aged between 12 and 15 will be offered just a single dose of Pfizer or Moderna, with more research ordered into whether a second dose should be given, as is currently administered to those aged 16 and above. 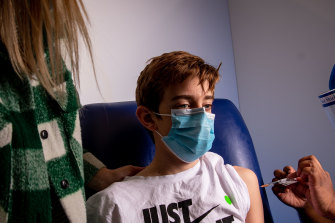 12-year-old Lucas having his first vaccination at the Heidelberg Repatriation Hospital, Melbourne. Britain’s decision brings the UK into line with countries like Australia which will offer the Pfizer vaccine to the over 12s from Monday.Credit:Eddie Jim

The decision by the CMOs brings the UK partly into line with countries like Australia, the United States, Israel and many European nations including France, which are already offering the jab to minors.

It comes just ten days after the Joint Committee on Vaccination and Immunisation (JCVI) said that the benefits to children, purely from a disease perspective, were not great enough to justify giving them the jab, with children highly unlikely to develop serious disease from the virus.

The committee left the door open for teens aged 15 and below to be vaccinated, urging medical officers to consider the wider impacts of vaccination, including schoolchildren’s mental health and education. 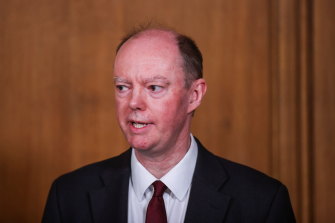 On Monday, Chief Medical Officer Chris Whitty told a news conference that he and his colleagues in Scotland, Northern Ireland and Wales had decided that vaccinating minors would help reduce the disruption to their education.

“The disruption in education which has happened since March 2020 has been extraordinarily difficult for children and had a big impact on health, mental health and long-term public health and this is most apparent in areas of deprivation,” he told reporters at Downing Street.

But Whitty said that offering a single vaccine to the over-12s would reduce but not eliminate the disruption.

“It reduces the chance a child will get COVID if they have [the vaccine] probably by about 50 – 55 per cent.

“We definitely do not think this alone is going to be the thing that deals with educational issues,” he said.

Professor Lim Wei Shen from the JCIV said the decision did not conflict with their own advice which was limited to assessing only the health risks.

“This review is good news for everybody because the wider impacts of vaccinations have been examined,” Professor Lim said.

Regulator MHRA has approved Pfizer and Moderna vaccines for use in the over 12s despite reports of the rare side effects of heart inflammation.

“These both happen very rarely in the general population,” Dr June Raine from the MHRA said.

“These are mild cases, individuals usually recover within a short period of time with standard treatment and our advice remains that the benefits outweigh the risks of getting vaccinated and this includes those aged 12 to 15,” Dr Raine said.

The Royal College of Paediatrics and Child Health advised the CMOs on their decision and overwhelmingly endorsed their advice.

“Participation in activities inside and outside of school are key to children’s development, resilience, and mental health and wellbeing,” the College said in a statement.

“We need to ensure that such participation returns to normal as a matter of urgency.”

Fiona Sugden from Queensland lives in London with her five children, the eldest of whom, Finn, aged 12 is currently isolating at home and off school having caught COVID-19 in the past week.

“Will I get Finn vaccinated? Yes, I will without hesitation,” she told The Sydney Morning Herald and The Age.

Britain’s vaccination rollout was extended to 16 and 17-year-olds in August and more than 81 per cent of the population aged 16 and above have received both jabs.

England has been living without any restrictions and without masks except on the Underground since late July.

Data compiled by Public Health England says between 40 to 70 per cent of young people have already been infected with COVID-19.