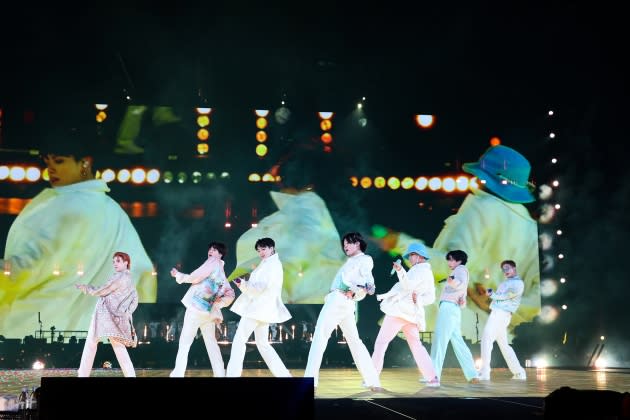 The streaming service is kicking off their annual Disney+ Day by unveiling the BTS concert film, which showcases the boy band’s string of shows at SoFi Stadium in late 2021, where the group took over for a four-night run. The concert film, produced by HYBE and directed by Sam Wrench and Junsoo Park, is said to be “stage-focused” and includes performances of the group’s biggest hits like “Dynamite,” “Butter” and “Permission to Dance.”

Tickets for BTS’ mini-residency at SoFi Stadium sold out immediately for all four nights and notched a historic boxscore total that, according to the Billboard Boxscore, was the largest gross for a run of shows at a single venue since 2012.

The explosive concert experience welcomed 70,000 fans each night, and made excellent use of the stadium’s massive video screens and high-tech pyrotechnics. In her recap of BTS’ opening L.A. show, Variety‘s Angelique Jackson wrote that the experience was “rife with confetti, smoke, pyrotechnics and — of course — the smoothest of dance moves.”