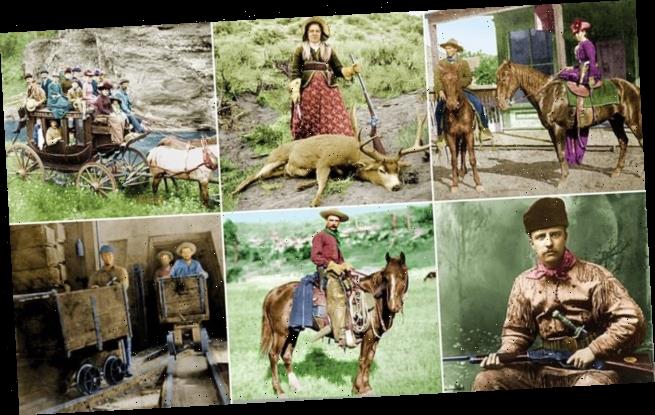 The Old West in color: Buffalo Bill, Teddy Roosevelt and the gold rush are brought to life in fascinating restored photographs

The spirit of the Wild West has been brought back to life through a series of historical photographs which have been colourised for the first time in a new book.

The Wild West in Color: A photographic Account of our Nation’s Westward Expansion has been produced by John C. Guntzelman and published by Crestline Books.

The new book features more than 200 historical pictures which have been colourised for the very first time – bringing the history of the Wild West into the present day.

Among the striking images is a photograph of the female outlaw Myra Maybelle Shirley Reed Starr, better known as Belle Starr, in 1886 on her horse after having been arrested for her suspected involvement in a robbery.

Starr was known to associate with the James-Younger Gang and was fatally shot in 1889 in a case that is still unsolved.

Another picture showed gutsy frontierswoman Augusta ‘Gusty’ Higgins Farnham standing with a shotgun next to a deer she shot dead.

While the book also features a shot of the Native Americans from Buffalo Bill’s Wild West show standing in formation. 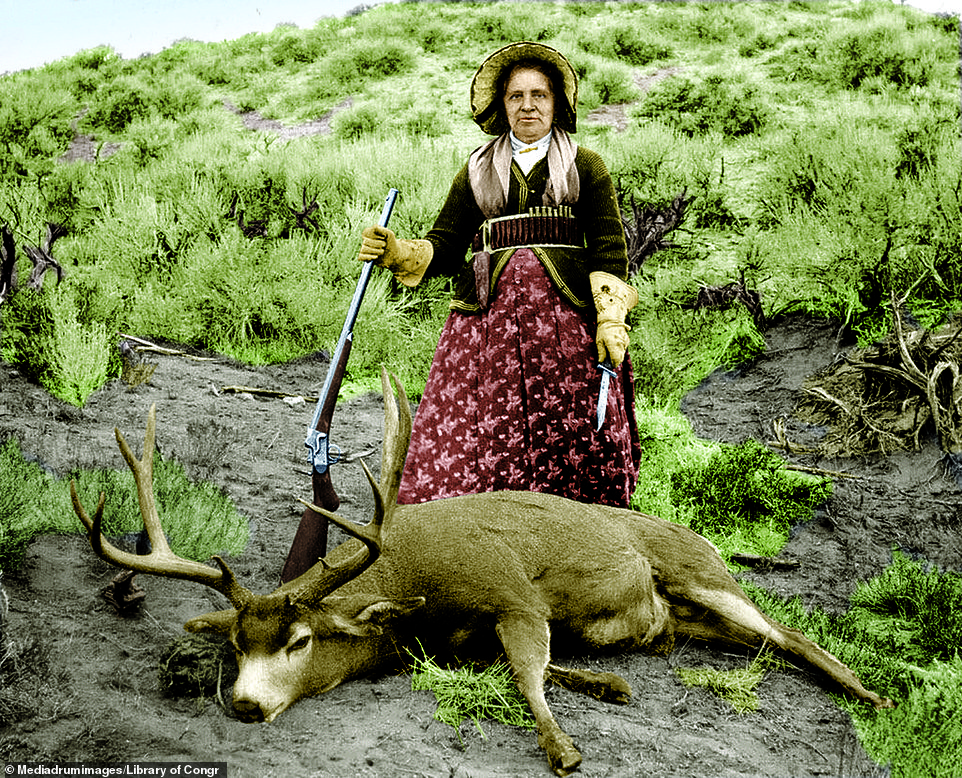 Augusta ‘Gusty’ Higgins Farnham was one of the earliest female hunters in the western territories. This image of her, included in the new book was taken in Denver, Colorado, in 1898 and shows her standing above the corpse of a deer that she has killed. In her right hand she shows off the gun she used to kill the deer and in her other hand she is holding a knife. Colorado sits where the Great Plains meet the Rocky Mountains, which gives the state a diverse amount of areas for wildlife to roam, and made it the perfect place to hunt for sources of food 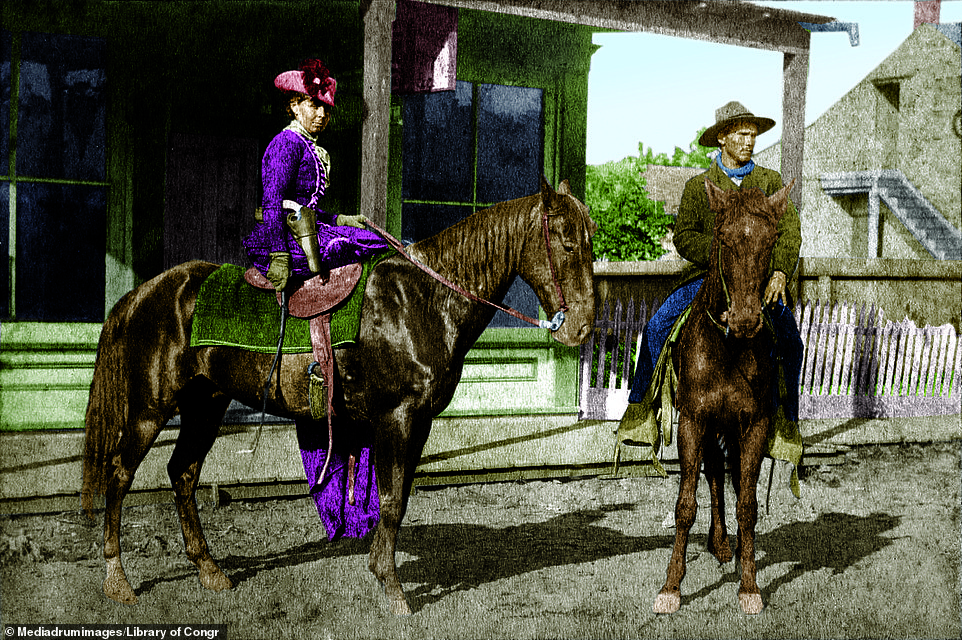 Myra Maybelle Shirley Reed Starr, who was better known as Belle Starr, was an outlaw in the Wild West whose grizzly death has remained an infamous tale from the West to this day. This colourised photograph shows her on her horse in Fort Smith, Arkansas in 1886. The picture is believed to have been taken after after she was arrested for her suspected involvement in a robbery. Starr was known to associate with the James-Younger Gang and was fatally shot after falling off of her horsein 1889 in a case that is still unsolved

One of the most iconic images of the Wild West is that of a cowboy, and this colourised photograph shows a typically well-armed and outfitted cowboy sat on his horse. The image was taken in Sturgis, Dakota Territory, in 1888 and see the horse carrying a number of the cowboy’s possessions. Cowboys would often be responsible for as many as 250 cattle during long drives to take the animals to market at the end of a season 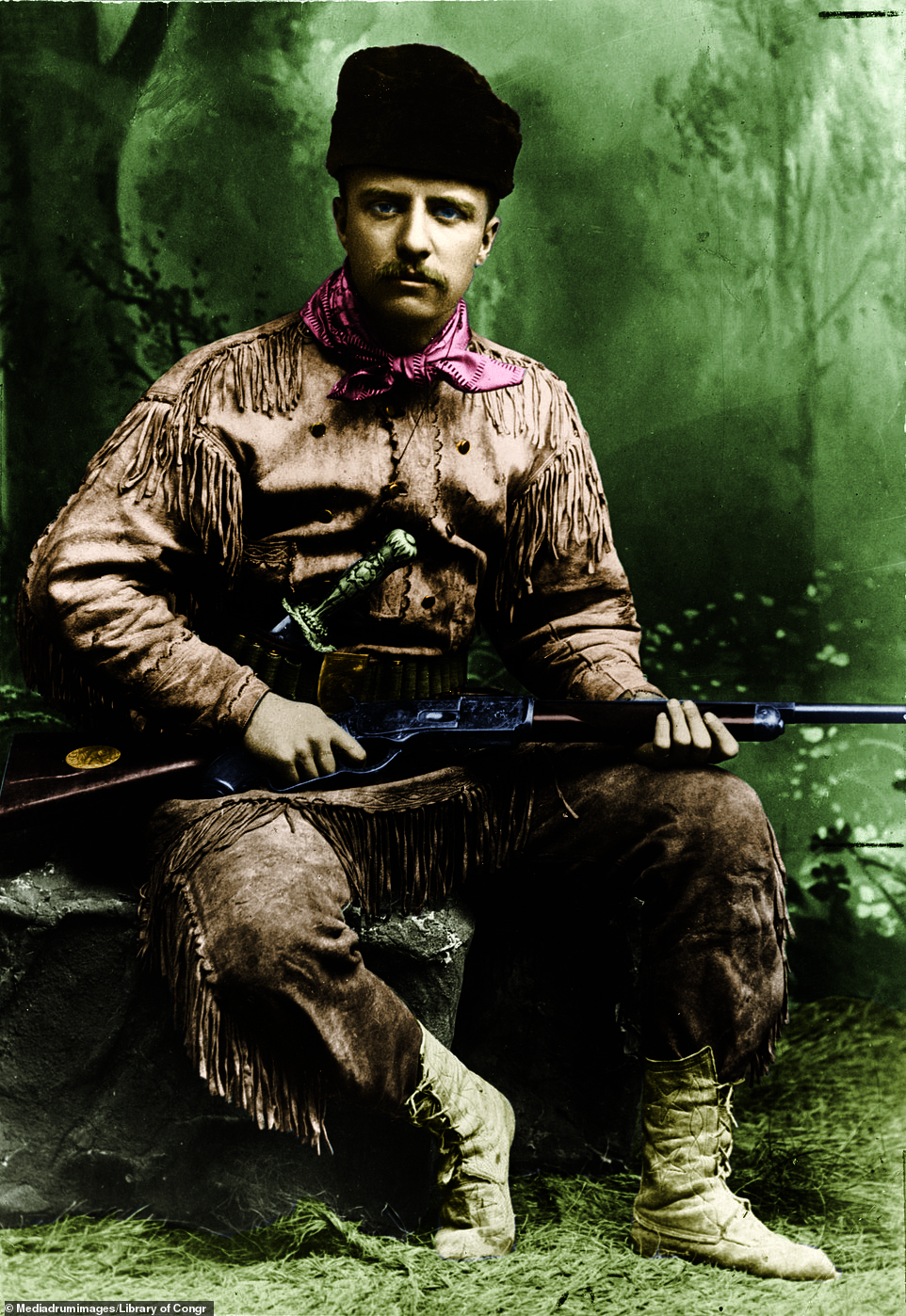 The 26th President of the United States Theodore Roosevelt was a passionate hunter, the basis of which came from his experiences in the Old West. This picture of Roosevelt at the age of 27, which was taken in New York City in 1885, shows him with a rifle in his hands. He is seen sat down wearing a buckskin hunting suit with a carved Tiffany hunting knife on his hip. In 1883 Roosevelt first visited Dakota Territory to hunt bison and, after falling in love with the cowboy lifestyle, invested $14,000 in the hopes of becoming a prosperous cattle rancher 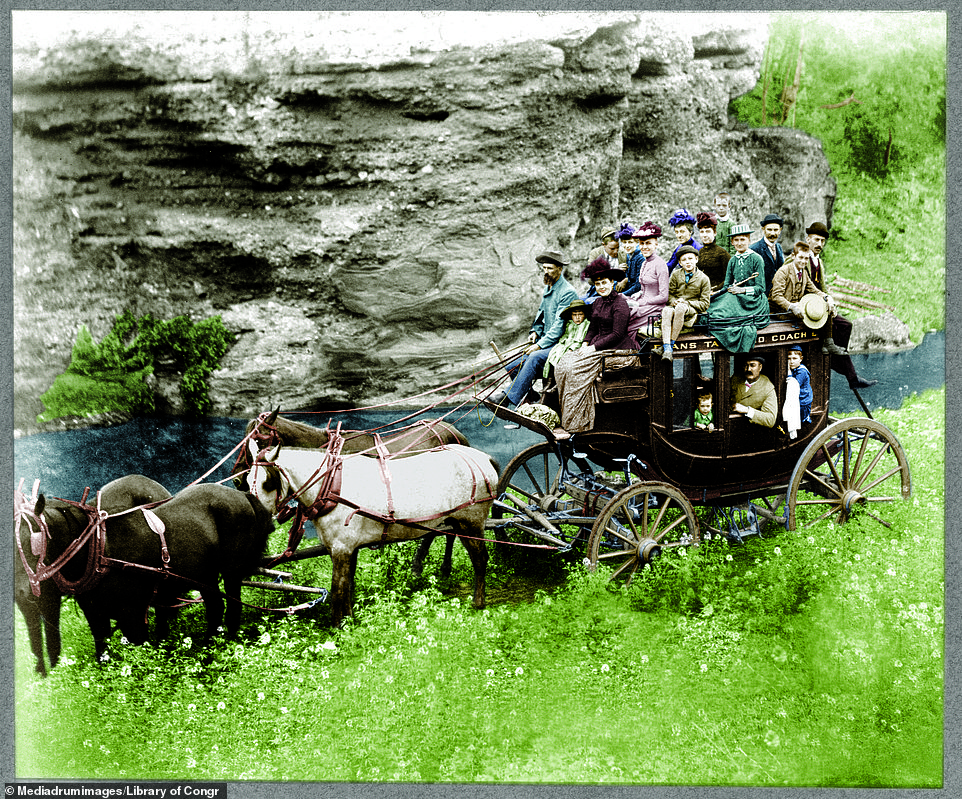 A large group of people from Sioux City, Iowa, ride on a stagecoach which is transporting them to the plunge bathhouse. Their destination was an enormous interior hot-water swimming pool in the Hot Springs, Dakota Territory, in 1889. The southern area of the Black Hills in Dakota contains a reservoir of geothermal energy which created a number of water pools that were heated, with early settlers in the area using the pools as a way of soothing their aches and pains 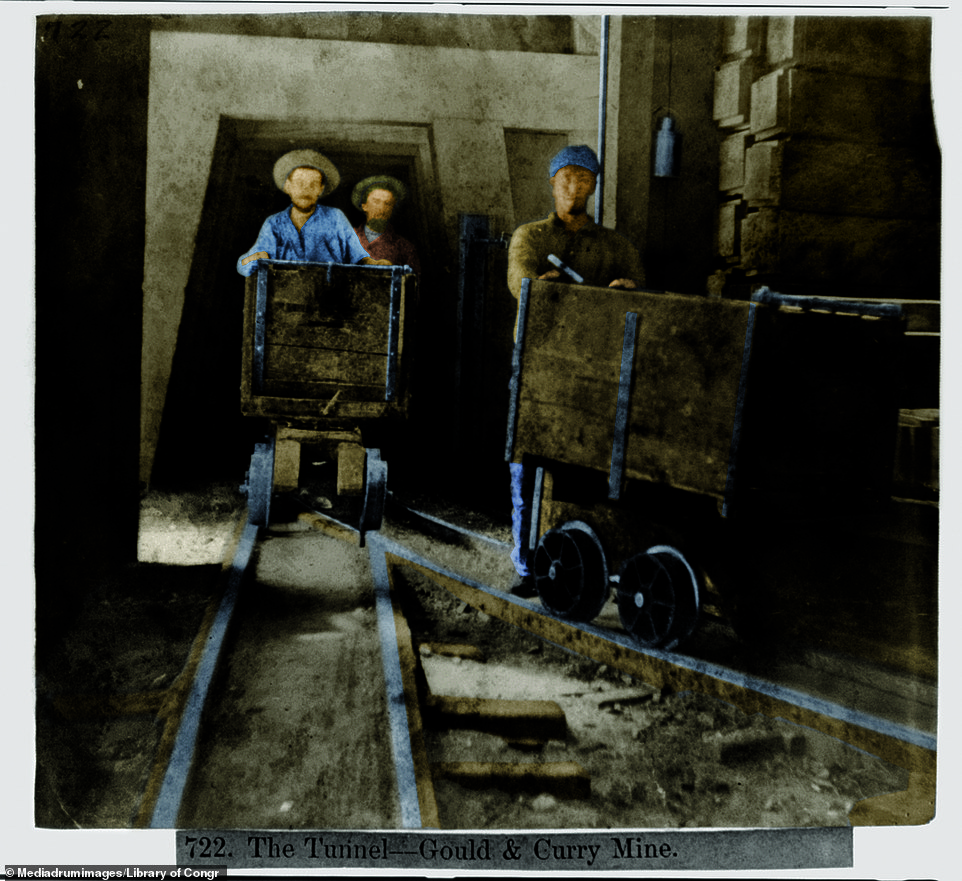 The goldrush was a famous part of life in the Old West, and this picture, taken in Virginia City, Nevada, in 1866 shows three workers inside of a Gould & Curry silver mine pushing carts along two sets of tracks. Mr Gould discovered silver in his mine on January 6, 1859, and soon partnered with mine jumper Mr Curry, who forced him to make him a partner in the mine. Mr Gould originally struck a deal with a group of prospectors to dig up the silver in the mine, but upon discovering how rich in silver the mine was, they managed to take the riches for themselves, with Gould not seeing a penny 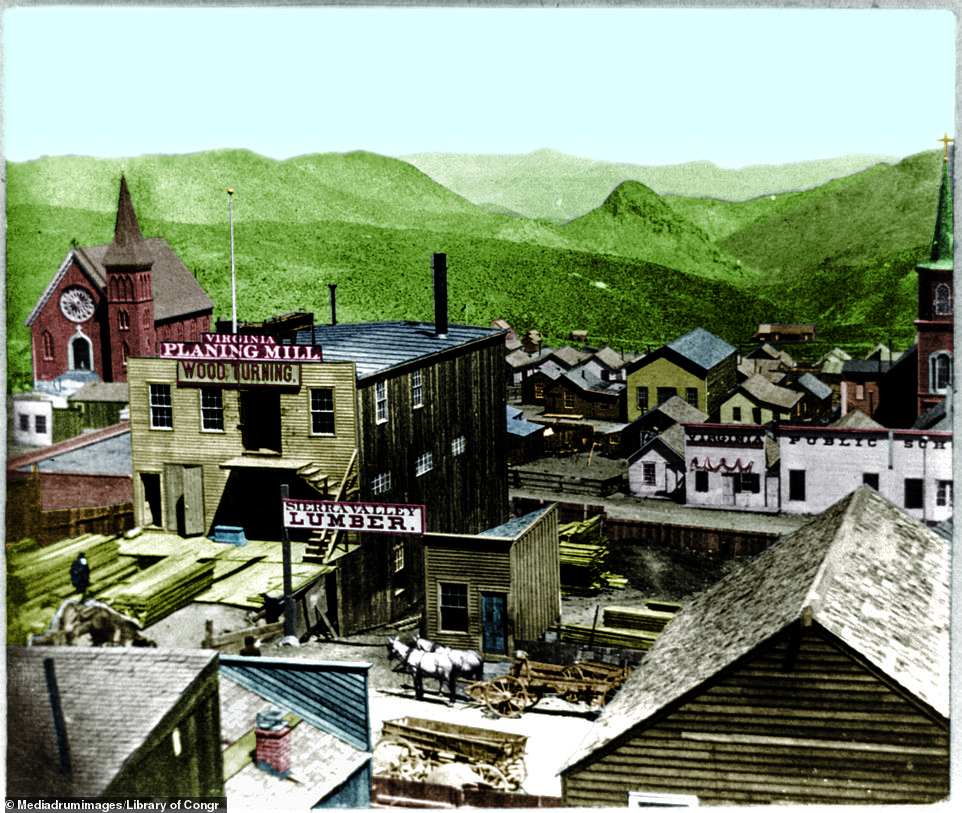 Boomtowns were a common occurrence in western America during the days of the Wild West, as people rushed to the new territories to snatch their share of the goldrush. This collection of buildings, colourised in the new book, was photographed in 1866 and shows the early stages of Virginia City, in Nevada, which seemingly sprung up overnight. The town was started after the Comstock Lode was discovered, which was the first major silver deposit to be discovered in America 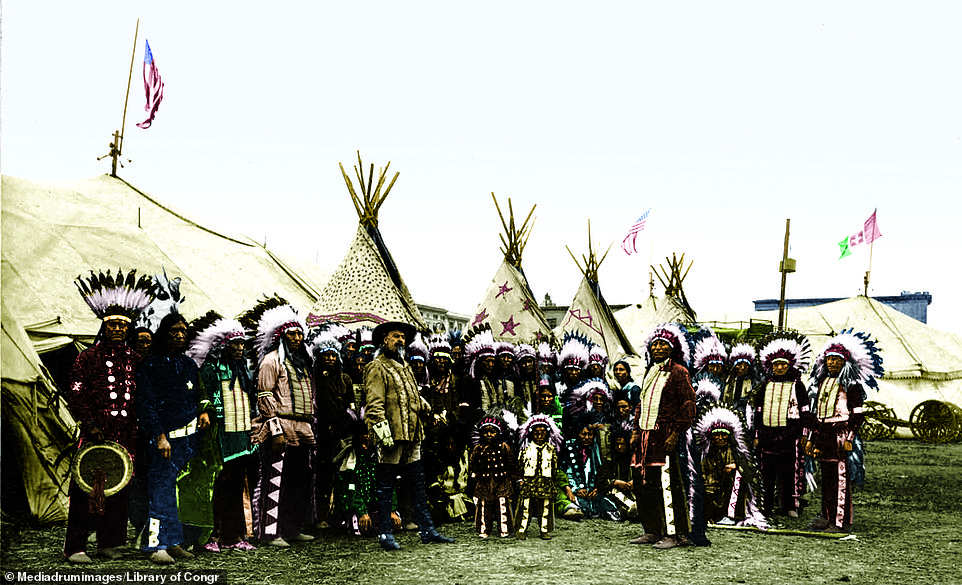 William Frederick ‘Buffalo Bill’ Cody was a soldier, bison hunter and showman whose show, Buffalo Bill’s Wild West (pictured) transformed him into one of the world’s earliest global celebrities. The group toured Europe eight times, with the first four coming between 1887 and 1892. The troupe, pictured in 1890, performed for Queen Victoria as part of her Golden Jubilee celebrations and was even invited to perform a private show for the Prince of Wales, later King Edward VII 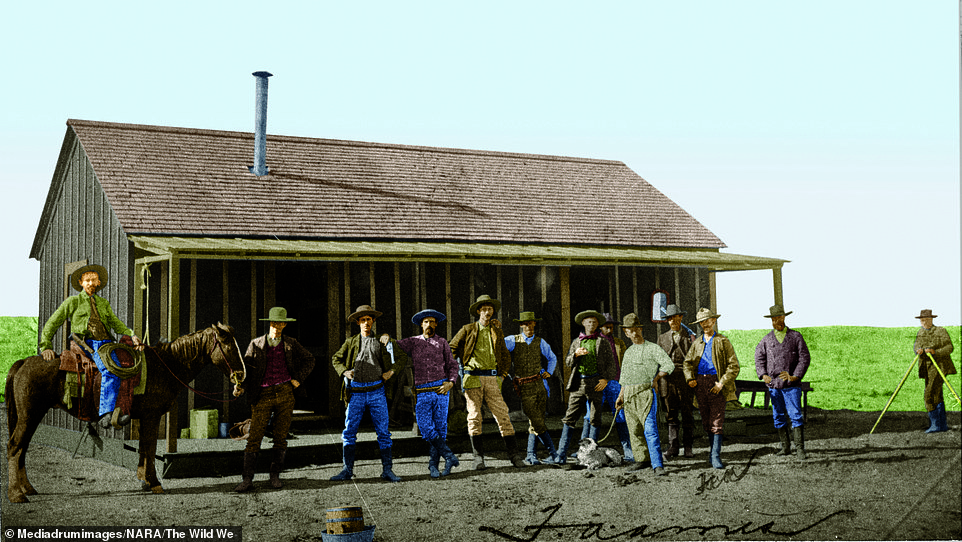 This photograph, taken in Holbrook, Arizona Territory, on an unknown date, shows a group of Aztec Land and Cattle Company’s cowpunchers standing in front of a wooden building. Cowpunchers is another term used to describe cowboys and was first coined in 1878. Although famous for herding large numbers of cattle on horseback, cowpunchers would also perform a number of other duties around a ranch 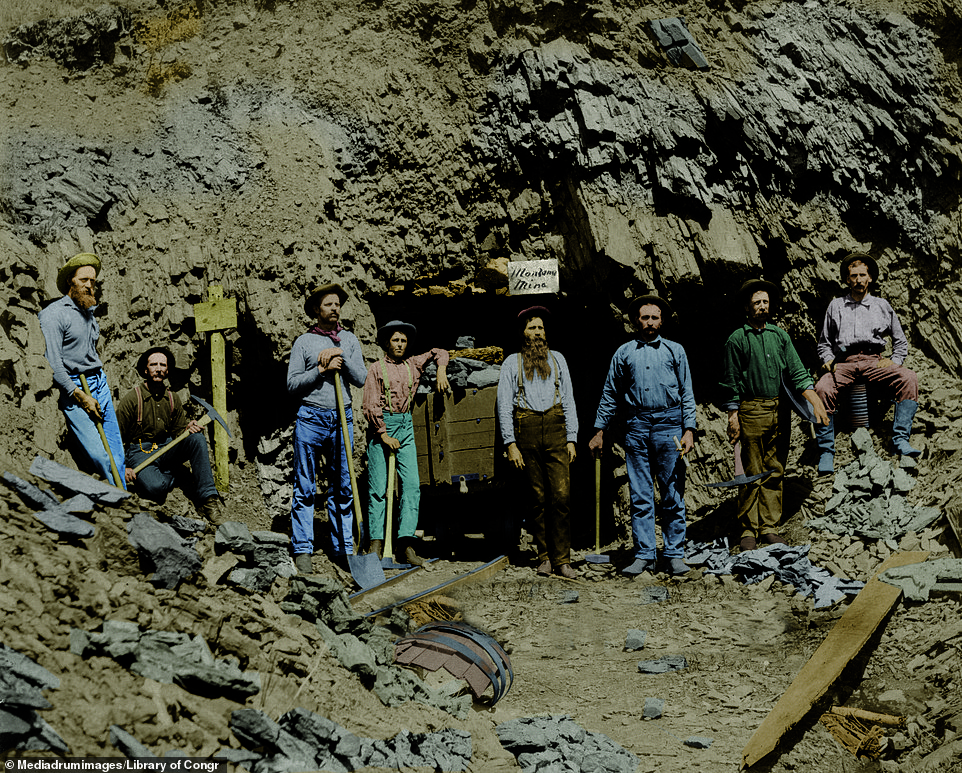 A group of eight miners are seen standing outside of the entrance to the Montana Mine in South Dakota, in 1889. Some of the men are seen wielding pickaxes in their hands, while others are pictured leaning on spades and sledgehammers. The area of Montana is rich in copper, silver, gold, manganese, zinc, lead and molybdenum. Reports of gold having been found in Montana date back to as early as 1852, though only in small quantities. 10 years later though, Montana was hit by the gold rush after rich veins of the material were discovered 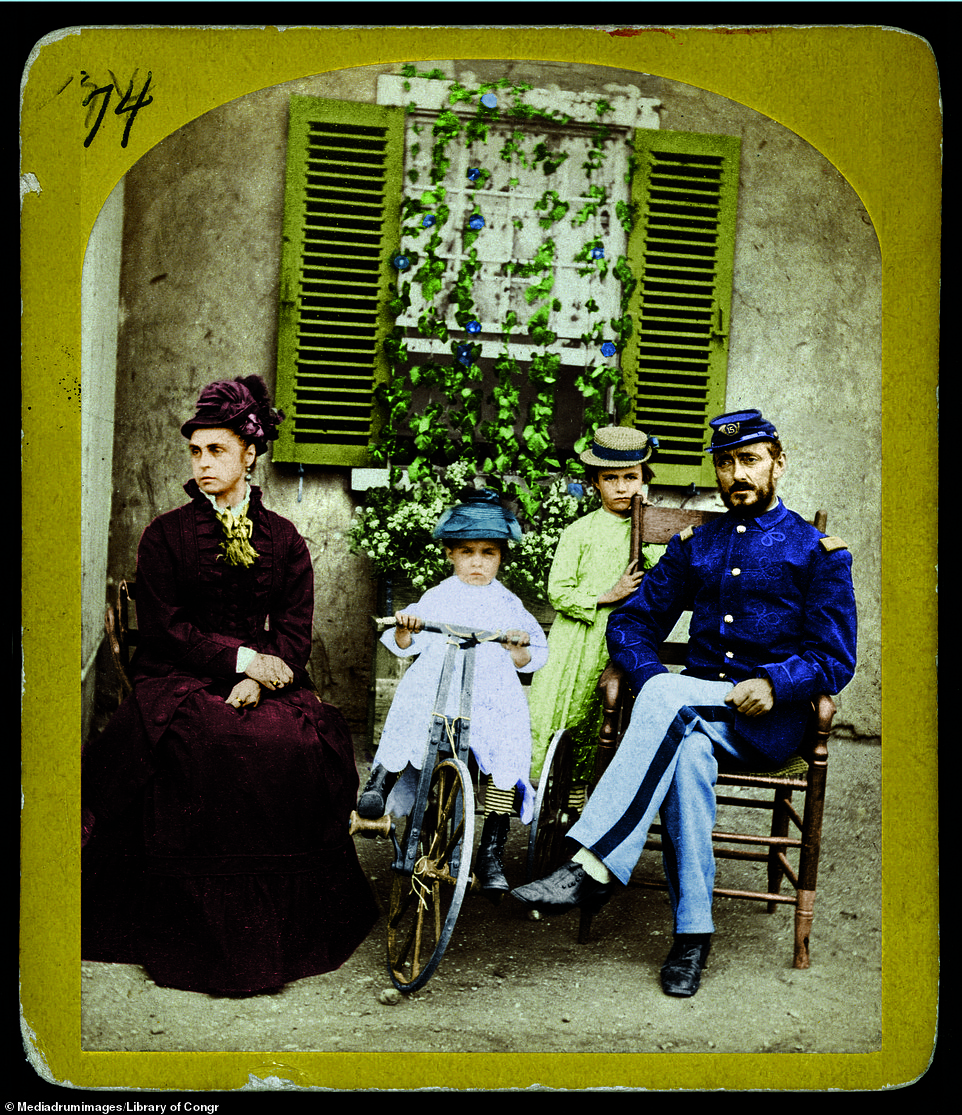 This picture, included in the new book, shows a soldier sitting with his family at Fort Garland in Colorado in 1874. Fort Garland was established by the US Army in 1858 to protect settlers from indigenous tribes in the San Luis Valley – which at the time was part of the New Mexico Territory. The fort was abandoned by the army in 1883 after the native tribes were confined to the Indian reservation in Utah Territory and Colorado 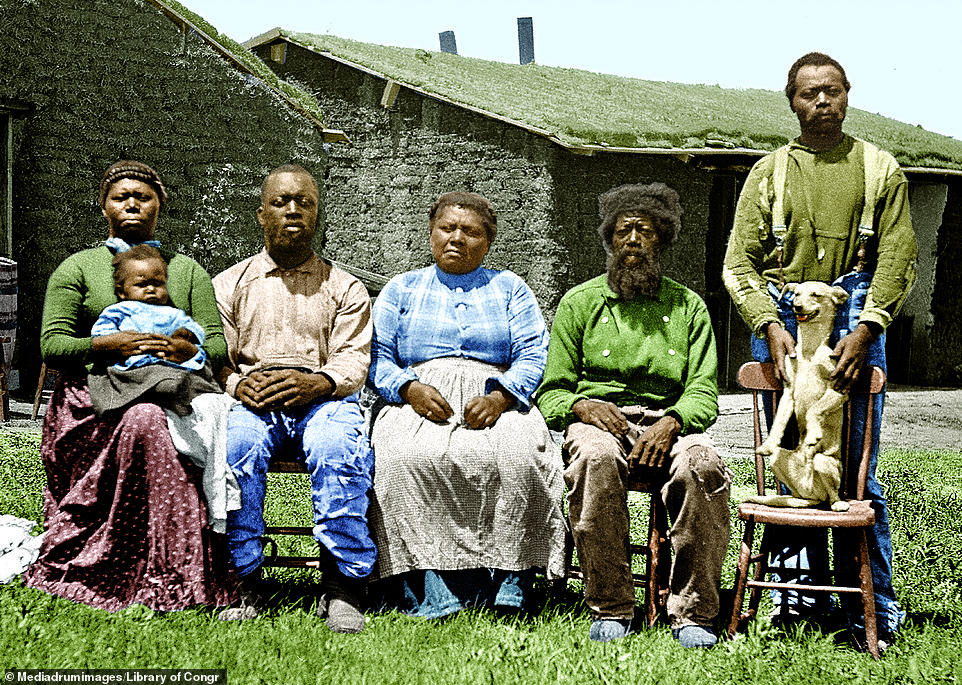 This family photo was taken in Nebraska in 1887 and shows the Shores and Speese familied. Pictured are Moses Speese and his brother Jeremiah Shores, both of whom took the names of the men who had formerly owned them as slaves. The brothers had been separated during slavery but were later reunited in Nebraska 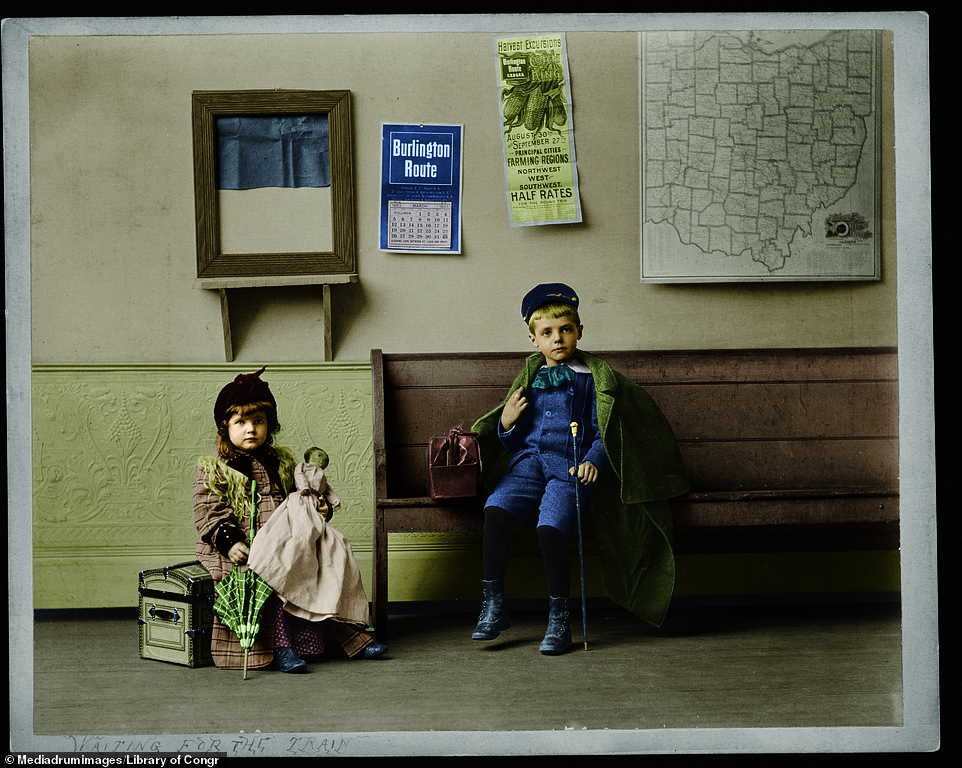 A small boy and girl sitting patiently at a train station in March 1893 in this colourised photo. A sign on the wall says ‘Burlington Route’ which was a railroad that operated in the Midwestern United States and was founded in 1848. The girl is seen clutching a small umbrella and a doll, while the boy, who is sat on a bench, has a large coat draped over his shoulders and is clutching a walking cane in his left hand 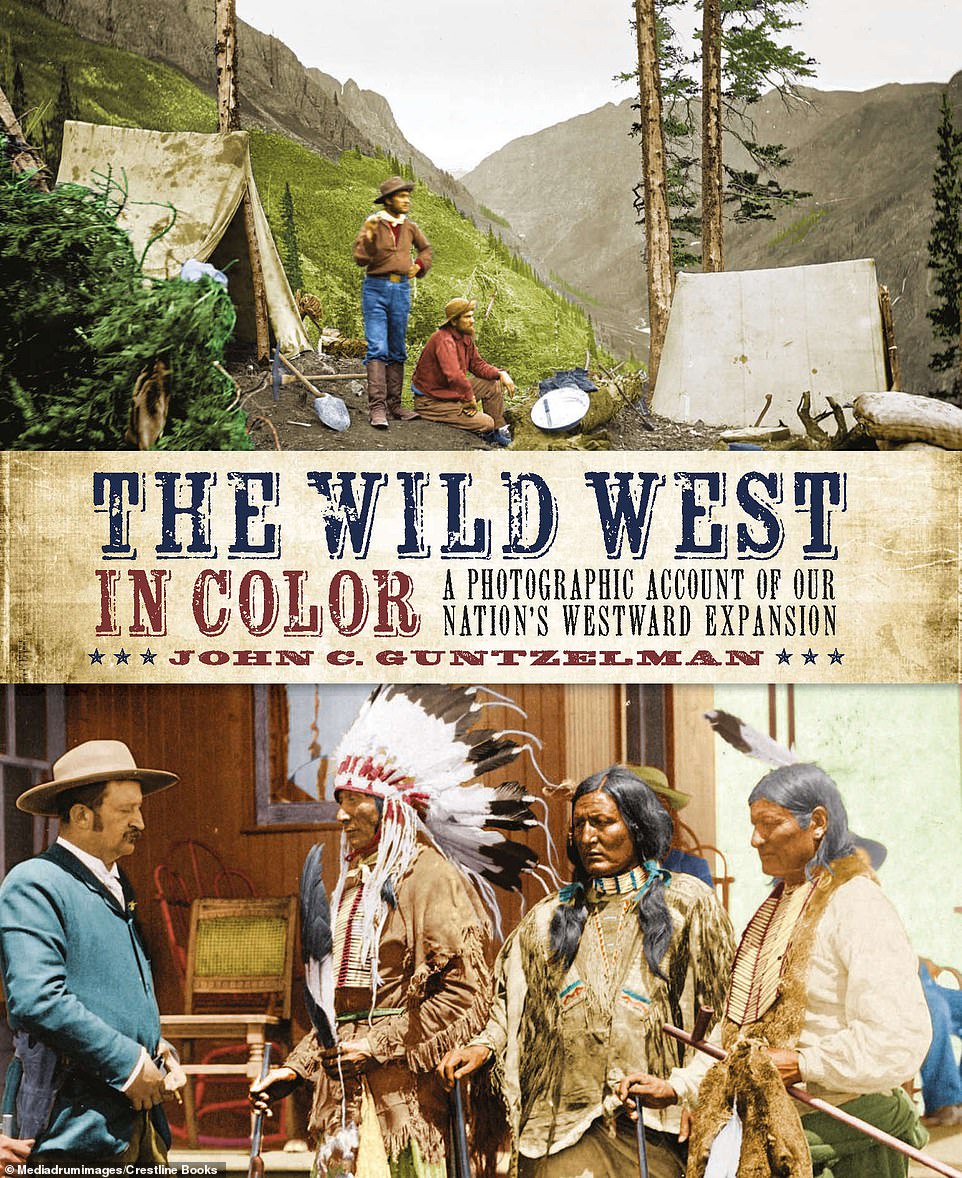 The spirit of the Wild West has been brought back to life through a series of historical photographs which have been colourised for the first time in a new book, The Wild West in Color: A photographic Account of our Nation’s Westward Expansion. Pictured: The front cover of John C. Guntzelman’s new book which lifts the lid on the Wild West, with more than 200 colourised historical images