Millionaire businessman, 48, collapses and dies while trying to find burglars at his farm who fled before police arrived 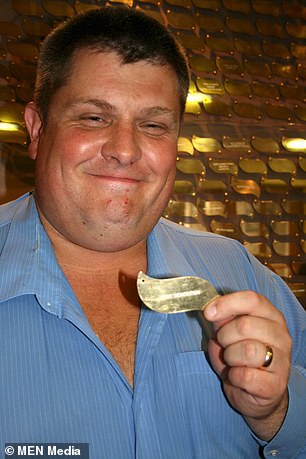 Peter Cordwell, 48, collapsed and died while trying to find burglars at his farm in Greater Manchester

Tributes have been paid to a business ‘legend’ who was found dead on his farm after suffering a ‘medical episode’ during a suspected burglary.

Peter Cordwell, 48, fell ill and was pronounced dead at the scene in Heywood, Greater Manchester, on Wednesday night despite the best efforts of paramedics.

Police were called to reports of a break-in at at Collop Gate Farm, off Manchester Road, at around 11.15pm on Wednesday.

Mr Cordwell was well-known in Heywood as a director of Spodden Mill Ltd and as the former owner and director of PGC Demolition.

The farm was sealed off on Thursday as an investigation continued, with crime scene investigators pictured at the site.

Hundreds of tributes have been to businessman Mr Cordwell, a father-of-three known affectionately as ‘Creamy’.

His devastated wife said online: ‘Thank you so much to every single person who has sent kind message. To say we are totally devastated is an understatement.

‘He was the love of my life. We spent the last 24 year together, married for 21 years. 3 kids and an business empire later.

‘I’ll love you for the rest of my life. You were my soul mate.’

His daughter, Pip, posted a picture of her father and wrote: ‘The Man, The Myth, The Legend.’

A friend said: ‘It’s a great loss, he was the a true gentleman, kind and always happy to give advice. He supported local charity. And he wasn’t scared to say what needed saying.’ 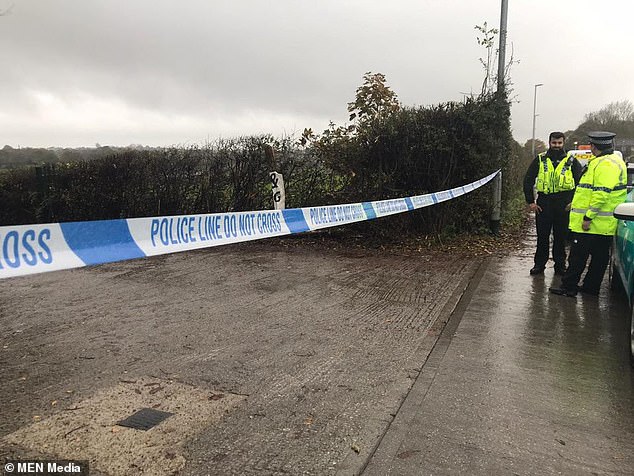 Police were called to reports of a break-in at at Collop Gate Farm, off Manchester Road, at around 11.15pm on Wednesday. Mr Cordwell fell ill and was pronounced dead at the scene. Pictured: Police outside his farm on Thursday

Another added: ‘It’s so shocking and heartbreaking. Such a lovely man with a smile on his face every time you saw him. He would do anything to help anyone and raised thousands for numerous charities over the years.

‘His farm played a part in a lot of local events including his annual 1940s weekends which were spectacular, with real live tank rides.

He had time for anyone and everyone. Nothing was off limits when it came to to him.

‘It’s such a tragic loss of such a big personality with an even bigger heart.

He leaves a whole town shocked and heartbroken at his passing and a world just that little bit darker with a shining light extinguished but I know that his legacy will live through his family.’

Police said the suspected burglars fled the scene prior to the arrival of officers. No arrests have been made.

GMP said in a statement: ‘Officers attended and found a man – one of the owners – had subsequently suffered what is believed to have been a medical episode.

‘Despite the best efforts of paramedics, he sadly died a short time later.’

Detective Inspector Julie Maxwell, of GMP’s Rochdale district, said: ‘I would like to start by saying that the investigation team’s thoughts are with the man’s loved ones and specialist officers are supporting them.

‘We believe the man suffered a medical episode but enquiries are ongoing and a post-mortem investigation will confirm the cause of his death. 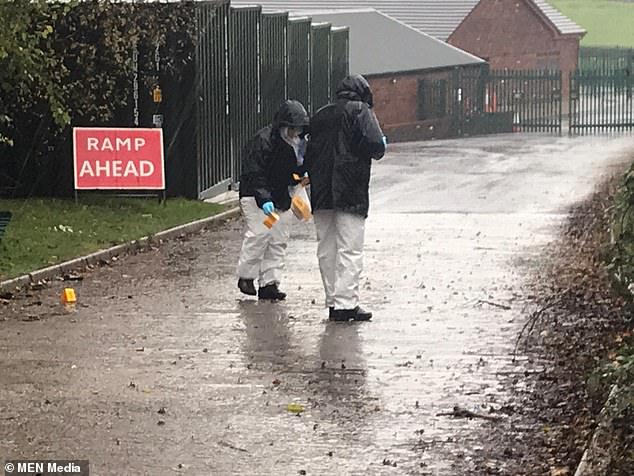 The farm was sealed off on Thursday as an investigation continued, with crime scene investigators pictured at the site

‘Our investigation is in the early stages but we are working hard to establish the full circumstances surrounding both the death of the man and the reported burglary.

‘I would like to use this opportunity to appeal to anyone with information, regardless of the perceived significance, to contact us, or Crimestoppers – anonymously – as soon as possible.

‘We understand that members of the public may be concerned by this incident.

‘I would like to offer some reassurance by saying that, although we are keeping an open mind, there is evidence to suggest the burglary was targeted.

‘Regardless, extra officers are in the area and will remain for the foreseeable future.

‘Anyone who is concerned can speak with them.’

One neighbour said: ‘We saw flashing lights and the police and this morning, we got up to find police were everywhere. This is a real shock to us.’

Another neighbour added: ‘The man had gone to the farm to investigate

after he was alerted to a possible break-in.’