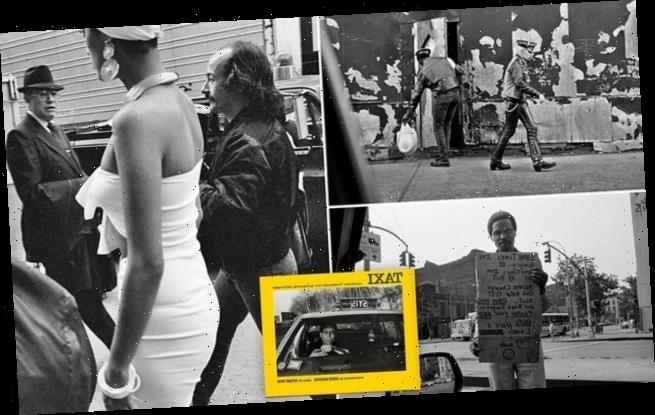 A tale of two New Yorks: Cab driver’s photos show changing face of NYC in the 1970s and ’80s from scantily-dressed sex workers and homeless people to models and families in their Sunday best

From scantily-dressed sex workers to families dressed in their Sunday best, a New York City cab driver’s photos capture the collision of ‘the two New Yorks’ in the late 1970s and ’80s, as the AIDs epidemic and drug turf wars tore through the city.

Brooklyn-born photographer Joseph Rodriguez, now 70, captured the marginalized characters and the street culture of the day while moonlighting as a taxi driver to put himself through school, and his pictures have now been released in a new book, Taxi: Journey Through My Windows 1977 – 1987.

Before the crime-busting feats of the the likes of former New York City Mayor Rudy Giuliani and NYPD Commissioner William Bratton, the city was awash with drugs and violence, with up to 2,000 homicides being recorded per year in the late 1980s.

‘NYC was also a place of chaos and mayhem,’ writes novelist Richard Price in an essay for the new book.

‘Teetering on the brink of bankruptcy with rampant crime it was the city’s drug users, dealers, and pimps and prostitutes who ruled the streets of Manhattan.’ 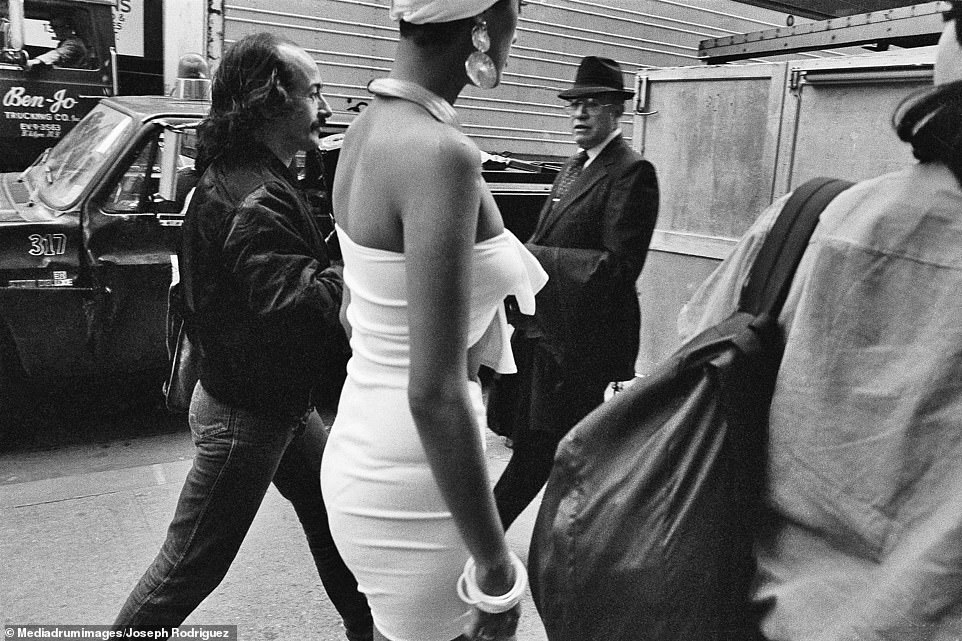 A model walks along 58th street accompanied by her stylist and wearing clothing by Italian fashion house Fiorucci as male onlookers shouted, ‘Hey Mami.’ These colliding worlds of New York in the 1980s provided inspiration to Joseph Rodriguez 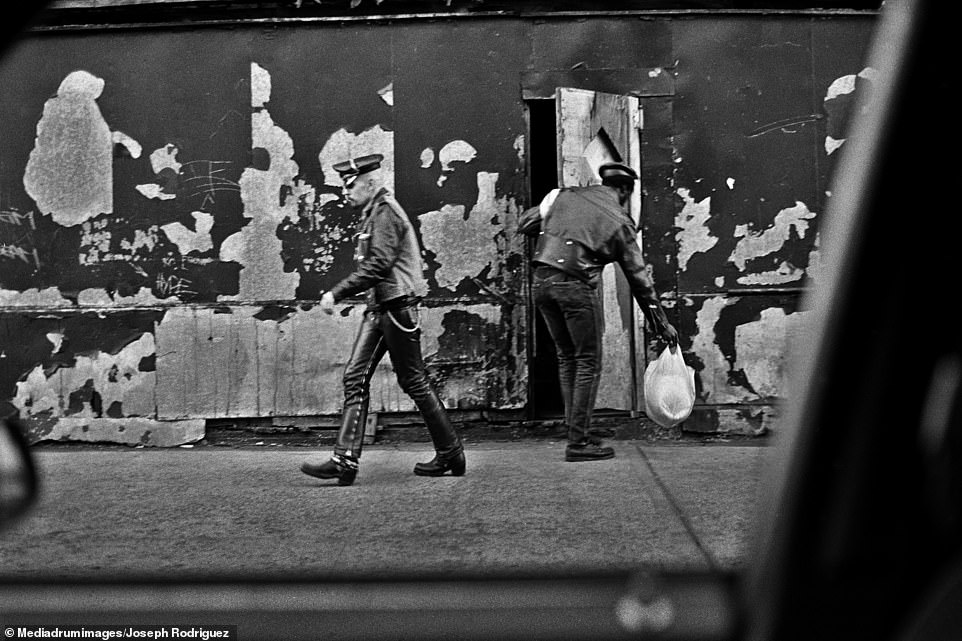 Joseph once picked up a man from Hellfire – an infamous S&M club in the city’s Meatpacking District – in an all leather get-up. By the time they reached 89th street, the man had changed into a pink Oxford shirt and was greeted by the doorman at his apartment building 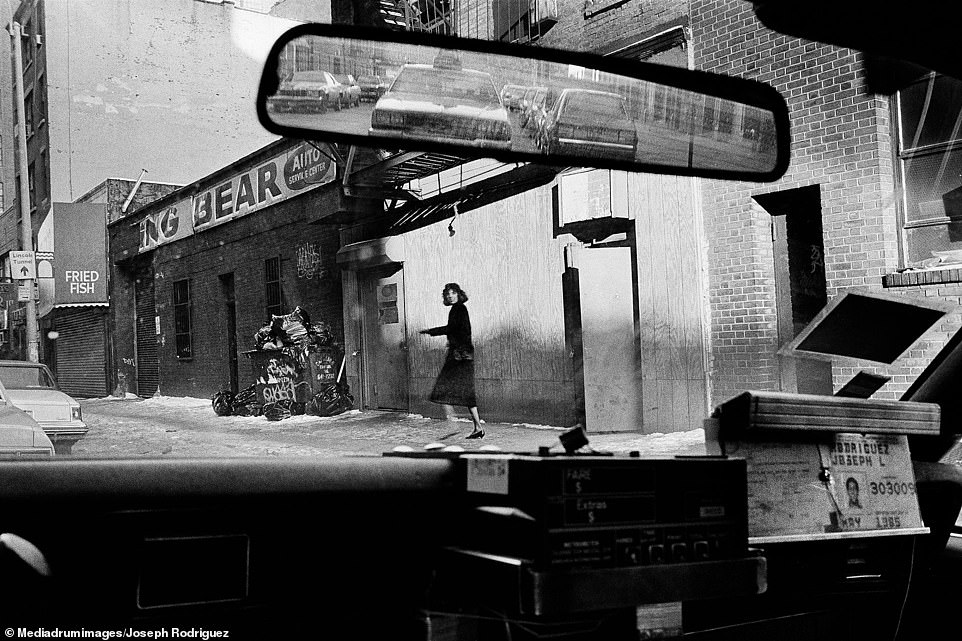 A woman appears startled to have been caught by Rodriguez’s lens, outside an after-after-hours club that ran from five-in-the-morning until five-in-the-afternoon 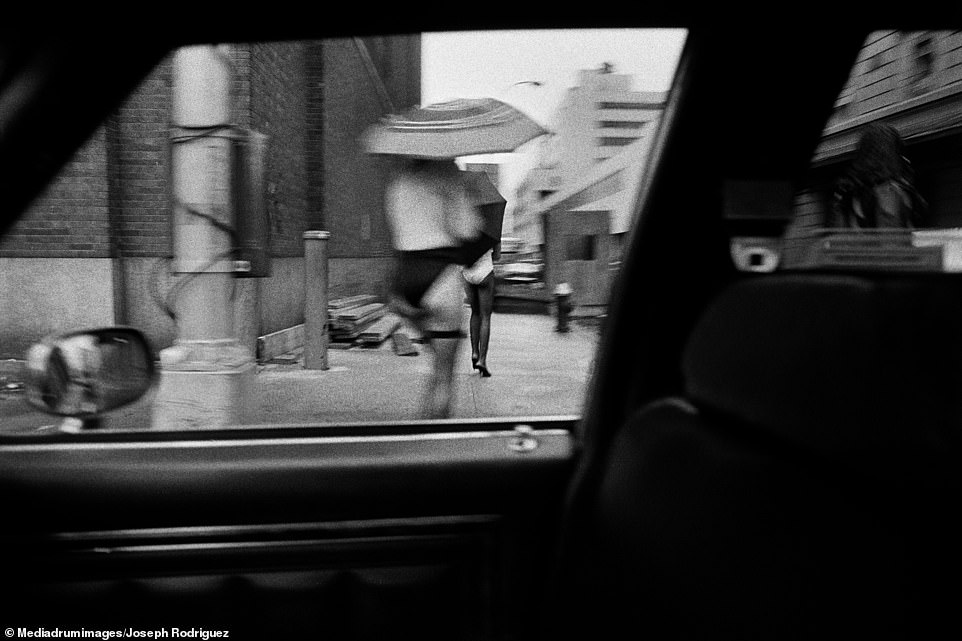 A sex worker leaves Rodriguez’s cab after being threatened at knife point by her pimp. Violence was an occupational hazard for sex workers and taxi drivers during the crime-plagued New York of the 1970s and 80s 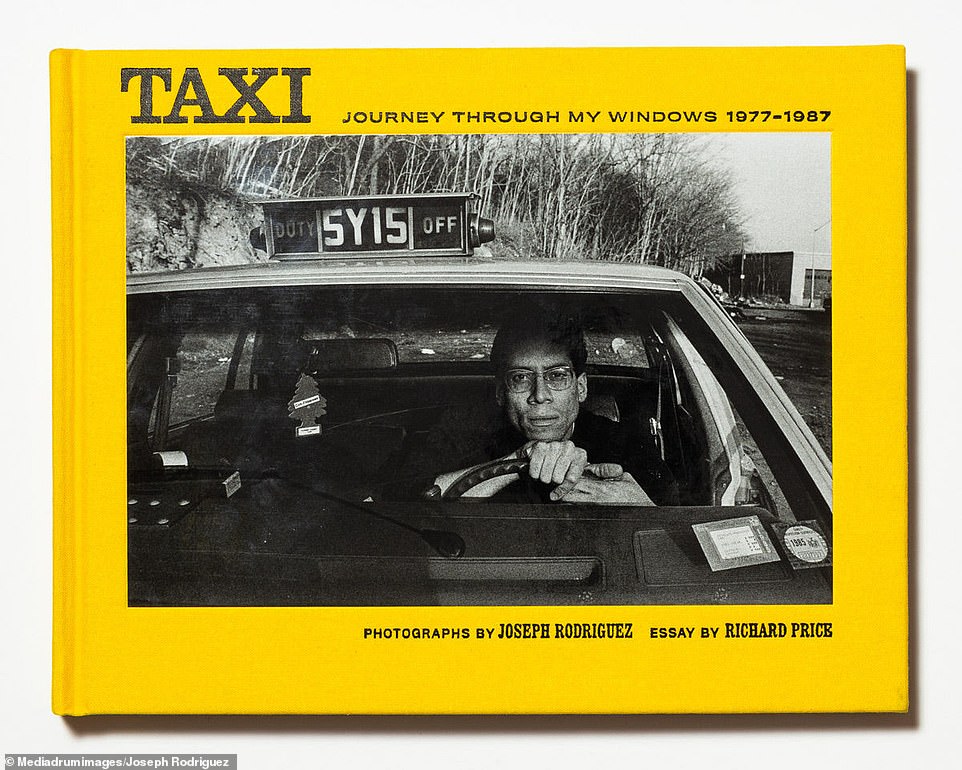 Joseph Rodriguez, pictured above, drove a taxi in New York’s edgier neighborhoods for 10 years to put himself through photography school

Rodriguez told the DailyMail.com he started driving a taxi seven days a week to pay his way through New York’s School of Visual Arts where he studied photojournalism.

‘New York City was tough and rough back then. It was easy to get robbed. We didn’t have those plastic protection devices that we have today.’

Rodriguez would work primarily in the Westside, Hell’s Kitchen and the Meatpacking Districts, which in those pre-gentrification days were riddled with sex workers, pimps and drugs.

Rodriguez personally felt the brunt of the city’s crimewave: he was nearly stabbed twice, once by a pimp who and another time after three ‘six-foot Amazonian transvestites’ entered his cab and got into an argument over a love interest.

He was also mugged and had his camera equipment stolen, but undeterred, he continued to document the downtrodden and the desperate.

‘There’s the naked city at night when we’re sleeping. And then the city wakes up, and people go to work and go to church.’

Rodriguez recalls picking up a man dressed fully in leather as he exited an infamous sadism and masochism club in the city’s Meatpacking District called Hellfire.

‘Once we arrived at his home on 89th St, he comes out of the cab with penny loafers, khakis and a pink Oxford shirt. And the doorman said, ‘good morning sir’. 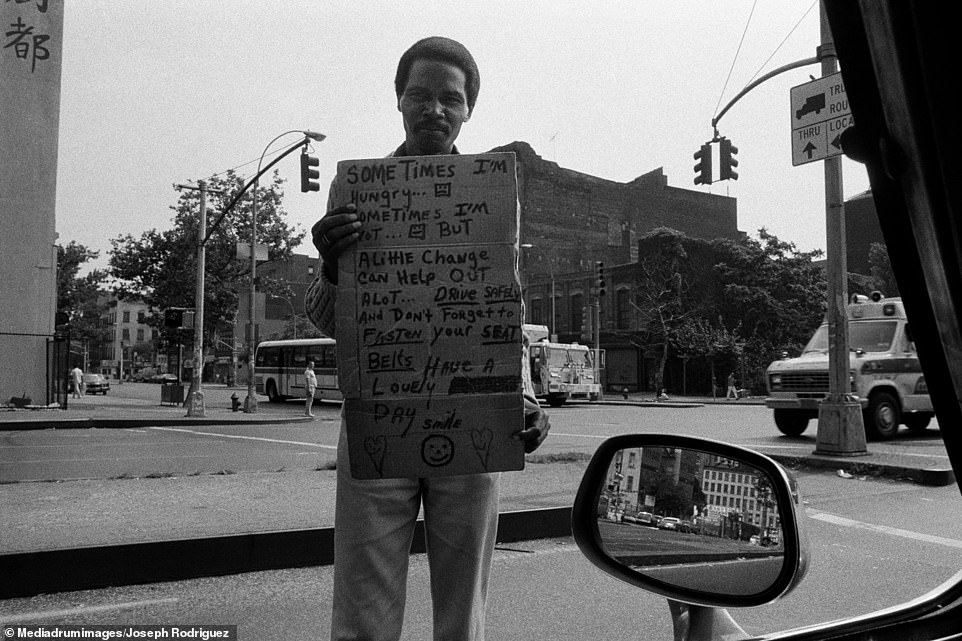 A man holds a cardboard sign that reads, ‘Sometimes I’m hungry, sometimes I’m not, but all the change can help out a lot,’ highlighting the city’s poverty crisis 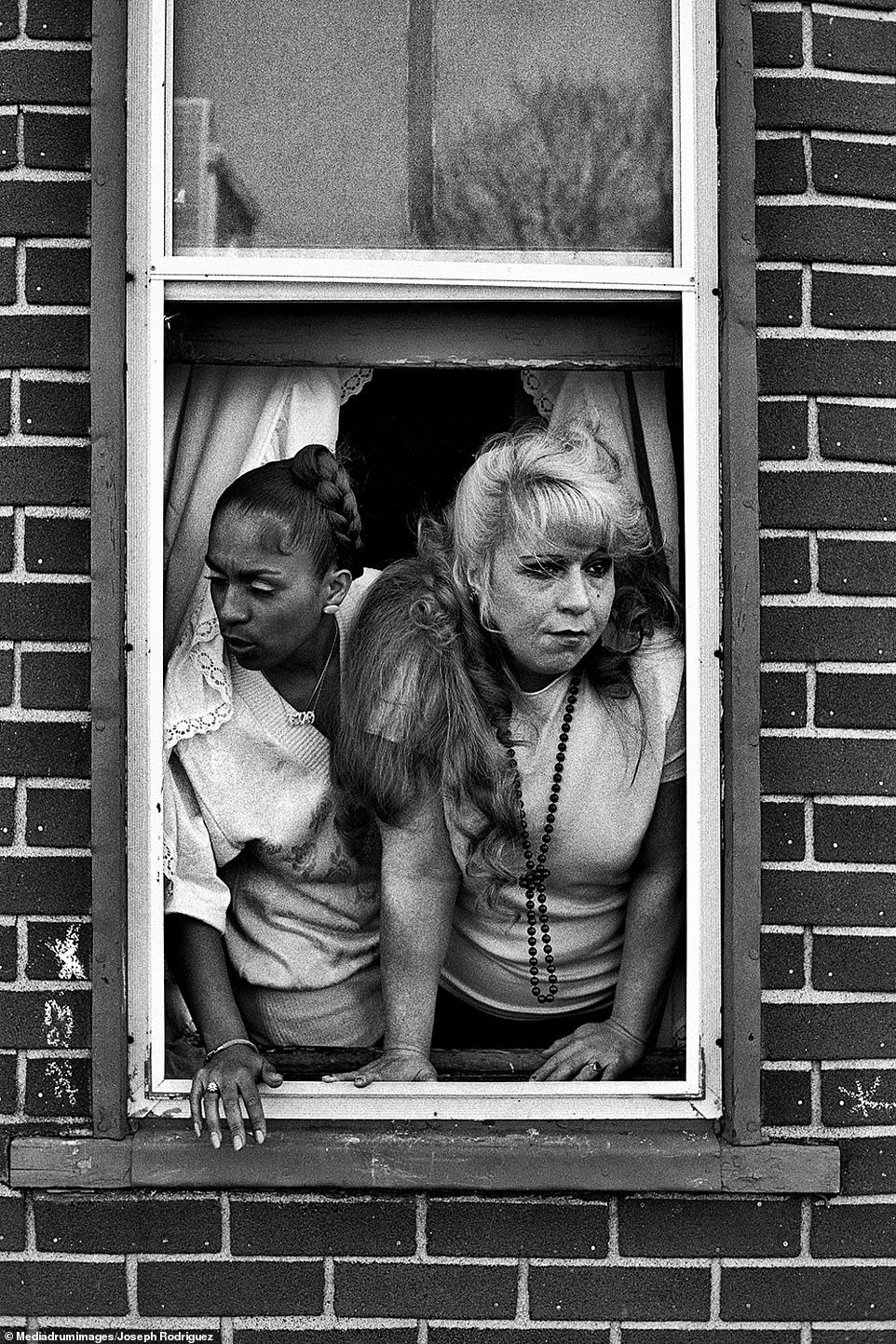 Two women look out the window in Park Slope, Brooklyn. Rodriguez said in those days, many taxi drivers wouldn’t accept rides from African-American or Latino passengers 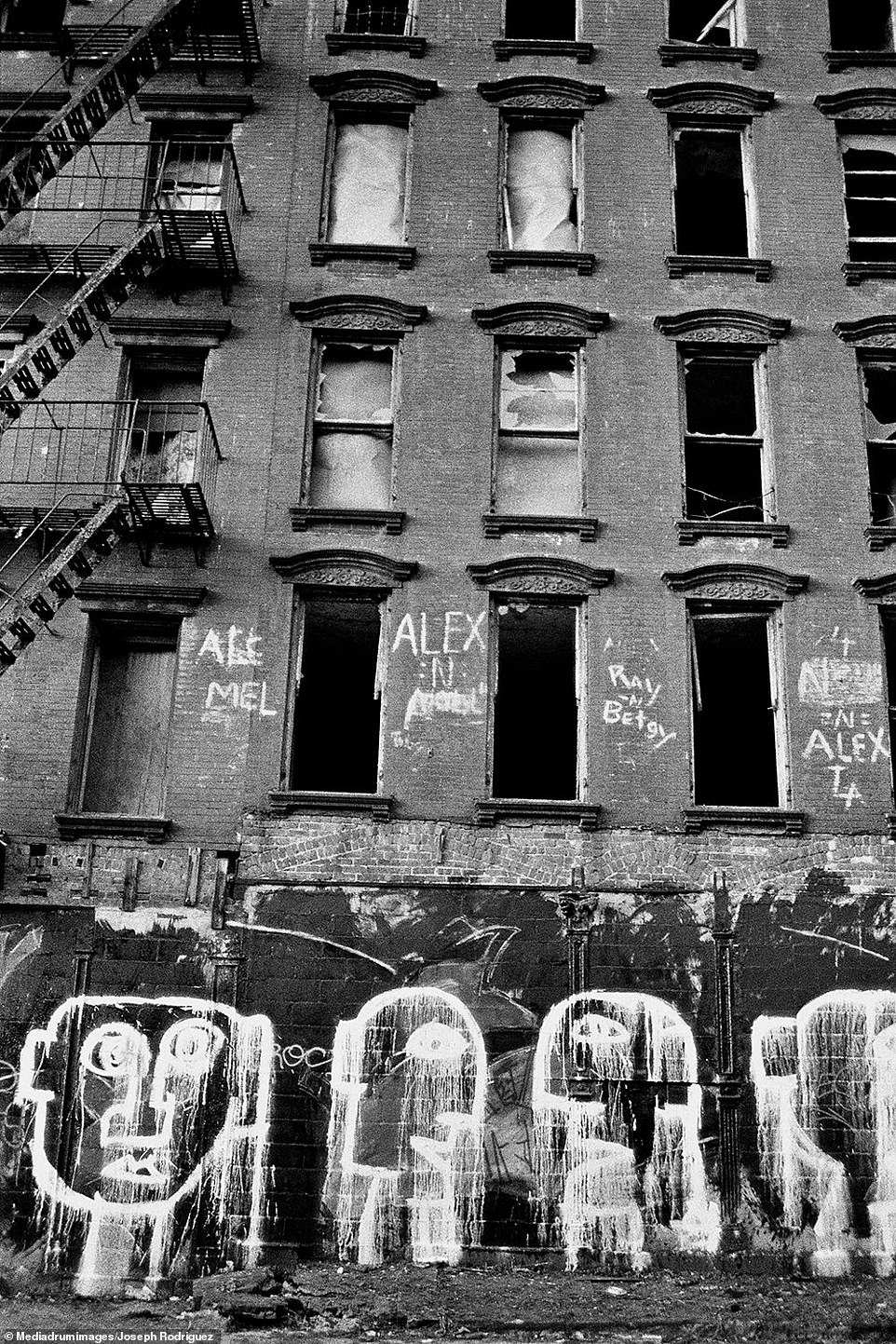 Graffiti in the East Village by Luca Pizzorno, who died of AIDs in the ’90s. By 1995, around 8,000 New Yorkers were dying from HIV/AIDs every year 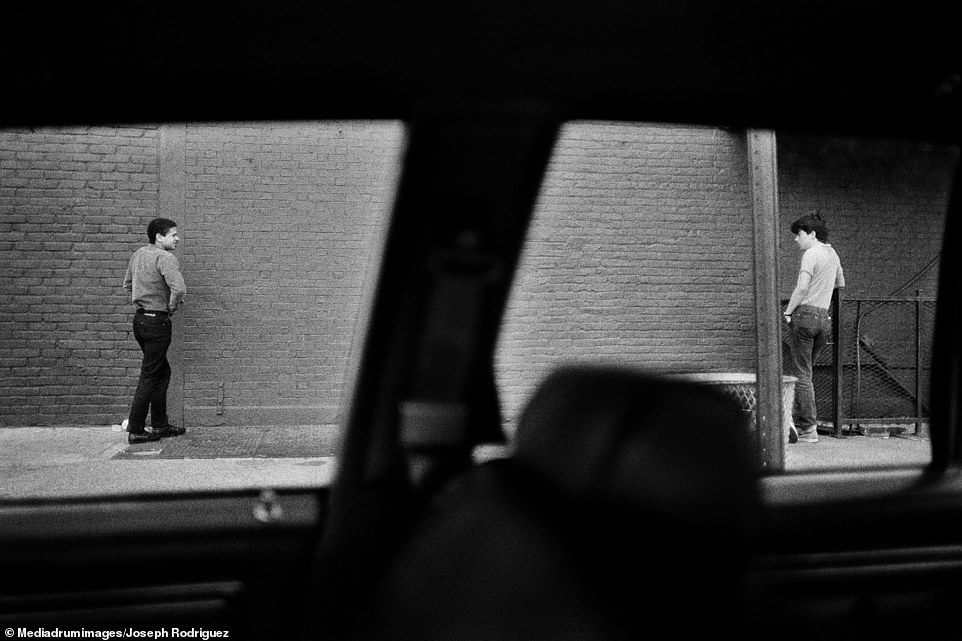 Two men photographed chatting in the Meatpacking District near the Hideaway Hotel – a known hook-up spot. Rodriguez said the gay men were especially overt about their liaisons certain areas of the city

As a cab driver, Rodriguez also saw how the city was devastated by drugs and then the AIDs epidemic of the 1980s.

Like the Covid-19 pandemic of 2020, HIV and AIDs tore through New York with greater deadliness and speed than anywhere else in the United States.

The first cases of what would later become known as AIDs were reported in the United States in June of 1981 by the Centers for Disease Control and Prevention.

Largely affecting the LGBTQ community, it had a disproportionate impact gay and bisexual men, and on racial and ethnic minorities.

Ignorance and shame about contracting what was sometimes referred to as the ‘gay plague’ caused a lack of urgency both among Government in providing treatment for the disease, and sufferers in seeking help.

‘Men were partying like there was no tomorrow,’ says Rodriguez.

‘I would take guys to a club on Thursday and they wouldn’t come home until Sunday morning.

‘Then the AIDs came, it happened very quick, people were dying. There were no drugs to help anybody. It was a very scary time.’

At its height in the mid-90s, as many as 8000 New Yorkers a year were dying of the disease.

At the same time crack – a highly addictive form of cocaine – had taken over many inner-city neighborhoods, leading to extreme violence by the gangs that sought to control its supply. 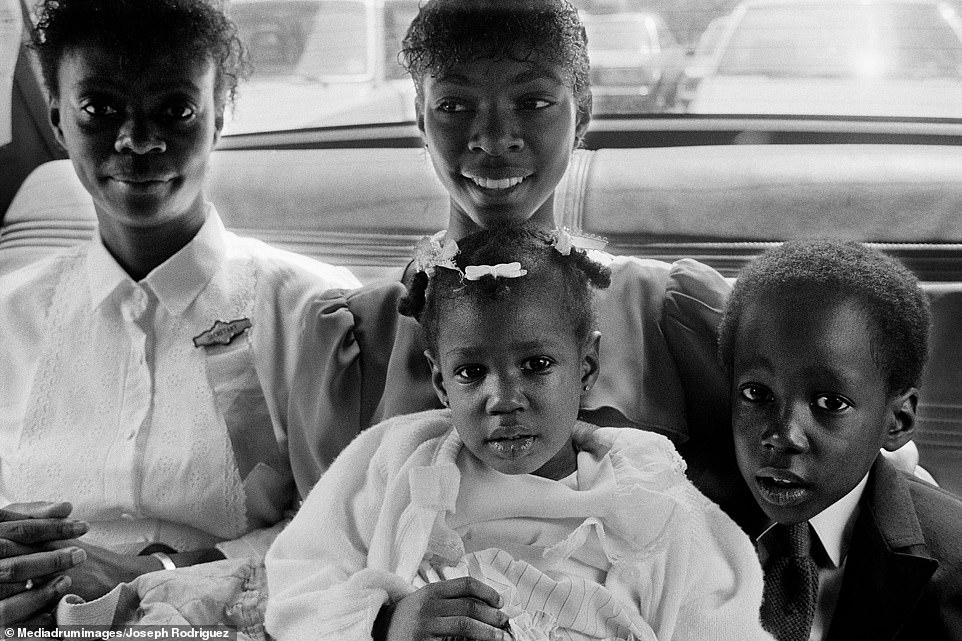 An African-American family on their way to church in their Sunday best. Rodriguez says New York is really two different cities, as separate as day and night 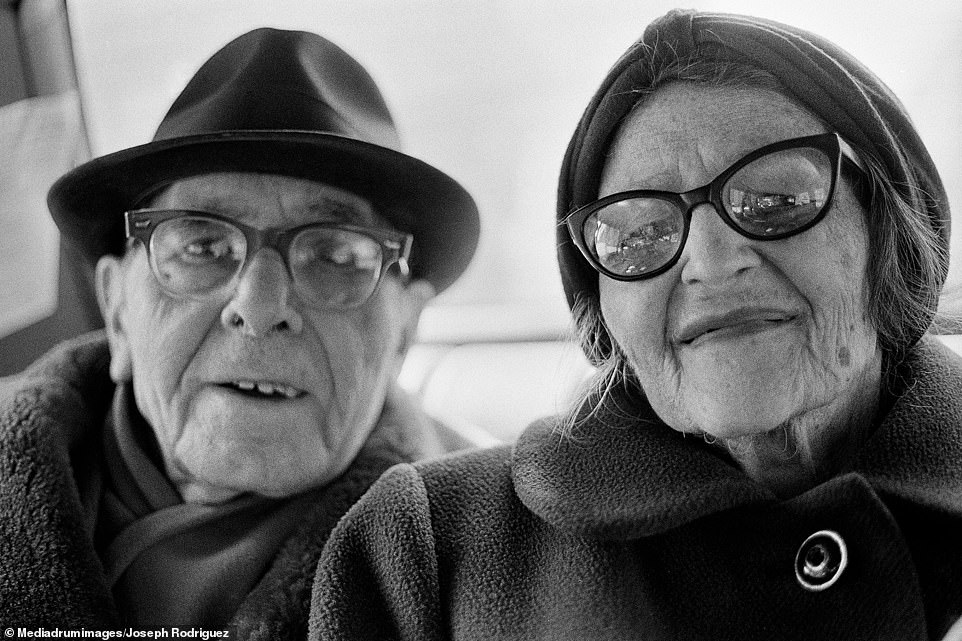 Whilst experiencing relationship difficulties, this couple told Joseph that their secret to marriage was ‘love and compromise’ 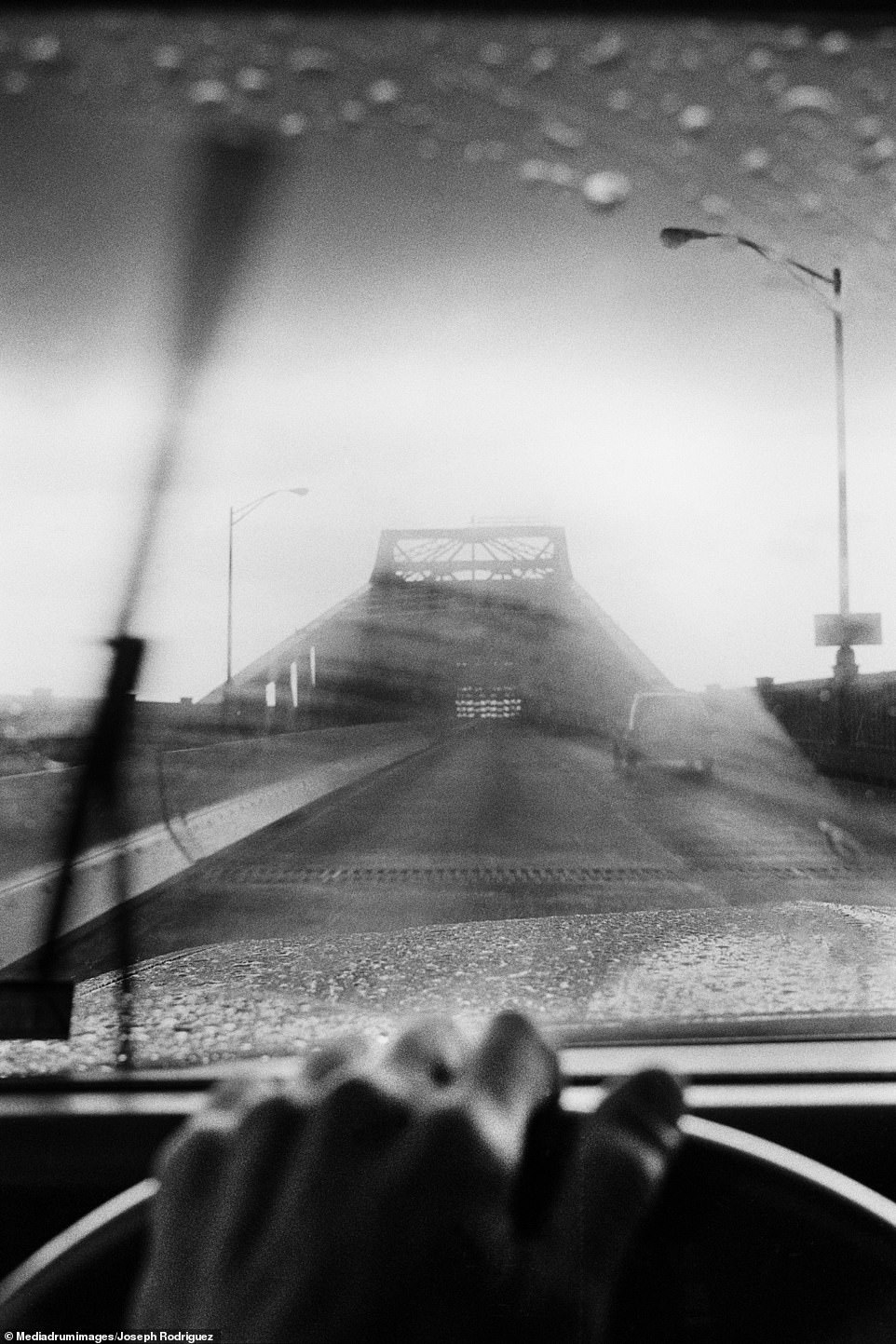 Rodriguez drove his cab in all weather types including on this murky, rainy morning, and says he was one of the few drivers who would accept fares to all parts of the city

Richard Price, who wrote accompanying words in the new book, writes: ‘When I think back on what it was like to live in New York City from 1978 to 1987, the first thing that comes to mind is the old Chinese curse, “May you live in interesting times”.

‘In that ten year span, it felt like the city was getting its teeth kicked in on a daily basis, encompassing as it did, the dawn and high noon of the AIDS crisis, one municipal budget crisis after another leading to wage and hiring freezes, labour strikes, and in general, an overall deterioration.

‘Street crime was off the hook, cocaine turf wars raged and by the mid to late 1980s, the prevalence of crack – a nihilistic WMD if there ever was one – had begun to impose its own brand of devastation on a city already deep in trauma.

‘To drive a cab back then, you either had to have a death wish or come to the job with a biography that insured you to the danger or graced you with such intuitive empathy and curiosity that to see and hear and sometimes engage with the cavalcade of humanity sliding in and out of your backseat trumped the nightly game of Russian roulette.’

Rodriguez says he was one of the few taxi drivers to routinely take passengers to all five boroughs of the city, as crime levels made it too dangerous to drive to some neighborhoods.

Many New Yorkers left, and the population fell from around 8 million in 1970 to 7 million a decade later.

The city was also going through a poverty crisis and unemployment hit 12% in 1975.

In one picture, Rodriguez captured a man holding a cardboard sign that read, ‘Sometimes I’m hungry, sometimes I’m not, but all the change can help out a lot.’

Rodriguez has won many plaudits for his photography work and exhibited everywhere from Sweden to Cuba. He now teaches photography at New York University.

Taxi: Journey Through My Windows 1977 – 1987 by Joseph Rodriguez and Robert Price is available to buy from powerHouse Books.