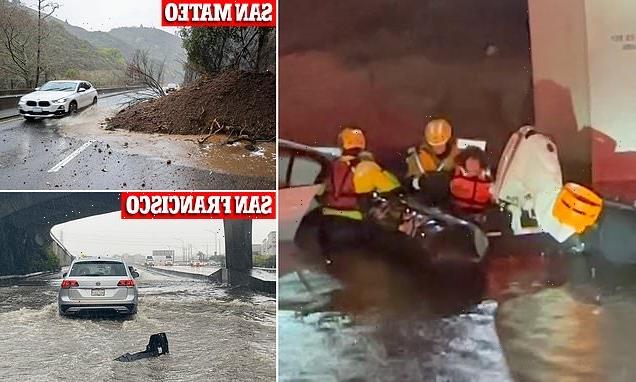 This is the dramatic moment California firefighters rescued a group of people from a car trapped in floodwaters.

The clip, shared by the Orange County Fire Authority, showed one adult who was sitting on a car rescued and four adults inside a car rescued while waiting on an off-ramp to Highway 55.

In total, five people were rescued and transported from the scene in Tustin.

The save comes as California continued to see severe weather, including some of the heaviest rainfall totals the Golden State has had in nearly 200 years.

San Francisco was lashed with the second heaviest rainfall it has seen in 174 years – since 1849. 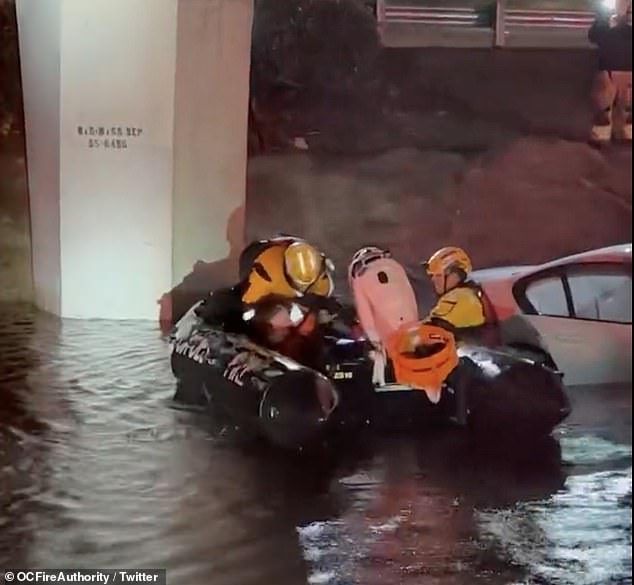 In video from Saturday’s rescue, crews from the City of Tustin’s fire department and the Orange County Fire Authority can be seen rowing in a rescue boat to stranded vehicles.

The group of rescuers pull passengers into the boat as rain pounds down.

‘OCFA technical rescue truck FF’s rowed a rescue boat out to bring 3 of them to safety after 2 walked out on their own. All 5 were assessed by FFPM’s & were uninjured,’ the Orange County Fire Authority said in a tweet.

Four of the individuals were transported to their nearby home by an ambulance.

Orange County officials thanked California Highway Patrol and the California Department of Transportation for their help in the assist.

While the rain in SoCal has been welcomed after months of drought-like conditions, the weather has also caused major issues statewide, specifically in Northern California. 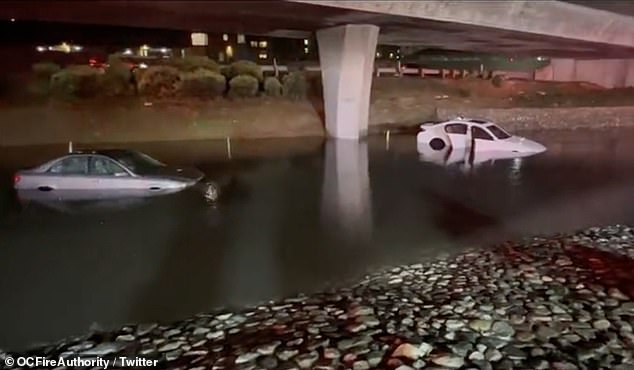 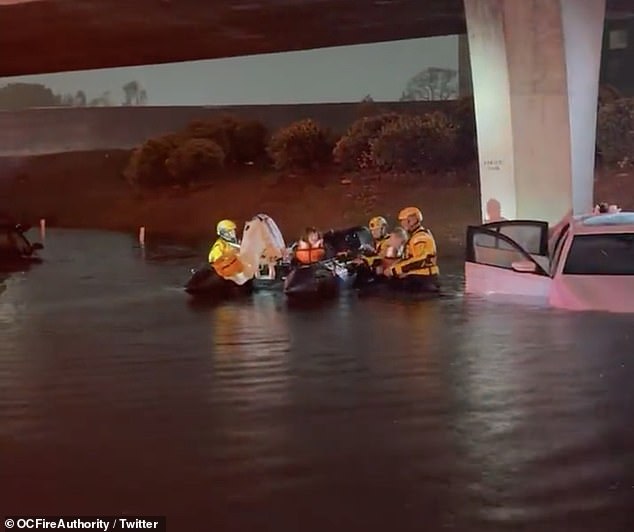 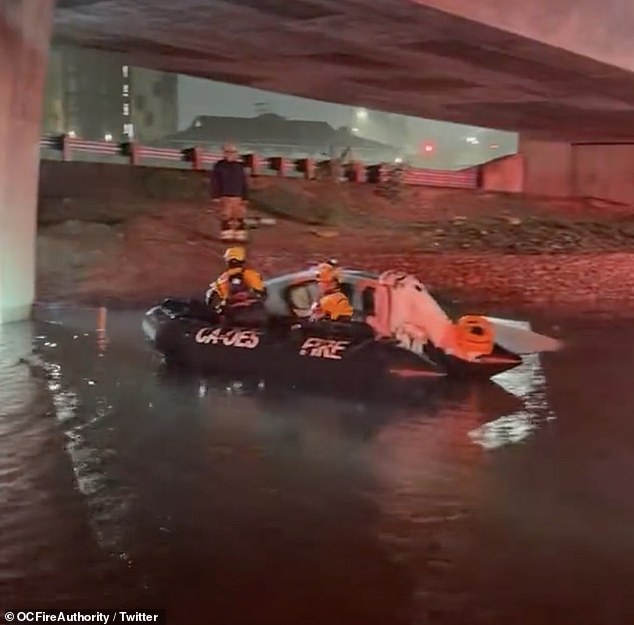 The cars were stuck on an off-ramp to Highway 55 in Orange County, California

The rainfall from Friday to Saturday made up nearly 47 percent of San Francisco’s total rainfall for all of December.

Highway 101 which connects San Francisco to the Peninsula was shutdown for flooding for much of the day Saturday.

Oakland reported its wettest day in history on Sunday with 4.75 inches of rain in a 24-hour period.

The previous record had been set in January 1982, according to the National Weather Service.

One clip shows a rescuer standing on a completely submerged vehicle helicopters fly overhead to look for stranded cars and individuals.

The rainfall contributed to the overflow of rivers, including the Cosumnes and Mokelumne, in the Sacramento area.

As of Sunday morning, Highway 99 was closed due to the ongoing flooding and overflow from the rivers.

‘SR-99 north and south will be closed with no estimated time of opening due to flooding from the Cosumnes River. Avoid traveling anywhere near the surrounding areas of Wilton, Herald and outlying region of Galt,’ the National Weather Service said.

Local officials declared a state of emergency and urged residents to consider evacuating.

In one community just east of San Francisco, local police came to the rescue of more than a dozen elderly individuals who needed assistance.

Officials have urged drivers to turn around if they come to flooded waters.

Sacramento firefighters over the weekend rescued teenagers from tree limbs after they became entrapped while driving through floodwaters.

The storm also knocked out power to more than 179,000 homes in California as of Sunday morning, according to poweroutage.us.

The situation is far from over, as well.

‘We are in for an extended wet pattern where these saturated soils won’t have time to really dry out,’ the National Weather Service said.

‘The only break we get from rain will happen on Jan 1, but then more rain occur Jan 2-5 with a third moderate atmospheric river moving into our region around Jan 4-5.’

The category 3 atmospheric river that struck the Central Coast of California earlier this week, flooded the Bay Area communities well into Sunday.

The National Weather Service had issued a flood advisory for the Bay Area that started Tuesday morning.

One Northern California meteorologist described the system as a ‘parade of storms.’