Toronto: A high school student in Canada has been diagnosed with a severe respiratory illness related to vaping, officials said, in what's believed to be the first reported case in the country.

Dr Christopher Mackie, medical officer of health and chief executive of the Middlesex-London Health Unit in London, Ontario, said the youth was on life support at one point but has since recovered and is at home.

"The only issued that was identified was that the individual vaped e-cigarettes," Mackie said. "As far as we are aware this is first case of vaping related illness that's been reported in Canada." 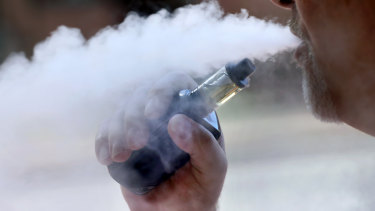 India banned the production, import and sale of electronic cigarettes on Wednesday.Credit:AP

Health officials in the United States are investigating a mysterious surge of severe breathing illnesses and deaths linked to vaping. They have identified 380 confirmed and probable cases in 36 states and one territory, including six deaths.

Mackie said the student had been using electronic cigarettes daily. He said officials know the brand used and whether they were using cannabis, but he declined to release those details. He added that no particular brand has been implicated in other cases elsewhere.

Health Canada issued a warning recently urging people who vape to watch for symptoms such as a cough, shortness of breath and chest pain. 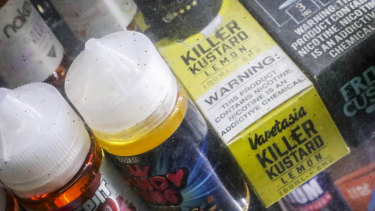 Flavoured vaping products are shown in a window display at a shop in New York in last week. The city has now banned flavoured e-cigarettes.Credit:AP

It also said that healthcare professionals should ask patients about their use of e-cigarette products if they have respiratory symptoms.

"It's important that people understand that vaping does create health risks here in Canada as well," Mackie said.

But he said more information needs to be collected before a potential ban is considered.

Canadian Health Minister Ginette Petitpas Taylor said officials were not talking about banning vaping at this point but said they are considering banning certain flavours. She said they wanted to step up regulations so that vaping is not appealing to youth.

US doctors say the illnesses appear to be a response to the inhalation of a caustic substance. Symptoms have included shortness of breath, fatigue, chest pain, diarrhoea and vomiting.

Many stricken adolescents and young adults, previously healthy, have required machines to help them breathe. The six deaths that have been reported have all adults and at least some with pre-existing lung problems or other conditions that may have made them more susceptible.

No cause has been established, but some researchers suspect vitamin E acetate, which recently has been used as a thickener, particularly in black-market vape cartridges. Suppliers say it dilutes vape oils without making them look watery. Inhaling oily vitamin E droplets into the lungs can trigger pneumonia.

On Wednesday, India announced a ban on the production, import and sale of electronic cigarettes. The ban will be imposed through an executive order and will include jail terms of up to three years for offenders. The Health Ministry, which proposed the ban, had said it was needed to ensure e-cigarettes didn't become an "epidemic" among children and young adults.