Listvyanka, Russia: When Andrei Sukhanov saw that the Chinese-owned hotel rising next door was about to obstruct the sweeping view of Lake Baikal from his small, rustic motel, he steeled himself with a shot of vodka, grabbed his chainsaw and chopped down eight wooden pillars buttressing the construction.

Nothing fell down and far from being condemned Sukhanov was treated as a hero for standing up to the Chinese, whose expanding presence around Lake Baikal is the source of deep resentment. His actions have become a rallying cry amid a growing stream of petitions, protests and court cases aimed at blocking the Chinese around the lake and surrounding areas. 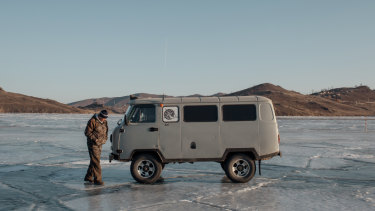 "If we let them, the Chinese will take over," said Sukhanov, 57, who fled St Petersburg decades ago for a bucolic life by the Siberian lake, the world's largest, deepest body of fresh water. "They will just steal all the money and the local people will get nothing."

Russian President Vladimir Putin pivoted toward China five years ago, after the annexation of Crimea soured relations with the West. China became Russia's new best friend, allied through trade, diplomacy and even military co-operation to counter US influence globally.

Yet, this supposed new era of Sino-Russian friendship is exhibiting pronounced strains in Listvyanka, an old resort town on the lake, as an influx of Chinese tourists and businesses stirs recurrent Russian fears of a Chinese land grab and raises concerns about polluting the lake.

At the same time, local authorities see in the flood of visitors the best hope they have for new jobs and economic development in an impoverished region. 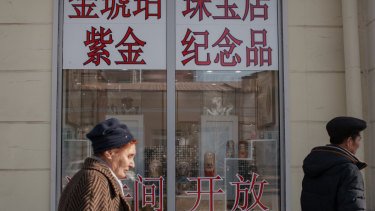 Pedestrians walk in front of a jewellery shop adorned with signs in Chinese, in Irkutsk, RussiaCredit:Emile Ducke/The New York Times

More than 1.6 million tourists, mostly Russians, visited the region last year, according to the Irkutsk Tourism Agency. The 186,200 Chinese were the largest foreign group.

The number of Chinese jumped 37 per cent over the previous year and the surge is expected to continue as Beijing is just a two-hour flight away, versus six hours to Moscow, 4345 kilometres west.

"People understand that China is a much more powerful country and its economy is producing numbers that Russia cannot hope to achieve," said Yuri Pronin, editor of Baikalskiye Vesti, an independent weekly published in Irkutsk, the regional capital. "We feel this breath."

Many Russians say Lake Baikal, which holds nearly 20 per cent of the Earth's fresh surface water, is under siege. 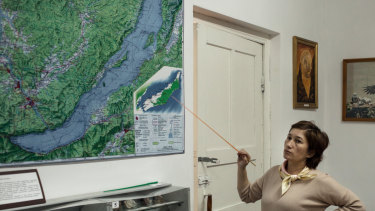 Yulia Mushinskaya, the director of the local museum in Khuzhir on Olkhon Island, Russia, with a map of Lake Baikal.Credit:Emile Ducke/The New York Times

Framed by pine forests and distant mountain peaks, the picturesque lake draws visitors both summer and winter, when even trucks can navigate across its thick, intensely blue ice.

But Listvyanka's rudimentary infrastructure cannot cope with the sewage and trash generated by the current number of visitors, and residents shudder at the thought of tens of thousands of more Chinese.

Local authorities have dragged into court the owners of at least 10 hotels constructed with Chinese financing, accusing them of building illegally on plots designated for single-family homes or other infractions.

A district court ordered two hotels demolished earlier this year and eight others are likely to face the same fate. 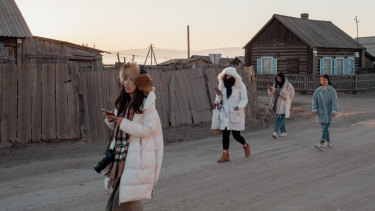 The Chinese stand accused of not only running roughshod over local residents, but also of trying to siphon off the water itself.

This winter, the construction of a new bottling plant to export water to China from a village near Listvyanka prompted more than 1.1 million Russians nationwide to sign an online petition denouncing it.

A district court in Irkutsk cited environmental concerns in halting the construction of the plant in March. 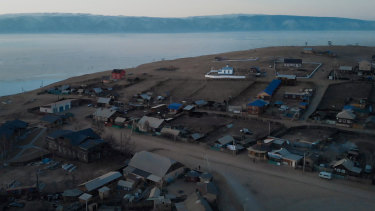 What may rankle the most, local people say, is that the Chinese are not paying business taxes.

"They do not pay us a kopeck," Sukhanov growled. "If they paid the 20 per cent required to the local budget, we would get the infrastructure and the schools that we need."

Caught in the middle between the Chinese business interests and local residents is Aleksandr  Shamsudinov, mayor of Listvyanka, population 2122.

Shamsudinov spent much of 2018 under house arrest, accused of exceeding his authority by issuing housing permits for single-family plots in the village. Many of those plots soon mushroomed into illegal guesthouses for Chinese tourists. 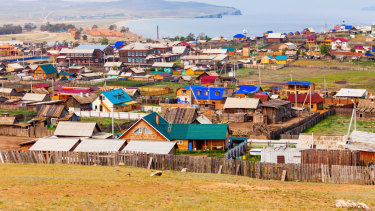 The character of the neighbourhoods around the lake is changing.Credit:Shutterstock

"They all said we need big houses, we have a lot of relatives who are planning to come visit," he said.

With the construction, the character of the village began changing as quaint blue wooden cottages with white gingerbread trim were obliterated. Huge billboards, some in Chinese, advertised venues like the Las Vegas Strip Club.

The town has no central water or sewage system. Litter piles up, side roads remain unpaved and one main kindergarten is an old wooden barracks lacking indoor plumbing.

Marina Rikhvanova, an environmentalist, said she no longer drank lake water near any hamlet. Pollutants seeping into the lake cause algae blooms.

"It's a microbe cocktail," she said. 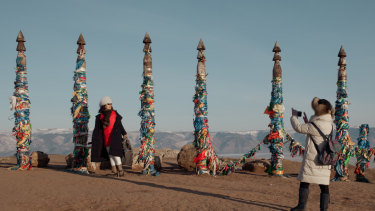 The mayor, a retired police officer, said the federal government should have a development plan that balances the needs of visitors and residents.

"Everybody shouts that Baikal is the pearl of Russia and a UNESCO World Heritage site, but getting rid of the garbage and other environmental issues are left on the backs of the small-town mayors," Shamsudinov said.

Further north, Olkhon Island also attracts tourists. Yelena Kopylova has been taking in guests for some 25 years, expanding from one bedroom in her house to 10 buildings with a total of 32 rooms.

Her hotel, fully booked for the summer, accepts only Chinese groups that hire a Russian guide and local vehicles.

"This is the main source of income for young families," Kopylova said, adding, "We have to defend the interests of our local people."

Locals often grumble that the Chinese refer to Lake Baikal as the Northern Sea, its ancient Han name. Some are convinced that Beijing is secretly plotting to reclaim the lake and the huge, sparsely populated areas beyond, ceded to the Russian Empire in an 1858 treaty that China has long considered unfair.

For years, the only Chinese in the area were poor vendors selling cheap goods in the Shanghai Market in Irkutsk. Now, the sight of Chinese tourists tossing wads of roubles around points to how China has surpassed Russia.

The influx revived Karl Marx Street, Irkutsk's once-derelict main shopping thoroughfare, where one jeweller is selling a gold and amber necklace for more than $US6500 ($9200). A sign in Chinese promises a gift to anyone who spends more than $US1200.

The Chinese tourists themselves, mostly oblivious to the grumblings, delight in Lake Baikal.

Recently, a honeymooning couple from southern China, snacking on lake fish bought at a small outdoor market, happily declared that they had never felt so cold.

Asked why they came, the couple used a smartphone to play a hit Chinese pop song On the Shore of Lake Baikal, about taking your love to the lake. It has inspired countless visits.

A Chinese-born businessman, Alexei Dzhao, 37, and a Russian citizen, sings a different tune.

Last year he built two large houses in the woods above Listvyanka. His Baikal Seal Guest House was originally meant to be a private home, he said.

It is a pleasant complex with whimsical birdhouses nailed to the surrounding trees and cozy, pine-lined rooms.

Dzhao said he would do anything to legalise the place, but his building permit was revoked and he expects a demolition order. Many Chinese owners are hoping to sell before the bulldozers arrive.

"Things are not calm in Listvyanka," said Dzhao, who plans to move to Moscow. "There is all this nationalistic tension."

05/05/2019 World News Comments Off on Chinese are flocking to Russia’s Lake Baikal, prompting fears of a land grab
Lifestyle