‘Once I go back, I will be dead’: Spy who has revealed China’s espionage here and in other countries and has defected to Australia fears he will be killed if he returns home to his family 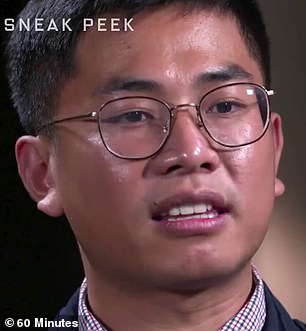 Wang ‘William’ Liqiang, 27, served as a Chinese intelligence operative since 2014, before defecting to Australia earlier this year

A high-ranking Chinese spy who has defected to Australia has shed light on China’s extraordinary efforts to interfere in foreign governments.

Wang ‘William’ Liqiang served as one of the Chinese Communist Party’s (CCP) intelligence operatives, playing a key role in the country’s influence over Hong Kongese and Taiwanese politics since 2014.

In an interview with The Age, Liqiang, 27, revealed how he was a part of a highly-elaborate scheme to fight pro-democracy movements, infiltrating local media and even student networks.

He also admitted to meeting with the head of a spy ring allegedly operating in Australia.

Liqiang described in detail how he targeted organisations at universities in Hong Kong, luring students with opportunities and ‘petty favours’ in exchange for their work.

‘I exchanged ideas with them and learnt about their thinking, then I influenced them with patriotism, guiding them to love the country, love the Party and our leaders, and fight back strongly against those independence and democracy activists in Hong Kong,’ he said.

Liqiang’s efforts would effectively help China maintain a strong political grip in the sovereign states where pro-democracy movements are on the rise.

As tensions between China and Hong Kong flared, he ‘silenced’ dissidents by using students who pretended to support Hong Kong independence to obtain their information before ‘verbally’ attacking them.

The spy operation also ensured all bases were covered by maintaining some level of influence in the media by appointing pro-CCP figures at news outlets.

In Taiwan, which had been preparing for an election last year, Liqiang described building a ‘cyber army’ of students in order to sway political opinion in their favour, as well as censoring news. 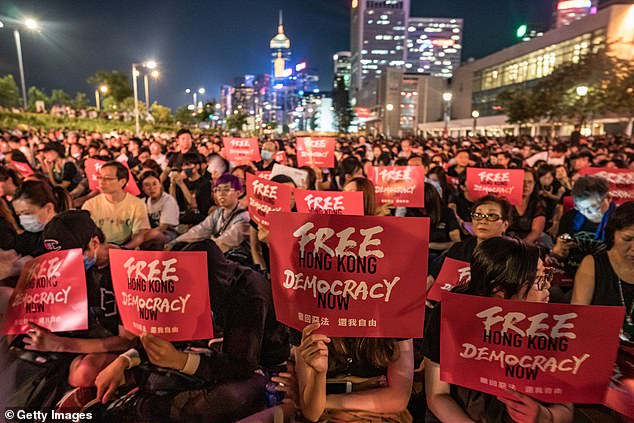 The Chinese spy was a part of a highly-elaborate scheme to fight pro-democracy movements, in Taiwan and Hong Kong, filtrating local media and even student networks. Pictured  protesters rally against the extradition bill in Hong Kong in June 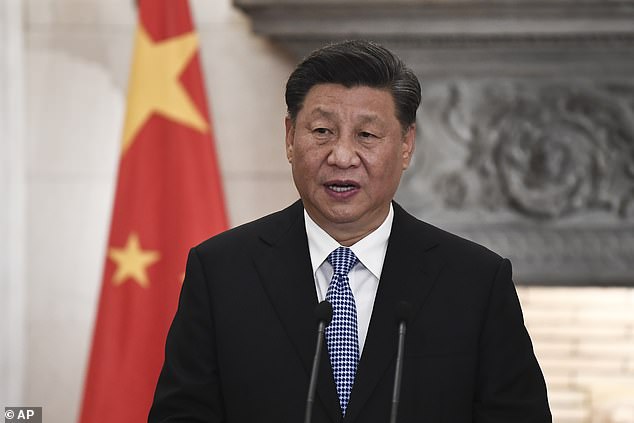 Since coming to power, President Xi Jinping has invested heavily in the People’s Liberation Army Navy in a bid to project Chinese influence across the Pacific and beyond

‘If we wanted to attack someone, we could instantly collapse their Facebook’, he said, explaining they used fake IP addresses to pump out anti-democracy messages.

At the time, he believed he was doing a service to his country as a patriot, as opposed to being a spy, he said.

His five-year stint working for one of the world’s most powerful regimes came to an end after he was ordered to give up his identity to work as a spy in Taiwan ahead of its 2020 election.

Liqiang had grappled with the idea of devoting his life to espionage work after arriving in Sydney earlier this year to visit his son and wife, who is studying at university. 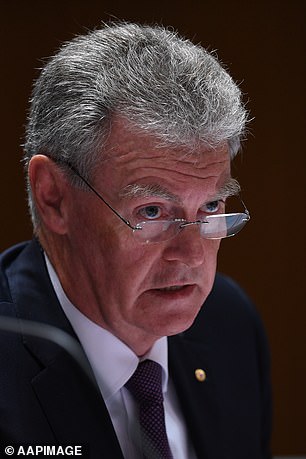 Months into his trip, he decided to meet with a member of the Australian Security Intelligence Organisation (ASIO).

Since then, Liqiang has passed on undisclosed information to ASIO, but admitted his defection means he will have to live in fear of retribution from his native country for the rest of his life.

‘I know very well that the Chinese Communist Party can never be trusted. Once I go back, I will be dead,’ he said.

Since coming to power, President Xi Jinping has invested heavily in the People’s Liberation Army Navy in a bid to project Chinese influence across the Pacific and beyond.

The defector’s bombshell interview, which will air on 60 Minutes on Sunday, comes a day after retired ASIO chief Duncan Lewis accused the Chinese government of using ‘insidious’ foreign interference operations to ‘take over’ Australia’s political system.

Anyone in political office could be a target, the former spy chief told the political journal Quarterly Essay in an interview to be published next week.

Mr Lewis claimed Chinese authorities were trying to ‘place themselves in a position of advantage’ by in political, social, business and media circles, The Sydney Morning Herald reported on Friday, citing the interview.

‘Espionage and foreign interference is insidious. Its effects might not present for decades and by that time it’s too late,’ he said.

‘You wake up one day and find decisions made in our country that are not in the interests of our country.’

In the interview, Mr Lewis warns covert foreign intrusion into the heart of Australian politics is ‘something we need to be very, very careful about’.

His remarks come after Liberal MPs Andrew Hastie and Senator James Paterson were denied visas to travel to China for a study tour after they criticised its human rights record.

In an opinion piece published in The Australian on Thursday, senior Chinese diplomat Wang Xining accused the MPs of having double standards and showing disrespect.

‘It is cynical that in a country boasting freedom of speech, different views from another nation are constantly and intentionally obliterated,’ Mr Wang wrote.

Mr Lewis retired in September after five years as the head of the Australian Security Intelligence Organisation. 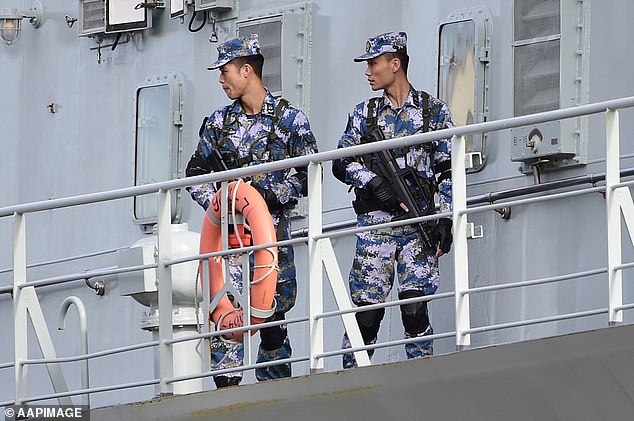 More than 700 Chinese navy sailors, including some armed with guns (pictured), travelled to Sydney in June for what Prime Minister Scott Morrison has described as a reciprocal visit

In October, a Four Corners investigation lifted the lid on dubious relationships between a number of Beijing-backed entities and Australia’s top tertiary institutions.

The program revealed a University of Queensland professor who received $2.6million in taxpayer-funded grants used the money to set up a tech company in China which monitored members of the Uyghur minority group.

China analyst Alex Joske from the Australian Strategic Policy Institute warned our institutions are being infiltrated by China-owned or backed entities, and singled out UQ for its ‘concerning activity’.

‘[The university] engages in particularly high levels of collaboration, some of which has raised serious human rights concerns,’ Mr Joske told Four Corners.

He said the university, which receives defence funding for its artificial intelligence programs, trained a Chinese PhD student working on drone swarms.

In July, a flotilla of three Chinese warships with 700 sailors on board arrived a for a secret visit to Sydney.

Sailors were lined up on the ships in combat uniform, with some carrying guns. 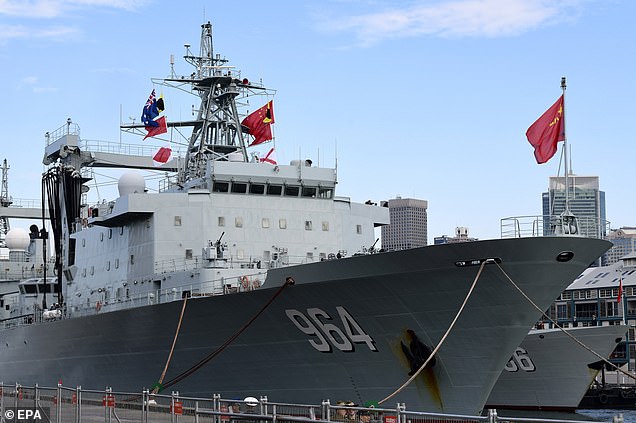 The ship arrived on a ‘secret visit’, amid heightened concern about Beijing’s growing clout and military muscle flexing