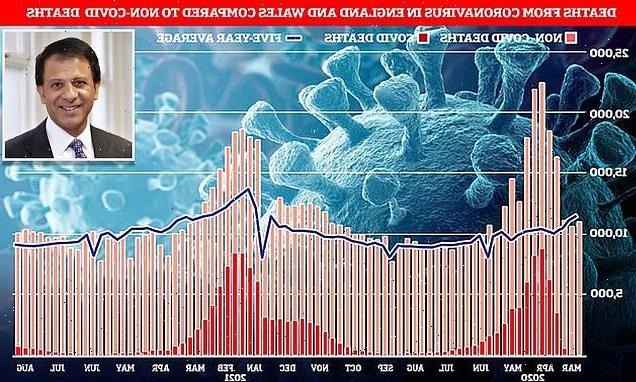 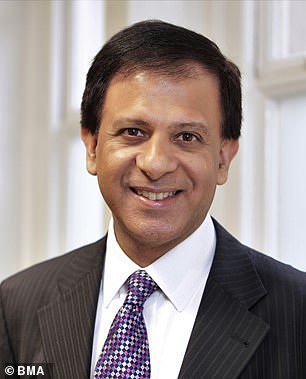 ‘We will not accept an NHS unprepared for a pandemic, without vital PPE to protect the health and lives of health and care workers,’ Dr Chaand Nagpaul will say today

Chronic neglect of the NHS and a lack of preparedness before the Covid pandemic struck added to the UK’s Covid death toll, the British Medical Association chair will say today.

Britain has recorded more than 130,000 coronavirus-related fatalities, giving it one of the worst death tolls in the western world.

The health service was ‘patently’ under-staffed and under-resourced and ‘unprepared for a pandemic’, while the Government has been ‘consistent only in its inconsistency’.

In a speech at the BMA’s virtual annual representative meeting later, he will say that the deaths occurred against a backdrop of an NHS that was inadequately resourced and not ready for a virus outbreak.

This included too few beds, a lack of PPE and staff, as well as an insufficient testing capacity.

The UK has seen 134,200 people die within 28 days of testing positive for Covid, the latest official daily figures show.

Meanwhile, separate surveillance figures show the coronavirus has been mentioned on nearly 160,000 death certificates since the pandemic struck.

Some 4,000 deaths alone can be linked with the ‘gamble’ of July 19’s Freedom Day on July 19 — when nearly all remaining Covid restrictions were eased in England.

It comes as the NHS waiting list for routine operations, such as routine hip and knee replacements, hit 5.6million in July — the most since records began in 2007 — after the number rose continuously during the pandemic.

Health Secretary Sajid Javid had warned the figure could hit 13million by the end of the year without immediate action.

No10 announced a massive £36bn for the NHS and social care to fund nine million more checks, scans and procedures by the end of 2025, as part of the ‘biggest catch-up programme in the health service’s history’.

NHS bosses warned the cash will not be enough to clear the backlog, while critics said the extra funding — on the top of the NHS’s annual budget — will be ‘gobbled up’ by the health service. 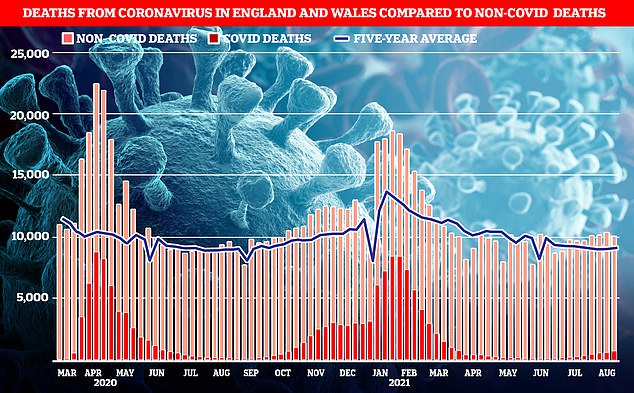 Some 10,268 deaths from all causes were recorded in England and Wales in the week ending August 27, according to the Office for National Statistics. Covid was linked to 668 fatalities (red bar), meaning 9,600 were not related to the virus (pink bar). The death numbers for the most recent week are 12.1 per cent higher than the five-year average for this time of year (blue line). The 668 Covid fatality figure is the highest recorded since March 26, when 719 deaths were recorded. Deaths dropped as low as 84 in the week to June 11. There were more than 8,000 weekly Covid deaths at the peak of the second wave in January 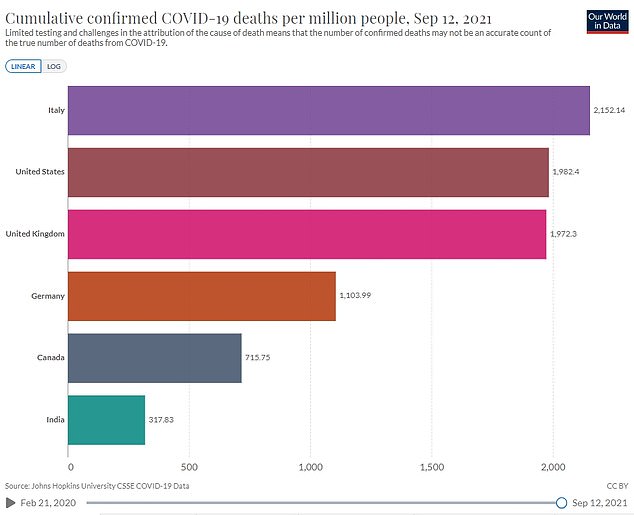 Dr Nagpaul, who is also a GP in North London, is set to say: ‘We will not accept a return the old pre-pandemic NHS, which was so patently under-staffed and under-resourced, where nine in 10 doctors are afraid of medical errors daily.

‘We will not accept an NHS running at unsafe bed occupancy and without spare capacity.

One in ten people in England are stuck on the NHS waiting list for routine operations, extraordinary figures revealed last week as queues hit another record high.

Latest NHS data showed that 5.6million people across the country were waiting for elective surgery in July — the most since records began in 2007 — after the number rose continuously during the pandemic.

Waiting lists spiralled after Covid forced hospitals to cancel routine operations and turn over whole wards to patients suffering from the disease. Social distancing and extra Covid precautions have made it even harder to start chipping away at the record waiting lists.

Record numbers of patients are now turning to private health rather than waiting for help from the NHS, figures show, with one private provider seeing patient numbers rise by 80 per cent on the back of the pandemic.

The waiting list includes people waiting for operations like knee, hip and joint replacements, as well as cataracts surgery.

The number who’ve waited more than a year to start treatment stood at 293,000 last month, almost three times as high as the same time last year when 83,000 had been on the list for this long.

And more than 1.7million people have been waiting more than 18 weeks for surgery, outside the period in which the NHS aims to see every patient.

The Royal College of Surgeons said behind these ‘eye-watering’ statistics were patients ‘waiting in pain’ that was leaving them unable to work or carry on with their daily lives. Top medics said the NHS was already ‘running on empty’ as it heads into winter which is its busiest period.

‘We will not accept an NHS unprepared for a pandemic, without vital PPE to protect the health and lives of health and care workers.

‘We will not accept an NHS in crisis every summer, let alone every winter.

‘We will not accept a nation bereft of public health staff, facilities and testing capacity, with ministers then paying billions to private companies who were unable to deliver.’

NHS England data shows one in 10 nursing roles were vacant by the end of June.

And 84 per cent of beds were occupied on average in the first quarter of the year.

Some hospitals were so overwhelmed at various points throughout the pandemic that they were forced to cancel routine operations.

And there was huge PPE shortages at the beginning of the Covid pandemic, with insufficient stocks across the UK, some of which was out of date.

And contracts worth billions of pounds were given to private companies — largely without a competitive bidding process to secure the best price.

‘The sad truth is that many of these infections could undoubtedly have been prevented through simple mandatory measures… Wearing a mask does not stop you buying a pint of milk or getting on a train.’

He will accuse the government of being ‘consistent only in its inconsistency’.

‘When cases soared in June the Prime Minister announced there was “nothing in the data to delay ending all restrictions” — only to U-turn days later based on the exact same data.’

He also has concerns about how far the £36billion additional funding for the NHS and social care will stretch, as it continues to deal with the pandemic and a backlog of cases

The Government plans to raise £12billion extra a year for the NHS and adult social care through a 1.25 per cent rise in national insurance next spring.

The NHS will get most of the share for the first three years, with £5.3billion allocated to social care, £500million of which will be spent on workforce training and recruitment.

Ministers say social care will get more money after the first three years, as an £86,000 cap on the costs an individual will pay for social care in their lifetime comes into force in October 2023 and requires funding.

A Department of Health and Social Care spokesman said: ‘We have backed the health service at every turn, with an extra £29billion to support health and care services on top of our historic settlement for the NHS in 2018. 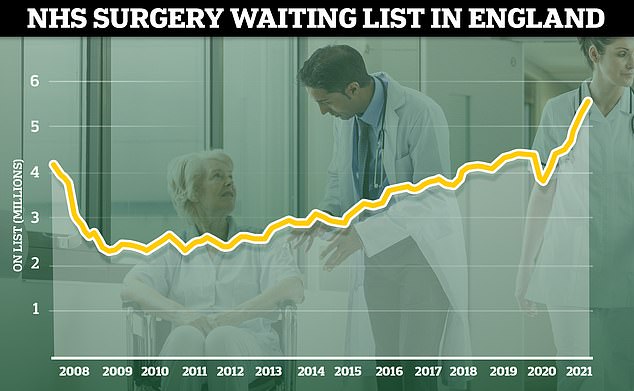 The number of patients waiting for routine hospital treatment hit 5.6million in July, the highest figure since records began in 2007. And health chiefs have warned the backlog is going to get much worse before it gets better, with projections that it could soar up to 13million by the end of the year if no action is taken 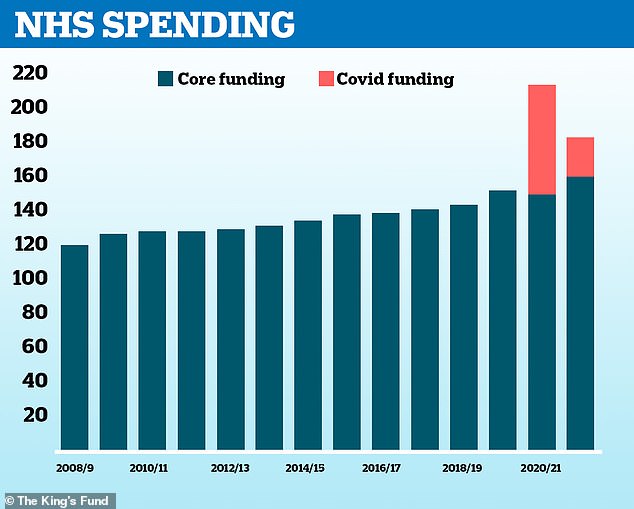 The health and social care budget reached £212.1million in 2020, according to the King’s Fund. Some £148.7million of the sum was planned funding, while the remaining £63.4million was dished out to cope with the Covid crisis. For the second half of 2021 and first half of 2022, minister plan to spend a total of £181.4million on the health service, £22.4million of which will be linked to Covid recovery

‘At the same time, we are backing the NHS with a further £36billion for health and social care and a ring-fenced £8billion to tackle backlogs and help the NHS deliver an extra nine million checks, scans and operations for patients across the country.’

The Institute for Fiscal Studies says the extra cash will equate to a 3.9 per cent rise in the NHS’s budget by 2025, compared to funding it received in 2019.

It comes as Boris Johnson is set to reveal at a press conference tomorrow a winter roadmap to manage an expected surge in cases, hospitalisation and deaths.

He is expected to say booster doses for the elderly and most vulnerable, along with vaccines for healthy 12 to 15-year-olds, will help the country avoid future lockdowns.

The Government’s power to impose lockdowns is expected to be scrapped, along with the travel traffic light system and mandatory Covid tests for UK arrivals.

But the Prime Minister is expected to say masks may become mandatory and people may be told to work from home if the NHS begins to buckle.