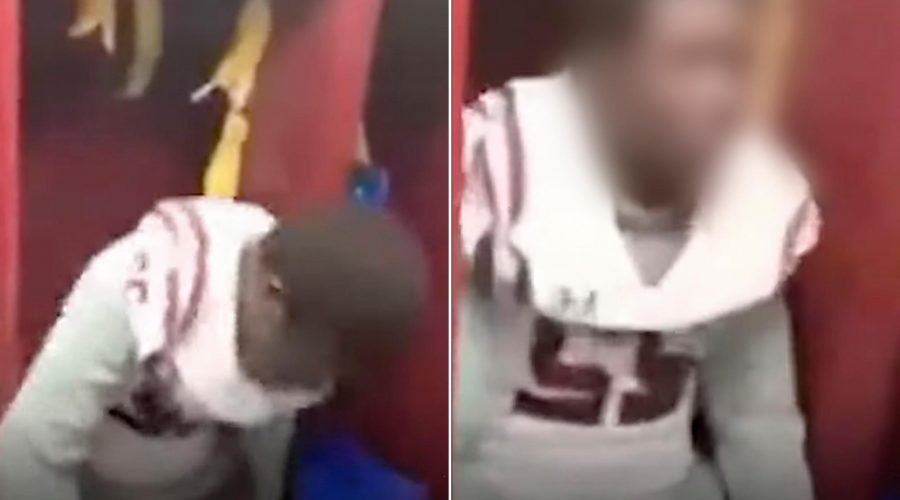 He still has Apu-logies to make: Hank Azaria remains in sorry state over ‘Simpsons’ character

How did it become normal for every police shooting to bring ruinous rioting?

A black football player at an Illinois high school was forced to sit in a locker room littered with banana peels — as another student threatened to “break” his knees if he didn’t comply, video shows.

The Moline High School student, who was not identified because he’s a minor, was filmed in the 11-second video that captured what authorities have called a “disturbing racist scene” last Thursday.

In the clip, another player, whose hand can be seen but face doesn’t come into view, threatens the black player to sit in the locker “or I’ll break both your knees.”

When the player sits down, others can be heard shouting, “Yeah!”

In a statement released Monday, the student said the other players have apologized to him and he’s “fine,” news station KWQC-TV reported.

“I love the football team I’m on and they’re good guys. I know that personally. I talked to the people involved individually and they apologized. We had a heartfelt talk about it and I told them how I felt. So please don’t harass, bully, or threaten them at all,” he said.

He added that his primary concern was “to get my life back together, and my student-athlete life back on track.”

“I want to make it known that I’m fine. Everyone is worried about me and showing concern for me and I really appreciate it,” he said.

Moline Police Chief Darren Gault previously said the department had launched an investigation into the incident.

Gault said the teammates involved are “of both different and similar races to the victim.”

“Regardless of these facts, we all agree that this is a disgusting way to treat a fellow teammate, a fellow human being and most certainly a friend,” Gault said.

The force’s findings were turned over to the Rock Island County State’s Attorney Dora Villarreal, who called for people to stop sharing the video on social media and respect the student’s privacy.

The student has also asked that the public move on and “please stop talking about the incident and video.”

“I understand everyone wants justice for me and they want what they think is right to be done, but I already made my feelings known to the police and my friends about how I feel about everything,” he said.