Coroner rules schoolboy, 15, lied about ‘suicide pact’ he discussed with his best friend before the 14-year-old jumped in front of a train

A coroner today ruled that a schoolboy had been dishonest in his evidence about the final moments of his best friend, who he allegedly discussed a ‘suicide pact’ with before the teenager jumped to his death in front of a train.

Richard Travers said the reasons Sam Connor, 14, leapt in front of a train following a suspected ‘suicide pact’ with his friend would never be known due to the ‘absence of an honest account’ from the teenager.

The coroner had twice asked the schoolboy, 15, to tell the inquest the content of Sam’s final conversation with him but the witness insisted he could not remember.

The hearing previously heard how Sam had asked another classmate if a train would go fast enough to kill him just hours before he leapt off a station platform, after receiving a ‘negative’ school report.

He had even texted a girl who he had a romantic crush on, saying: ‘I’m going for a while, don’t forget me.’ 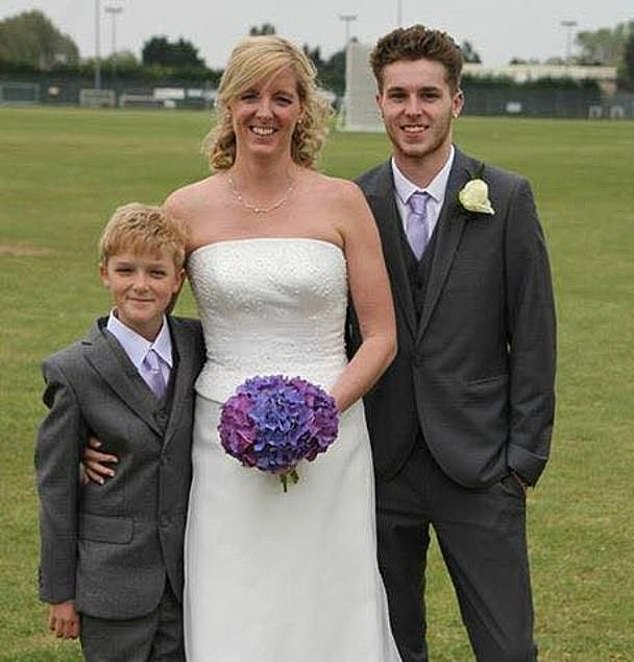 Sam Connor, 14 (pictured left with his mother Christine and his brother James) died when he jumped in front on a train at Chertsey railway station in front of classmates 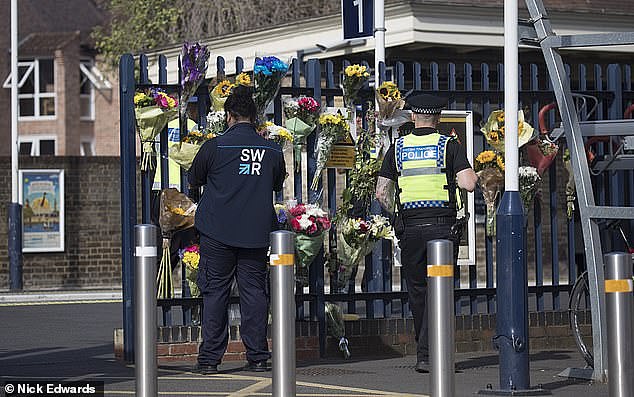 Richard Travers said the reasons Sam leapt in front of a train following a suspected ‘suicide pact’ with his friend would never be known due to the ‘absence of an honest account’ from his close friend. Pictured: The scene at Chertsey Railway Station in July 2019

The inquest in Woking, Surrey heard that while Sam was standing close to the edge of the platform, another pupil called out ‘Don’t do it!’ as a common joke which the pupils shared when someone was standing over the yellow line.

A camera which captured the train driver’s point of view showed Sam step out into mid-air and fall onto the track furthest from him at 4pm, where he died of a laceration to the neck, a pathologist said.

The inquest heard how earlier in the day of Sam’s death, he and the witness – who cannot be named for legal reasons – had discussed a suspected ‘suicide pact.’

Later, Sam stepped out ‘calmly and deliberately’ into the path of an oncoming train.

His close friend stepped back from the platform edge and ran to the other end of the station, the coroner was told.

Mr Travers today recorded a narrative conclusion ‘in the absence of an honest account’ from the schoolboy. 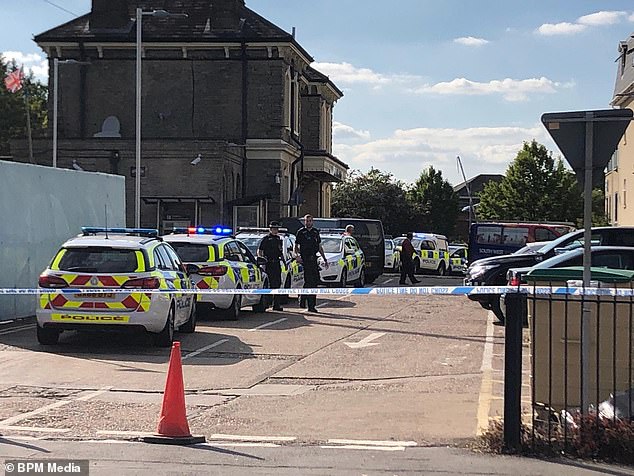 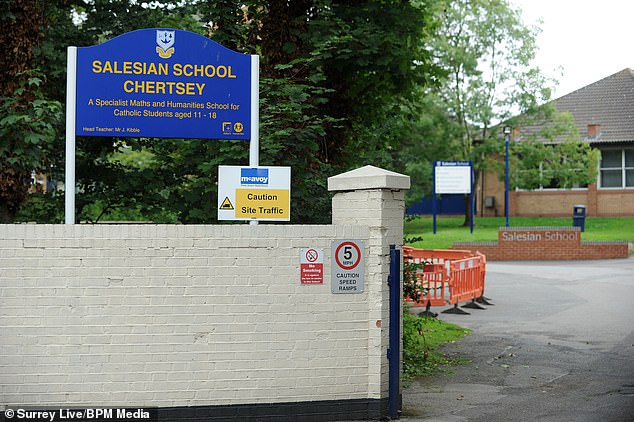 He told how Sam, a breakdancing enthusiast who also loved playing video games on his Playstation, was the youngest of three children in a happy and loving family.

‘It is quite clear to me that he was very popular with his peers’, Mr Travers added.

‘By the summer of 2019 I find Sam appeared to his family and to his teachers to be a generally happy 14-year-old.

‘There is some evidence that on occasions he was moody at home, especially in response to the usual parental boundaries.

‘What is striking and unusual is what a number of Sam’s friends report, namely that Sam often spoke about death and suicide and sometimes about killing himself.

‘It is not apparent from the evidence what triggered this line of thinking.’ 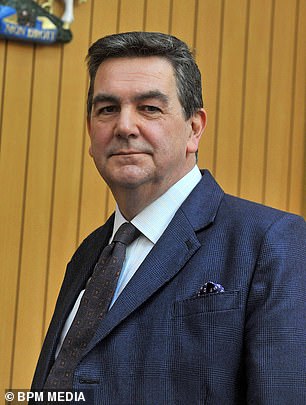 The inquest had heard from pupils at the Salesian School in Chertsey, Surrey, who told how Sam would often make comments which appeared to be jokes about taking his own life.

One boy, who had been in a class with Sam on the morning of his death in July last year, said: ‘During the lesson, Sam was slouching as he usually did. He told me that he wanted to commit suicide.

‘I cannot remember his exact words but he either said “I want to” or “I am going to”.

‘He was going into far more detail than usual, talking about the station and jumping in front of a train.

‘He asked me if I thought the train would be going fast enough to kill him. Sam has said similar things in the past but I always thought that they were throwaway comments.’

However, Mr Travers told the inquest that Sam had been looking forward to a summer holiday with his friends in Spain and had been heard speaking about his long-term plans.

The coroner said: ‘At some point that morning there was talk between Sam and his friend of a suicide pact. Sam had spoken of his suicide pact before.’

Mr Travers had questioned Sam’s close friend during the inquest, which had heard how the friend said he had discussed the suicide pact with Sam but was only ‘played along with it’, thinking it was a joke. 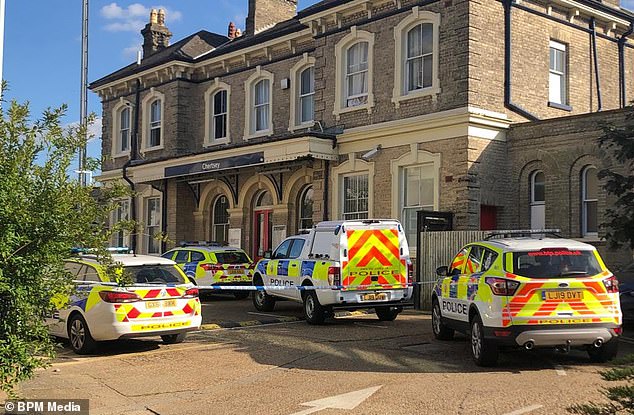 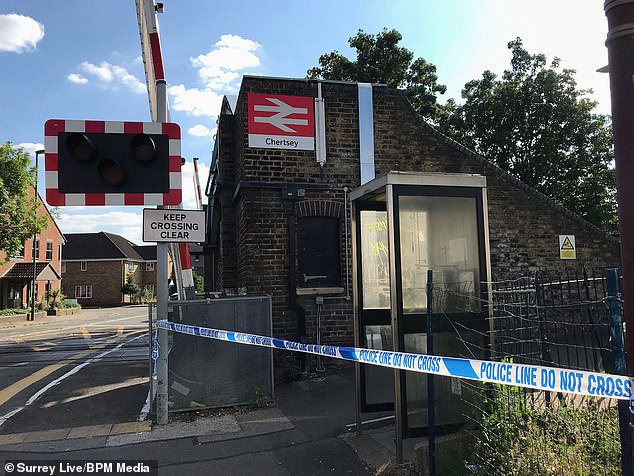 In an interview with British Transport Police shortly after Sam’s death, the friend had said: ‘I did not think he would do it because he had been telling me he was planning to take psychology for A levels and become a psychologist, so he was planning for the future.

‘Obviously he took committing suicide seriously but I did not think he thought that we would go through with it.’

CCTV footage captured the schoolboy walking and chatting with his friend towards the end of the a platform, where about 200 students had gathered to go home, the coroner was told.

Year 7 pupils who had been on the station platform said they had seen the two boys talking and whispering while looking down at the tracks, ‘as though something was about to happen’ on July 15 last year.

In a police interview, the teenage witness said he and Sam, who was from Ashford, Surrey, had walked down the platform without any real plan while listening to music on his phone.

When appearing as a witness at the inquest, he accepted this account was not correct.

Mr Travers said: ‘The friend’s evidence as to what was being said by him and Sam was of very real importance in this inquest.

‘I have to say I that I find it very hard to accept that he cannot remember what was being said and I have very real doubts that he was doing his best to tell me the truth.

‘It is very regrettable that in the absence of an honest account of the friend, I am left with no reliable evidence of what was in Sam’s mind when he jumped down onto the tracks.’

The coroner recorded a narrative conclusion which read: ‘Sam Connor died as a result of his own deliberate act but on the evidence available his intention could not be established.’