A COUPLE were left spooked after spotting a “ghost” in a picture taken in a cemetery late at night.

Szymon Cieslak, from Poland, took the snap while on a walk with wife Katarzyna in St Jude’s Cemetery in Surrey – but was left shocked when it revealed a strange shadowy figure. 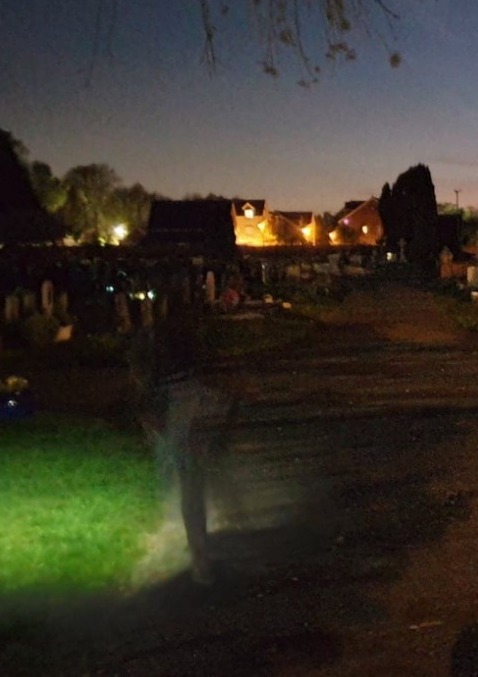 Building site manager Szymon was on a late night walk with hubby Katarzyna during lockdown in late April, and wandered into the cemetery in Egham, Surrey.

Katarzyna then spotted a child’s grave in the cemetery, and started to pray.

She told The Sun: “I saw a child’s grave and I started to pray for the little soul. I was thinking like a mother.”

Shortly after, Katarzyna left the spot and Szymon whipped his phone out to take a picture of the cemetery – which was totally empty under the moonlight.

After they took the picture at around 10pm, Kataryna said she “felt strange” – and told Szymon she wanted to go back home.

A few days after taking the snap, the couple, who live in Slough, noticed a spooky figure appear in the left of the picture when scrolling through photos on Szymon's phone.

Katarzyna said: “When I zoomed in I saw a face, like a child’s face.

Szymon was equally spooked out, adding: “I just thought to myself: 'Oh my god, I have no idea what that is'.

Szymon insists he’s not a believer in the paranormal – but that the spooky snap has made him “start to think” about the possibility of ghosts.

He said: “I don’t fully believe yet but I need to do more reading.

“I’ve never ever seen a ghost before.”

“But that’s what people say. When you start believing in ghosts you’re going to start seeing them!”.

Katarzyna said she was more prone to believing in ghosts, adding: “I believe in the supernatural as my grandma talked to me about her experiences when she was a little girl.

"But lots of people lie about it and there are lots of photoshopped pictures.

“So I don’t believe in everything”.

Paranormal experts disagreed on whether the image was a ghost – and raised the possibility that it could be a camera glitch or an optical illusion.

Jason Shiels, of Plymouth Paranormal Investigations, said it was “hard to tell” whether but there was “definitely something there”.

He told The Sun Online: “There is definitely something there.

“Just by looking at them on my phone I do see a face looking into the grave side on.

“I wouldn't say it was camera glare from the light myself due to the angle that the camera is facing.

There is definitely something there

“Again that light I don't personally think would interfere with the camera as it's not directly pointed in the cameras direction to cause any glare.”

But other experts were more skeptical.

Jessica Robson, from Wiltshire Paranormal Investigators, said: “The bright green anomaly in these images appears quite striking in this dark image.

“However, this is far from paranormal, what the photographer has captured is car headlights illuminating the grass which has created this vibrant green shape."

And Selena Wright, from Paranormal Wiltshire said: “I’d say this is a camera glitch.

“Someone living has walked into the shot. I can see an obvious pair of legs.

“The shadow of the person taking the photo is clearly seen and you can see there is a strong light source coming from the left, combined with a slow shutter speed has caused a motion blur.”

But the couple insists that no one was walking in the shot when the picture was taken.

Regardless of whether the spooky figure was a ghost or not, the couple say they "won't be going back" to the cemetery anytime soon.

Szymon said: “I’m going to be taking plenty of photos, but not in that cemetery!"