Covid-19 has forced Japan to close a New Year’s Eve celebration on Mount Takao where crowds gather to watch the sunrise each year.

The event draws up to 2,000 hikers to the 2,000ft mountain, around an hour’s journey from the capital.

But it has been cancelled for the first time in history over fears that it will spread coronavirus as visitors pack together and drink booze.

Tokyo officials said they will close the Omiharashi-Enchi lookout at the summit between 5pm on December 31 and 7am on January 1, national broadcaster NHK reported. 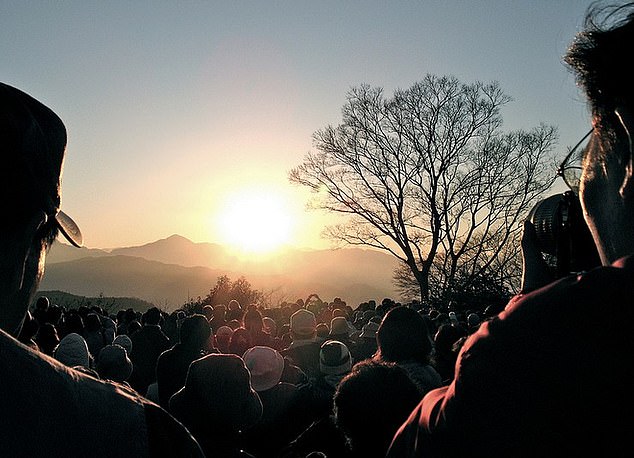 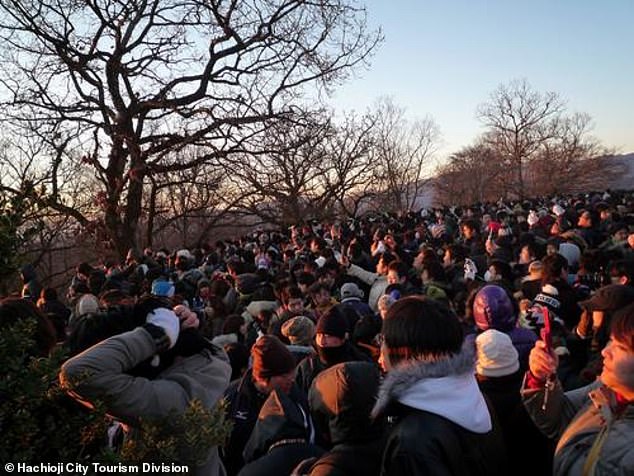 Crowds on Mount Takao on New Year’s watching the sunrise

They deemed that the large numbers, as well as the likelihood that people would be drinking alcohol and sleeping overnight on Takao was too risky.

They said that visitors will, however, still be able to walk up to Yakuoin Buddhist temple.

The closure of the summit comes as Japan’s Prime Minister urged citizens to reconsider their travel plans over the holidays.

Yoshihide Suga on Monday also pledged more support for medical workers and institutions overwhelmed by the country’s third wave of cases, and promised expanded subsidies for restaurants and other struggling businesses.

Suga, who took office in September, has seen his approval ratings plunge in recent weeks in part over his handling of the new wave of cases and his refusal to heed calls to halt a controversial tourism travel campaign, Go To.

But on Monday night he reversed course under increasing pressure, including from medical advisers to the government.

Suga said: ‘We have decided to take strongest steps possible in order to stop the spread of the infections… so that all of you can welcome the New Year in peace and quiet.’

He said the travel subsidy programme would be suspended between December 28 and January 11, with the halt coming into effect earlier for hardest-hit areas, including the capital Tokyo.

He also urged the public to reconsider plans to visit relatives during the holiday season.

‘I ask (the public) to carefully reconsider travel plans to return to home towns. I ask for your help so that all of us can spend a calm and quiet New Year,’ he said.

The call came as Japan sees rising infections – standing around 3,000 new cases per day – with doctors and nurses warning they are overwhelmed.

A poll by NHK found 81 percent of respondents had no plans to travel or visit their parents during the new year period, traditionally a busy travel time in Japan.

Japan has been less hard-hit than many countries – with 177,960 infections and 2,584 deaths recorded since the first case in January – and has avoided the strict lockdowns seen elsewhere.

With cases falling over the summer, the government launched campaigns to encourage travel and eating out, but these have been under fire as infections have risen, hitting daily records.

The cabinet’s approval rating has plunged 17 points in the last month, to 40 percent, according to an opinion poll released Sunday by the Mainichi Shimbun newspaper.