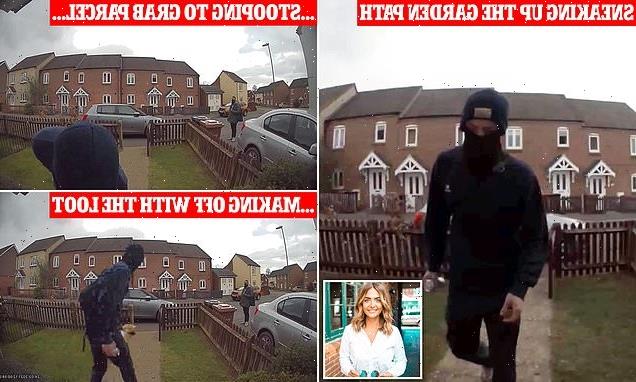 Revealed: How criminals are following delivery drivers to steal Christmas gifts from doorsteps

Out for lunch earlier this month, Hannah Power received a message on her phone to say that a parcel containing £300 worth of clothing, presents and Christmas party attire had been safely delivered.

But living in the centre of a town and having had packages stolen in the past, the 29-year-old immediately feared the worst — and ran back home.

‘At 1.47pm it said the parcel had been delivered and left on the front porch — even though I don’t have one,’ she said. ‘I got home at 2.09pm and already it was gone.’

She added that she is always clear that parcels should not be left on her doorstep, but delivered to a neighbouring shop. 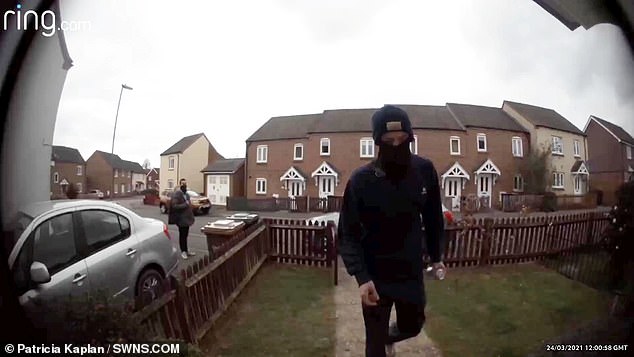 Video grab from the shocking footage of thieves caught stealing parcels from the front step of a grandmother’s home in Andover, Hampshire

‘I live in the centre of a town — my neighbours are NatWest and Boots,’ she explained. ‘It would be like leaving a parcel down your local street — it’s the most public place.’

Hannah, who has lived at the listed property in Farnham, Surrey, for two-and-a-half years, estimates that she has had ten parcels stolen in that time, worth a total of about £700. The latest to go missing was delivered by Yodel last week and was from Zara. A Yodel spokesperson said: ‘The safe delivery of parcels is our number-one priority and we are sorry to hear about Ms Power’s experience.’

‘No matter what I do, this happens all the time,’ says Hannah, a self-employed personal branding coach to business owners.

‘I have a sign which says: “Do not leave parcels there, please take it to the shop.” I laminated it myself because that’s how much of an annoyance this is.

‘In the past, I have bought stickers saying “CCTV in operation” and a fake CCTV camera, but I live in a listed building so had to take it down. It is an absolute pain and makes me nervous ordering things online. I live alone — what else can I do? Hire a private concierge?’

And she is far from alone in finding herself facing that dilemma this Christmas.

Because homeowners the length and breadth of Britain are reporting an unprecedented outbreak of ‘porch piracy’ — a term given to the theft of deliveries left outside homes.

Porch piracy might not be new, but with online shopping booming due to a combination of Covid and the festive season — it’s estimated that about one billion parcels will be delivered in the month leading up to Christmas — there are rich pickings to be had for thieves this year. 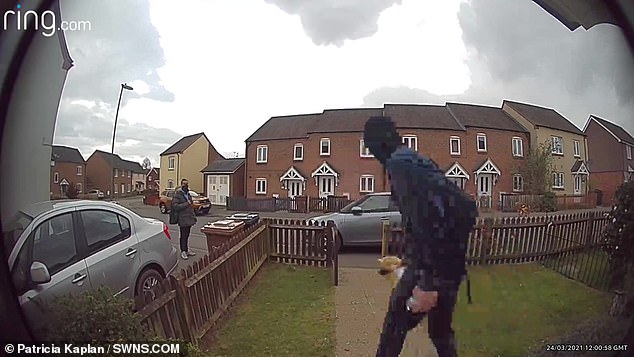 Indeed, experts estimate that ten parcels are lost every single minute of the day, with a record £50 million-worth set to go missing this December alone.

Worryingly, the situation has got so bad that some police forces are now advising homeowners to avoid home deliveries altogether — and opt for click-and-collect instead.

And while doorstep thefts are assumed to be largely opportunistic crimes, there are fears that gangs are now muscling in on the action.

One courier told the Daily Mail how her car had twice been followed by suspected thieves tailing her in another vehicle.

‘People do follow us to see where we leave parcels and then they lift them,’ said the woman, who has worked for delivery firm Hermes for the past five years.

‘They followed us on the round for no other reason than to see where we left parcels. When I realised what they were doing, I had to stop and then deliver the next day. It meant I missed out on a day’s work, but I guess others might not bother.’

That some customers describe thefts literally within a couple of minutes of delivery also paints a picture of a slick thieving operation in some areas.

Molly Ceglowski was watching a film with her family at her home in West London when she got a message informing her that a parcel had been ‘successfully delivered’.

The email included a photo showing the package, containing a pink birthday dress for her daughter Martha, four, on the doorstep.

But by the time she got downstairs just four minutes later, it was gone. ‘I got the email at 6.37pm and by 6.41pm it had disappeared,’ Ms Ceglowski said.

‘There were four of us in the house, lights blazing, but the driver hadn’t rung the bell or knocked.’

The 36-year-old radio producer says neighbours had also been targeted, with the speed of the thefts adding to the speculation that they could be co-ordinated. 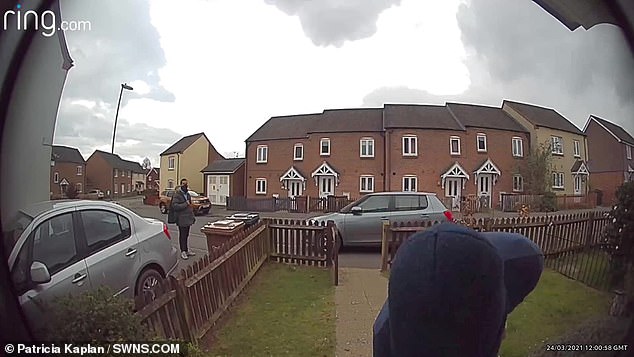 Only when watching back footage on her video doorbell did she discover that her parcel had been taken, minutes after it was delivered

It’s not just thefts that are an issue. According to new research by Which? four out of ten households receiving Christmas deliveries from online retailers saw them go wrong last year.

The consumer watchdog surveyed more than 2,000 people about the issues they had encountered. Among the reported blunders were items arriving damaged, parcels being dumped in the bin and others being thrown over fences, including a crate of wine that was hurled over a garden gate.

Of those who reported a delivery that went wrong, one in five was delivered late, one in ten was left outside without consent and one in 14 went missing. And it is those missing parcels that cause most concern. Like Hannah Power, many victims of porch piracy claim that couriers ignore their instructions not to leave parcels on the doorstep, or leave them in obviously unsafe places.

Another homeowner who recently lost more than £100 worth of goods told the Mail how, earlier this month, she had ordered a range of Christmas presents that were left outside her home in the Midlands in a large box.

By the time she got back from work it had been stolen. She then left a sign clearly instructing couriers not to leave parcels. But exactly the same thing happened. ‘Again, I got home after a long day of work to no parcel,’ she said.

The courier who spoke to the Mail admitted ‘there are a handful [of drivers] giving good couriers a bad name’, but insisted they are under unprecedented pressure to deliver more and more parcels by companies who just do not take on enough staff — and that this has contributed to a growing number of thefts.

‘In the past two years because of Covid, the volumes have just shot up and all the courier companies have not sorted it out —there are not enough couriers doing the job,’ she said.

‘I’m working seven days a week on a rural route and deliver 160 parcels a day, at a rate of about 25 an hour, but you have got people in city or town routes who can easily be doing 250 parcels a day.

‘On average I am paid 60p a parcel and if I don’t deliver the parcel, I don’t get paid and have to take it back to the depot and it’s added on to my round the next day.’

She added: ‘Ninety per cent of couriers have their own set routes so they know their customers and can build a relationship with them, and they know where to leave their parcels so that it is safe.

‘But then you get cover couriers who don’t know the area, or people who have come in to cover the backlog. At this time of year there are lots of temporary drivers brought in. They don’t know their area and they don’t know how it works. Any courier should know you don’t leave a parcel on a busy street, but they just want the parcels out.’

Her point about the pressure on couriers is echoed by Anne Pardoe at Citizens Advice, which has seen visits to its website offering advice on stolen parcels rise by almost 50 per cent year-on-year.

‘This is really concerning for the millions of people who’ll be ordering Christmas gifts,’ she said. ‘We know delivery drivers are under huge pressure to deliver high volumes each day, meaning parcels are often left in unsafe locations, like doorsteps and bins.

‘So, while criminals are to blame for their actions, delivery companies make it worse by setting high delivery quotas for their drivers.

‘Companies must reduce the pressure on drivers and make it easier for customers to tell them what they want to happen with their parcel if they’re out.’ In situations like this, when a parcel is not received, the advice is to contact the retailer from whom the missing item was purchased.

‘Your contract is with the retailer, so they need to resolve any issues that arise,’ says consumer rights expert Scott Dixon.

‘Under the Consumer Rights Act 2015 it is the retailer’s legal responsibility to make sure the item is safely delivered to you.’

In Hannah Power’s case, the money was refunded by Zara. But this does not apply if specific instructions have been given for the item to be left, for example, ‘in shed at rear’, or another designated safe place.

If it is then stolen, it is the homeowner who is responsible. This is because the retailer and courier have simply followed your instructions.

While such a theft could be reported to police, unless a thief broke into your house to steal the parcel, home insurers are unlikely to pay out on such a claim.

As for those behind the porch piracy pandemic, footage captured on home CCTV systems suggests many are still opportunistic crimes perpetrated by passers-by who spot a parcel and then steal it. Earlier this year, Darren Grimwood admitted stealing parcels from four houses in Ipswich.

The 34-year-old has a long criminal record, and had in the past been convicted of breaking in to homes and schools. Stealing from a doorstep is likely to attract a lesser punishment than burglary.

For stealing the parcels, one of which included a pair of trainers, Grimwood was ordered to pay compensation of just £164.

But the courier who spoke to the Mail also added that customers are not without blame. ‘There are a lot of customers who are great, but there are some who will claim not to have received a parcel when they actually did,’ she said.

‘People don’t help themselves — if they wanted they could go to a DIY shop and just buy a secure box to put deliveries in.’

There is an increasingly high-tech range of gadgets on the market to choose from. These include devices such as the iParcelBox, which can be fixed to the house and which connects to your wifi network, allowing you to open and close it remotely to receive multiple deliveries.

There is also a growing range of doorbell-mounted cameras such as Amazon-owned Ring, which monitor anyone approaching your door and allow homeowners to speak remotely to delivery drivers. The online giant is looking to develop the device further by incorporating artificial intelligence into it.

According to a patent filed last year, it would learn to identify any packages left there during the day. Anyone seen trying to move a package would then be automatically asked to prove their identity using an identity card, for example, to prove they are allowed to take the parcel away.

For its part, Yodel says it encourages all customers to use its app, website or customer portal to keep track of their delivery and update any delivery preferences.

In the meantime, those who have lost out should console themselves with the thought of the thief who, earlier this month, was caught on CCTV stealing a large box from the doorstep of a house in Norwich.

When he opened it he would have discovered that rather than containing a valuable haul of Christmas gifts, it was filled with more than 100 bulk-buy nappies.