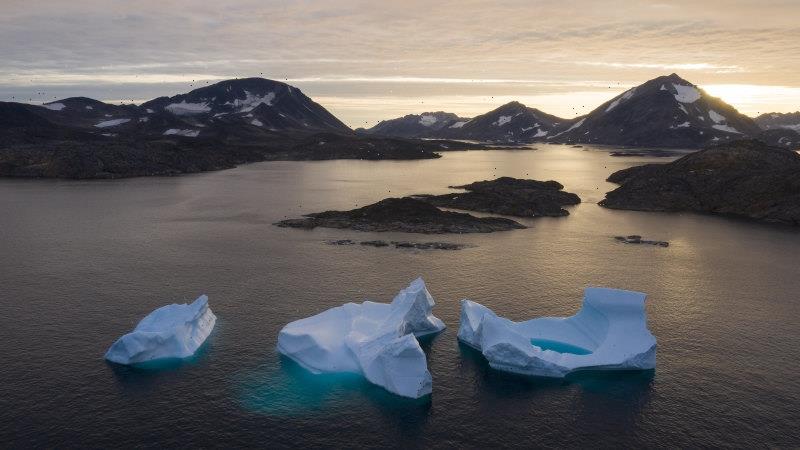 Human-caused warming has led to an “almost complete loss of stability” in the system that drives Atlantic Ocean currents, a new study has found – raising the worrying prospect that this critical aquatic “conveyer belt” could be close to collapse.

In recent years, scientists have warned about a weakening of the Atlantic Meridional Overturning Circulation (AMOC), which transports warm, salty water from the tropics to northern Europe and then sends colder water back south along the ocean floor. Researchers who study ancient climate change have also uncovered evidence that the AMOC can turn off abruptly, causing wild temperature swings and other dramatic shifts in global weather systems. 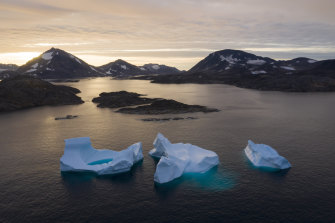 An influx of freshwater from melting ice sheets and glaciers is diluting the North Atlantic’s saltiness.Credit:AP

Scientists haven’t directly observed the AMOC slowing down. But the new analysis, published on Thursday in the journal Nature Climate Change, draws on more than a century of ocean temperature and salinity data to show significant changes in eight indirect measures of the circulation’s strength.

These indicators suggest that the AMOC is running out of steam, making it more susceptible to disruptions that might knock it out of equilibrium, says study author Niklas Boers, a researcher at the Potsdam Institute for Climate Impact Science in Germany.

If the circulation shuts down, it could bring extreme cold to Europe and parts of North America, raise sea levels along the east coast of the United States and disrupt seasonal monsoons that provide water to much of the world.

“This is an increase in understanding … of how close to a tipping point the AMOC might already be,” said Levke Caesar, a climate physicist at Maynooth University who was not involved in the study.

Boers’ analysis doesn’t suggest exactly when the switch might happen. But “the mere possibility that the AMOC tipping point is close should be motivation enough for us to take countermeasures,” Caesar said. “The consequences of a collapse would likely be far-reaching.”

The AMOC is the product of a gigantic, ocean-wide balancing act. It starts in the tropics, where high temperatures not only warm up the seawater but increase its proportion of salt by boosting evaporation. This warm, salty water flows north-east from the US coastline toward Europe – creating the current we know as the Gulf Stream.

But as the current gains latitude it cools, adding density to waters already laden with salt. By the time it hits Greenland it is dense enough to sink deep beneath the surface. It pushes other submerged water south toward Antarctica, where it mixes with other ocean currents as part of a global system known as the “thermohaline circulation”.

This circulation is at the heart of Earth’s climate system, playing a critical role in redistributing heat and regulating weather patterns around the world.

As long as the necessary temperature and salinity gradients exist, AMOC is self-sustaining, Boers explained. The predictable physics that makes dense water sink and lighter water “upwell” keeps the circulation churning in an endless loop.

But climate change has shifted the balance. Higher temperatures make ocean waters warmer and lighter. An influx of freshwater from melting ice sheets and glaciers dilutes North Atlantic’s saltiness, reducing its density. If these waters aren’t heavy enough to sink, the entire AMOC will shut down.

It’s happened before. Studies suggest that, toward the end of the last ice age, a massive glacial lake burst through a declining North American ice sheet. The flood of freshwater spilled into the Atlantic, halting the AMOC and plunging much of the northern hemisphere – especially Europe – into deep cold. Gas bubbles trapped in polar ice indicate the cold spell lasted 1000 years. Analyses of plant fossils and ancient artifacts suggest that the climate shift transformed ecosystems and threw human societies into upheaval.

“The phenomenon is intrinsically bi-stable,” Woods Hole Oceanographic Institution president Peter de Menocal said of the AMOC. “It’s either on or it’s off.”

But is it about to turn off now?

“That’s the core question we’re all concerned about,” said de Menocal, who was not involved in Boers’s research.

In its 2019 “Special Report on the Ocean and Cryosphere in a Changing Climate,” the United Nations Intergovernmental Panel on Climate Change projected that the AMOC would weaken during this century, but total collapse within the next 300 years was only likely under the worst-case warming scenarios.

The new analysis suggests “the critical threshold is most likely much closer than we would have expected,” Boers said.

The “restoring forces,” or feedback loops, that keep the AMOC churning are in decline, he said. All the indicators analysed in his study – including sea surface temperature and salt concentrations – have become increasingly variable.

It’s as though the AMOC is a patient newly arrived in the emergency room, and Boers has provided scientists with an assessment of its vital signs, de Menocal said. “All the signs are consistent with the patient having a real mortal problem.”

Physical oceanographers like him are also trying to confirm the AMOC slowdown through direct observations. But the AMOC is so big and complex it will likely take years of careful monitoring and data collection before a definitive measurement is possible

“Yet everyone also realises the jeopardy of waiting for that proof,” de Menocal said.

After all, there are plenty of other indications that Earth’s climate is in unprecedented territory. This northern hemisphere summer, the Pacific Northwest was blasted by a heat wave scientists say was “virtually impossible” without human-caused warming. China, Central Europe, Uganda and India have all experienced massive, deadly floods. Wildfires are ranging from California to Turkey to the frozen forests of Siberia.

The world is more than 1 degree warmer than it was before humans started burning fossil fuels, and it’s getting hotter all the time.

And the apparent consequences of the AMOC slowing are already being felt. A persistent “cold blob” in the ocean south of Greenland is thought to result from less warm water reaching that region. The lagging Gulf Stream has caused exceptionally high sea level rise along the east coast of the United States. Key fisheries have been upended by the rapid temperature swings, and beloved species are struggling to cope with the changes.

If the AMOC does completely shut down, the change would be irreversible in human lifetimes, Boers said. The “bi-stable” nature of the phenomenon means it will find new equilibrium in its “off” state. Turning it back on would require a shift in the climate far greater than the changes that triggered the shutdown.

“It’s one of those events that should not happen, and we should try all that we can to reduce greenhouse gas emissions as quickly as possible,” Boers said. “This is a system we don’t want to mess with.”

05/08/2021 World News Comments Off on Critical ocean system may be heading for collapse due to climate change, study finds
Lifestyle