A POLICE officer has paid tribute to a custody sergeant shot dead inside a South London police station early this morning.

Met Officer Stuart James described the sergeant as a "good skipper and real gentleman" after he was gunned down by a suspect arrested just minutes earlier.

⚠️ Follow the latest updates on the Croydon shooting here 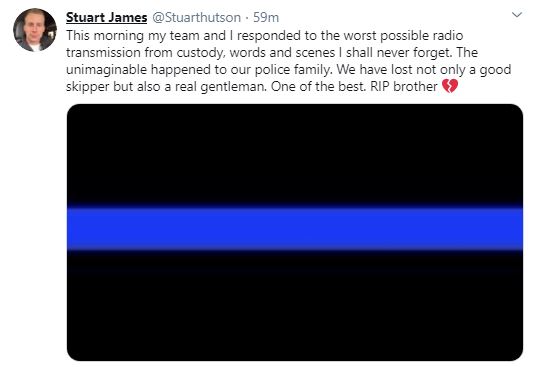 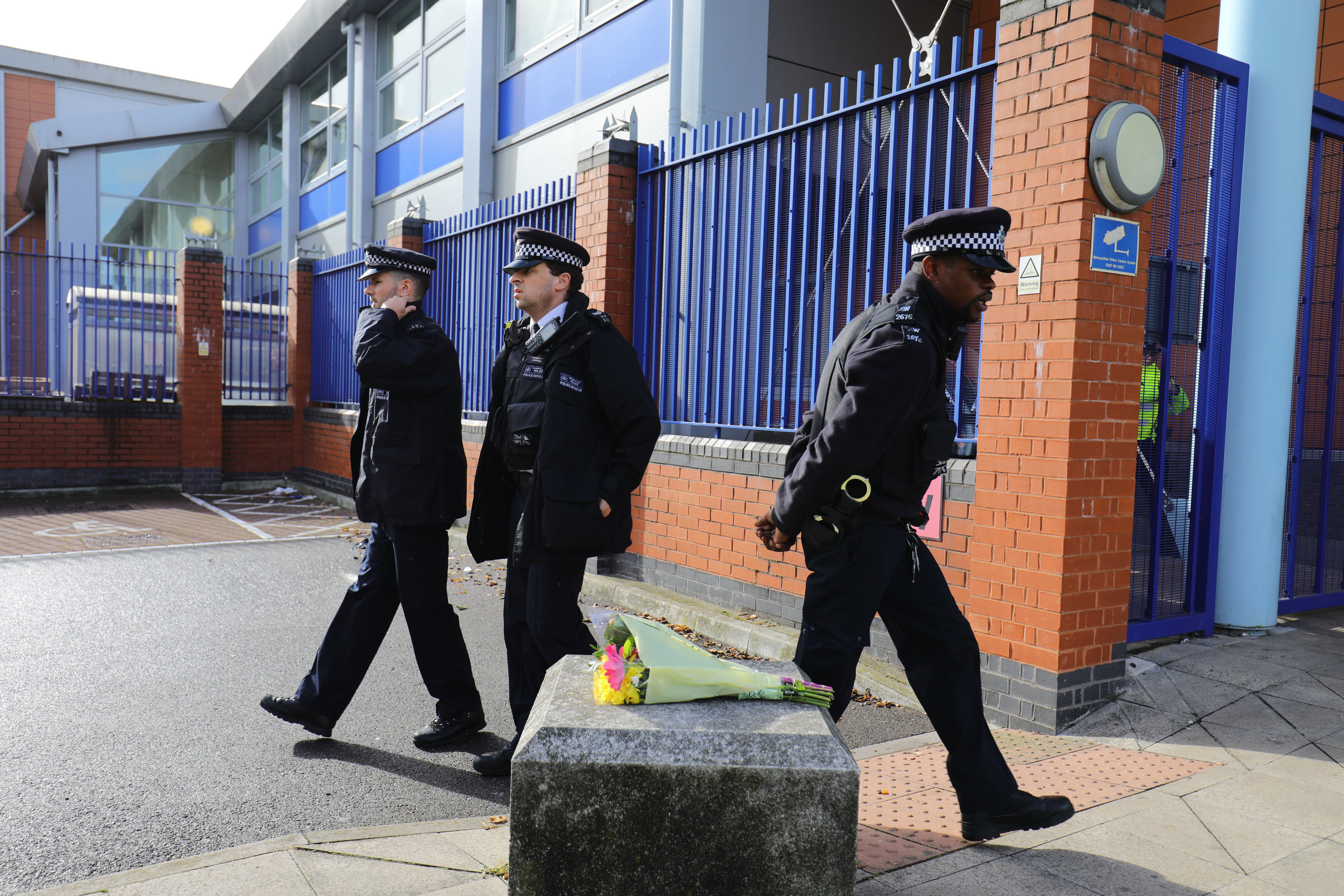 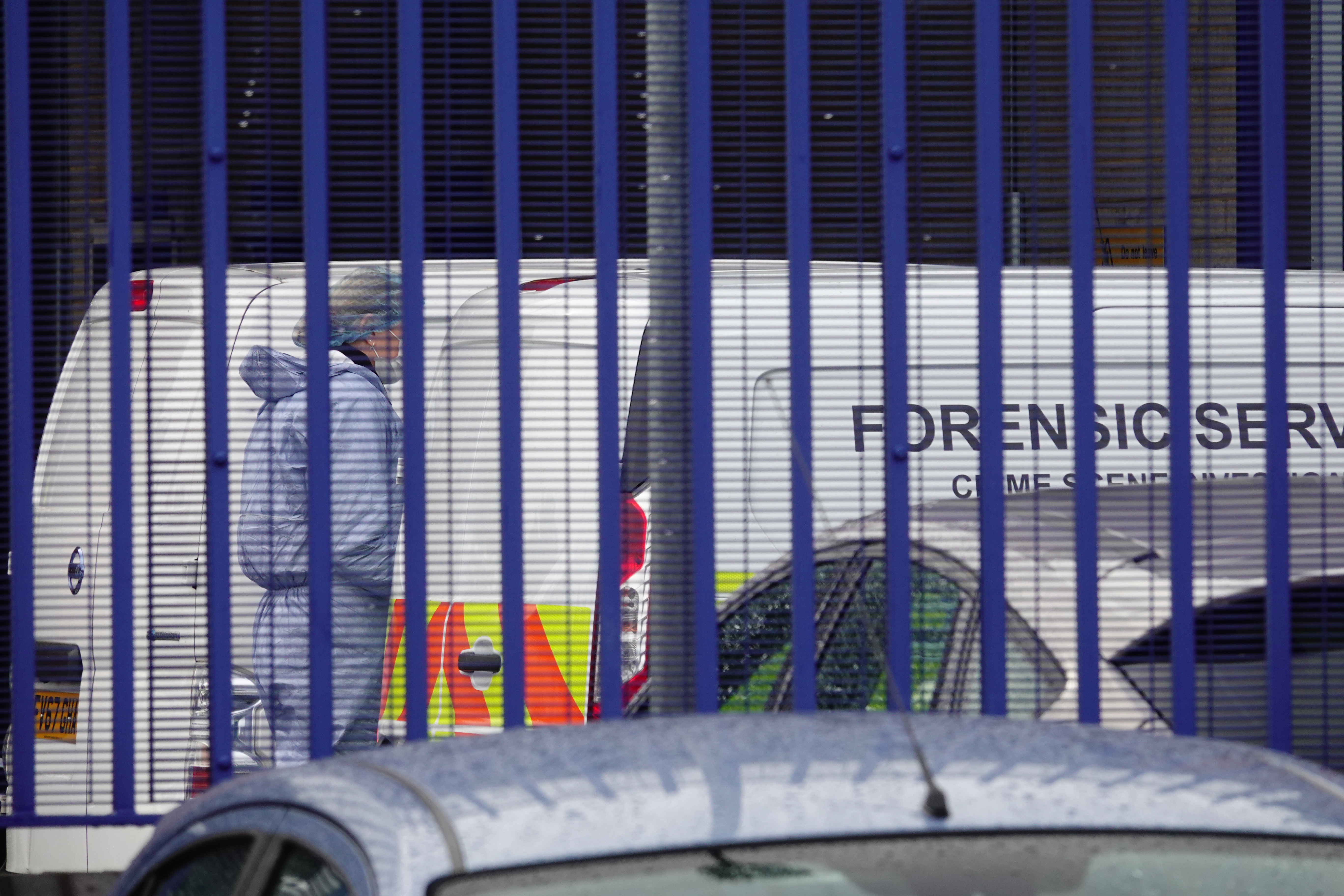 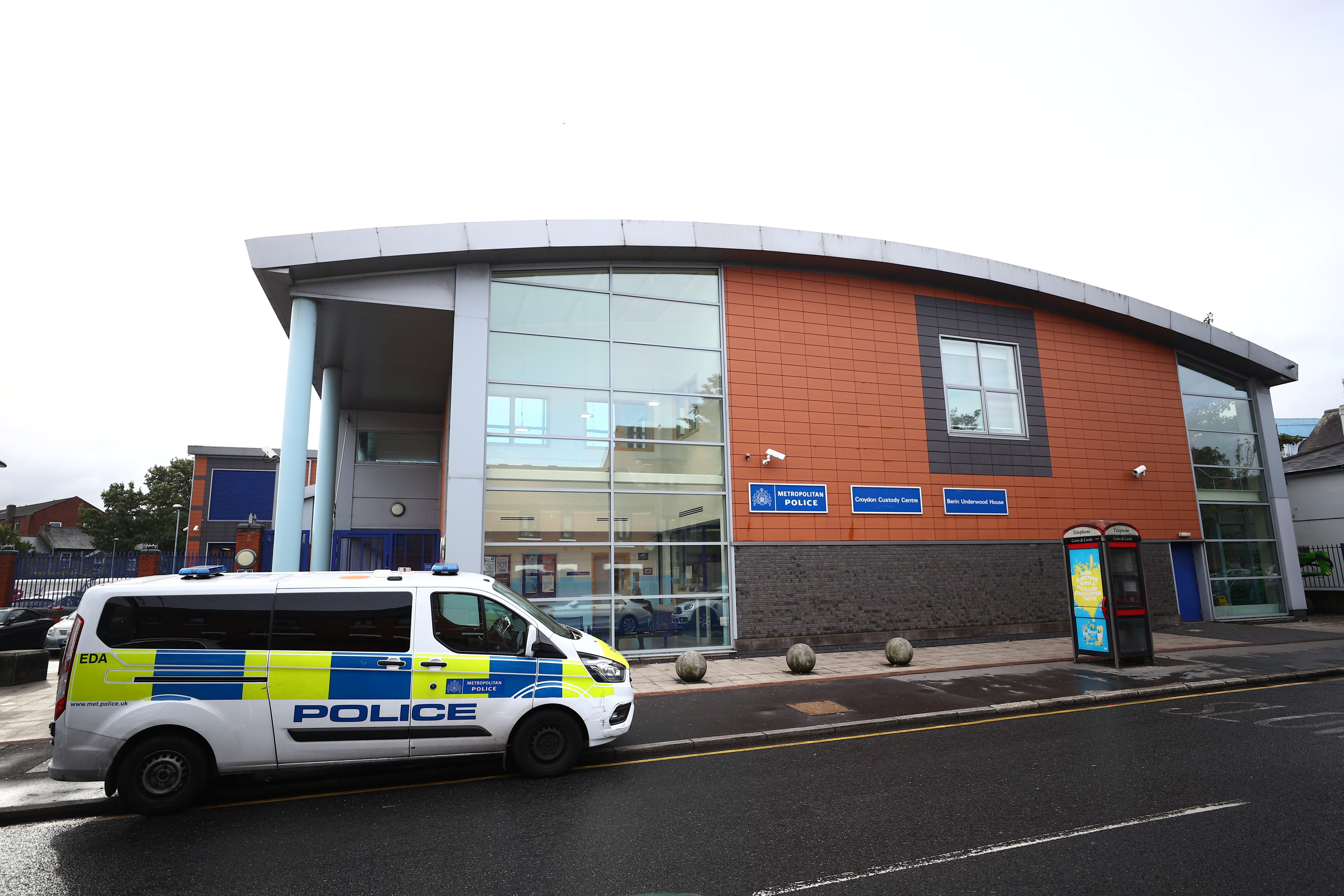 In a heartbreaking statement on Twitter, PC James wrote: "This morning my team and I responded to the worst possible radio transmission from custody.

"Words and scenes I shall never forget. The unimaginable happened to our police family.

"We have lost not only a good skipper but also a real gentleman. One of the best. RIP brother. "

The injured officer's colleagues and medics treated him at Croydon Custody Centre, before he was rushed to hospital and tragically died.

The 23-year-old suspect had been taken to Croydon police station where he pulled out a loaded gun – which hadn't been found in the earlier stop and search.

He then shot the Met officer, thought to be in his 40s, before shooting himself in the head shortly before 2am.

The gunman was taken to hospital and is in a critical condition, as the Met launches a murder probe.

The Independent Office for Police Conduct was notified and will today begin examining the shocking circumstances of the officer's death.

Questions will be asked on how the gun was apparently missed when the suspect was initially searched, after being seen acting suspiciously in Croydon town centre.

It is understood he was being booked in for possession of ammunition.

MusicBox MB, 33, from Croydon told the Sun Online: “I’ve been in there a few times. Before they take you into the station they search you outside and the van you come in.

“There is no way you can get into that station with a gun, you cant get in there with a tiny bag of weed. 100 per cent they wont have searched him properly, that's why this happened.”

The killed officer's colleagues at MPS Croydon lowered their flag to half mast and wrote an emotional tribute, saying: "Today we lost an honourable, brave and dedicated family member."

Forces throughout the UK followed suit, with stations in Cornwall, Derbyshire, Hertfordshire and Surrey all lowering their flags in respect.

Derbyshire Police wrote on Twitter:"We are deeply saddened by the news of this tragic incident in Croydon.

"Our thoughts go out to the family, friends & colleagues of the officer involved @metpoliceuk. Our flags will be flying at half mast today."

Meanwhile Commissioner Cressida Dick said: “This is a truly shocking incident in which one of our colleagues has lost his life in the most tragic circumstances.

"My heart goes out to his family, direct colleagues and friends.

“We are currently supporting his family and also have a dedicated team providing support to the officers and those in the custody centre who witnessed the shooting.

"When a colleague dies in the line of duty the shockwaves and sadness reverberates throughout the Met and our communities. Policing is a family, within London and nationally, and we will all deeply mourn our colleague."

Some of the officers killed in the line of duty since 2000:

Detective Constable Stephen Oake died during a police raid on a flat in Crumpsall, Manchester, in January 2003.

Detective Constable Michael Swindells, 44, died after he was knifed in the stomach as he and colleagues conducted a search in Birmingham in May 2004.

Pc Sharon Beshenivsky was shot dead when she and a colleague tried to stop armed robbers in Bradford in November 2005.

Pc Ricky Gray was shot in the head by a gunman who then turned the weapon on himself in Shrewsbury in 2007.

Pc Gary Toms, 37, was critically injured confronting suspects in Leyton, east London, on April 11 2009. He died six days later when his life support machine was switched off, 25 years to the day after Pc Yvonne Fletcher was shot dead outside the Libyan embassy in London while controlling a crowd of demonstrators.

Pc Keith Palmer, who was fatally stabbed in March 2017 by Khalid Masood during the Westminster Bridge terror attack.

And Pc Andrew Harper died when he was caught in a tow rope and dragged along country lanes after trying to stop quad bike thieves in Berkshire in August 2019.

A Met statement added the killed officer's family were still being told of the tragedy. No police firearms were discharged, a spokesman said.

This morning forensics could be seen searching in the yard of the custody suite as fellow officers arrived at the scene.

A shopkeeper told The Sun: “I came and opened up about 7am and there were loads of police cars outside.

“Usually at that time in the morning its really quiet, I didn’t know what happened until I saw it on the news. It's awful.”

Another local added: “It's horrible that it could happen inside the police station as well. That’s Croydon for you.”

The Prime Minister Boris Johnson tweeted saying: "My deepest condolences go to the family, friends and colleagues of the police officer who was killed in Croydon last night."

This is a truly shocking incident in which one of our colleagues has lost his life in the most tragic circumstances.

And Home Secretary Priti Patel said: “I am deeply shocked and saddened to learn that a Metropolitan Police Officer has been shot and killed in the line of duty.

“My thoughts today are with his family, friends and policing colleagues in London and across the country.

“This morning I spoke to Metropolitan Police Commissioner Cressida Dick to express my condolences and to offer whatever support is needed as this tragic event is investigated.

“This is a sad day for our country and another terrible reminder of how our police officers put themselves in danger each and every day to keep the rest of us safe.”

The Mayor of London Sadiq Khan said he is "devastated" by the news, adding "tragic incidents like this are terrible reminders of the dangers our police officers face every single day".

Labour leader Sir Keir Starmer tweeted: "Horrific to hear of a police officer being shot and killed in Croydon.

"Our police put themselves in harm's way every day to keep us safe. All my thoughts are with the officer's family, friends and colleagues."

Steve Reed, Labour MP for Croydon North, tweeted: "All of us in Croydon are in shock at this heartbreaking tragic news."

It comes just over a year after PC Andrew Harper was killed while attending a reported burglary in a rural area of Berkshire.

The 28-year-old officer died after he was allegedly dragged along a road by a vehicle in Sulhamstead, Berkshire, on August 15, 2019.

Two police officers on duty were shot and killed in 2012 by Dale Cregan.

The 35-year-old Mancunian was put behind bars in 2013 after admitting murdering the two female cops – Nicola Hughes, 23, and Fiona Bone, 32, – by luring them to his home. 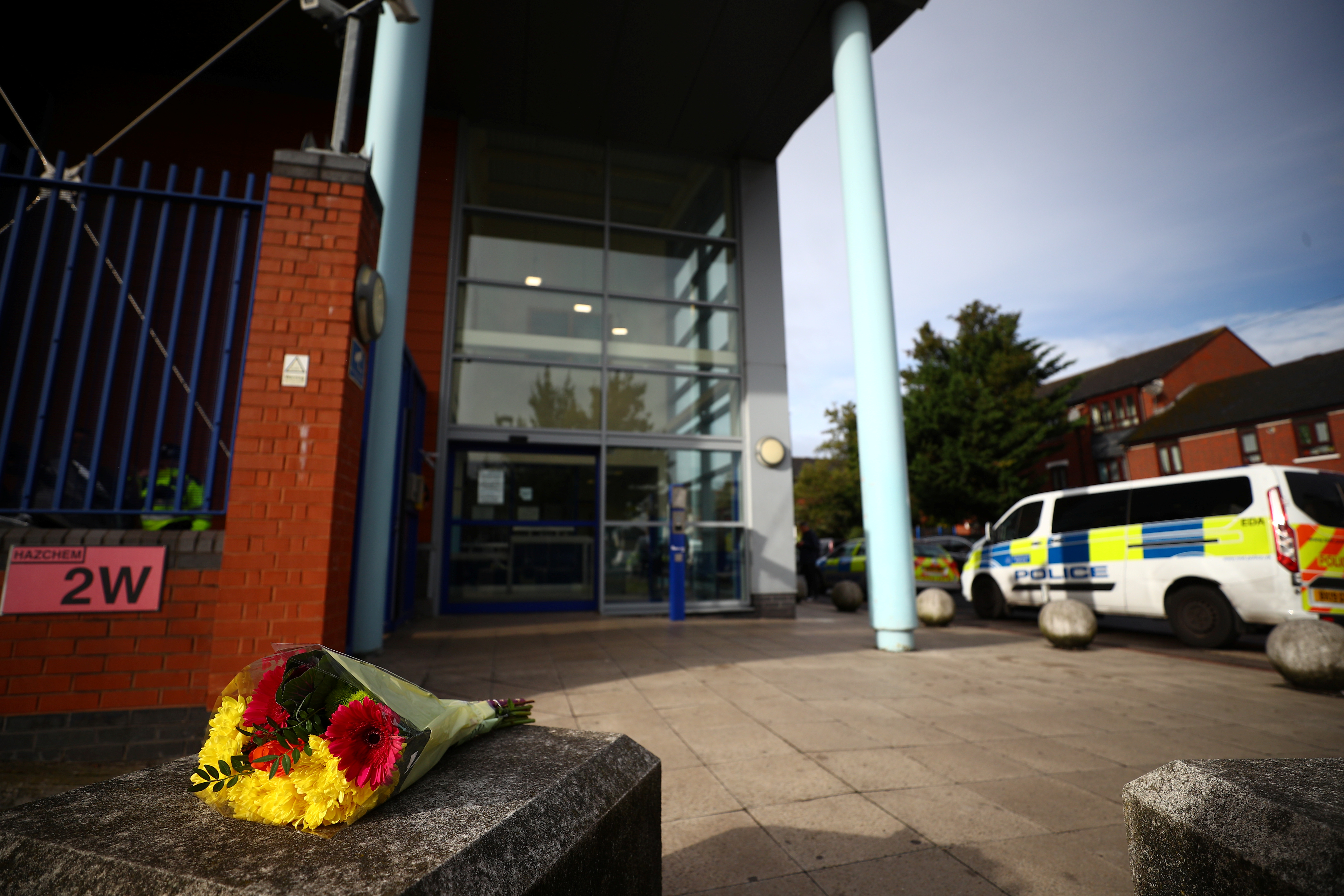 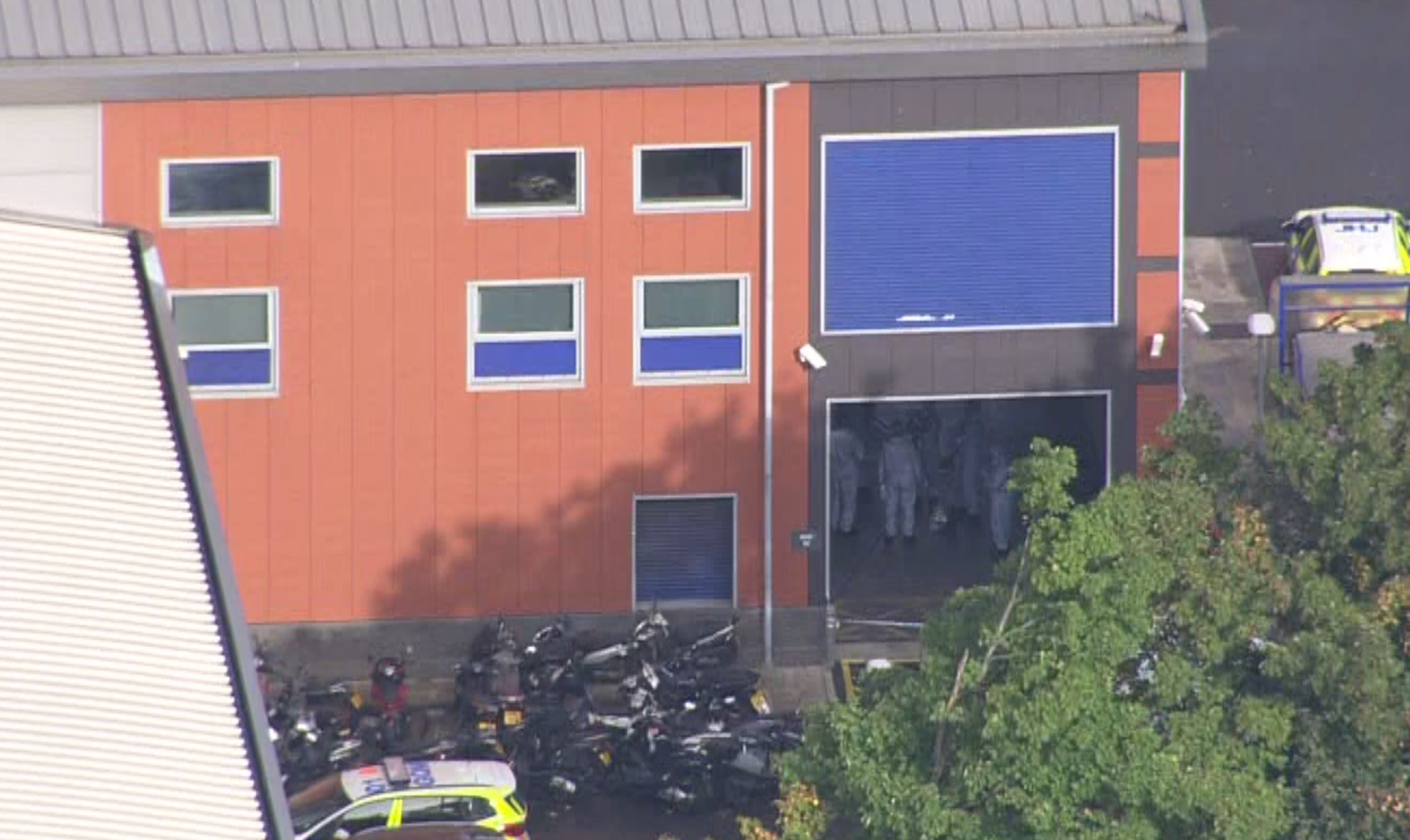 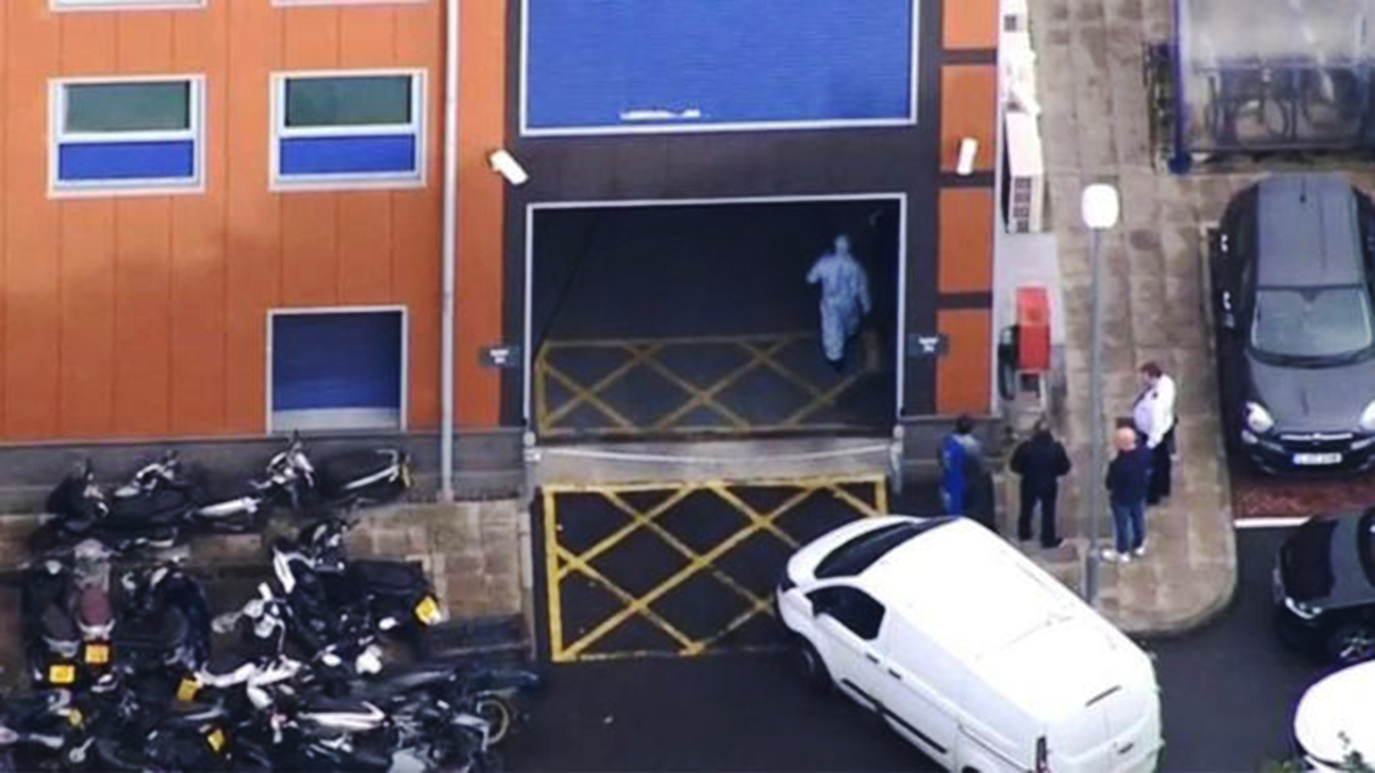 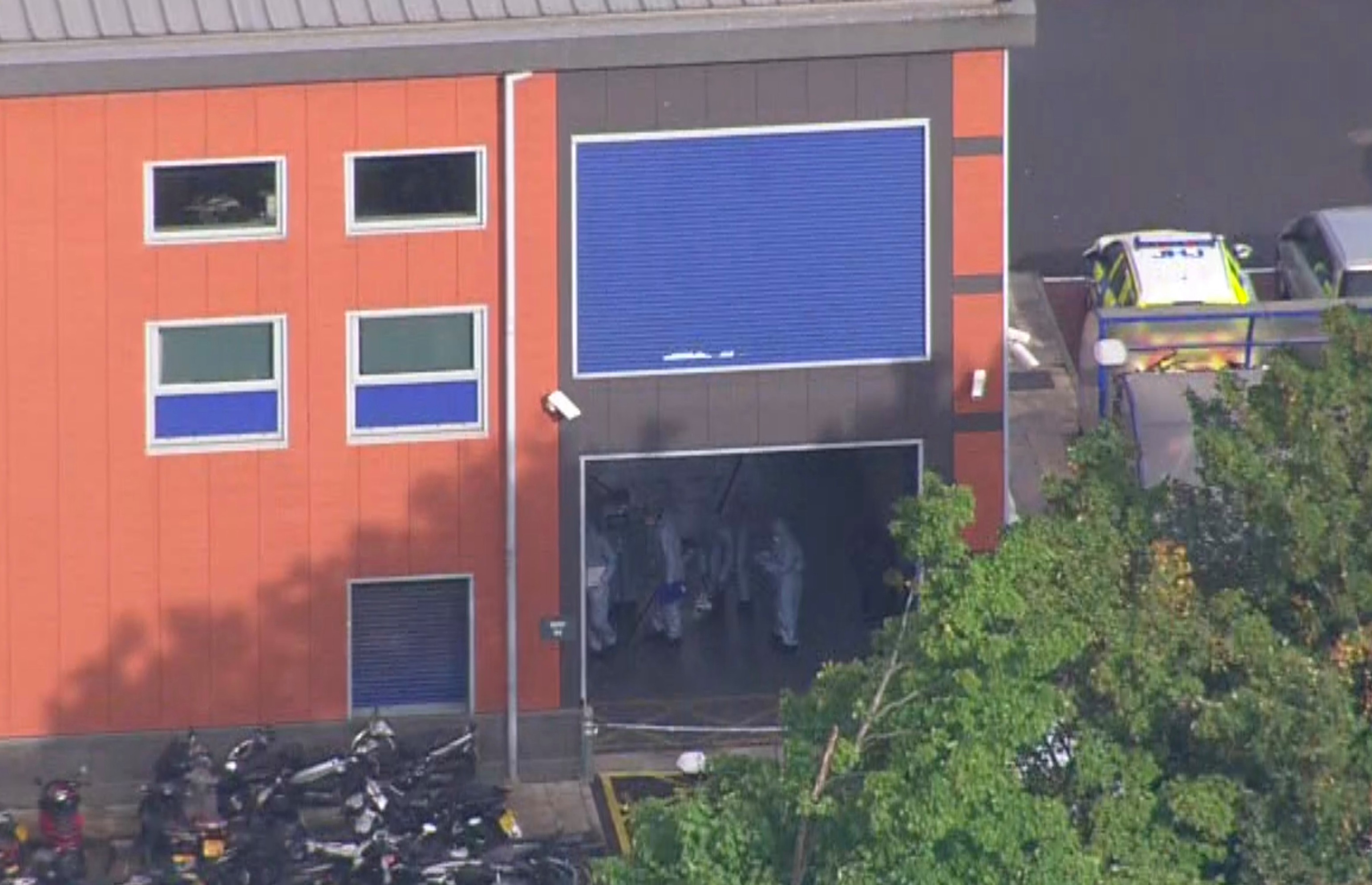 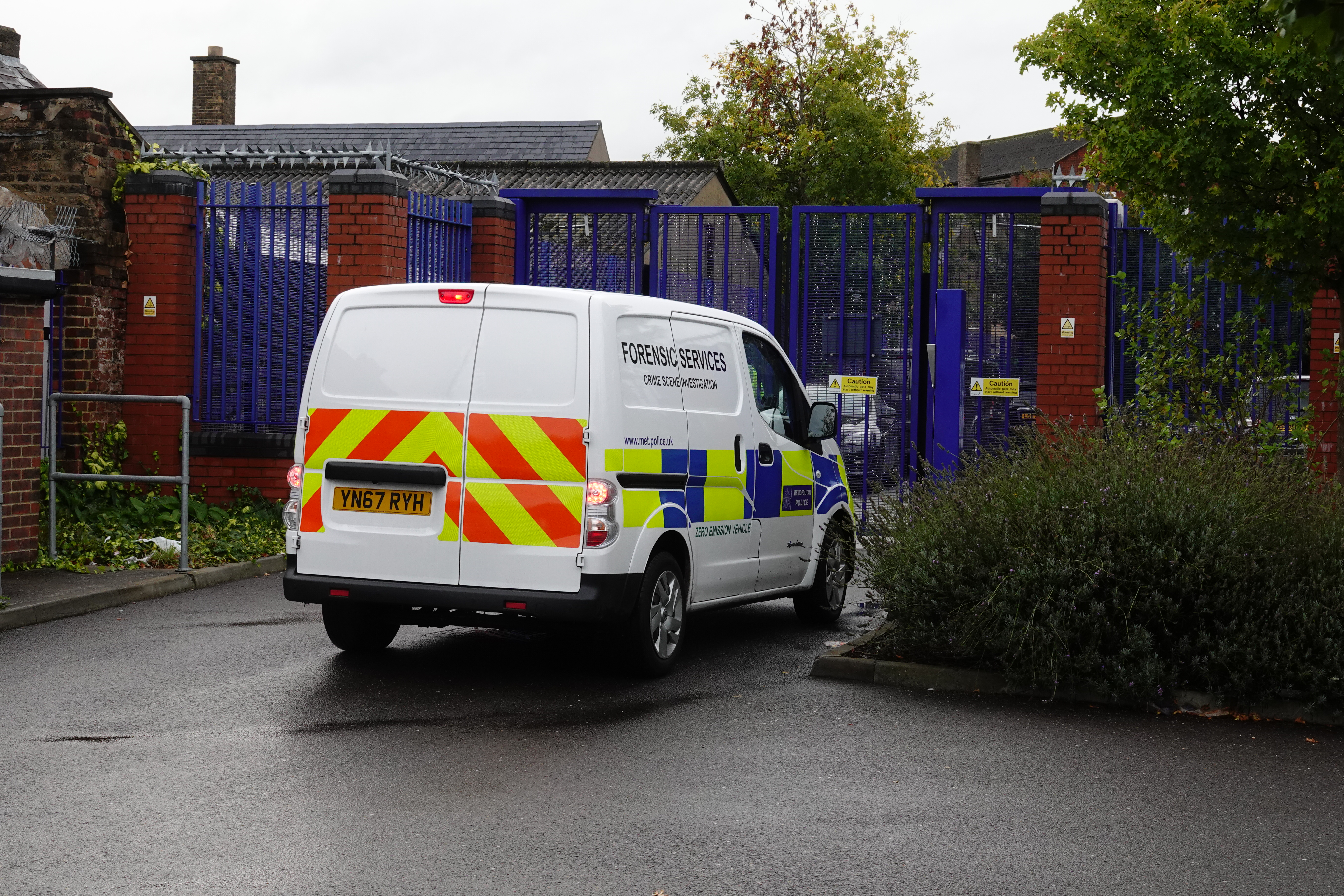 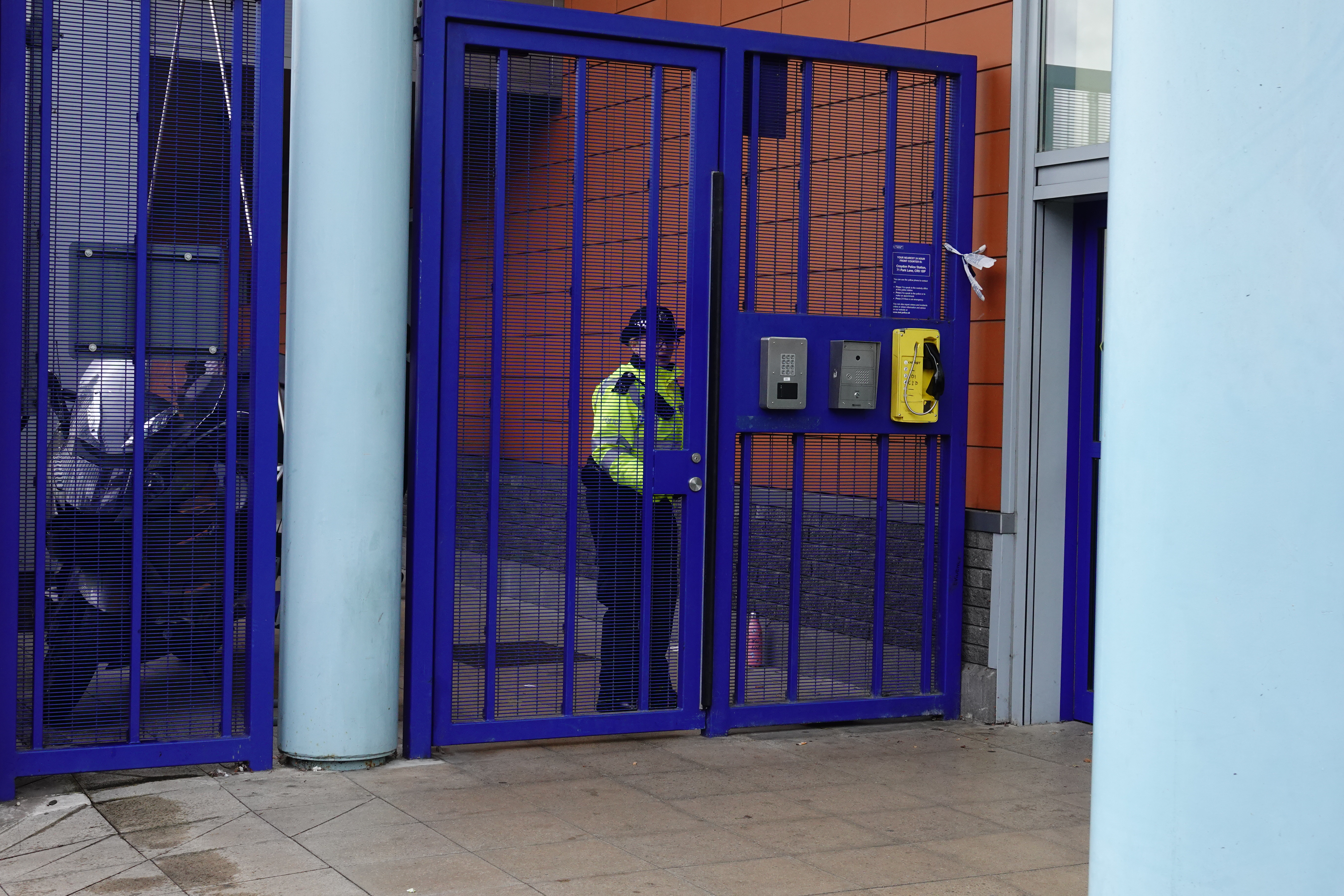 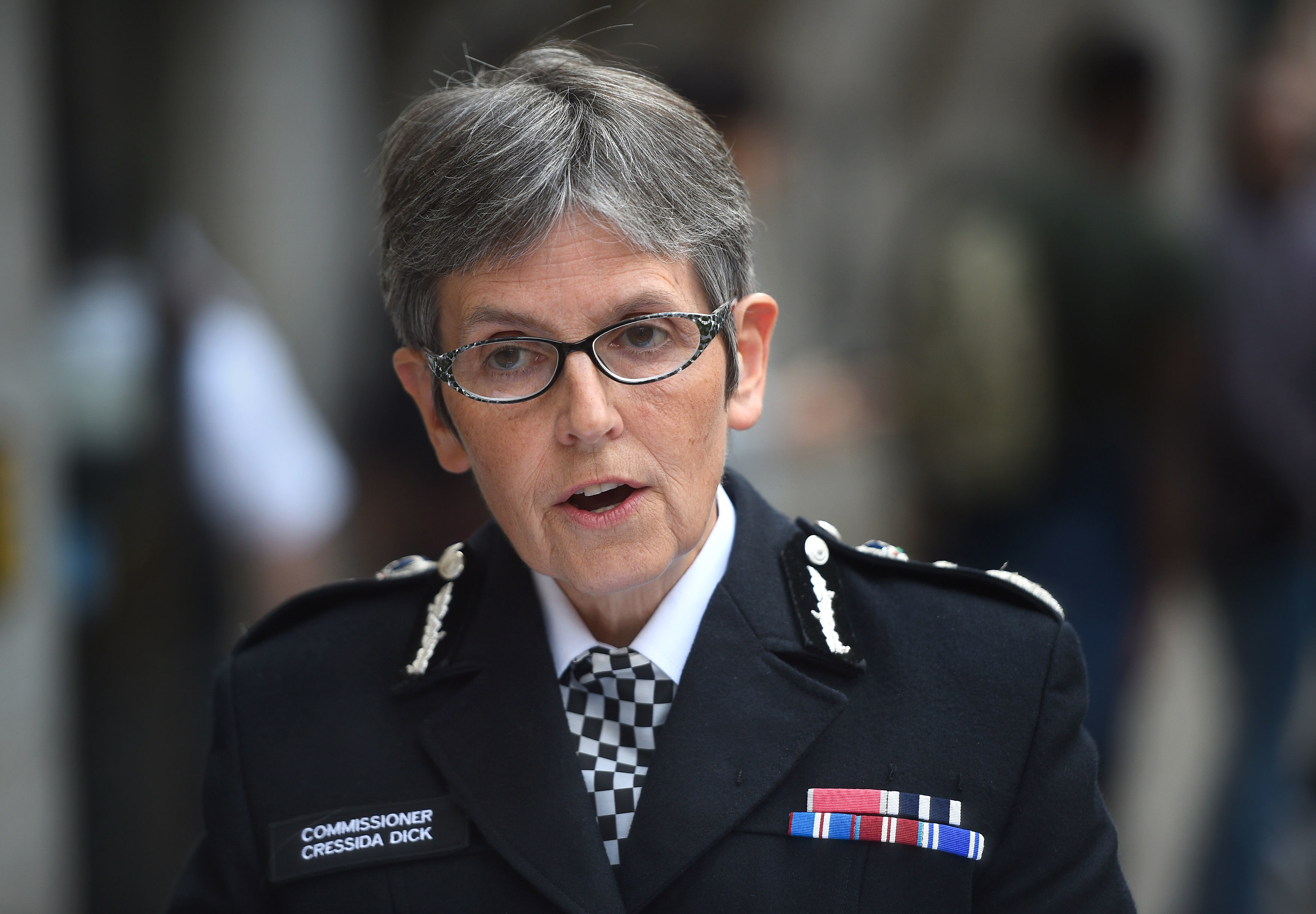