Scotland has recorded its highest number of daily coronavirus cases in almost three months, Nicola Sturgeon revealed today, as she warned the dreaded R number could now be above one.

The Scottish First Minister told a daily briefing that 19,534 people have now tested positive for the virus in Scotland, an increase of 77 on the 19,457 recorded the day before.

However, no new coronavirus deaths have been reported in the last 24 hours.

Despite the spike in daily cases, Ms Sturgeon announced she is bringing forward the planned reopening of gyms and swimming pools from September 14 to August 31.

Meanwhile, some outdoor live events and organised outdoor contact sports will be allowed to restart from August 24.

A total of 2,492 patients have died in Scotland after testing positive for Covid-19. 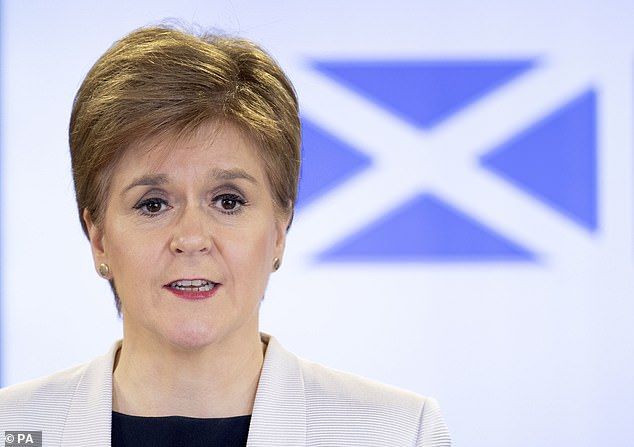 Nicola Sturgeon said today that 19,534 people have now tested positive for the virus in Scotland, an increase of 77 on the 19,457 recorded the day before

There are currently 249 people in hospital with confirmed or suspected coronavirus, an increase of one in 24 hours, and of these patients, two are in intensive care, representing no change from the previous day.

Ms Sturgeon said while the loosening of some lockdown measures will go ahead Scotland will be remaining in phase three of her four-part plan for easing restrictions.

The First Minister said: ‘I am not able to indicate, today, a move from phase three of our route map out of lockdown to phase four.

‘We will remain, for now, in phase three and I must give notice today that this may well be the case beyond the next review point too.’

For Scotland to move into phase four she said ministers would have to be satisfied that ‘the virus is no longer considered a significant threat to public health’ and she said the latest figures showed that ‘this is definitely not the case’.

She said the most recent estimate was that the R number in Scotland – the number of people infected on average by each person with the disease – ‘could currently be above one’.

Local lockdown restrictions have been imposed in Aberdeen and the First Minister said her government is ‘considering carefully and urgently whether further restrictions are necessary’.

Despite concerns about coronavirus clusters, she said reopenings pencilled in for August 24 could proceed.

That means that some outdoor live events – with physical distancing, enhanced hygiene and restricted numbers in place – can go ahead from Monday next week.

Ms Sturgeon added: ‘Organised outdoor contact sports will also resume for people of all ages. However for outdoor coaching sessions, there will be a cap of 30 on the total number of people who can be coached at any one time.

She also announced the reopening of gyms, swimming pools and indoor sports courts is being brought forward.

‘Three weeks ago, I indicated that they could reopen from September 14 but I also said that we would consider if that date could safely be brought forward – especially given the wider physical and mental health benefits of access to these facilities,’ she said.

‘Having done so, I am now able to confirm that those facilities can reopen – subject to guidance being in place – from August 31.’

Ms Sturgeon said she hoped sports stadiums could open from September 14 ‘though only for limited numbers of spectators and with strict physical distancing in place’.

Entertainment sites and cultural venues – such as theatres and live music venues – could be able to reopen then too – again with strict physical distancing in place.

‘To facilitate that, these venues can open for preparation and rehearsals from August 24,’ the First Minister said.

She added: ‘Finally, we hope that from September 14 wedding and civil partnership receptions and funeral wakes will be able to take place with more attendees than at present, although numbers will remain restricted.

‘We intend to set out more detail on this, including on permitted numbers, shortly.’