Solomon Islanders defied a government-imposed security lockdown and protested in the capital for a second day on Thursday, setting fire to buildings in the city’s Chinatown amid violence sparked by disputes over Taiwan allegiances.

Honiara was put into lockdown after protesters demanding the Prime Minister’s resignation set fire to parts of Parliament and several other buildings on Wednesday. 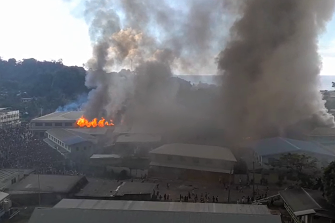 In a national address, Prime Minister Manasseh Sogavare called the riots a “sad and unfortunate event aimed at bringing a democratically elected government down” and announced a 36-hour lockdown to allow authorities to investigate.

“Hundreds of citizens took the law into their own hands today,” he said, claiming they had been “led astray by a few unscrupulous people” whom he did not name but said would soon “face the full brunt of the law.”

The Australian government has called an urgent meeting to discuss the continuing unrest. The National Security Committee of Cabinet was expected to convene on Thursday afternoon to discuss the situation, including any possible support Australia could provide.

Many of the protesters came to the capital, Honiara, on the island of Guadalcanal, from Malaita, the most populous island in the Solomons archipelago.

Tensions have simmered between the two islands since the national government switched diplomatic allegiance from Taiwan to China in 2019, a move opposed by the Malaita province premier, Daniel Suidani, who claimed he had been offered a bribe to support the switch. Sogavare denied the accusation.

Suidani pledged Malaita would never engage with Beijing and terminated licences of businesses owned by ethnic Chinese, drawing a rebuke from the national government. Tensions grew in May when Suidani sought medical treatment in Taiwan, a trip the government said was “unauthorised”.

On Tuesday, members of Parliament from Malaita put out a statement expressing fear over planned protests in Honiara and calling on Suidani to “recall our people, our brothers and sons from carrying out such a potentially dangerous and violent actions.”

Suidani said the protests, which he did not attend, were the result of the government ignoring the people’s concerns over a range of issues, including the diplomatic switch and infrastructure projects.

“Whatever the government wants the people to know, they must stand and tell them,” he told The Guardian on Wednesday amid the rioting. “They cannot run away from problems. It will not solve anything.”

Hundreds of protesters began to gather in front of the national Parliament building on Wednesday morning, shouting for Sogavare to step down, according to videos posted online by local journalists.

By midday, smoke could be seen coming from a grass hut next to Parliament where MPs sometimes gather. Soon, the hut was engulfed in flames.

Sogavare said in his address that protesters had “breached” the Parliament building and burnt the hut, as well as a police station and a building in Chinatown.

Charley Piringi, a local journalist, said the building was a Chinese-owned shop, and photos of the fire showed a sign with Chinese lettering licked by flames. Videos of the police station showed cleaners picking through its charred ruins.

Georgina Kekea, another journalist, tweeted that her former school had also burnt.

Salote Mataitini, a Fijian pilot, said she was flying from Kiribati to the Solomon Islands when she and her co-pilot landed in the midst of the unrest on Wednesday afternoon. The route to their quarantine hotel was blocked because of the disorder, with police in riot gear using shipping containers to close access to the port. When the pilots arrived at another hotel, they found police officers clashing with protesters. 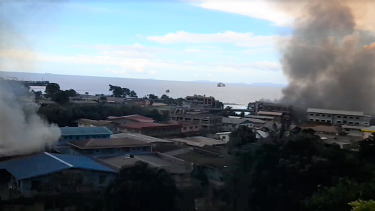 “I got a shock when I first heard the rubber bullets and tear gas because I thought I heard shootings,” she told The Washington Post in a social media message. “As we entered the room . . . we were told to stay away from the windows.”

The violence continued into the evening, according to Mataitini and Piringi, who saw fires burning in the streets as he tried to shop for food before the lockdown began on Wednesday night.

The Solomon Islands, best known for intense World War II battles between US and Japanese forces, lie in a politically volatile region where Beijing has been expanding its influence, including through its Belt and Road Infrastructure program.

Sogavare, who is serving his fourth stint as prime minister, first came to power in the aftermath of a 2000 coup fuelled by tensions between ethnic groups in the islands. The conflict, which began in 1998, claimed around 200 lives and lasted until 2003, when an Australian-led force restored law and order.

The Prime Minister alluded to the history of violence in his address.

“I had honestly thought that we had gone past the darkest days in the history of our country,” he said. “However, today’s events are a painful reminder that we have a long way to go.”