THIS is the shocking moment a Range Rover driver appeared to ram a cyclist off the road.

Sickening footage shows the driver seemingly swerving into the bike in Battersea, London, on Friday night. 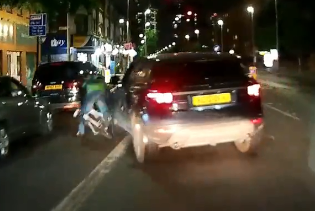 The video – filmed from a black cab's dashcam – shows the cyclist and driver arguing as they speed side-by-side down Wandsworth Road.

The car driver suddenly stamps on the brakes as the cyclist gesticulates.

The Range Rover then swerves to the left, sending the cyclist tumbling into a parking space.

It then speeds off into the distance as the cabbie stopped to help.

The cyclist was left with bleeding knuckles and injured ribs.

The cab driver Tweeted: "I witnessed this hit and run last night I stopped to help, rider said was ok but clearly intentional."