You don’t have to be an aviation expert to spot that immortal shape a mile away — or recognise an engine sound that can still reduce grown men to tears. But even lifelong Spitfire enthusiasts have never seen anything quite like the specimen in which I am sitting.

Because this Spitfire Mk IX has no camouflage or squadron markings. Aside from the Union flag under the tail and the call sign — G-IRTY — this immaculate old war-bird is naked, polished like a newly minted coin.

The official record will note that this aircraft is MJ 271, veteran of more than 50 missions over enemy territory in the last two years of World War II.

Henceforth, however, it will be remembered as ‘the Silver Spitfire’. 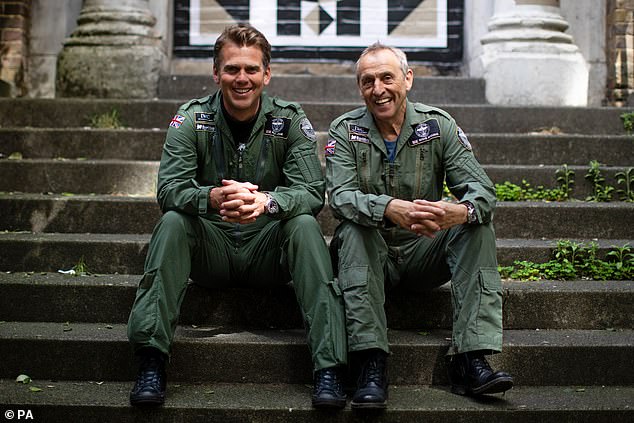 Even more remarkable than its livery (or lack of one) is what it is about to attempt. For at the grand old age of 76, this aircraft is about to become the first Spitfire to fly right round the world.

Next Monday, ‘G-IRTY’ will take off from Goodwood in Sussex with an escort of RAF Typhoons and head for Scotland, the Faroes and thence over the Atlantic on a tour of the globe covering 30 countries and 27,000 miles.

It would have been a considerable challenge had anyone tried it in 1943, when this plane came off the Vickers Supermarine production line in Castle Bromwich and went straight into action against the enemy.

To attempt this sort of journey more than seven decades later, though, seems bonkers.

For having survived a wartime crash-landing, MJ 271 spent most of its existence in a museum, before finally being restored to airworthy condition in the past few weeks.

Yet the two pilots who will undertake this record- breaking mission cannot wait to start.

‘We are not going to be in a rush and we are going to enjoy it,’ says Steve Boultbee Brooks, 58, the Oxford-based property developer who has spent a sizeable chunk of his personal fortune on acquiring and restoring two Spitfires. He has also set up a flying academy for people who want to experience the thrill of flying one.

Steve already holds an aviation record as the first person to fly a helicopter from pole to pole and has no qualms about crossing oceans in a plane that has hardly changed since the day it shot up a Junkers W 34 over Holland.

‘We are only going to fly in daylight and in nice weather,’ Steve adds, when we meet for tea in London. ‘And if we get delayed, we get delayed.’ 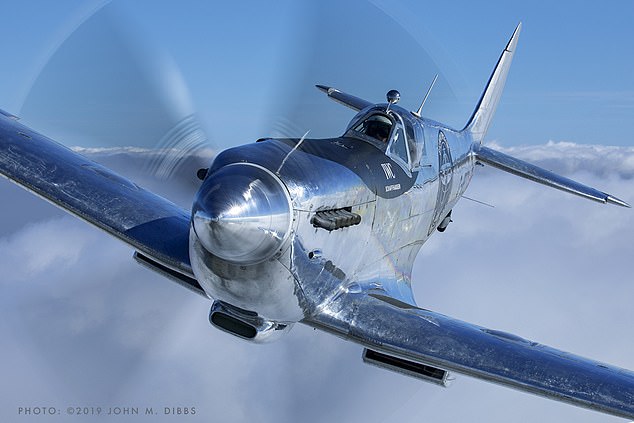 Restored to its former glory: It will be the first Spitfire to fly right round the world

While speed is not of the essence, recognition certainly is. The point of the exercise is to show off a historic piece of British engineering to the world, though there is to be nothing jingoistic about this trip.

Hence the decision to strip the plane of all its military markings and fly it in what might be called its birthday suit. Even the sponsor is impeccably neutral — IWC watches, of Switzerland.

‘The plane had been sitting in a Dutch museum for years until that merged with another museum. Eventually, it was offered to us and so we started thinking what we might do with it. That’s when we had the idea of flying round the world,’ says Matt Jones, 46, from Devon, a professional pilot who co-founded the Boultbee Flight Academy with Steve.

Their initial idea was to convert the single-seater to a two-seater configuration for the journey but they both decided that this would diminish the authenticity of the plane. So they will take turns, with one man at the controls while the other flies alongside in a modern support plane which will act as a travelling workshop-cum-rescue aircraft in the event of an incident. 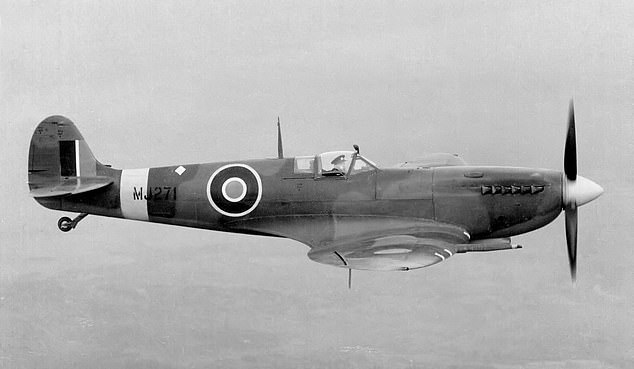 Glory days: Prince Albert of Monaco has asked for the iconic Spitfire to fly over his palace in Monaco

There is no Spitfire ejector seat and the only way out — as in wartime — is to remove the cockpit canopy and either climb out or fall out attached to a parachute.

Very early on, the two men hit on the notion of a silver Spitfire for several reasons.

First, the aircraft was in pretty good condition — with the engine intact — and therefore only needed restoration work, not rebuilding.

‘We wanted to show it off exactly as it was, dents and all,’ says Matt. ‘If you cover an aircraft in modern paint, it tends to look brand new and we didn’t want that.’

Since announcing the project, they have been inundated with invitations from embassies and air shows. ‘It’s funny but even after all these years, people all over the world are still thrilled to see a Spitfire — and quite a few countries owe it their freedom, too,’ says Steve.

Prince Albert of Monaco has asked them to fly over his palace in Monte Carlo. The King of Bahrain wants them to drop in. They have also been invited to join the Red Arrows in a fly-past over the Canadian Parliament in Ottawa.

When a U.S. Air Force fighter squadron in Nevada learned that the Spitfire was due to be passing through their patch, a message arrived at the project’s Goodwood HQ. ‘They said if we didn’t stop in Las Vegas and say hello, we’d be shot down!’ laughs Matt.

There is also a strong diplomatic argument for the Silver Spitfire.

Flying over some foreign territories in an unfamiliar plane with camouflage paintwork and military markings can be risky, especially if there are trigger-happy militias down below. Every gunport has been sealed up for the same reason. This Spitfire must be seen to come in peace. 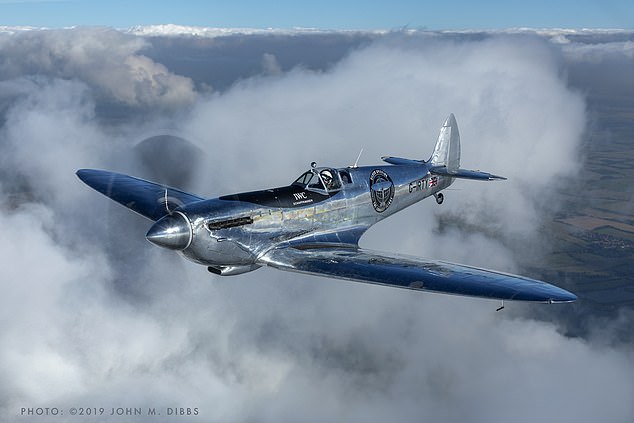 The silver exterior is also a tribute to a great pilot who died last year.

In 2015, Matt took part in a special fly-past to commemorate the 75th anniversary of the Battle of Britain. He was supposed to be flying the Boultbee Academy’s two-seater Spitfire with Prince Harry in the back. However, following a last-minute problem with another aircraft, the Prince gave up his seat to Wing Commander Tom Neil, a Battle of Britain ace, twice decorated with the Distinguished Flying Cross and the first man to land a plane in France on D-Day.

Tom later told the story in his best-selling memoir, Silver Spitfire. The title alluded to the abandoned French Spitfire he had found at a deserted airfield and cheekily commandeered as a private plane for a while, having first stripped it of its RAF livery.

‘It was a huge honour to fly Tom and we became good friends,’ says Matt. ‘So the idea of a silver Spitfire was also down to him.’

Incidentally, Matt was not the only one thrilled to know Tom Neil. Prince Harry enjoyed that day so much, he picked a photo of himself with Tom Neil as his 2015 Christmas card.

There is also a practical reason for having no livery. Applying the requisite coats of paint would add an estimated 300lb to the plane’s weight — and on a trip like this, every pound makes a difference.

Removal of all the guns, magazines and ammunition equipment has saved 2,000lb and added enough space to squeeze in another 66 gallons of fuel. Few Spitfires would fly more than 400 miles on a wartime operation, whereas this one needs to be able to cover up to 1,000 miles. 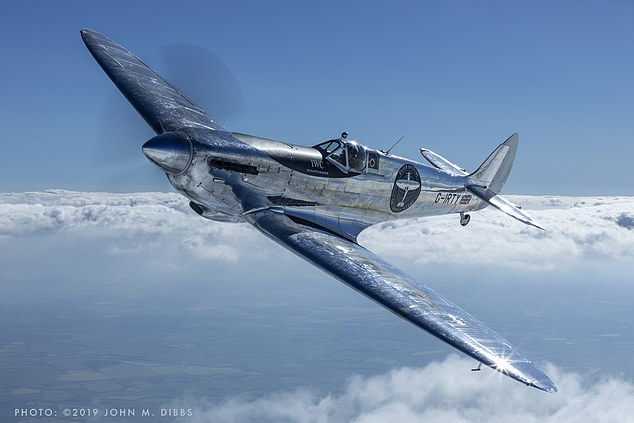 Flying high: The Spitfire will jet off on Monday from Goodwood in Sussex

‘We won’t be doing many legs longer than 400 miles,’ says Matt. ‘But you need to have enough fuel so that if you get somewhere and discover you can’t land there, you can still get back to wherever you started that day.’

I head up to Duxford in Cambridgeshire, home of the Aircraft Restoration Company, specialists in vintage aircraft. They have worked on about half of the 50 Spitfires still in operation (there are thought to be another 200 non-flying models in existence).

But even these experts had never seen a silver one until they removed the paint from MJ 271 and set to work on this project, which is believed to have cost in the region of £3 million.

The first thing that hits you is just how shiny the plane really is. It is just like a looking-glass.

We push the plane out of the hangar. Even on an overcast morning, you want to reach for your sunglasses.

Hangar manager Mo Overall, who led the restoration work, explains that the first task was to replace more than 80,000 old magnesium rivets. Even so, 95 per cent of the original beast remains. The main pieces of new kit are the tyres and the propeller — which are from Germany, of all places.

‘They just make the best blades,’ says Mo, matter-of-factly. The cockpit has also been modified with a few USB ports to accommodate a handful of modern instruments — a horizon indicator, an electronic compass and an iPad.

Otherwise, the cockpit is much the same as Tom Neil would have known it.

Invited to take a seat, I have the same boyish thrill that anyone gets when offered the chance to sit on the shoulders of giants.

The cockpit feels compact but not claustrophobic; there is a hypnotic smell of engine oil and aviation fuel (just in case it gets too hypnotic, I spot a carbon monoxide indicator, another safety device that was never there in the Forties).

VIEWED in bright sunlight, MJ 271 will be painful to the naked eye. Even the pilots, with modern sun-visors in their helmets, might have trouble looking out over the casing immediately in front of the windscreen. So this is one part of the plane that is not silver but has a dark, matt finish.

There are still plenty of tests to be completed before take-off on Monday.

I meet the Boultbee Academy’s chief pilot, former wing commander James Schofield, who is preparing to take the plane aloft for half an hour to check the latest tweaks to the fuel tanks.

A former RAF test pilot, James has flown more than 100 aircraft, from a 1917 World War I fighter to the latest U.S. Air Force F35. He ranks the Spitfire in his top three all-time favourite aircraft and has flown several models.

So how does the silver Spitfire compare?

‘Each has its own little quirks, depending on how it has been put together,’ he says. ‘I have to say that this is the straightest Spitfire I have ever flown.’

And unquestionably the shiniest.