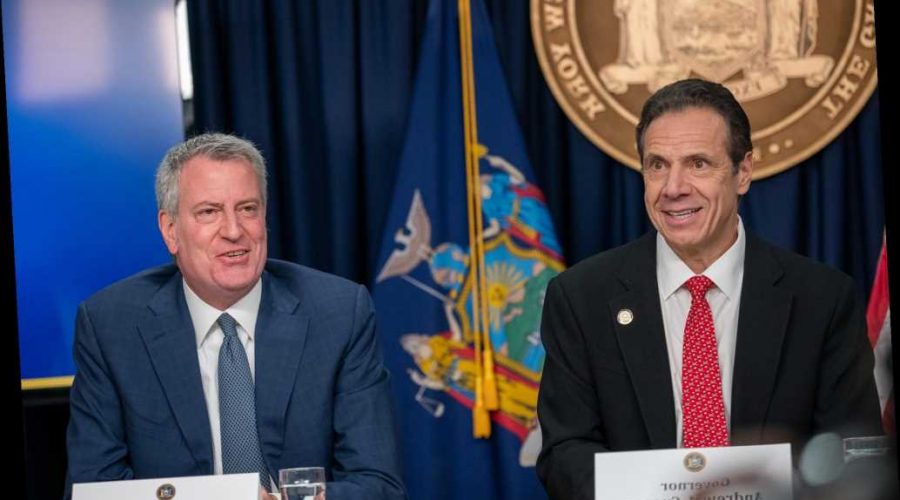 De Blasio took the jabs at Cuomo as he testified at a virtual Albany legislative budget hearing on local governments while under questioning from Long Island Assemblyman Fred Thiele who asked de Blasio about the mounting frustrations among local officials and lawmakers over the governor’s centralized control of the vaccine effort.

“Our local health officials know what they’re doing, but don’t have clear direction from the state on what we’re going to get at any given point,” de Blasio said referring to vaccine supply. “And there’s lots of specific rules the state adds on and changes all the time. It’s just gumming up the works.”

Hizzoner made the remarks as he pressed for lawmakers to reconsider the emergency powers they granted to Cuomo during the outbreak of the coronavirus pandemic almost a year ago — telling a receptive audience it was time restore local control.

“We all say that we want a recovery, well recovery means going back to normal, it means restoring the things that we’ve had — not living in a state of emergency for the rest of our lives,” de Blasio said, adding, “If you believe in recovery, you should also believe that local governments can manage their own affairs and protect their own people.”

It was the latest instance in de Blasio’s weeks-long effort to push Cuomo to expand and loosen rules around vaccine distribution.

“The incessant desire to micromanage every step, we saw what that led to,” de Blasio charged. “For a long time, that meant that vaccine was not getting where it was needed, where people were not being given the opportunity who needed to be vaccinated — it led to a lot of artificial delays.”

Hizzoner continued, “There were even reports in some places upstate of vaccine going to waste because the state rules were so stringent that vaccine had to be thrown away rather than given to people who need it.”

“What would be so much simpler is for the state to trust local officials, local health authorities, who lives are devoted to protecting people – give us a supply and then let us do what we know how to do.”

De Blasio also continued to call on the feds and the state to allow New York City to dole out its reserve of second-dose coronavirus vaccine shots for those in need of a first shot.

“It’s wrong to be withholding second doses that we could put into play right now. We do know more [vaccine] supply is coming – proportionately, with each month ahead. And we do know that health experts have said it’s appropriate to have some flexibility on when the second dose is given,” said de Blasio.

Cuomo said last week that New York is “ready, willing and able” to release its second-dose COVID-19 vaccine reserves to give more New Yorkers their first doses as long as the federal government green-lights the move.

A spokesman for the governor, Peter Ajemian, clapped back at de Blasio in a tweet Thursday, writing, “The mayor doesn’t understand the law—any EO [executive order] can be reversed by a simple resolution of the legislature, which is in session.”

“As far as the mayor saying he knows what he is doing, I respectfully suggest that every public poll suggests the people of NYC strongly disagree,” Ajemian tweeted.