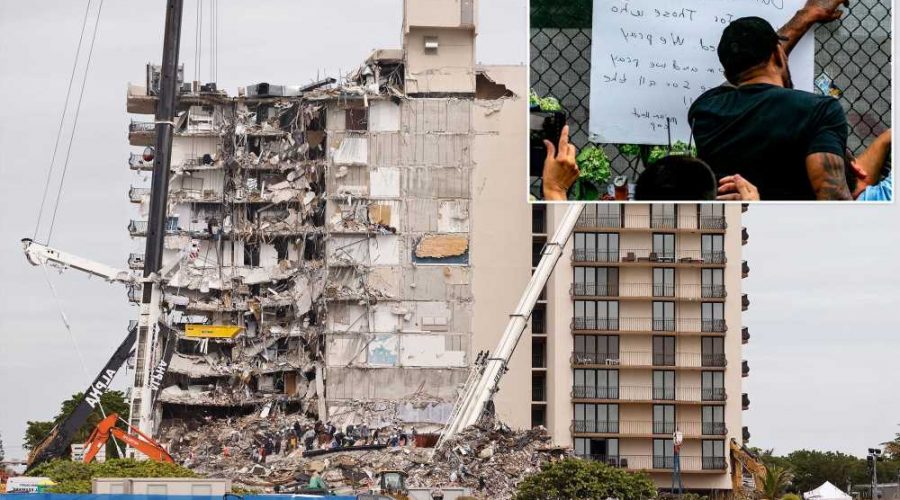 Don’t be fooled: Fake fundraisers look to cash in on condo collapse

The death toll from the collapse of a Florida condominium tower has risen to 18 after the bodies of two children were pulled from the rubble on Wednesday.

“It is also with great sorrow, real pain, that I have to share with you that two of these were children, aged 4 and 10,” Miami-Dade Mayor Daniella Levine Cava said at a briefing.

“So any loss of life, especially given the unexpected, unprecedented nature of this event, is a tragedy,” Cava said. “But the loss of our children is too great to bear.”

Seven days after the waterfront tower collapsed, there are still 145 people unaccounted for, the mayor said.

Meanwhile, crews continue to sift through the rubble of the fallen tower, which collapsed early Thursday morning, with workers from as far off as Israel and Mexico helping local workers.

Cava said earlier Wednesday that officials are conducting an audit to confirm the identities of all of those missing and those accounted for.

Relatives of missing victims have been housed in a nearby hotel and receive regular briefings on the ongoing rescue efforts.

“You pray for that miracle because my mom is like that hard woman, who if there is anyone who could survive it would be her,” Maggie Ramsey, whose 80-year-old mother, Magaly Delgado, is missing told The Post.

“But after seeing the rubble, the dust, the tiny rocks that we saw yesterday — and it was a blessing to see that because it helps you process,” Ramsey said. “Though part of what you’re processing is, ‘Jesus was a miracle.’ I get it.”

“But ti would take that sort of miracle,” she said. “That’s hard.”

“Obviously, we know the odds are against us,” Spiegel said. “We’re not stupid. I’m watching thunder. I’m watching lightning. We’re up against a night mare in terms of the weather…. But we’re still praying.”

The 12-story Champlain Towers South building was built in 1981, along with a sister tower to the north on the South Florida waterfront.

A 2018 engineer’s report flagged structural issues along a pool deck above a parking garage at the site — but the condo association only recently began work on a $15 million repair project to address the issues.

In April, the head of the condo association warned tenants that the problems highlighted in the 2018 report had gotten “significantly worse.”