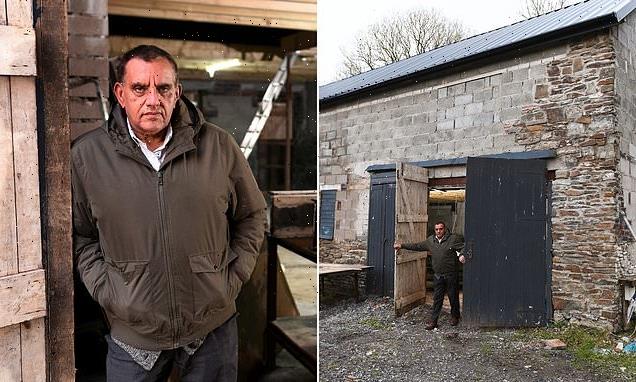 Property developer, 75, must demolish stone barn he built with windows, cavity wall and a second floor, planners rule, despite owner’s claims he intended it for his 11 pet sheep

A ‘bogus barn’ will have to be demolished by a family after planners ruled it was built just like a house in greenfield countryside.

Grandad Gerald Fuller, 75, put up the stone building on his land insisting it was a shelter for his 11 pet sheep.

But planners say it is more than a barn – because it had windows, cavity walls and even an upstairs which could be put to ‘residential use’ rather than for his animals.

Mr Fuller has been ordered to knock down the ‘barn’ he spent a year building on his family farm.

‘You can imagine I’m upset about it. It’s easily a year’s worth of work’, said Mr Fuller. 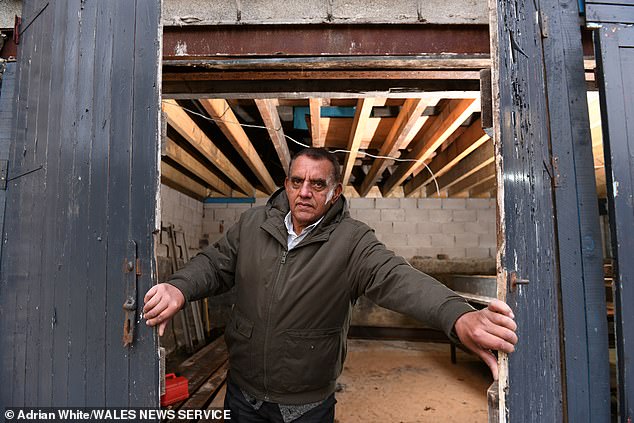 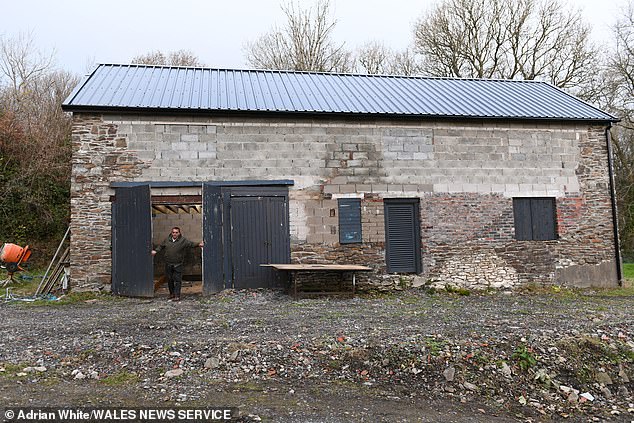 The structure has a cavity wall, which Mr Fuller explained was designed to keep out the elements, saying ‘a single-block wall would be soaking and water would come into the barn’

Planners found Mr Fuller carried out an unauthorised ‘residential development’ at the farm after being given permission to put up a barn at Furnace, near Llanelli, South Wales.

He accepts his work deviated from the planning application but says the original plan ‘wouldn’t have looked as nice as it does now’.

Mr Fuller applied three times to put a house on the spot over the last 15 years – but was turned down each time.

‘The council said it’s a greenbelt area and it’s a beauty spot,’ he added.

So he says he decided to put up a barn instead as a home for his tiny flock of 11 pet sheep. 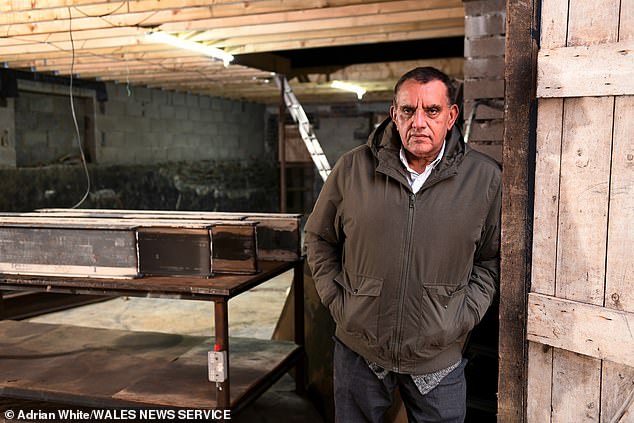 Mr Fuller has been accused of carrying out unauthorised ‘residential development’ on the site by Carmarthenshire council, who are demanding he tear down the barn 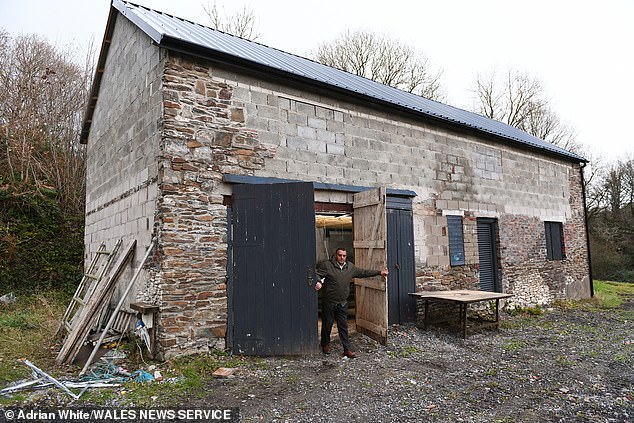 Despite not having service connections, drainage, bathrooms or kitchens, the planning inspectorate is ‘not convinced’ the structure has been erected for agricultural purposes 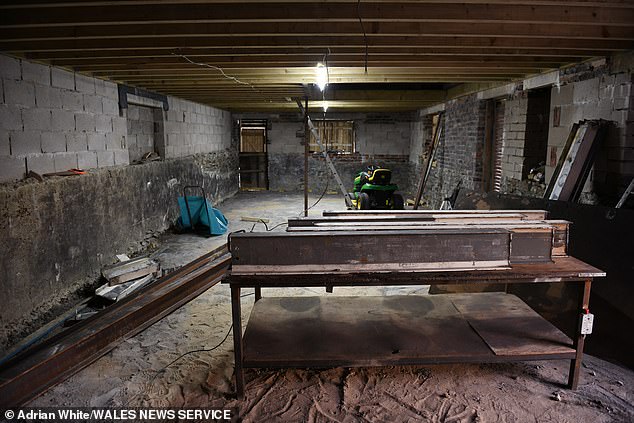 Carmarthenshire council handed Mr Fuller an enforcement notice in February 2021 and rejected his appeal in September. He has now been given a deadline to remove the structure of February 2022

‘My plan with the barn was to put animal feed or hay on the upper floor, and use the bottom part for sheep and maybe horses,’ he said.

‘This planning inspector turned up and told me: ‘You don’t put windows in a barn.’ So I blocked them up. And they still weren’t happy.’

‘The inspector came out again and brought another inspector with him. He was saying, ‘As far as we are concerned this is a house.’

‘I don’t know what’s wrong with the council – they seem to be against you all the time.’

The council handed him an enforcement notice in February demanding that he remove the building. The planning inspectorate rejected his appeal in September. 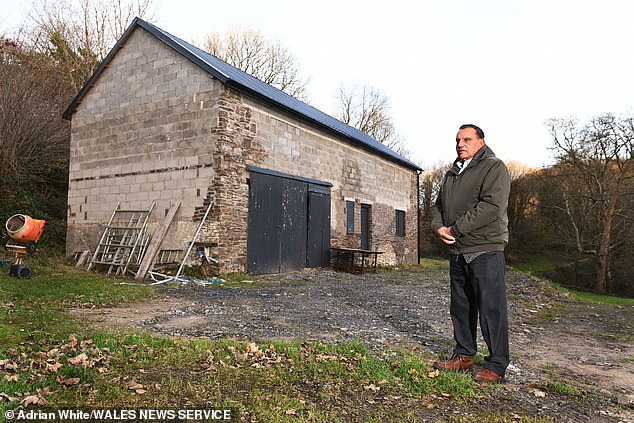 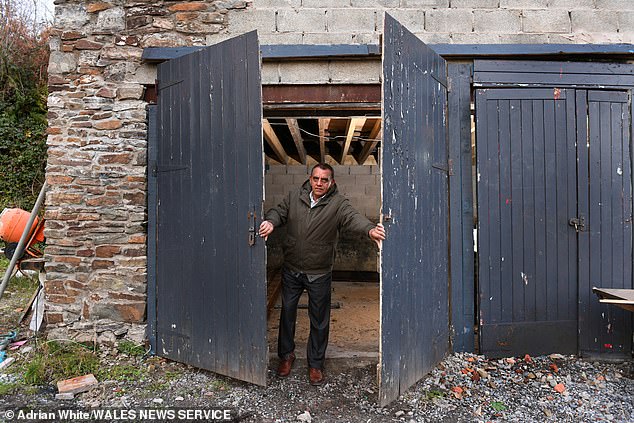 Despite blocking up the windows, Mr Fuller has still not managed to convince the planning inspectorate the building is for his tiny flock of sheep

He said: ‘They didn’t like that I put in a cavity wall. As far as the weather is concerned a single-block wall would be soaking and water would come into the barn.’

Experienced property developer Mr Fuller and his wife Elizabeth live in a converted pump house near the ‘barn’ – and he insists he doesn’t want it as a house.

Mr Fuller declined to reveal how much he spent on the property – but insisted it was a lot of time and planning. He now intends to seek the advice of a barrister ahead of the February deadline to remove the building.

The planning inspectorate’s report notes Mr Fuller’s argument that there are no service connections, drainage, bathrooms or kitchens at the site.

But the report adds: ‘The method of constructing the building, in particular the use of cavity walls, the number and position of window and door openings, the insertion of a full first-floor level together with a higher eaves, leads me to conclude that it is not being constructed for the purposes of agriculture.’

The inspectorate believes ‘the insertion of a full first-floor’ would hinder attempts to store larger farm machinery because it would restrict height.

The planning inspector’s report concludes: ‘I am still not convinced that the use of a cavity wall construction is necessary for agricultural purposes.

‘Rather, the building employs construction methods and features more commonly associated with a dwelling.’

A Carmarthenshire council spokeswoman said: ‘As advised by our planning officers and confirmed by the planning inspectorate on appeal, this development is unauthorised and as such will need to be demolished and reinstated to its former condition. This decision has been clearly communicated to Mr Fuller.’