Washington: President Donald Trump has granted a full pardon to Conrad Black, the former press baron and one-time society fixture who was found guilty of fraud and obstruction of justice in 2007.

Black, a political ally and longtime associate of Trump's, was the owner of 25 per cent of The Sydney Morning Herald and The Age in the 1990s after bidding for it in a consortium with Kerry Packer and Malcolm Turnbull. (The consortium later fell apart, but Black dominated the company until he sold out in 1996.) 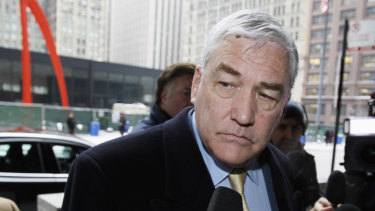 Conrad Black arrives in court in Chicago for sentencing in 2011.Credit:AP

His pardon by Trump was the latest example of the president using one of the unilateral powers of his office to absolve a high-profile public figure whose case resonates with him personally. Black is a personal friend and the author of pro-Trump opinion pieces as well as a flattering book, Donald J. Trump: A President Like No Other.

Black, who was born in Canada and is also known as Lord Black of Crossharbour, was charged with swindling his company, Hollinger International, of $US60 million ($87 million). He was sentenced to a prison term of more than six years but was released after serving just more than two years.

After a federal judge ruled that Black had not served enough time, he returned for about a year.

In a statement, the White House press secretary, Sarah Huckabee Sanders, noted that the Supreme Court "largely disagreed" with the prosecutors who put Black in jail and "overturned almost all charges in the case."

"He nevertheless spent 3.5 years in prison," she added.

Sanders described Black, who also once owned the Chicago Sun-Times, The Jerusalem Post and The Telegraph in London, as "an entrepreneur and scholar" who "has made tremendous contributions to business, as well as to political and historical thought."

She also cited support for Black from Henry Kissinger, the former secretary of state; Rush Limbaugh, the conservative radio host and a frequent golf partner of the president's; and musician Elton John.

Black, an outsize character in the vein of the president, has a long history with him. During Black's 2007 trial, Trump was expected to be called as a witness to bolster Black's defense. He was expected to fly to Chicago and testify that a lavish $US62,000 surprise party Black threw for his wife at the restaurant La Grenouille in New York — the bulk of which he charged to his company — was a business event, not a social event.

He was expected to say that he was negotiating a possible joint venture with Black's company to turn the headquarters of the Sun-Times into a hotel and residential tower.

But Black's defence lawyers decided at the last minute not to have Trump testify.

A day before his pardon was announced, Black published an opinion piece in National Review titled "Smooth Sailing Ahead for Trump." Trump was "the only serious businessman to hold the office," Black wrote, asserting that Trump would have "a stronger argument for re-election next year than any president since Richard Nixon in 1972".

On Tuesday night, Black posted an essay explaining that when the president called him last week, he believed it was a prank.

Black wrote that Trump addressed him as "the great Lord Black" and said he was pardoning him to "expunge the bad rap you got."

"We've known each other a long time," Trump said, according to Black. "But that wasn't any part of the reason. Nor has any of the supportive things you've said and written about me."