The bones of a man believed to be a vampire almost two centuries ago were identified by DNA testing to most likely be those of a middle-aged New England farmer, whose body was ravaged by tuberculosis and arthritis, a team of experts said.

Originally just known as ‘JB 55,’ from initials and an age carved into the wood lid of his coffin, DNA testing crossed with genealogy data lead an investigative team to believe the man’s name was probably John Barber, according to the Washington Post.

His identity had been a mystery since the bones were first unearthed 30 years ago, when DNA testing was not yet sophisticated enough to make such an identification possible. 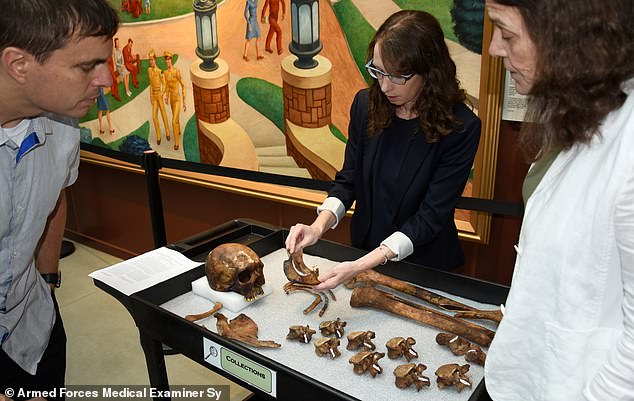 The bones of man probably known as John Farber, a 51-year-old farmer who most likely died of tuberculosis and was a suspected vampire, are shown by Dr. Kristen Pearlstein, collections manager at the National Museum of Health and Medicine, where the remains are being studied 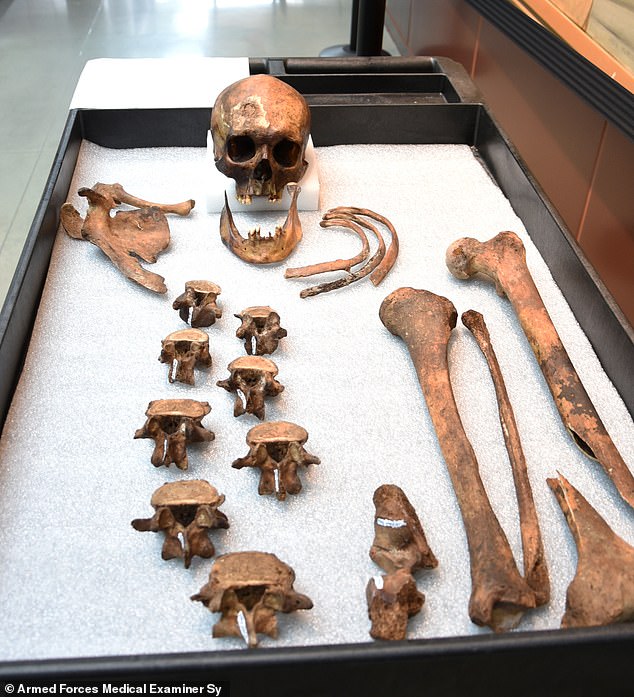 The bones believed to belong to Barber (above) were found in a skull and cross bone pattern, tipping off an investigative team that they he may have been suspected of being a vampire

Barber’s coffin had been found in a gravel quarry in Griswold, Connecticut, in 1990. Newspaper records were used to determine that Barber died around 1826.

Once opened, the coffin revealed Barber’s bones rearranged in a skull and cross bones pattern.

That tipped off researchers that the remains were most likely that of a suspected vampire from either the 1700s or 1800s, when people suffering from tuberculosis were believed to have turned into the blood-sucking fiends.

‘We do believe that he was rearranged in the grave because he was believed to be undead,’  Nicholas Bellantoni, a retired Connecticut state archaeologist who worked on the case from the start, told the Post.

Barber’s name was first mentioned in a report completed by Bellantoni and other experts at the Armed Forces Medical Examiner System’s DNA laboratory in Dover, Delaware.  The remains were later taken the National Museum of Health and Medicine in Silver Spring, Maryland, for further study. 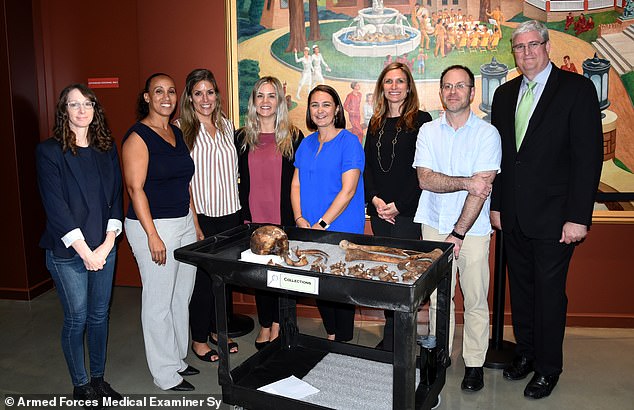 Tuberculosis, or ‘consumption’ as it was referred to when Barber was a live, led to a vampire scare in the late 1700s and early 1800s in New England, especially in Rhode Island and Connecticut.

The highly contagious bacterial infection left sufferers pale, gaunt and coughing up blood, according to author and folklorist Michael Bell.

‘The emaciated figure strikes one with terror,’ recounted an 18th-century doctor quoted by Bell in a 2013 essay in the journal Kritikos. ‘The forehead covered with drops of sweat. The cheeks . . . a livid crimson. The eyes sunk. . . . The breath offensive, quick and laborious.’

Family members often exhumed the bodies of their loved ones who succumbed to the disease, so that they could burn the heart and make sure they weren’t coming back as vampires.

‘This was being done out of fear and out of love,’ Bellantoni said.

‘People were dying in their families, and they had no way of stopping it, and just maybe this was what could stop the deaths. . . . They didn’t want to do this, but they wanted to protect those that were still living.