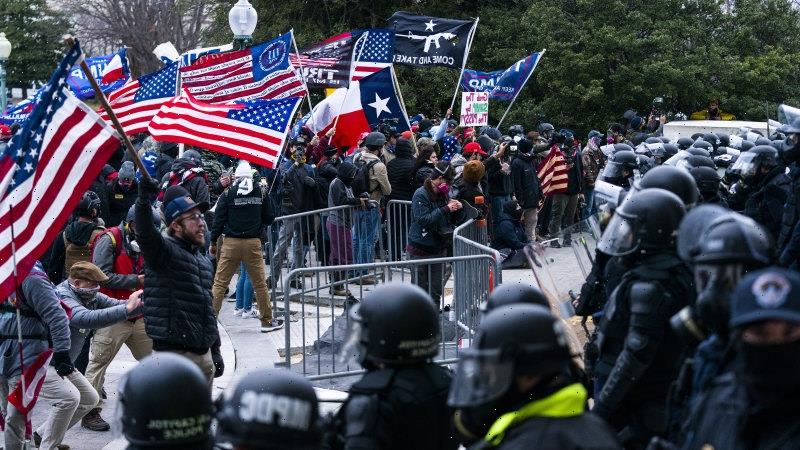 Washington: Former President Donald Trump filed a lawsuit on Monday against the US congressional committee investigating the deadly January 6 attack on the Capitol, alleging it made an illegal, unfounded and overbroad request for his White House records.

Also on Monday, Trump was questioned in a deposition for a lawsuit brought by protesters who say his security team roughed them up in the early days of his presidential campaign in 2015. 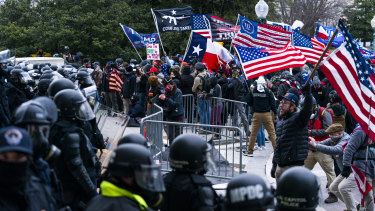 The January 6, 2021 attack on the Capitol.Credit:AP

In the lawsuit filed in US District Court for the District of Columbia, Trump asserted that materials sought by the January 6 Select Committee are covered by a legal doctrine known as executive privilege, which protects the confidentiality of some communications between White House officials.

The lawsuit seeks an injunction against the panel’s request for materials.

Many legal experts have said Trump, as the former president, cannot lawfully use executive privilege to block subpoenas issued by the House committee.

A mob of Trump supporters stormed the seat of Congress on January 6 in a failed bid to prevent lawmakers from certifying President Joe Biden’s election victory. More than 600 people now face criminal charges stemming from the event.

Earlier this month, Biden authorised the National Archives, a government agency that holds records from Trump’s time in office, to turn over an initial batch of documents requested by the Select Committee. 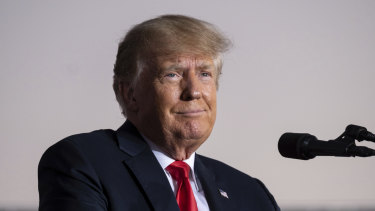 Bannon has refused to provide testimony until Trump’s assertion of executive privilege has been resolved by a court or through negotiations with the committee.

The committee said last week it would formally ask the US Justice Department to bring criminal charges against Bannon because of his defiance of the subpoena.

On Monday, Trump testified under oath behind closed doors at Trump Tower in New York City for several hours, a lawyer for the plaintiffs said. Video of the deposition will be played for a jury if the case goes to trial.

The plaintiffs’ lawyer, Benjamin Dictor, said Trump was questioned on a variety of topics, including comments he’s made at campaign rallies in which he appeared to encourage security personnel to treat protesters harshly.

The lawsuit, brought by five New Yorkers of Mexican origin, alleges that Trump’s bodyguards violently attacked them outside his eponymous Manhattan skyscraper on September 3, 2015 as they protested negative comments Trump made about Mexico and Mexican immigrants.

Trump, in a statement following the deposition, said the protesters were to blame for the scuffle and called their claim baseless, involving “injuries they never suffered, and the temporary loss of a worthless cardboard sign which was soon thereafter returned to them”.

“After years of litigation, I was pleased to have had the opportunity to tell my side of this ridiculous story — Just one more example of baseless harassment of your favourite President,” Trump said.

Trump’s demeanour in answering questions matched that of his public persona while president and the session proceeded like most depositions, said Dictor, the plaintiffs’ lawyer. He declined to go into detail about how Trump handled the questioning and refused to characterise his testimony before presenting the case to a jury.

“While we will not comment on the substance of Mr Trump’s testimony at this time, we hope today’s events serve as an example that our institutions have prevailed and no one is above the law,” Dictor said.

Trump is a defendant in the lawsuit, along with his company, the Trump Organisation, his presidential campaign and security personnel.

Among other demands, the plaintiffs want the real estate mogul turned former commander-in-chief to pay punitive damages, arguing he should have known the security personnel would act in a “negligent or reckless manner”. 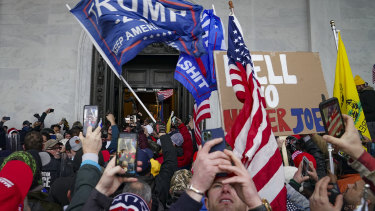 The violent crowd supporting Donald Trump riot outside the Capitol in Washington.Credit:AP

Trump’s lawyers resisted having him sit for the deposition. While he was in office, they argued that there must be “exceptional circumstances” to depose a high-ranking government official.

Bronx Judge Doris Gonzalez, who is presiding over the case, rejected that argument, saying it didn’t apply because Trump was being called to answer for conduct outside of office.