Over the long months of Victoria’s second wave of COVID-19 infections, Melburnians' spirits have soared or slumped with each day's release of case numbers.

But Chief Health Officer Brett Sutton has a message of hope for those fretting on our chances of cracking the crucial five-cases-a-day threshold for moving to the next stage in the road map out of lockdown. 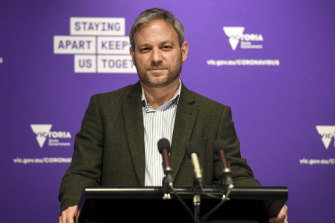 Professor Sutton said on Wednesday that he and his colleagues had moved, as case numbers dropped towards single digits, to placing greater weight on the "story" behind each diagnosis, and confirmed they were prepared to be flexible on that magic number.

He said the raw daily case numbers were now less important for the big-picture decisions than the origin of each individual infection and whether it could be tracked and traced.

"It’s the most prominent criteria," he said. "We will absolutely look to those mystery cases in particular and those sporadic … individual community cases which are often mystery cases."

Looking ahead to the next step on Melbourne’s long and careful road out of lockdown, Professor Sutton said we might make it without achieving that much-maligned target of a rolling 14-day average of five cases per day.

"We want to get below five, but [if] it’s above five and the great majority of those cases are known, contained, linked and we’re confident about the control measures in place, then we might accept that as a threshold for a move to another stage," he said.

However, he is not budging on his insistence on very few, if any, mystery cases before the city opens up and will not advise further opening if he sees more than five diagnoses of unknown origin over two weeks.

30/09/2020 World News Comments Off on Don’t sweat on the famous five – it’s the mystery numbers that count: Sutton
Lifestyle