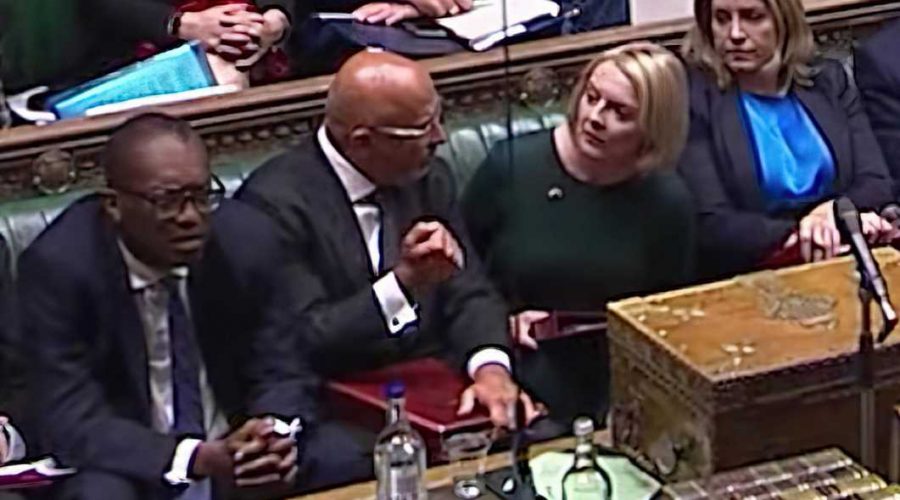 LIZ Truss said “the whole country will be deeply concerned by the news from Buckingham Palace” just moments after being publicly told about the Queen's ill health.

The Prime Minister was in the House of Commons when a stone-faced Nadhim Zahawi rushed to the frontbench to pass her a note before having an intense whispered chat. 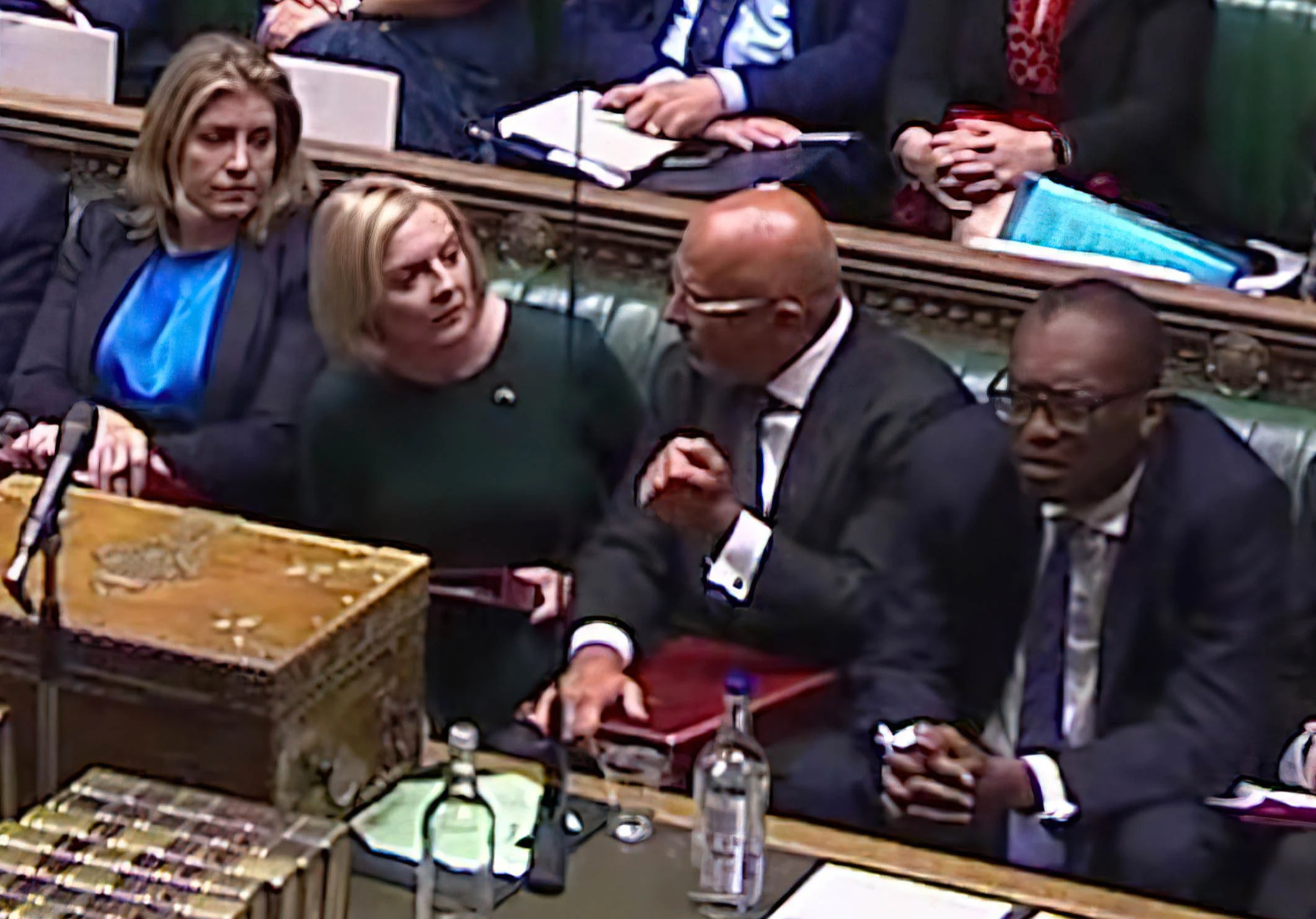 Follow all the updates on The Queen on the Sun's live blog.

Struggling to contain her shock, Truss attempted her best poker face under the gaze of hundreds of MPs and dozens of  journalists.

Ms Truss had just delivered her landmark energy bailout speech, with Sir Keir Starmer on his feet responding at the opposition despatch box.

But all eyes were quickly on the Cabinet Office minister as he then scuttled to the Speaker’s Chair to inform Sir Lindsay Hoyle of the news emerging from Balmoral.

By now MPs were restless, clearly sensing the urgency of his errand; some began texting reporters who were watching from the Press Gallery to find out what was going on.

Word soon ripped around the green benches that something had happened.

While Starmer continued through his speech, neither front bench appeared to be paying much attention.

Zahawi caught the eye of Angela Rayner, with the pair stepping out of the chamber for a 45-second whispered chat.

A note was hastily put in front of Sir Keir, who having read it was put off his stride and rattled through the rest of his speech. 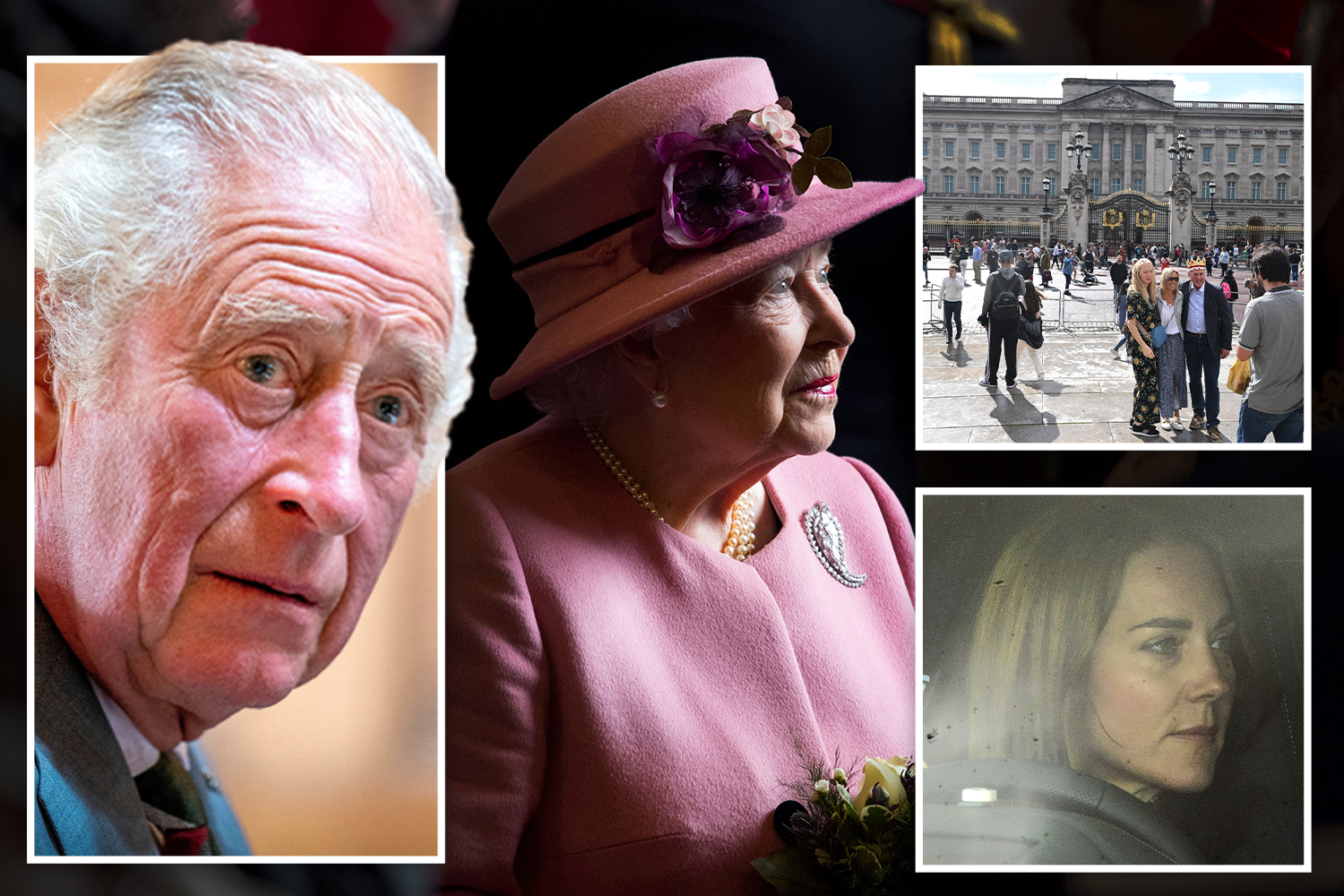 But it was a moment that 10 Downing Street feared could be coming, ever since Truss returned from Balmoral on Tuesday afternoon.

Incoming aides had been discreetly told by civil servants when they arrived on Tuesday to bring a black suit and tie to work by Wednesday morning.

The “flag operative” was today spotted entering the backdoor door of No10 – ready to lower the flags to half mast at short notice.

Truss was the last person to see the queen in public when she swore her in as PM on Tuesday  afternoon at Balmoral.

The pictures released of the traditional “kissing the hand” ceremony had sparked concern at Her Majesty’s frailness, but the speed at which things worsened caught the PM off guard.

She said earlier today: “My thoughts – and the thoughts of people across our United Kingdom – are with Her Majesty The Queen and her family at this time.”

Shortly after the statement went out from the Palace at 12.32, the Speaker interrupted a speech by Scottish nationalist leader Ian Blackford to tell MPs: “I know I speak on behalf of the entire House when I say that we send our best wishes to Her Majesty the Queen and that she and the Royal Family are in our thoughts and prayers at this moment."

Resuming his speech, Mr Blackford said he was "saddened" to hear the announcement made about the Queen's health.

Labour leader Sir Keir Starmer said he was "deeply worried" by the news from Buckingham Palace and added he was hoping for the Queen's recovery.

He tweeted: "Along with the rest of the country, I am deeply worried by the news from Buckingham Palace this afternoon.

"My thoughts are with Her Majesty the Queen and her family at this time, and I join everyone across the United Kingdom in hoping for her recovery."

The "prayers of the nation" are with the Queen, the Archbishop of Canterbury quickly added.

"May God's presence strengthen and comfort Her Majesty, her family, and those who are caring for her at Balmoral."

As the day went on in Parliament, MPs crowded around televisions in Commons bars, constantly refreshing Twitter on their phones for any scrap of news.

Former prime ministers David Cameron and Sir Tony Blair were amongst those sending messages of support on social media.

"I send my heartfelt thoughts and prayers to Her Majesty The Queen and the Royal Family at this worrying time," Mr Cameron wrote.

"My thoughts and prayers are with Her Majesty the Queen and her family at this worrying time."

Scottish First Minister Nicola Sturgeon added: "All of us are feeling profoundly concerned at reports of Her Majesty's health. My thoughts and wishes are with the Queen and all of the Royal Family at this time."

Commonwealth Secretary-General Baroness Scotland said: "Like everyone, I am deeply concerned to hear the statement from Buckingham Palace today. On behalf of every nation and citizen of the Commonwealth family, I send my best wishes to Her Majesty and the Royal Family. She will remain in my prayers."

And as American TV networks broke off from their schedules to air the news from Britain, US president Joe Biden told Liz Truss he was "keeping the Queen and her family in their thoughts", the White House said.

The president and the Prime Minister were taking part in a video conference about the war in Ukraine.

"President Biden also conveyed to Prime Minister Truss that he was following reports about Queen Elizabeth's health and that he and the First Lady are keeping the Queen and her family in their thoughts."

The US ambassador to the UK Jane Hartley added: "I join the people of the United Kingdom, the United States, and across the world in sending our thoughts and prayers to Her Majesty The Queen and her family."

Canada's Justin Trudeau, said: "My thoughts, and the thoughts of Canadians across the country, are with Her Majesty Queen Elizabeth II at this time. Were wishing her well, and sending our best to the Royal Family."

EU boss Ursula Von der Leyen added: "My thoughts and prayers are with her. She represents the whole history of the Europe that is our common home with our British friends, she has always given us stability and confidence, she has shown an immense amount of courage, and is a legend in my eyes."

While U.N. Secretary-General Antonio Guterres said his "thoughts are with the Queen, her family and the people of the United Kingdom at this time".